LONDON: The United Nations has said that more than four million Syrians have fled the country’s civil war, with many now despairing whether they will ever be able to return to their home country.

This infographic, put together by Global Post, puts the crisis in perspective: 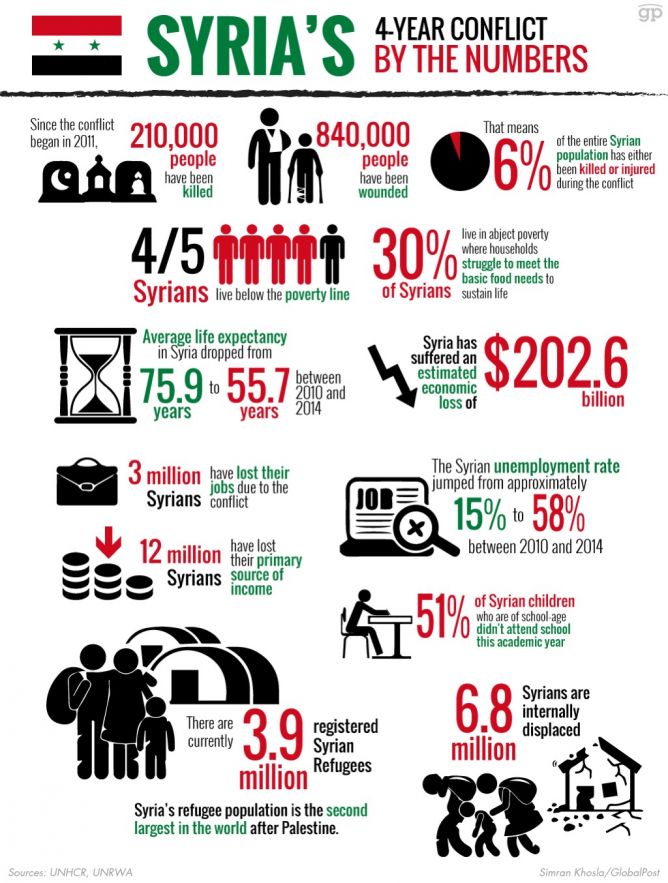 Recently, a report by a group of 21 aid agencies including Oxfam and Save The Children concluded that 2014 has been the “worst year” for civilians in Syria. Further, the report accused the United Nations for failing to protect civilian refugees.

The UN -- despite three Security Council resolutions adopted in 2014 that demanded action to secure protection and assistance for civilians -- has failed to ensure that much needed humanitarian assistance reaches the people affected by the conflict in Syria, that has now entered its fifth year, the report said.

Reports quoted Andy Baker, Oxfam's program manager on Syria, saying, "The Security Council's words now ring hollow. The last year has seen little concrete action from parties to the conflict and governments with influence to tackle the spiralling humanitarian crisis in Syria. What good is a resolution to a mother whose house has been bombed and children are hungry if it is ignored and undermined? It is time for powerful governments to stop fuelling the conflict, significantly scale up humanitarian assistance to meet people's immediate needs and push the warring parties towards a political solution. "Russia, the US and other states have the political and diplomatic influence to make the changes set out in the resolution real - there is no more time to lose."

"The bitter reality is that the Security Council has failed to implement its resolutions," said Jan Egeland, secretary general of the Norwegian Refugee Council (as quoted in a BBC report). "Parties to the conflict have acted with impunity and ignored the Security Council's demands, civilians are not protected and their access to relief has not improved," he added.

To provide context, UNHCR along with the Hamdi Foundation produced a video to provide an insight on the scale of the disaster. The video, titled "What if Manhattan..." asks: How would the world respond if the refugee crisis affecting the children of Syria were happening to the people of Manhattan.

As the video points out, 1.5 million of those affected are children. Children displaced by the war in Syria are the focus of another advocacy video -- produced by Save The Children -- that says, "Just because it isn't happening here, doesn't mean it isn't happening."

The video was released to mark the three-year anniversary of the conflict, in which, to date, 10,000 children have lost their lives and 2.3 million people have become refugees.

In a report titled “A Devastating Toll: The Impact of Three Years of War on the Health of Syria’s Children” by Save The Children, the broken health system in Syria and its consequences -- children dying not just from violence but also from related diseases -- were highlighted.

The report highlights the impact of the Syrian civil war on the country’s children. At least 1.2 million children have fled the conflict, and become refugees in neighbouring countries, while another 4.3 million children in Syria are in need of humanitarian assistance. Children have witnessed and experienced extreme violence, and more than 10,000 young lives have been lost as a direct result. The report draws attention to risk to life not just directly posed by violence, but also treatable and preventable diseases. Two hundred thousand Syrians have died of treatable chronic diseases such as cancer, asthma and diabetes – double the number killed by violence, states the report.

The illnesses affecting children in the troubled state include measles, diarrhea, and respiratory illnesses, all among the most deadly diseases worldwide for children aged under five. As one measure of how far Syria's health systems have fallen, the report states, in 2010, a total of 26 measles cases were reported in the whole of Syria for the entire year. In the first week of 2014, just in children aged under five, 84 cases were recorded in northern Syria alone.

Sixty percent of hospitals and 38 percent of primary health facilities throughout Syria are damaged or destroyed, making access to healthcare a key area of concern. Nearly half of Syria’s doctors have fled the country. Of the country's ambulances, 93 per cent have been damaged, stolen or destroyed, while many health workers and medical staff have been killed, imprisoned, or have fled the country altogether. The production of drugs has fallen by 70 percent. “This is more than a crisis. It is the threatened collapse of an entire health system, which endangers the lives and well-being of millions of children,” the report states.

The report states that vaccine programmes in Syria have collapsed, with a peacetime coverage rate of 91% falling to 68% just a year after the conflict began; “this rate is likely to be far lower today,” it states. Deadly diseases like measles and meningitis are on the rise. Even polio, which was eradicated across Syria in 1995, is now being carried by up to 80,000 children across the country.