Just 10 % Of World Military Spending Would Wipe Out Global Poverty

NEW DELHI: New data by Stockholm International Peace Research Institute (SIPRI) notes that world military expenditure totalled almost $1.7 trillion in 2015, an increase of 1 per cent in real terms from 2014. Interestingly, SIPRI also noted that military expenditure amounted to 2.3 percent of global gross domestic product — and 10 percent of this would be enough to fund the global goals agreed upon by United Nations' 193 member states in September to end poverty and hunger by 2030.

A combination of high oil prices and new oil discoveries and exploitation has contributed to a surge in military spending in many countries around the world in the past decade. However, the crash in oil prices that started in 2014 has begun to reverse this trend in many oil revenue-dependent countries. Further cuts in spending are expected in 2016.

(–64 per cent) and Angola (–42 per cent). Decreases were also recorded in, among others, Bahrain, Brunei, Chad, Ecuador, Kazakhstan, Oman and South Sudan.

Despite declining oil revenues, several other oil-exporting countries continued to increase military spending in 2015. Many of these countries—notably Algeria, Azerbaijan, Russia, Saudi Arabia and Viet Nam—were involved in conflict or faced with heightening regional tensions. However, Russia’s expenditure was lower than projected in its budget, and Saudi Arabia’s spending would have fallen but for the additional $5.3 billion cost of its military intervention in Yemen. Russia and Saudi Arabia are planning cuts in 2016.

Decline in Western military spending coming to an end?

Military spending in North America and Western and Central Europe has been decreasing since 2009, largely as a result of the global economic crisis, as well as the withdrawal of most US and allied troops from Afghanistan and Iraq. There were signs in 2015, however, that this decline was coming to an end.

Taken together, spending in Western and Central Europe was down by just 0.2 per cent in 2015. However, in Central Europe alone spending was up 13 per cent. There were particularly large increases in countries bordering Russia and Ukraine—namely Estonia, Latvia, Lithuania, Poland, Romania and Slovakia—which are those most concerned about Russia’s intentions following the crisis in Ukraine. In contrast, Western European expenditure was down 1.3 per cent but this was the lowest rate of annual decline since the start of the recent fall in spending, which began in 2010. The United Kingdom, France and Germany have all announced plans for modest spending increases in the coming years sparked by concerns about Russia and the threat posed by the Islamic State.

‘Military spending in 2015 presents contrasting trends’, said Dr Sam Perlo-Freeman, head of SIPRI’s military expenditure project. ‘On the one hand, spending trends reflect the escalating conflict and tension in many parts of the world; on the other hand, they show a clear break from the oil-fuelled surge in military spending of the past decade. This volatile economic and political situation creates an uncertain picture for the years to come.’

In reference to military expenditure and funds needed to tackle global poverty, Sam Perlo-Freeman, head of SIPRI's military expenditure project, told the Thomson Reuters Foundation, “"This gives some sort of perspective that can allow people to see what is the opportunity cost involved with global military spending.” "This could stir up some debate although we are certainly not expecting a 10 percent cut in military spending at all," he said. "That is all about the politics of these countries."

UN figures show that 800 million people in the world live in poverty. On the one hand, spending trends reflect the escalating conflict and tension in many parts of the world; on the other hand, they show a clear break from the oil-fuelled surge in military spending of the past decade," Perlo-Freeman said. "This volatile economic and political situation creates an uncertain picture for the years to come."

India -- a country where poverty is very much a reality -- figured sixth in SIPRI’s list of big military spenders. 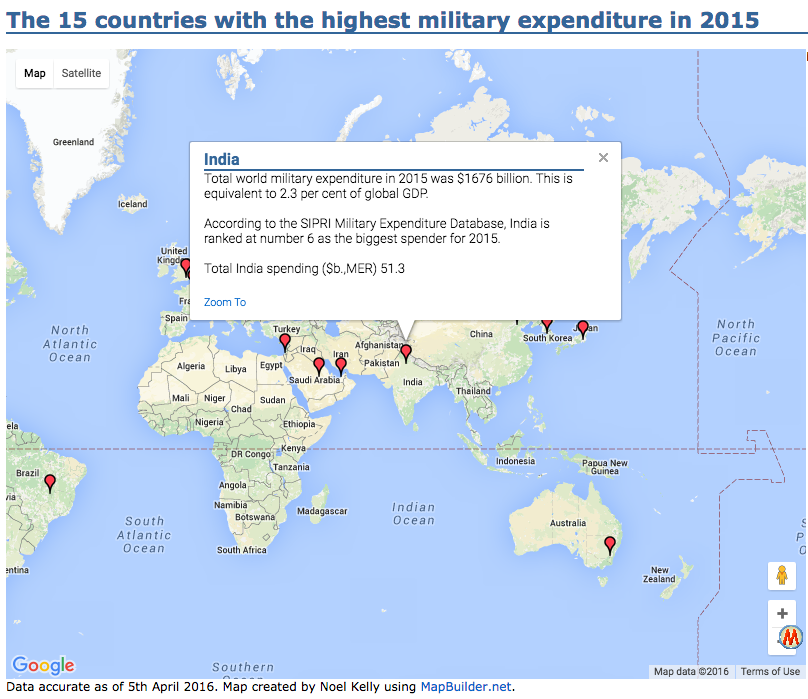 Why Haven’t the Shudras Got a Nobel Prize So Far? 1 hour ago

The Tone and Tenor of ‘Secular’ Today 1 day ago

Self-Reliance in Weapons and Military Equipment 1 day ago