Why Is The Hindu Sena Praying For Donald Trump?

NEW DELHI: At a campaign rally in Delaware, Republican presidential candidate categorically attacked American outsourcing, adopting a crude caricature of the South Asian accent whilst doing so. The impersonation and attack was met by loud cheers from Trump’s supporters. Yet, despite Trump’s clear disdain for people of India in specific, and racist, offensive remarks in general, a small right wing Hindu group is now literally praying for Trump’s victory.

The Hindu Sena is holding a spiritual ritual at Jantar Mantar, New Delhi, asking Hindus in the country to vote for the victory of Donald Trump in the US elections. “Going by the statements of Donald Trump, we believe he will be the lone protector of mankind,” Vishnu Gupta, Hindu Sena’s president, told Reuters.

Some Hindus in the United States have also rallied around Trump, organising themselves into a group known - aptly - as ‘Hindus For Trump.’

Trump’s rhetoric isn’t pro-India or pro-Hindu, in fact, it is the opposite of that with Trump constantly mocking minorities, and specifically attacking India in terms of American outsourcing.

The affinity with Trump, therefore, is explained by a banner that hangs above the Hindu Sena havan at Jantar Mantar. The banner says: "because he is hope for humanity against Islamic terror."

Fringe Hindu groups have long othered Muslims in India, and find a common ‘enemy’ in Islam with Trump. Trump’s incendiary comments on Islam in the world -- which have been sharply criticised by all quarters -- echo the sentiments of the Hindu nationalist movement in India.

In March this year, Quartz published an article that tried to draw parallels between Donald Trump and Indian Prime Minister Narendra Modi, whose Bharatiya Janata Party falls squarely within the Hindu nationalist rhetoric.

The article notes, “In both nations, the stigma attached to openly professing hatred for the “other” seems to be disappearing. Xenophobia is being embraced by at least a segment of the population that has taken its cue from Trump and Modi...”

“In the US, protesters have been shoved around, punched in the face and beaten up at various events—a phenomenon that has been absent from American politics for at least a generation. Referring to the bloodlust unleashed by Trump’s instigation, MSNBC anchor Rachel Maddow said, “We have seen this at the fringe… But this is now mainstream, frontrunner Republican national politics.” And in India, there has been a crackdown on dissenting youth, some bloody lynchings in the name of the cow, and “the anti-nationals are coming” kind of scaremongering....”

“It is true that Modi and other top leaders of the Indian government or the ruling BJP haven’t been seen indulging in Trump-ist instigation during the string of violent incidents—be it “beef lynchings” or the “nationalism” debate—that have rocked India since Modi took power. However, that could be deceptive. Calculated silence at the top during social crises is often a tacit approval of the lower rungs’ intrigue and provocation. And this has been rampant in the recent past, with even ministers and senior BJP members openly indulging in rabble-rousing or insensitive commentary during tinderbox situations…”

“When punctuated by chants of “USA! USA!” or “Vande Mataram”, the worst forms of bigotry gets camouflaged under nationalist jingoism. America and India now have top mainstream politicians who have mastered that lesson—adding a whole new spectre of political malevolence to the world…” 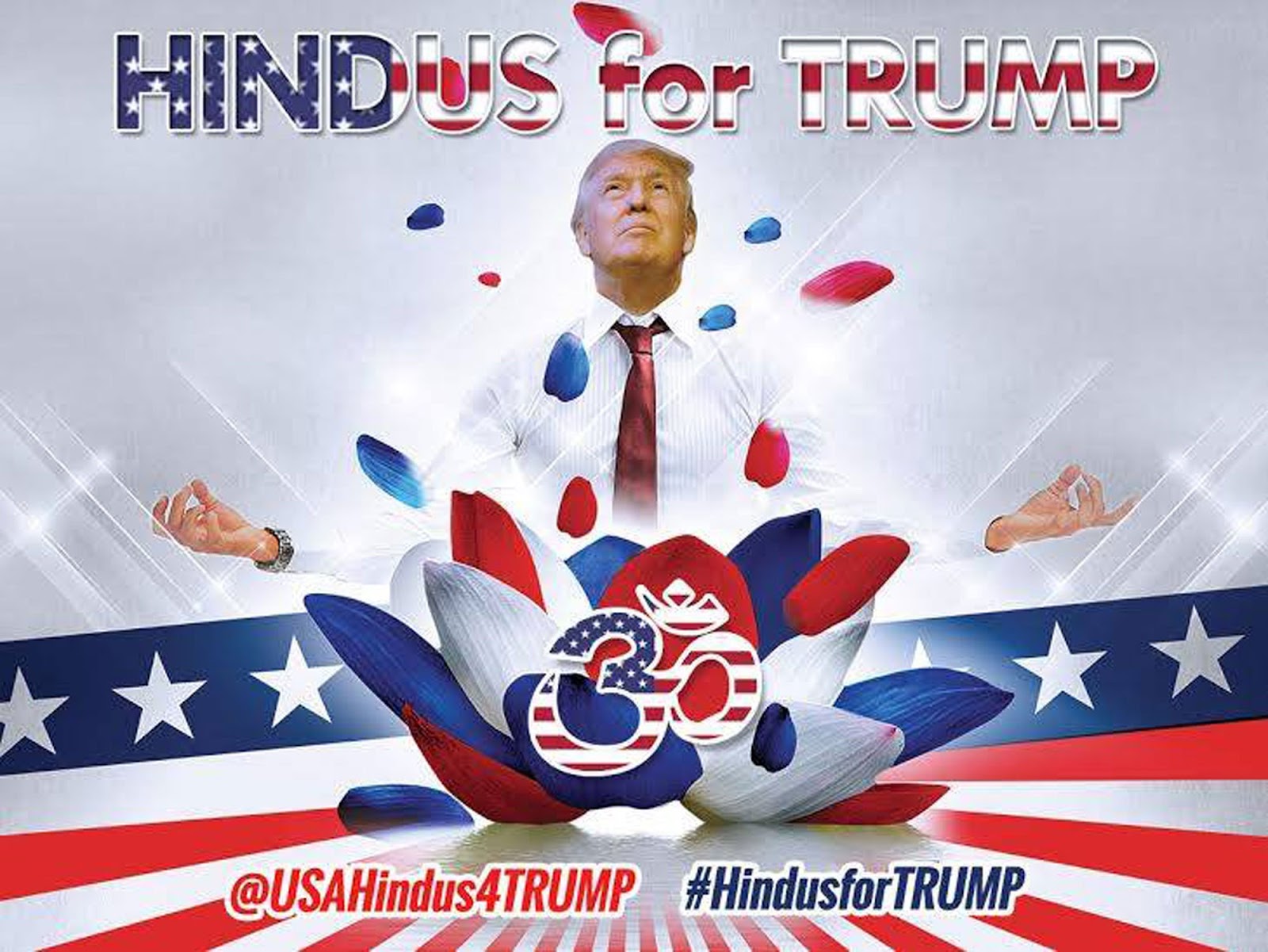 What’s relevant here is that by basing support on the narrow affinity rooted in opposing Islam, Hindu nationalist groups supporting Trump have have become the star examples of political irony.

V. Balachandran, in an article penned for The Citizen, wrote, “Some foreign policy greenhorns, especially from the US based “Hindus for Trump” have claimed that Trump, if elected, would be India’s “ally” to “deal” with Pakistan. Unfortunately their political maturity is such that they have landed themselves in a controversy of deifying Trump as a Hindu god in a lotus. They have forgotten that Trump who has been making discordant noises on US foreign policy had also told a Detroit debate on March 3 that US should keep its troops in Afghanistan to “protect Pakistan’s nuclear arsenal”. His whimsical campaign outbursts had provoked former CIA Director Michael Hayden to say that the American military would refuse to obey him if he gets elected and orders them to torture prisoners or kill the families of terrorists.”

The point is that the Hindu nationalist groups supporting Trump have no reason to do so -- given Trump’s hateful remarks and actions directed at the Indian community at large -- but in this case, the adage “the enemy of my enemy is my friend” is perhaps all that matters.