ISTANBUL (IPS): The World Humanitarian Summit held in Istanbul on May 23-24, failed to achieve its fund raising goals. With the exception of the German Chancellor Angela Merkel, none from the Group of the richest courtiers or of the UN Security Council attended. And the Summit could not mobilise the much-needed resources it had hoped for.

At the summit’s closing session, both Turkish President Recep Tayyip Erdogan and the UN Secretary General Ban Ki-moon expressed strong “disappointment” on the absence of leaders of the most powerful countries.

Though they reiterated their appeal for solidarity to rescue the most vulnerable people on Earth–130 million victims of conflicts and natural disasters and growing, none of them could hold out or offer any hope soon.

“Their absence (G-7 and Security Council leaders) is not an excuse for inaction,” Ban said. The resources required to rescue the lives of tens of millions of human beings represent only 1 per cent of the total world military expenditure, he added.

Ban showed no signs of optimism regarding an end soon of conflicts in Syrian, Yemen, South Sudan, among others, while recalling that every year the United Nations organised a pledging conference and “countries are tired of that.” He also stressed that currently 80 per cent of the UN humanitarian resources are spent on made-made crises.

For his part, Erdogan reiterated veiled threats to the European Union (EU), saying that if this bloc does not fulfil its agreements with Ankara, the “law of returnees” (refugees deported from EU countries to Turkey) may not be passed at the Turkish Parliament.

The EU promised Turkey 3.000 billions in 2017, to add to an equal sum promised last year, in its refugees deportation deal with Ankara, sealed in March.

The EU also is to authorise the entry to its member countries without visa. Nevertheless, thus authorisation will not be implemented soon as promised, as the EU now demands that Turkey fulfils a long list of requirements.

During the two-day summit, leaders of 173 countries, including 55 heads of state or government, promised to do more for the 130 million civilians who are victims of conflicts and natural disasters.

Nevertheless, the community of humanitarian organisations have shown scepticism about½ such announcements that would end up in effective commitments and if the expected funds will be employed in the right way.

Jan Egeland, Secretary General of the Norwegian Refugee Council (NRC), a leading humanitarian organisation with over 5000 humanitarian workers across more than 25 countries, was one of the strongest voices in this regard.

The humanitarian sector is failing to protect civilians from violence, Egeland said, while commenting how humanitarian aid has to be more efficient and cost-effective not to fail those most in need.

According to Egeland, humanitarian assistance does not reach thousands of victims who are among the most vulnerable of all. “In Fallujah, Iraq, there are now over 50,000 civilians who are besieged, prey to the Islamic State (IS), Engeland cited as an example.

“Nobody is helping them, nobody is reaching them, he warned. The Iraqi government is not helping them, the humanitarian organisations cannot reach them.”

There are thousands of victims like them who are in dire need but are not reached. In Yemen, Engeland said, there are 20 million civilians among the most vulnerable, while stressing that coalitions supported by Western countries are attacking civilians.

Egeland expressed hope that leaders can ask themselves if they can at least stop giving arms, giving money to those armed groups that are systematically violating the humanitarian law, and bombing hospitals and schools, abusing women and children. 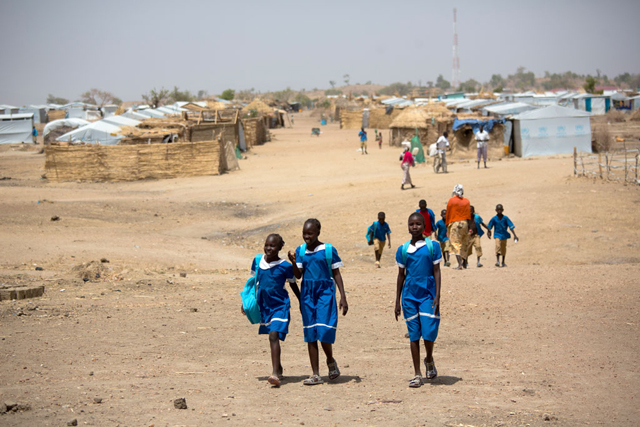 Fighting parties, be they governmental or militias or opposition or rebels, still get weapons that they use to blow up hospitals and kill civilians, he warned. “Let’s blacklist that armed group and that army and that government.”

The NSC Secretary General emphasised that “all borders should be open… in Europe, in the Gulf states… in the United States. “As Europeans, when we initiated the refugee convention we really felt that asylum was important when we were the asylum seekers. Why don’t we think it’s equally important now, when we are those to whom people come for asylum?”

From 2011 to 2013, he was the Europe Director of Human Rights Watch, prior to joining NRC where he took up his post as Secretary General in August 2013. In 2006, Time magazine named Jan Egeland one of the 100 “people who shape our world.”

“More resources are sorely needed… but more resources will not solve the problem,” said for his part Francesco Rocca, Vice-President of the International Federation of Red Cross and Red Crescent Societies.

Speaking on behalf of 190 national Red Cross and Red Crescent Societies, Rocca demanded more support to strengthening national and local actors, who are key to the solution.

“Strengthening local and national capacity would have an impact,” he said “Yet, scant resources have been channelled though those key local actors or invested in their long-term capacities.”

Peter Maurer, President of the International Committee of the Red Cross, warned, “the less we help in conflict zones, the more people will move,” and that “sticking people in camps is not the solution.”