What If Turkey Drops Its "Human Bomb" on Europe?

ROME (IPS): Will the rapid–though silent escalation of political tensions between the European Union and Turkey, which has been taking a dangerous turn over the last few weeks, push Ankara to drop a “human bomb” on Europe by opening its borders for refugees to enter Greece and other EU countries?

The question is anything but trivial—it is rather a source of deep concern among the many non-governmental humanitarian organisations and the United Nations, who are making relentless efforts to fill the huge relief gaps caused by the apparent indifference of those powers who greatly contributed to creating this unprecedented humanitarian crisis.

These powers are mainly the United States, the United Kingdom and France who, supported by other Western countries and rich Arab nations, led military coalitions that invaded Afghanistan and Iraq and who, along with Russia, have been providing weapons to most of the fighting parties in Syria.

Ironically, these four powers are permanent members of the United Nations Security Council.

Neither the above posed question is about a mere, alarming speculation. In fact, Turkish president Recep Tayyib Erdogan has recently made veiled, though specific threats to the EU, by warning against the consequences of Europe continuing to fail the two key commitments it made in exchange of the EU-Turkey refugee agreement —also known as “the shame deal”–, which the two parties sealed on March 22 this year.

The deal is about Turkey taking back the hundreds of thousands of asylum seekers who fled to its territories mostly from Syria, Iraq and Afghanistan and crossed from there to EU bordering countries like Greece. Once “re-taken”, the EU said it would “select” an undetermined number of asylum seekers, mainly Syrians.

In exchange, the European Union promised to pay to Ankara three billion euro a year, starting in November 2015, to share only a relatively small part of the big financial burden that Turkey has to face by providing basically shelter, food and health care to the repatriated asylum seekers. Turkey currently hosts three million refugees.

The EU also promised to allow Turkish citizens to access its member countries without entry visa, also as part of the “shame deal.”

The tensions between the EU and Turkey were made clearly visible on the occasion of the World Humanitarian Summit (WHS), which Turkey hosted in Istanbul on May 23-24, 2016, covering a big portion of its cost.

The WHS was meant to highlight the fact that human suffering has now reached unprecedented, staggering levels as stated to IPS by Stephen O’ Brien, the UN Under-Secretary-General for Humanitarian Affairs,Office for the Coordination of Humanitarian Affairs and Emergency Relief Coordinator (OCHA), as well as to call on world leaders to mobilise the much needed resources to alleviate this human drama.

For this, the UN submitted to the WHS a set of shocking facts: the world is witnessing the highest level of humanitarian needs since World War II, and experiencing a human catastrophe “on a titanic scale” as stated on IPS by the WHS spokesperson Herve Verhoosel: 125 million humans in dire need of assistance, over 60 million people forcibly displaced, and 218 million people affected by disasters each year for the past two decades.

The UN also quantified the urgently needed resources: more than 20 billion dollars needed to aid the 37 countries currently affected by disasters and conflicts.

And stressed that unless immediate action is taken, 62 per cent of the global population– nearly two-thirds of all human beings could be living in what is classified as fragile situations by 2030.

In spite of these staggering facts, none of the leaders of the most industrialised countries–the so-called Group of the 7 richest nations (G7), nor of the five permanent members of the UN Security Council, attended the World Humanitarian Summit.

The sole exception of German Chancellor Angela Merkel who had reportedly gone to Istanbul to meet Erdogan over the growing political tensions rather to participate in the Summit.

This absence of the top decision-makers of the richest countries has been widely criticised, starting with the UN secretary general Ban Ki-moon who on May 24 publicly decried it. Also Turkish president Erdogan expressed deep disappointment at such political boycott by world leaders.

Moreover, in a press conference at the closure of the WHS on May 24, Erdogan revealed that Europe had not met its promises as it had not provided the committed financial resources, nor kept its compromise to let Turkish citizens enter the EU without visa as from June this year.

He then expressed strong indignation, rather fury, over the set of 72 new conditions the EU has suddenly imposed on Ankara in exchange of suppressing the entry visa requisite for Turkish citizens. These conditions imply, among others, that Ankara changes its current anti-terrorist laws. 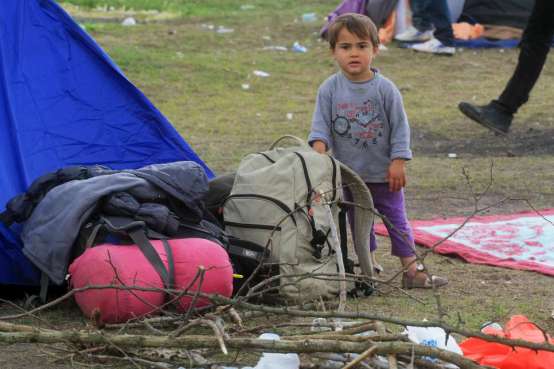 An Afghan child showing all his family’s belongings in front of their tent near Röszke. © UNHCR/Zsolt Balla

All this moved Erdogan to warn that of Europe does not honour its part of the refugee deal, the Turkish Parliament will not ratify it.

This simply means that Turley would not only stop allowing refugees to be forcibly returned to its territories, but that it would also permit more and more of them to cross its borders to the EU countries.

In the mean time, more and more organisations have been accusing Europe of sealing an immoral, unethical and, above all, illegal refugee deal with Turkey. But meanwhile Europe has been turning rapidly, dangerously towards far right parties and movements that are feeding hate, xenophobia and islamophobia.

Also meanwhile, tens of thousands of refugees and migrants are arriving to Europe, many of them drowning at sea, prey to inhumane practices and manipulation by smugglers.

Humanitarian assistance organisations such as Doctors Without Borders, Save the Children, the UN Children Fund, UN Refugee agency, among many others, have been warning that a growing number of unaccompanied children—estimated in 1 in 3 refugees and migrants, are crossing Mediterranean waters and European frontiers.

Only two days ahead of the World Refugee Day, marked on June 20, the UN secretary general visited the Greek island of Lesbos, which has become migrants’ entry point to Europe. There he called on “the countries in the region” to respond with “a humane and human rights-based approach, instead of border closures, barriers and bigotry.”

“Today, I met refugees from some of the world’s most troubled places. They have lived through a nightmare. And that nightmare is not over,” Ban told non-governmental organisations, volunteers and media.

The “human bomb” is ticking at Europe’s doors amidst an inexplicable passivity of its leaders.