No Medals for Sanitation at Rio Olympics

RIO DE JANEIRO (IPS): The biggest frustration at the Olympic Games, to be inaugurated in the Brazilian city of Rio de Janeiro on August 5, is the failure to meet environmental sanitation targets and promises in the city’s beaches, rivers, lakes and lagoons.

The opportunity to give a decisive push to the clean up of Rio’s emblematic Guanabara bay and its lagoons has been lost. The drive against waterborne pollution was part of the proposal which won the city the right to host the 2016 Summer Olympics.

This failure may hardly register in the awareness of residents and visitors, given the higher visibility of the urban transport projects and the revitalisation of Rio’s central district.

What happened confirms the national tradition of giving sanitation low priority on the government agenda. So far only half the Brazilian population has access to piped water, and only a small proportion of transported water is treated.

“The environment pays no taxes and neither does it vote, therefore it does not command the attention of our political leaders nor of society as a whole,” complained biologist Mario Moscatelli, a well known water issues activist in Rio de Janeiro.

The Olympic Park, which is at the heart of the Games of the XXXI Olympiad, was built on the west side of the city on the shores of Jacarepaguá lagoon, yet not even this body of water has been adequately treated. Filthy water from rivers and streams continues to flow into it all the time, Moscatelli told IPS.

Most of the foreign Olympic athletes and spectators from abroad will arrive in Rio at Antonio Carlos Jobim international airport, also known as Galeão. Planes touch down here on the edge of one of the most polluted parts of Guanabara bay, although visitors may not realise it.

The airport , on the western tip of Ilha do Governador (Governador Island), which was home to 212,754 people in 2010 according to the official census, is close to canals taking untreated effluent and rubbish from millions of people living on the mainland, brought by rivers that are little more than open sewers.

Fundão canal can be glimpsed from the southbound highway towards the city centre. It is full of raw sewage and bad smells in spite of recent dredging, because it is still connected to the polluted Cunha canal. 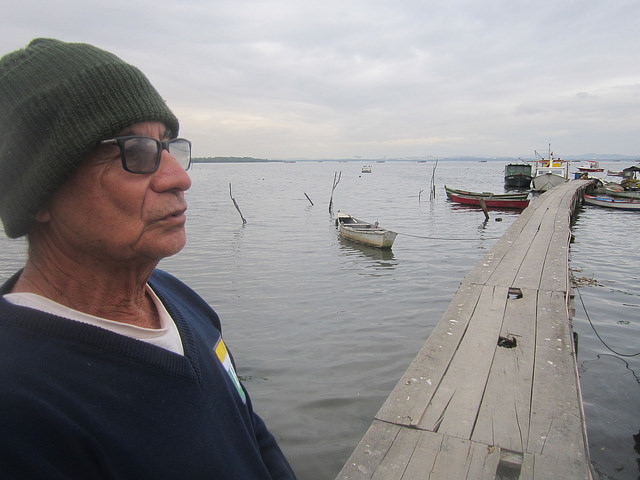 (Sergio Souza dos Santos stands on the jetty built by Tubiacanga fisherfolk to get their boats out into Guanabara bay, in the Brazilian city of Rio de Janeiro. Silting now makes it impossible to bring their boats close inshore, where decades ago there was a beautiful beach. Credit: Mario Osava/IPS)

North of Galeao airport, the fishing village of Tubiacanga illustrates the ecological disaster in Guanabara bay, which has a surface area of 412 square kilometres and stretches from Copacabana beach in the west to Itaipu (Niterói) in the east.

At the narrowest point in the channel between Ilha do Governador and the adjacent mainland city of Duque de Caxias, “there used to be a depth of seven or eight metres; but now at low tide you can walk along with the water only chest-high,” 66-year-old Souza, who has lived in Tubiacanga for two-thirds of his life, told IPS.

Landfills, silting by rivers and rubbish tipping have all reduced the depth of the bay, he said.

“Tubiacanga is at a meeting point of dirty water from tides rising at the bay entrance, from several canals including Fundão, and from rivers. Sediments and rubbish pile up in front of our village,” where the white sandy beach has become a quagmire and rubbish dump over the past few decades, Souza complained.

Guanabara bay receives 90 tonnes daily of rubbish and 18,000 litres per second of untreated waste water, mainly via the 55 rivers and canals that flow into it, according to Sergio Ricardo de Lima, an ecologist and founder of the Bahia Viva (Living Bay) movement.

Rio’s Olympic bid announced a target of cleaning up 80 percent of the effluents reaching the bay. The actual proportion achieved was 55 percent, Sports Minister Leonardo Picciani said at a press conference with foreign journalists on July 7.

“I only believe in what I see: out of the 55 rivers in the basin, 49 have become lifeless sewers,” said Moscatelli, voicing the scepticism of environmentalists.

The 80 percent target was not realistic; completely decontaminating the bay would require 25 to 30 years and sanitation investments equivalent to six billion dollars, André Correa, environment secretary for the state of Rio de Janeiro, admitted on July 20 at the inauguration of an “eco barrier” on the river Merití, one of the polluting waterways. 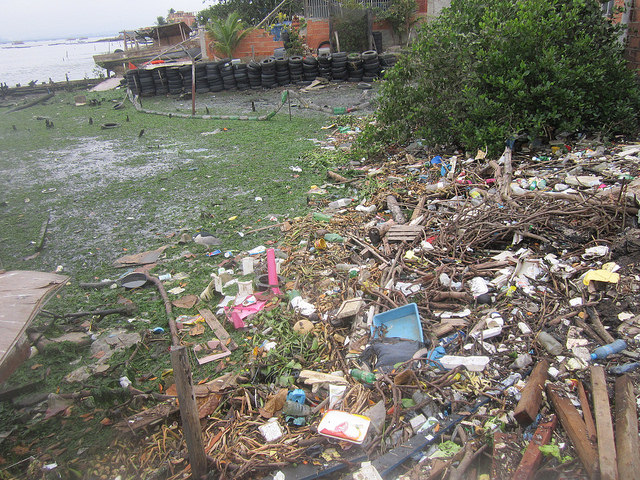 (Once this was a white sandy beach close to the fishing village of Tubiacanga, in Guanabara bay, near Rio de Janeiro international airport. The city’s population contributes to pollution and silting in this emblematic Brazilian bay. Credit: Mario Osava/IPS)

The barriers are floating interconnected booms that are an emergency measure to ensure that aquatic Olympic sports can take place in some parts in the bay. Trash scooping vessels or “eco boats” collect the floating debris that accumulates against them and send it for recycling.

Seventeen eco barriers have been promised, but these will be woefully inadequate, and in any case they should be anchored where floating garbage is most concentrated, like Tubiacanga, not close to the Guanabara bay entrance where water sports will be held, Lima complained.

The barrier in the Merití river is suitably placed, in Lima’s view, but it is “palliative action only.” The real solution is to promote selective garbage collection at source, that is, in households, shops and industries, and recycle as much solid waste as possible, as stipulated by a 2010 law.

“At present only one percent of the garbage produced in the Rio de Janeiro Metropolitan Region (which has a population of 12 million) is recycled,” Lima said.

Cleaning up Guanabara bay is a longstanding ambition. It was the goal of a project begun in 1995 that has already cost the equivalent of three billion dollars at the current exchange rate, but that has not prevented environmental deterioration of local beaches and water resources.

Pollution of the bay is exacerbated by oil spills. There is a refinery and petrochemical hub on the banks of the lagoon in Duque de Caxias; in addition, all along the Tubiacanga waterfront the bay is increasingly crisscrossed by pipes carrying crude oil, refinery subproducts and natural gas.

The effects of a large oil spill in January 2000 are still felt today. It had a direct impact on Tubiacanga and on the fish catch.

“We fisherfolk are the ones who suffer most from the consequences of pollution, and who best know the bay; but we are not listened to, we are penned in and threatened with extinction,” said Souza dos Santos, who is encouraging his four sons to take up trades other than fishing.

(Cover Photo: Raw sewage stains in Jacarepaguá lagoon alongside the Olympic Park, where the Olympic Games are to be held August 5-21 in the Brazilian city of Rio de Janeiro. Foul mud was to be dredged from the lagoon but this was not carried out because of funding cuts. Credit: Courtesy of Mario Moscatelli).