UNITED NATIONS (IPS): The landmark UN summit on refugees and migrants was supposed to help resettle one in ten refugees, instead UN member states have settled for vague gestures, including a campaign to end xenophobia.

Human rights organisations and humanitarian actors alike have expressed disappointment with an outcome document agreed upon by member states in advance of the summit, which falls short of creating a binding, comprehensive framework to protect migrants and refugees.

“If global leaders adopt a resolution with some nice language – but so lacking in concrete commitments it fails to make any real difference to the lives of those fleeing war and conflict – they are merely fiddling while Rome burns,” Richard Bennett, Head of Amnesty’s Office at the United Nations, told IPS.

They say that the UN’s richer member states are missing a crucial opportunity to tackle xenophobia and racism by actually resettling refugees within their own borders.

“When you actually speak to refugees, the men with Kalashnikovs are pushing them away, but the men in suits are running away,” Arvinn Gadgil Director of Partnerships and Policy at the Norwegian Refugee Council told IPS.

“There seemed to be an appetite from member states to actually find a mechanism for responsibility sharing. Now – perhaps naively – we thought that was true, and we are of course disappointed. That was the one key output from the summit that we now seem not to be able to get,” said Gadgil.

Gadgil described the talks as a “race to the bottom,” entailing “systematic risk-aversion” and overwhelming concern for national self-interest. “There is very little reason to be optimistic,” he said, deploring states’ negotiations, which, he says, were governed by the “lowest common denominator of shame.”

Revealing a process in which member states stripped back meaningful promises to vague re-affirmations of shared responsibility, Bennett said, “there’s this enormous crisis, and these diplomats sit in New York discussing words which may or may not even be implemented… there’s a huge gap between their rhetoric and the reality.”

Numbers of displaced people remain at unprecedented levels globally, higher than ever before in the UN’s history. With around 65 million people forced from their homes, one in every 113 people is now either a refugee, asylum seeker or internally displaced person. 21.3 million of these people are refugees; 51 percent of refugees are children.

Yet even a clause on the detention of children was considered too controversial by some member states.
Karen AbuZayd, Special Adviser on the summit, explained that the implementation of children’s right never to be detainedhad been extremely contentious for some states and amended to the principle “for children seldom, if ever, to be detained.”

In an effort to address the broad issues created by human mobility, the summit will focus on both refugees and migrants, though discussing them side-by-side has proven controversial since migration is a less settled area of international law. Internally displaced persons will not be discussed, though there are approximately 45 million people currently displaced within national borders.

Around 86 percent of refugees reside in low and middle-income countries, such as Lebanon, Jordan, Chad, Turkey, and Nauru, where Australia holds refugees, including children, in offshore detention.

Criticising those states “who are continuing to put up borders and walls,” Bennett said, “there is no trigger mechanism; there are no concrete, objective criteria for deciding how a country meets its fair share… It’s a kind of ad-hoc approach, based on largesse, of whether a country offers resettlement places or money or not.”

The outcome document says that “in many parts of the world we are witnessing, with great concern, increasingly xenophobic and racist responses to refugees and migrants” – as well as the increasing acceptability of such attitudes. Yet states themselves perpetuate these attitudes by refusing to welcome people from different countries, even when fleeing violence and persecution.

On Monday Amnesty criticised the G20 declaration calling for greater “burden-sharing” with regards to refugees, calling this “callous hypocrisy” given that many G20 countries actively blocked efforts to resettle refugees. Moreover, the term itself ‘burden-sharing’ explicitly views refugees negatively. 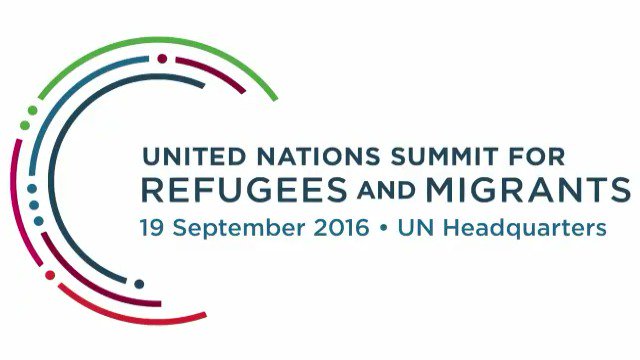 States, said Bennett, are “reluctant to set targets when it comes to taking and supporting refugees because there is a toxic narrative about migration and refugees which affects national politics. Another concern we have about the outcome document of the summit is that it moves in the direction of securitisation – of seeing the movement of people as a security issue, and not that refugees will make societies more diverse and actually stronger.”

Last week Angela Merkel’s party, which has consistently acted as a moral force by resettling refugees, and refusing to bow to the xenophobic electoral strategies of parties in many European countries, lost a local election to far-right populist party Alternative for Germany.

Without wishing to read too much into a single local election, said Gadgil, “this could potentially be a watershed moment in European politics, where we end up with the definitive rise of parties that are primarily motivated by xenophobic views of the world, and primarily motivated by the artificial portrayal of immigrants as essentially and only bad.”

September 2 2016 marked the one-year anniversary of the death of three-year-old Alan Kurdi, whose picture moved publics to sympathy last summer, helping to individualise suffering on an enormous scale.

Author Chimamanda Ngozi Adichie was recently reported saying, “nobody is ever just a refugee,” emphasising the centrality of migration in human history at the UN’s World Humanitarian Day.

At the preliminary talks, however, Bennett said: “I didn’t really hear any countries give examples of actual refugee or migrant stories… for the states this seemed like an abstract, academic exercise.”

Narratives and public statements are doubtless indispensible tools in communicating every person’s humanity, but a more sustained level of attention is needed among policy-makers, who play a critical role in shaping public opinion, to bring about real change and uphold the rights and the dignity of refugees and migrants.

Speaking on Tuesday night in New York Médecins Sans Frontières’s Executive Director Jason Cone looked to the summit, saying, “ultimately it’s political leaders that have to step up and make these decisions… These are problems that are eminently solvable with the right resources directed towards them.”

The UN Summit for Refugees and Migrants will take place at UN headquarters in New York on September 19.

Hopes now turn to the Leaders Summit on Refugees, convened the following day by Barack Obama, where he will invite heads of state and government to make national, rather than collective, resettlement pledges.