U.N. Urban Summit Gives Rise to a Mixture of Optimism and Criticism

QUITO (IPS): Experts and activists greeted with a mixture of hope and skepticism the Third United Nations Conference on Housing and Sustainable Urban Development (Habitat III), which opened Monday Oct. 17 in the capital of Ecuador, and which seeks to produce a new urban agenda for cities and their inhabitants.

These voices are confident that the summit, which runs through Thursday Oct. 20, will contribute new elements to address the growing problems facing cities, such as inequality, violent crime, the effects of climate change and the lack of basic services such as access to clean water and electric power.

But on the other hand they fear that the participating countries will only pay lip service to commitments that will quickly be forgotten, as occurred after the first Habitat conference, held in 1976 in Montreal, and the second, which took place in Istanbul in 1996.

During the inauguration of the summit, U.N. Secretary General Ban Ki-moon pointed to the dark side of urbanisation.

“Urban areas are expanding rapidly, especially in developing countries, and that expansion is frequently unplanned,” he said. “Approximately a quarter of urban dwellers live in slums or informal settlements. Increasing numbers of poor and vulnerable people live in precarious conditions. They lack access to basic services and adequate living space.”

Meanwhile, host President Rafael Correa of Ecuador criticised land speculation and profiteering that have favoured only a select few.

“This is common in Latin America, as are the poverty and exclusion fuelled by the free market system; the poor do not exist for the market,” said Correa, who was elected Monday morning as president of Habitat III.

Advocates of the “right to the city”, a set of rights for urban dwellers, share that view.

“Huge problems in cities are exclusion, segregation and marginalisation. We have undesirable, unacceptable cities, which are a reflection of a failed system. Habitat III has the niches to address these problems,” Salvadoran activist Claudia Blanco told IPS.

Blanco, executive director of the Salvadoran Foundation for Development and Low-Income Housing (FUNDASAL), was taking part in Towards an Alternative Habitat 3, a parallel forum that brought together academics and activists at the Latin American Faculty of Social Sciences (FLACSO). 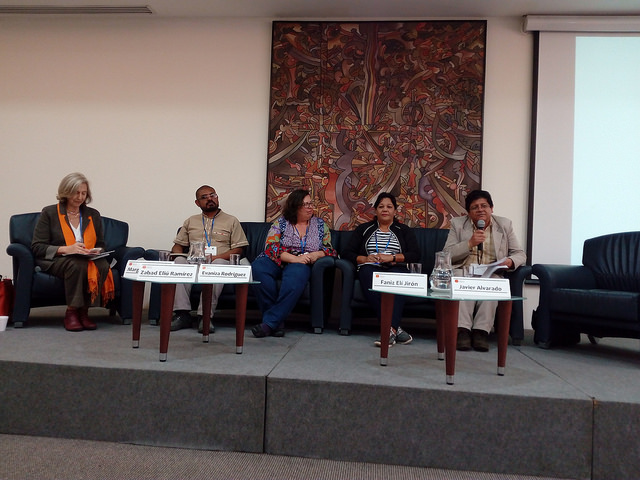 (Activists from a number of countries debate on Monday Oct. 17 about the role of social movements in the construction of cities and communities for all, at FLACSO. Parallel to the official Habitat III summit, Quito is also hosting an alternative summit and social forums that question government proposals and viewpoints with regard to urban planning. Credit: Emilio Godoy/IPS)

Blanco said: “The place where you live does matter; many Salvadoran young people can’t get a job because of where they live, even though they have talents and skills.”

FUNDASAL works with housing cooperatives and other civil society groups in a country which has a shortage of an estimated 450,000 homes.

Habitat III, organised by U.N. Habitat, has drawn some 50,000 delegates of governments, non-governmental organisations, international bodies, universities and companies, and will produce the “Quito Declaration on Sustainable Cities and Human Settlements for All”, also known as the New Urban Agenda, to guide political action over the next 20 years.

In this document, still subject to final negotiations between the states, governments pledge to fight poverty, inequality and discrimination, improve city planning, and build cities with resilience to climate change.

The debates in Habitat III are taking place in an area in central Quito, a city of 2.6 million people, with high walls and heavy security.

A people’s social summit is also being held, Resistance to Habitat III, which has drawn NGOs from around the world, to discuss issues such as the rejection of evictions and defence of the right to the city and other urban rights.

Rodrígues told IPS that what was needed was “a renewed approach to the right to the city, and an understanding of territory as a common good,” and questioned civil society’s limited participation in drawing up the agenda, “which the states do not want to discuss.”

The National Union for Popular Housing promotes access to affordable housing and seeks to influence the design of legislation and public policies in a country with a shortage of around seven million homes.

Of the 641 people in Latin America and the Caribbean, 80 percent live in urban areas, and at least 104 million are slum-dwellers.

For Horacio Corti, the chief public defender for Buenos Aires, the New Urban Agenda is too “generic” and should be more precise.

Corti, who presented his book “Right to the City, Cultural Rights, Culture of Rights” at the alternative summit on Monday, said that if it were possible to achieve the right to the city in Latin America, “why not think of building a consensus on the right to justice?”

In the Quito Implementation Plan for the New Urban Agenda, social and academic organisations and companies have already listed 52 urban projects, including initiatives in Brazil, Chile, Colombia, Ecuador and Mexico involving issues such as air quality, sustainable building and resilient design.

As the negotiations on the Quito Declaration prepare to wind up, the Morocco-based non-governmental Habitat International Coalition is preparing its own statement for Tuesday Oct. 18 while the alternative forum will release its own declaration on Wednesday or Thursday.

According to Blanco, the summit should not result in “a prescription, because the social production of habitat is a process, not a product”.

The activist said the strength for making the commitments a reality “lies in us”, not in the governments. “We can focus the debate on promoting the social production of Habitat, but that requires long-term solutions,” she said.

For her part, Rodrígues said “public policies have to address rights,” and thus, “the agenda is a call to work for our rights and to face the conflicts that will arise. The city has to be acknowledged as a common good.”

Corti said “spatial injustice” is reflected in “territorial injustice”, as exemplified by speculation in real estate and building of unconnected and unsustainable houses.

“Without social and urban justice there is no citizenship,” he said.