In the first month of 2018, Haryana again faces a law and order breakdown

22 January 2018. A 22-year-old-woman is gang raped in sector 56, Gurgaon while her husband was held at gunpoint. The couple along with the nephew of the husband was returning from a family function.

21 January 2018. A construction worker and mother of two children, the 27-year-old woman was raped in Indira Colony Area, Rohtak.

An 18-year-old girl was raped by a 24-year-old youth in Ladwa town of Kurukshetra district.

16 January 2018. In an utterly shocking incident in Hisar district, a 3-year-old girl was raped by a 14-year-old neighbor.

15 January 2018. A 20-year-old woman was pulled into a car by the two men when she was waiting for a bus near the Khandewala village. She was raped in the moving car in Farrukhnagar area.

14 January 2018. The semi-naked body of a 11-year-old girl was recovered on Sunday in Panipat district. The girl went missing on Saturday morning. Two accused arrested by police reportedly admitted to trying to have sex with the corpse after murdering the girl.

13 January 2018. A 10-year-old girl was brutally assaulted by a 48-year-old man near Pinjore. It has been reported that a wooden object was inserted in her private part.

13 January 2018. Three youths abducted a 23-year-old woman and gang raped her in moving car for 2 hours in Old Faridabad.

9 January 2018. A class 10th girl went missing on Tuesday and her half-naked body was found near the bank of a canal in Jind district. She was brutally assaulted, her private part mutilated and some of the vital organs ruptured. Being a bright student that she was, she dreamt of becoming a doctor. She has been dubbed as Haryana’s Nirbhaya.

With its skewed gender ratio, low literacy rate and often regressive Khap panchayats, Haryana hasn’t been particularly tough for women. The reality is quite opposite though. More often than not, the state comes into the national media limelight for gory criminal incidents, more so against women. It is in the first month of 2018 that the state again faces a serious issue of law and order breakdown where there is a clear case of inefficient administration at work. At least 10 incidents of rape have been witnessed in past 10 days which paints a bleak picture of situation of women in Haryana.

An attempt to explore the Haryana phenomenon would lead to several explanations including lower literacy rate, skewed female labor force participation rate, “vote bank” politics of patronizing powerful patriarchs, inefficient state administration and lesser degree of urbanization. It, however, is the accountability of government in power to curb criminal incidents and provide security to citizens. In this context the track record of Manohar Lal Khattar, 10th CM of Haryana, clearly seems to disappoint.

Khattar is part of the group of less-known BJP leaders parachuted as CMs after electoral victory by the Modi-Shah duo. A RSS pracharak for 14 years, Khattar earlier had stressed on limited freedom and the need for girls to dress decently in order to prevent rapes in his talk with IBNLive in the run up to October 2014 assembly election in Haryana. He also saw Khap rulings as a tool to help curb rape incidents.

While the 10 cases of rape in past 10 days is shaking the conscience of the media fraternity and would hopefully wake the Indian middle class from its slumber, an overview of NCRB (National Crime Records Bureau) data raises grim questions for Haryana government. An analysis of incidence of crimes committed against women in Haryana would show the inefficiency of state machinery to prevent such crimes during the reign of BJP government. It also needs to be pointed out that there is a strongly possible case for under reporting of incidents involving rape and sexual assault in Haryana due to the societal structure which rather questions the moral character of the savior instead of calling for action against perpetrators. 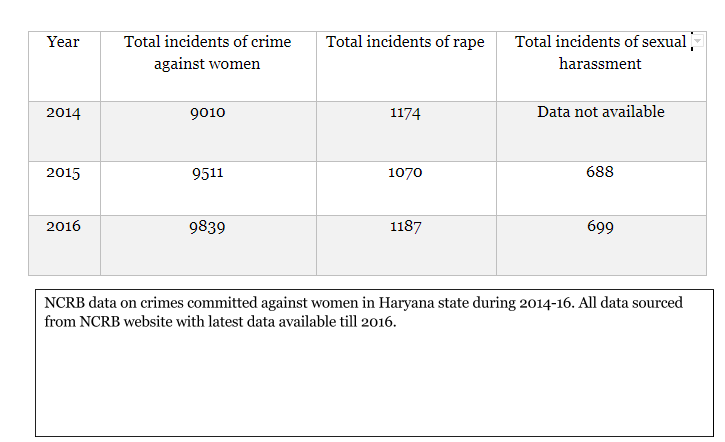 It wouldn’t be an exaggeration to state that there has been no considerable improvement in situation in the past 3 years of BJP rule in Haryana. In term of crime rate pertaining to women (number of cases registered under crimes against women per 100,000 female population), Haryana only ranked behind Telangana, Odisha, Assam, Rajasthan and Delhi which reported higher rate of crime against women in 2015. The crime rate for incidents against women in 2016 was 77.8 for Haryana placing it at 6th position among Indian states.

The ubiquitousness of sexual harassment cases in Haryana shows a male-dominated society managed by retrogressive norms which perhaps requires tuition in equality and women empowerment. But even more than that, the Khattar government needs to get its act together and take efficient measures to prevent the state from turning into a cesspit of male vultures hunting innocent women. Mere lip service of recommending capital punishment for raping girls below the age of 12 will not help improve the debilitating Law and Order situation in Haryana.

The Ignoble US Pull Out From Afghanistan 11 hours ago

Have US Sanctions Been Effective? 12 hours ago