In Search of Cursed Ghaseti

Once, a begum bloodied her hands with a nawab’s murder

From a little distance the old man appeared like a fakir, a darvesh with long white beard, embroidered cap and milky alkhalla or robe.

He was praying at the tomb of Shiraj-ud-Doulla at the Khushbagh grave complex in West Bengal’s nawabi town of Murshidabad.

Just 23 when he was murdered, Shiraj, the last independent Nawab of Bengal, has slept here the last 262 years.

Khushbagh marked the beginning and end of Shiraj’s brief nawabi. Here, on 9 April 1756, he prayed at the grave of his maternal grandfather Nawab Alivardi Khan on becoming Nawab of Bengal. Fifteen months later on 2 July 1757, he was buried here.

Murshidabad always attracted me not because it was the city from where the British East India Company began its rule over Hindustan, but for Ghaseti Begum: one of the most thrilling chapters of history.

History says little about her, but I knew local tales could reveal a little bit more than what we get in the history.

Can you imagine, she conspired to murder Shiraj and gave Bengal on a platter to Robert Clive?

She wanted to become the first woman ruler of Bengal. And that was not possible without killing Shiraj.

As the old man finished his prayer, I approached to him. I knew that very old people are the best sources of untold stories about historical characters in the town where they live. Naturally, he must have heard much about Ghaseti from his ancestors.

He, however, behaved very strangely. Instead of talking he gave me a steely-stern look and walked away.

I was shocked, surprised.

“When Ismail Khan himself could not get an answer to one single question about a woman all his life, how can he answer your questions? Na mumkin – Impossible!”

Taken aback, I turned to find a man standing behind me. He was Noor Hussein, part time mali (gardener) of the Khushbagh grave complex. He had seen me moving towards that man, and thought of warning me as he knew Ismail would shower gaali (abuses) on me instead of answers.

Why? I asked him.

“If anybody asks Ismail questions about Murshidabad, he turns red hot as he thinks the ghosts of Ghaseti and other such dhokhebaaz – betrayers – like Mir Jafar, Jagat Seth, Omichand, Yar Lutf Khan and Rajballabh have been haunting this town since 1757: the year of the Battle of Plassey.” 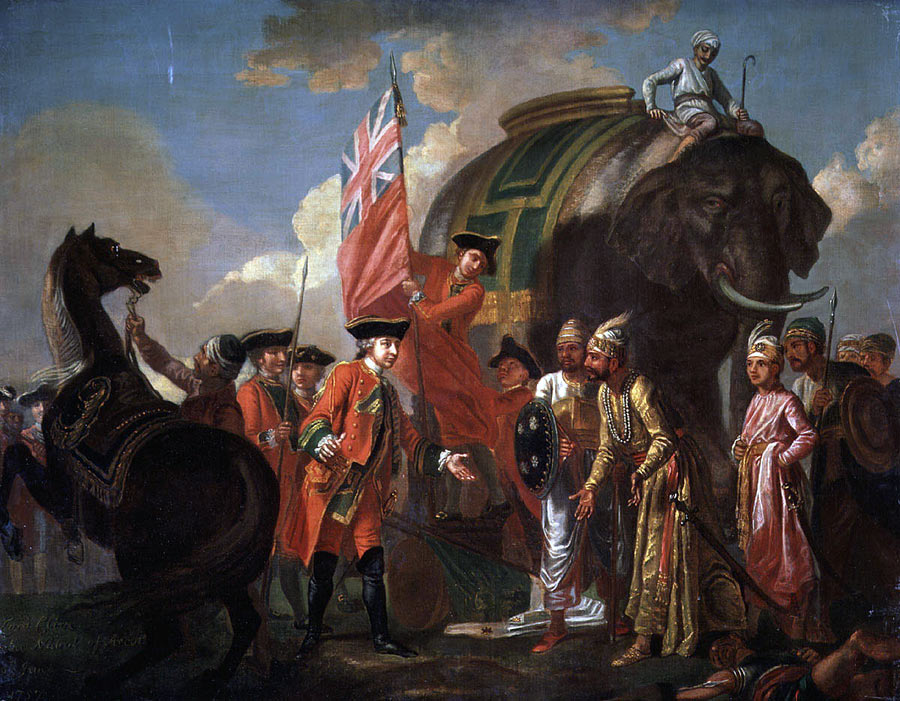 In fact, the people of Murshidabad still blame them for inviting the firangis to capture Bengal. Ghaseti and Mir Jafar are unofficial words for ‘traitor’ in the Bengali dictionary. Both are cursed characters in this town.

“But you just said Ismail himself was after an answer, about a woman! Who was she?”

I virtually fell from the sky. My Murshidabad visit concerned that lady. And when I eagerly asked Noor if he knew some hidden facts about Ghaseti, he said the best person to ask was Ismail. The women of his family had served as maids in the royal family of Alivardi Khan, and some had attended on the Begum herself.

Noor said the eccentric Ismail and he lived the same ancient Muslim mohalla of Murshidabad where their ancestors came from Agra in the days of Emperor Humayun.

“What’s the single question on Ghaseti Begum that he is after?”

“Is it that Ghaseti’s ghost possesses the women of this town, compelling them to betray?”

“And who was Amina?”

“She was once the wife of Ismail! When Ismail was 22, 16 year old Amina deserted him to elope with another man to Bardhaman. Ismail spent his entire life searching for the answer: What was the need for Ghaseti to soak her hands in Shiraj’s blood, and why did Amina betray me?”

I knew I was stepping down through the labyrinths of Murshidabad’s violent history, at the end of which I might meet Ghaseti Begum. I had no interest in Amina but was curious about Ismail whose ancestor Abdul Razzak had fought in the Battle of Plassey.

Noor said I should meet Ismail at his house located near Motijheel, where Ghaseti once lived and used her royal palace as the nerve centre of conspiracy.

In the dead of the night Robert Clive, Eyre Coot, Mir Zafar, Jagat Seth, Omichand, Yar Lutf Khan, Khadim Hussein Khan and Rajballabh entered her palace to weave the cobweb of Hindustan’s most atrocious conspiracy: the Battle of Plassey.

All had their kuthis or offices in Murshidabad, then capital of Bengal. They fought among themselves to gain the lion’s share of trade in Bengal, with the East India Company finally emerging victorious after the Battle of Plassey.

Childless, she spent her riches to buy traitors against Shiraj as she herself wanted to become the ruler of Bengal after her father’s death, or install someone else in place of Shiraj as Nawab of Bengal in case she failed in the first instance.

And to conspire against her own chosen man, in the second instance, to grab the seat of power.

As conspiracies were being hatched in Motijheel, midnight plots were also being woven at the home of Mir Jafar. Part of the plot was against none other than Ghaseti.

Did she know it? Possibly not!

What a strange coincidence, that to enter Mir Zafar’s palace you have to cross Namak Haram Deuri: the gate of betrayal. This gate poses the world’s greatest riddle of history. This gate changed the very history of India. 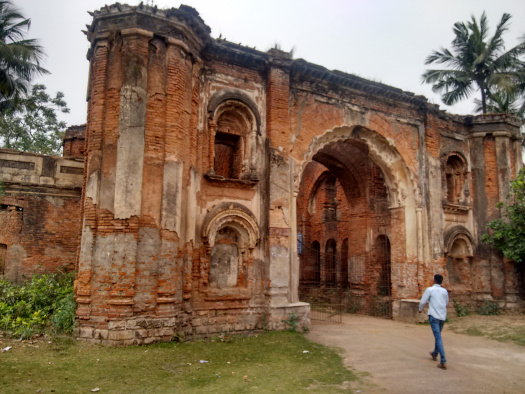 For how could a business establishment like the Company become ruler of a nation? Would the firangis have allowed merchants to rule Great Britain?

Stories of the 1757 conspiracy reverberate through Murshidabad even today, with Mir Jafar and his son Mir Miran their focal point.

Incidentally, the first “elected” President of Pakistan, Sahibzada Iskander Ali Mirza who was born in Murshidabad, was a descendant of Mir Jafar. A section of Pakistanis still hold him responsible for the present political instability in that country.

Talking to Noor, I was so lost as to forget that night had already descended stealthily. After getting Ismail’s address, I left for my hotel.

Next morning I came to Motijheel where the “secret room” of Ghaseti still exists. People say her gold and jewellery are buried here. Anybody trying to pry into it dies under mysterious circumstances. A firangi once tried to break open her room but died vomiting up blood.

After wandering for about 15 minutes in the Old Karbala area, I finally found Ismail’s ancient, dilapidated house. He was sitting outside in a wooden chowki or cot.

Without minding his words, I sat down beside Ismail appealling to him to tell me unknown facts about Ghaseti. Lucky that I was, he took me inside his living room and began.

“She wove conspiracies and kept them so secret that neither Alivardi nor Shiraj knew about them in their lifetimes,” Ismail said. Ghaseti practically fixed Shiraj’s fate the day he became Nawab of Bengal.

Ghaseti passed on all the secret information she could about whatever was happening in the Nawab’s family to Clive. “But what did she gain? Could she become ruler of Bengal?” said Ismail as though asking someone invisible.

After Shiraj’s murder, Mir Miran realised Ghaseti Begum was the biggest obstacle to the continuance of his father’s rule. Naturally, she would have to be murdered.

Abdul Razzak, ancestor of Ismail, died around 8 AM when the war began. He was in the Nawab’s fauj (army) that had started firing artillery targeting the British.

Lasting about eight hours, it was not a conventional war as the outcome was virtually written on the wall, thanks to treachery. Could the Nawab’s fauj comprising 50,000 men and 53 cannon be defeated by the Company’s 3,000 soldiers?

Utterly impossible! That is why Robert Clive himself had observed: “Even if the local people had brick-batted or attacked the Company’s force with sticks and swords, they would have been defeated.” 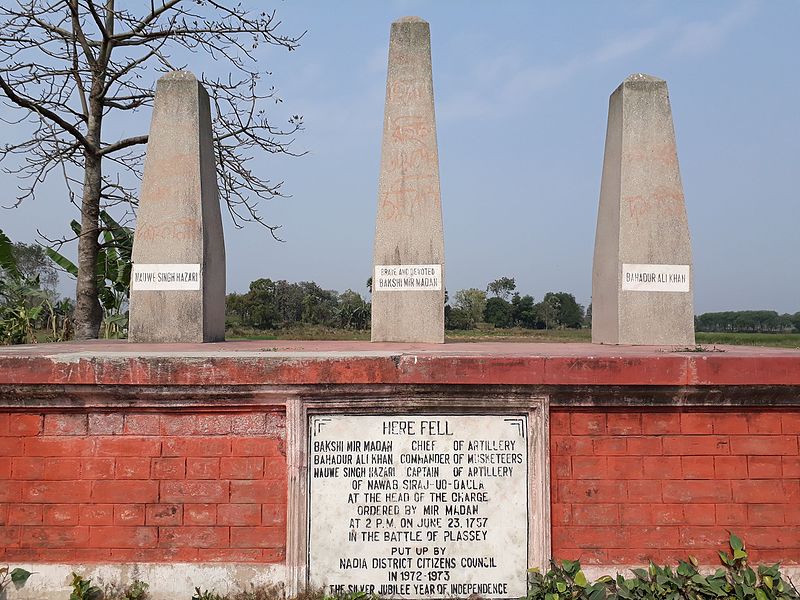 Suddenly I awoke to Ismail’s question. He was right. It was not possible without treachery.

What Happened to the Traitors?

Would you believe that all the traitors died most tragically?

Mir Jafar died of leprosy while his son Mir Miran who ordered Shiraj’s murder died of a lightning strike.

Jagat Seth was put in a sack and thrown into a river in Munger, Bihar by Mir Qasim who became nawab after Mir Jafar. Also part of conspiracy, Mir Qasim died a pauper in Delhi.

Omichand was deceived by Clive and did not get the 5% treasure promised him. That went to Mir Jafar instead. He lived for 10 years after the battle and died a madman. The Company had confiscated all his properties and he died penniless.

Ghaseti was drowned in the Dhaleshwari river on the orders of Mir Miran.

“Mian! Yeh Murshidabad ka dusra naam hai dhokha…” (The other name of Murshidabad is betrayal…) So said Ismail as I was stepping out of his house to go to Khushbagh to meet Noor.

“And what happened to Amina?” I posed this question to Noor Hussein, not Ismail.

He said Amina’s husband drowned her in a river for betraying him. She had again fallen in love with another man.