‘I hope young people will see the support offered and dream big.’

There is an urgent need to create spaces where queers are safe from heterosexual violence in the online and offline world, which some fiery-spirited individuals and organisations have made it their mission to achieve. Whether a platform for queers to share their stories, or secure housing without discrimination, these activists’ aim is to help the community feel safe, protected, and free.

One such platform is Pink List India. The country’s first archive of politicians supportive of LGBTQIA+ rights, the list marks a push to hold our public representatives to account.

Co-founders Anish Gawande, freelance designer Smriti Deora and journalist Devina Buckshee started with a list of Lok Sabha MPs who had publicly supported queer and trans causes; over time the website has come up with new ways to conceptualise queer politics.

Only 151 of 543 elected MPs have made public statements on queer and trans causes, according to their latest digital project the State of the QUnion, billed as India’s largest queer political archive.

Meant to hold MPs accountable, it also archives their homophobic, transphobic statements, and lists those MPs who chose to remain silent.

The founders of Pink List India told The Citizen how they plan to make it more inclusive and a safe space for everyone.

“Anish, Smriti and I started Pink List India as a space to archive queer politics, in 2019 as the Lok Sabha elections were underway. For the first time, queer rights were being spoken about in the mainstream since the reading down of Section 377 in November 2018. We wanted to carry forth that momentum and make queer issues a political imperative,” says Devina Buckshee.

For Anish Gawande, the Pink List “comes from a deeply personal space. For me growing up I was always in the closet, because there was no chance for somebody who’s gay to be able to make a future in politics. It was incredibly difficult with the idea that I would have to choose between my sexuality and my passion.”

Smriti Deora explains that their “primary focus now is the State of the QUnion. It’s a dynamic list, and it’s updated regularly so you can see the statements of politicians’ overtime.”

The SOTQ archive is presented as an interactive, user-friendly map, with two shades of pink, dark pink for the vocal, light pink for the silent. You can learn about your MP by outing their address in the search box. Report cards for each MP and a list of statistics are also available; every single statement made by the MPs is recorded too.

“It’s a list, not an endorsement. Because those who support LGBTQIA+ rights could well be homophobic, transphobic, casteist or misogynist.

Deora describes their recent project for Pride Month, where Pink List India collaborated with various queer friendly organisations in all the states, setting them up with queer artists to create a virtual exhibition for Pride.

“We want to make a community – we don’t want a million followers but high engagement, a lot of people believing in our work,” she tells The Citizen. 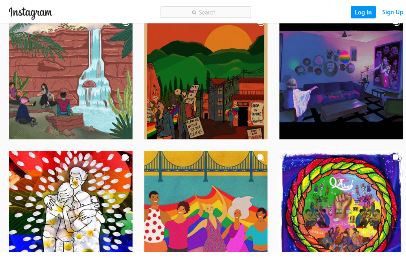 For Devina Buckshee, these archives “reflect the current state of queer political support in the country” and can become the nucleus of “a network of politicians who we could count on as allies. As an ally, I hope that young people seeing the list will see the support offered and dream big.”

A health reporter, Buckshee together with Binjal Shah and Fawzia Khan has also founded “a new feminist, collaborative platform focused on the intersection of mental health, social justice and politics” called The Mental is Political.

“During the lockdown, people from LGBTQIA+ communities who were stuck at home were often forced back into the closet, or forced to co-exist with homophobic or transphobic families. Stigma, discrimination and the social isolation of the lockdown all fed into feelings of anxiety, depression and other mental health issues.

Gawande believes that “It’s going to be a longer and a harder fight, but change has to come about through our political systems, and won’t until we hold our politicians accountable. We cannot be at the mercy of our courts, which have failed us in the past and will fail us again in getting any semblance of equality.”

Half of CPI MPs, 40% of NCP and 35% of Congress MPs publicly support queer rights

Towards Personhood: Humancentric Laws Cannot Resolve Our Conflict with Other Animals 18 hours ago

‘Swallow Because You Have to Live’: Mathura Prison Routine 19 hours ago

Photo essay: Women Farmers of Agroecology in A.P. and Karnataka