The Supreme Court on Tuesday stayed the implementation of the new farm laws till further orders and constituted a four-member committee to resolve the deadlock between the Centre and farmers' unions protesting at Delhi borders. The kisan organisations have stated since that the issue is between them and the central government, that they have not gone to the court, and will continue with their stir.

LiveLaw reported Chief Justice of India SA Bobde as saying during the hearing, “We don't understand either why old people and women are kept in the protests. Anyway, that is a different matter.” On Tuesday, just before the interim order, advocate AP Singh said that women, senior citizens and children will not participate in the protest. Singh claimed to be representing Bharatiya Kisan Union (Bhanu).

This has created a huge controversy within the protests, with letters and statements being drafted, to insist that women farmers are part of the struggle in their own right and have taken their own decision to participate. Incidentally the farmers are also observing Kisan Mahila Divas as part of their ongoing struggle, with women having made their way to protest sites on tractors.

Many women farmers are being trained to drive tractors with videos of this being put on a regular basis. The women, according to the kisan leaders, will participate in large numbers in their parallel Republic Day parade.

Two of the many videos that have been posted on the farmers social media sites record these views at some length. Here is what the women farmers themselves say to Feminism in India that has interviewed them, and tweeted the videos:

FII community members @Rashi_goyal28 and @Saleem_salman7 went out and spoke to Jashnjot Kaur Sidhu, one of the many women farmers at the forefront of the resistance against the farm bills. Watch Kaur explain how these laws will destroy the farmers of Punjab. #FIIFromGroundZero pic.twitter.com/C6TCTcCRAB


The FII team visited the Singhu and Tikri borders to speak with the farmers and protestors opposing the new farm bills, and talked to them to understand their concerns and demands. #FIIFromGroundZero #DilliChalo #FarmersProtest #FarmBills #FarmBills2020 #StandWithFarmers pic.twitter.com/bAFtmzDrCr 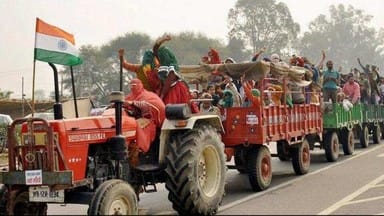