It was 1984. A difficult time for the Congress party that was coming out of the assassination of then Prime Minister Indira Gandhi, and the worst violence, fanned by its local Delhi leaders, against Sikhs that this country has ever witnessed. The party was on the defensive, its new Prime Minister Rajiv Gandhi a reluctant novice at the helm, with the leaders who had worked with his mother nipping at his heels.

It was also the year when Mamata Banerjee emerged victorious from the Lok Sabha elections. A little known entity she got the eyeballs and the title of ‘Giant Slayer’ as she emerged from the Jadavpur parliamentary constituency having defeated the seemingly invincible CPI-M stalwart Somnath Chatterjee. The entire Left Front was in shock as this diminutive lady joined the ranks of MPs in the Lok Sabha, sailing through an election that the ruling party of West Bengal at that time had taken for granted.

However, she might not have been known to India but Banerjee had made herself known to the Congress party as far back as 1975 when she danced on the car of socialist leader Jayaprakash Narayan as a protest against him.

In the Lok Sabha, she was part of Rajiv Gandhi’s ‘shouting brigade’, using sheer lung power to disrupt the House and force adjournments. In the press gallery above we would watch her jump to her feet the minute she felt the Congress was being cornered, and start screaming at the top of her voice. She could keep this on for what seemed an eternity as we journalists clocked the time. Banerjee would listen to no one and stopped only when either Rajiv Gandhi personally gestured, or sent word that enough, she should relax. Initially MPs laughed at her, but over time they cringed whenever Banerjee stood up in the knowledge that now the House would not be allowed to continue. Admiration did not seem to be a sentiment she evoked though.

Banerjee moved on as she was bound to. She did not appear ambitious, was extremely loyal to Rajiv Gandhi, a watchdog who jumped up with full lung power if any one even tried to criticise him. She parted ways with the Congress party in 1998 (she held ministerial positions under Prime Minister PV Narasimha Rao) to start her own Trinamool Congress Party. No one thought she and her fledgling party would survive the intensity of West Bengal politics, but she managed with her fluctuating politics of those years when she allied with the NDA and became the first woman Minister of Railways. It was an uneasy relationship, she left, fought elections along with the Congress party in 2001 and some such. And returned for another short spell with the BJP at the centre.

Despite being a Minister at the Centre, Banerjee remained one of the many. Until 2006 or so when she latched on to the Singur Tata Nano controversy, and took up the issue of violence in Nandigram. She emerged as a major advocate for people's rights, becoming a spokesperson for justice as it were.

To cut short all her political flirtations, Banerjee finally came into her own when she won the Assembly elections in West Bengal 2011 and became the Chief Minister. And became the “Didi” of present times, with her signature white blue border sari, and rubber slippers, and visible determination and grit. She took on the formidable Left Front in 2011, and again in 2016 ---emerging victorious and holding ground.

In 2021 the BJP became her fierce foe, as she fought back. As her election strategist Prashant Kishore said in an interview after Banerjee won the elections, the ride was rough. And the BJP had used all might and force against the petite woman, determined to oust her. The Congress and the Left also joined hands against her so in this campaign she was standing alone, being fired from all sides. Despite this she kept calm, took the barrage of abuse head on, and even as the BJP predicted a landslide victory itself, Banerjee came in with the full support of the people.

The story is still not over, as the central agencies were moved to arrest her leaders on an earlier scam. And every trick in the book is being played to give her grief, including summons from New Delhi directing her Chief Secretary to return. But Banerjee has stood firm. And instead launched a frontal attack on the Prime Minister and the Centre for targeting her just because they lost the elections. There has been a wave of support for her on social media, with Banerjee herself mincing no words in asking the PM and the central leadership why they are violating all rules and norms.

Her seemingly passionate outburst, in her characteristic English that might want for grammar but certainly not for speed and emotion, has gone down well with the bureaucrats and her constituents in particular, judging from the wide shares the video has received. Her supporters have started projecting her as the future Prime Minister, which probably will not bring comfort to the heart of not just the ruling but also the opposition parties.

Banerjee has also made it clear she will work for opposition unity, but this might be easier said than done. However, her landslide victory has firmly ensconced her as the daughter of the West Bengal soil, a position that she has started revelling in after her sojourns in Delhi.

Banerjee is India’s only woman Chief Minister today. She has come into politics through her own courage and work, not dependent on families or godfathers. She appears scatty but carries a mind that knows exactly where it is going. And laces it with a heart that convinces people of her sincerity. She is fire and brimstone, but also soft and kind as is visible on the streets of West Bengal or when she is dealing with disaster and death. She is not a coward as she has proven over and over again, taking on authority and autocracy as and when required. Adversity does not deter her, and she has worked herself into the top position of the state through sheer resolve.

At the time of writing this, in the face off with no less a person that the Prime Minister of India, it is advantage Didi. With the certainty that she will be more and more centrestage in the run up to the Lok Sabha elections, as the next stop in her fairly well mapped out political trajectory seems to be Central Vista! 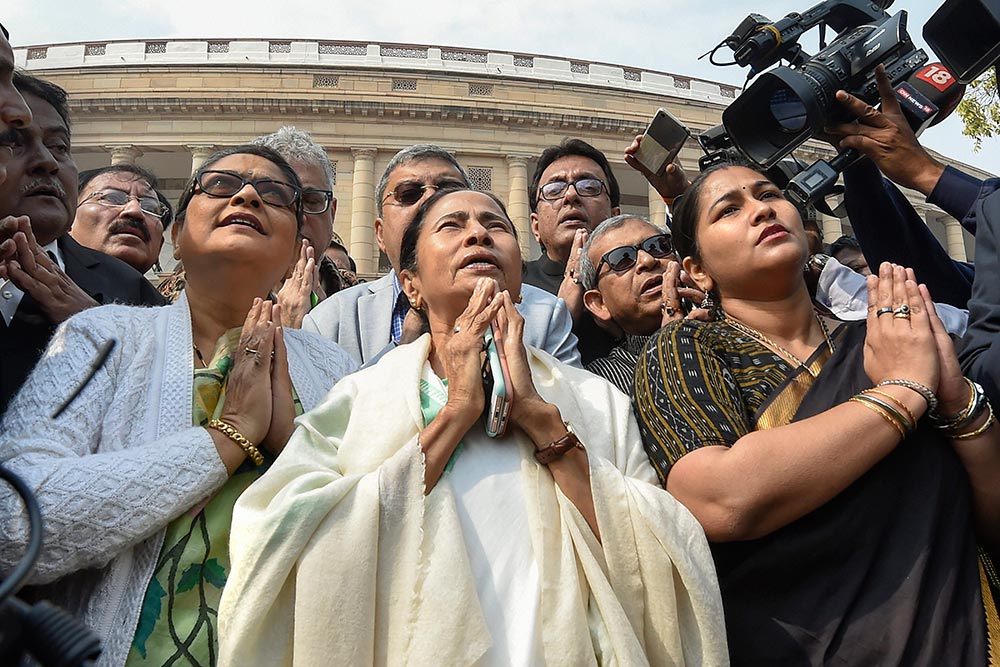