Six years ago, Rani Devi’s husband got into a heated argument with her and cut her left hand with a knife.

After somehow managing to reach a hospital, Rani got to know that she would not be able to use her hand anymore.

The attack had cut her veins and her hand had lost the sensation of touch and movement.

Rani registered a complaint against her husband and fought the case without the help of her family member, who tried to stop her in the name of “family honour”.

In less than 15 months, her husband was proven guilty and was imprisoned. This incident changed the life of an ordinary middle-aged woman living in Chandigarh.

Her sister supported her throughout her journey and together they decided to help any other woman who goes through this kind of abuse.

“I have gone through a lot of physical and mental abuse in my life and would never want another woman to go through the same,” said Rani Devi.

This is how Rani (51), along with her elder sister, Prema Devi (55), started a help desk in Chandigarh to help women fight domestic abuse.

Mahila Kendra is a small help desk portal started by the two sisters in 2018, for women to come and register their complaints.

The whole idea behind this was to help those women who do not approach the police due to hesitation.

“Women usually do not report these matters to the police, thinking it would bring shame to their family. They face violent treatment from their husbands and keep suffering throughout their lives,” said Rani.

She handed over the command to her sister in January 2020, after being diagnosed with uterus cancer.

“This was the second major change in my life. But I felt content as I knew this was a good initiative. The help desk has been receiving fundings from various NGOs across the city.”

“My husband physically abused me every day under the influence of alcohol. I approached Rani Didi to seek help. Three days later, a group of women (from an NGO) came to my house and talked to my husband. They threatened him with dire consequences if he didn't mend his ways,” she said.

Kaur was given a cell phone and was asked to immediately contact the NGO in case her husband beats her again. A week later, when she was being beaten up by her husband and her mother-in-law, she called on the number and forty minutes later, she and her son were taken to a shelter home.

“I wish to continue doing this for as long as I can. Since my sister doesn't work anymore, I am trying to find a partner who can help me in continuing this. We have received great help from different NGOs from across the city,” said Prema, Rani’s sister.

“I registered my complaint and the sisters helped me cope up with it. They provided me with a thela (cart) to start my own business. I now sell vegetables for a living to feed my children. They have relocated me to a nearby slum and they keep checking up on me if I need any help,” she said.

So far the sisters have helped around 280 women, mostly from the rural areas and slums of the city. The number of complaints increased during the pandemic.

“A week before the pandemic, we would see around 1-2 complaints. But during the pandemic, the number increased to around eight per week,” said Prema.

The lack of income due to the lockdown led to increased dowry demands, resulting in physical and verbal abuse.

“Women, who have been married for over eight years, saw their husbands making such demands on the pretext of getting some financial help for the woman’s family,” said Prema.

The Chandigarh Welfare Social Council, an NGO which has been funding the sisters’ portal, was shocked to see men making calls to complain against domestic violence.

Rucha Hooda, a senior in charge at the organisation, said that “Since November last year, we started getting SOS calls from men across the city asking for immediate help as they were being harassed by their wives and her family. The harassment was mostly due to lack of work and inefficiency to provide for their families.”

Once, said Hooda, they received a call from a man who was almost beaten to death by his wife and in-laws, but was saved after medical treatment.

“It took him 26 days to recover and the recovery was followed by therapy,” she said.

Hooda said she now wants to make such complaints normal as people never expect men to go through such trauma.

“The social stigma silences domestic violence victims, but now it’s not just women but men too who are going through the same abuse. We need to normalise the fact that men can also go through domestic violence,” she said. 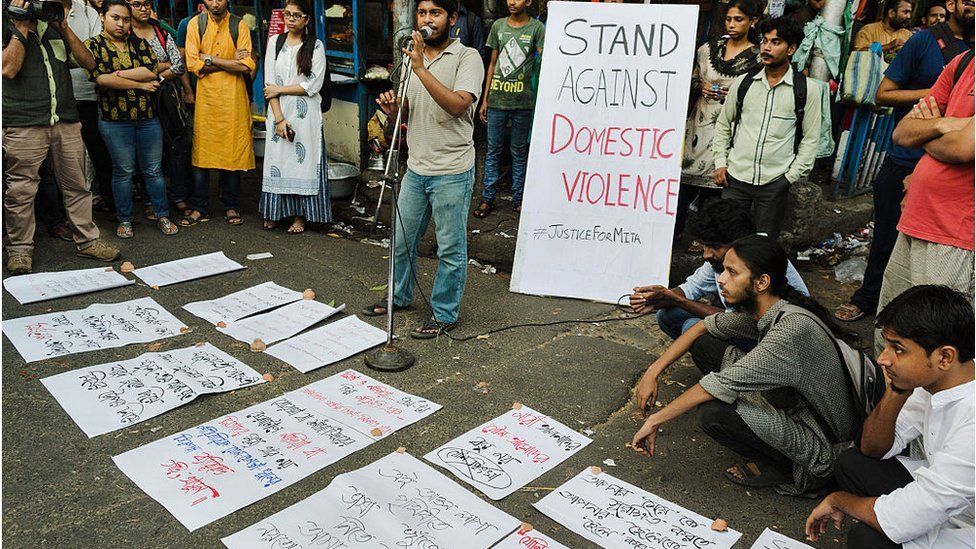