Women Scribes Under Threat, Both For Gender and Work

History of journalism across the world has proved again and again, that the pen is mightier than the sword. So, you can write as much as you want to, but do not question the policies of the government or powerful parties who have great influence on the policies of different governments and the decisions that these governments take.

If you question/criticise/ investigate/reveal negative and questionable activities of the government, never mind if you are a journalist, an author, a poet, a cartoonist or a writer, your life stands threatened and you may either be imprisoned for God-Alone-Knows how long, or eliminated.

The Gauri Lankesh murder was no freak occurrence. It was one among many across the world. She is no exception.

Never mind if this extends to any kind of writing such as the novel, a biography, poetry, story, music, songs, theatre, or even a work of art, it can create so much fear among the powers-that-be that this can lead to direct threats and even action against the ‘revealing’ parties. More so, if they are critical of the policies of the administration or the government in power, or revealing questionable strategies adopted by different governments of the state.

History has also shown that many governments have fallen mainly due to journalistic exposures that persisted in revealing the ugly underside of a given government steeped in acts of corruption, nepotism, the ones targeted of such journalistic attacks, the attempt is to break their pens, their computer keyboards, their paint brushes and canvases, or, if all these fails then go to the ultimate attack – kill or place behind bars for an indeterminate period.

Though apparently, there is no gender discrimination in powerful people threatening journalists, looked at deeply, women are more susceptible the same way like ordinary women are because they can be molested, harassed and raped which men journalists cannot be subjected to.

Women journalists therefore, are in no way less vulnerable to atrocities on their being than ordinary women who are not journalists.

One example is the brutal rape and killing of 20-year-old Bulgarian TV host and journalist. Victoria Marinova who investigated and exposed the alleged fraud with EU funds linked to big businessmen and politicians. quite freely with the European Union Fund. Her death caused international outrage during a time of increased violence against investigative reporters. On the afternoon of October 7, 2018, Marinova's body was found in a riverside park in Ruse. She had been beaten and raped before being murdered.

Irish journalist Veronica Guerin, a crime reporter who was murdered by drug lords when she was just in her mid-forties. She began writing about crime for the Sunday Independent. In 1996 she was fatally shot while stopped at a traffic light. The shooting caused national outrage in Ireland. Investigation into her death led to a number of arrests and convictions.

Before that, Alexandra Tuttle, correspondent for The Wall Street Journal was killed on 22 September 1993 when the military plane on which she was flying was hit by an Abkhazian ground-to-air missile when rebels shot down a Tupolev-134 plane flying from Tbilisi, the capital of Georgia, to Sukhumi, the capital of the Abkhazia region. The separatists took control of the city Monday night. Tuttle, who lived in Paris, was a regular contributor to the Leisure and Arts Page and the Editorial Page of The Wall Street Journal's European and United States editions for the three years, on subjects ranging from wars to art history.

Anna Stepanovna Politkovskaya was a Russian journalist, writer, and human rights activist who reported on political events in Russia, in particular, the Second Chechen War (1999–2005). For seven years, she refused to give up reporting on the war despite numerous acts of intimidation and violence. Politkovskaya was arrested by Russian military forces in Chechnya and subjected to mock execution.

She was poisoned while flying from Moscow to Rostov-on-Don to help resolve the 2004 Beslan school hostage crisis, and had to turn back, requiring careful medical treatment in Moscow to restore her health. On October 7 2006 she was murdered in the elevator of her block of flats, an assassination that attracted international attention. In June 2014, five men were sentenced to prison for the murder, but it is still unclear who ordered or paid for the contract killing.

The motive for these killings in every case is to silence the voices of those who raise their voice against policies detrimental to the people at large, or, those who are intent on unmasking the evil faces behind the masks to stop the complete monopolisation and blocking of investigative stories the top parties consider harmful for their evil exploits and safeguard the ‘treasures’ they have wrongly and criminally amassed at the cost of the masses of the country they dominate or rule over or both.

This is irrespective of whether the said national is a democracy, a dictatorship or something in-between. According to a UNESCO list, between .2010 and 2019, 898 journalists, including women, have been killed. India is no exception.

More than 70% of women journalists have experienced more than one type of harassment, threat, or attack during their careers, according to a 2018 Report published by the International Women’s Media Foundation (IWMF) and online threat monitor Trollbusters. Many cases remain unreported due to victims' fears of retaliation. Maria Elena Ferral Hernándes was murdered for her reporting—according to CPJ records, she is among 70 female journalists who have been murdered since 1992.

According to Reporters Without Borders, India is among the five countries where ruling governments are considered to be a life threat for journalists, both men and women. India’s ranking in freedom of expression to the media has come down from 140th in 2019 to 142nd today.

The safety situation for women journalists in India demands questioning. Whichever woman journalist takes courage in her hands to take cudgels against any government policy, or even tries to gather public opinion through their writings against such a policy that may trigger a movement among the masses especially against political violence, then, her life is in danger.

One example of such victim of state violence is television journalist Parveena Purakayastha who, last year, had questioned a political leader about communal violence in Delhi. She was the victim of brutal violence attacks.

Neha Dixit, a nationally and internationally awarded journalist is forever being threatened with rape, attack and murder. In response to her unceasing writings about sexism, labour rights violations and the corporate-political nexus in the mainstream Indian media, her house was broken into and damaged as she refuses to bend down to threats.

She regularly faces rape and death threats, and has been trolled online for writing against sectarian politics, using a gender lens and for reporting on tribals, Muslims and socio-economically marginalized sections of the society. She is also facing criminal legal cases under section 153A of the Indian Penal Code which criminalizes promotion of “disharmony or feelings of enmity, hatred or ill-will between different religious, racial, language or regional groups or castes or communities".

The main reason is that the people trying to harm these gutsy and brave women are either backed or appointed by the powers-that-be and therefore, have their solid support. One would need a microscope to find out how many police complaints by women journalists in India have been truly attended to and action taken.

To quote Lydia Belanger, “In their own pursuit of justice, journalists are frequently victims of discrimination and harassment—from employers, sources, and society at large. Female journalists are uniquely susceptible to such treatment in the form of sexism. But despite the heightened dangers of being a woman in an inherently dangerous field, stories reported by women benefit communities and keep governments in check every day.” (most-urgent-cases-journalists-killed-ranked-march)

And all this, for bringing out the truth and living up the journalistic tenets of honesty, integrity and objectivity. 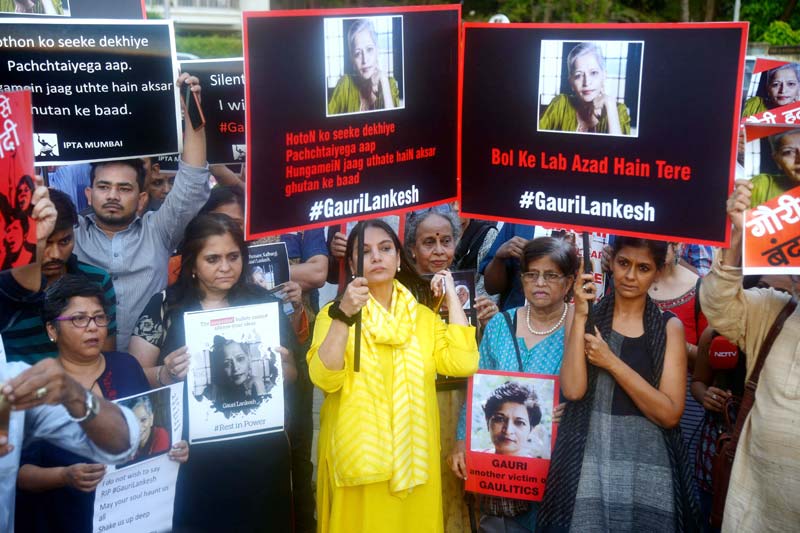