The film opens with visuals caught in sweeping, B & W frames focussed on different parts of a gigantic old tree which is witness to many crimes that take place within its immediate vicinity, such as, beneath its swaying branches, or, on its huge base, but its silence does not permit it to provide proof of the crimes it is witness to.

Saboot, in Hindi, is jointly directed by Nishtha Jain and Deepti Gupta and this writer was fortunate to have watched the film as part of Beyond Borders, the Feminist Film Festival which concluded on December 19.

Beyond Borders was organised as part of the 16 Days of Activism against Gender Based Violence and to celebrate the South Asian Women’s Day (30th November). The festival was dedicated to Kamla Bhasin under whose leadership the first edition of this festival was organised in November 2020 and many other feminist friends who passed on yonder last year. The festival was curated by Anchal Kapoor and Reena Mohan and was organized by Kriti Film Clun and Jagori.

The camera cuts to the interiors of a nursing home where Amandeep, a Sikh gynaecologist is beginning his career in. This is his first day of work so he is more a silent witness to the happenings, much like the tree, than an active gynaecologist attending to female patients in different degrees of distress.

The camera cuts to a close-up of a woman suffering from intense labour pains as her husband and two little daughters wait outside the labour room. When the husband learns it is a boy, he begins to distribute sweets and compliments the male doctor saying it is due to his blessings.

The two little girls with sad faces, walk away slowly with their father. He obviously has no clue that the sex of the unborn child is determined solely by the XY chromosomal balance in the father and not the mother or any doctor.

Saboot offers a unique perspective on rape not by focussing on the incident or the victim or the rapists but rather, on a medical system which is as much guilty as the rapists are in not attending to the victim when she needs them the most and with great urgency.

Since it is a woman’s section, most of the para-medicals are women. The treat this doctor with open disdain commenting on how a male doctor has no place in the gynaecological ward. Then a young woman enters with marks of injury across her body. But the head of the gynaecological section is a lady who is suffering from a bad headache and has locked herself up in another ward. The Sikh young man tries to help but the main nurse, least interested in the victim, reminds him that no male doctor is legally permitted to examine a woman victim of rape so he withdraws.

He summons the head who steps in, asks the young patient to strip and then examines her, leaves telling the Sikh doctor to get the victim’s signature on the prescribed form. Amandeep recalls how his father had questioned his choice of becoming a ‘woman’s doctor’ but his mind was made. He is shocked to discover that the slides on which specimens of the body fluids of the victim were taken were kept so carelessly that they have become useless. The head nurse, eager to wrap up and call it a day, says this is the first time she is hearing a doctor ask for a second round of tests for specimens. The girl, badly scarred through torture followed by rape, steps out of the curtained area and stands upright, as if she is challenging the very system that treats her torture with such callousness where even tests are taken after making the patient wait for two hours.

“What is the use of this testing and writing of reports, tell me?” the departmental head asks Amandeep rhetorically and he has no answer. But his face expresses his utter frustration and disappointment with a medical system that treats female victims coming from low economic backgrounds as if they do not exist!

Amandeep is a witness and a part of the very system that does not take its commitment to patients seriously and even a rape victim, badly tortured is made to wait for two hours before a lady doctor steps in, called in by Amandeep.

Another paramedic, a woman, is busy knitting something and the head nurse asks her how to create the pattern she is knitting. When the rape victim walks out as her voice of protest, in comes the news of a little girl brought in, a victim of sexual abuse by someone within the family for which the very cheap phrase used is “silai machine.”

The camera cuts back to that old and gnarled tree capturing it in an angle which makes part of its massive trunk resemble the body of a young, voluptuous woman, proud in her display of her bodily charms to a world that is more interested in raping young and vulnerable women who can only make love in isolated and lonely public spaces like a park or under a tree.

Within the short span of 20 minutes, the directors, through stark and sharply defined B & W images with little dialogue and an imaginative sound design, have hit the right chord in this discordant orchestra where the callousness of the medical fraternity, which includes many women, are completely negligent about taking care of their women patients who cannot fatten their purses.

Nishtha Jain, an established documentary filmmaker whose films have won prizes across the globe, says, “The film is based on the experience of a junior doctor in Delhi hospital in 1984. Any romanticism that a young conscientious male gynaecologist harbours about his job is shattered on his very first day at work.

Women, the source of life, are rarely treated as people in the 'ladies ward'. From dealing with the disappointment of the families at the birth of a girl child, to a constant stream of rape survivors – adult and minors – being a gynae is not just about assisting mothers in labour.”

Amandeep will never forget his time as a junior gynaecologist in a government hospital in Delhi. He was conscientious, which rendered him unfit for the system. The ‘women’s ward’ was a microcosm of woman’s lot in society. If he fancied changing the system, he would have to, perhaps, begin with himself.

Nishtha goes on to add, “the medical system connived to show rape as consensual or make it look like accidents in the case of minors - silai machine used to be a code word in these hospitals for cases of sexual abuse of minor girls by a family member. Such cases are hushed up by the medical staff at the behest of family members. The ladies’ ward is a microcosm of the women's place in society.

Saboot throws up a heart-breaking portrayal of discrimination and cruelty that impacts women in India. Though the caste identity of the victim is not shown, the circumstances of her rape, the dark colour of her skin and the bruises on her body and private parts are evidence of the caste being potrayed.

Saboot is an unforgettable film, particularly the scene where the patient stands up to leave after being denied care. 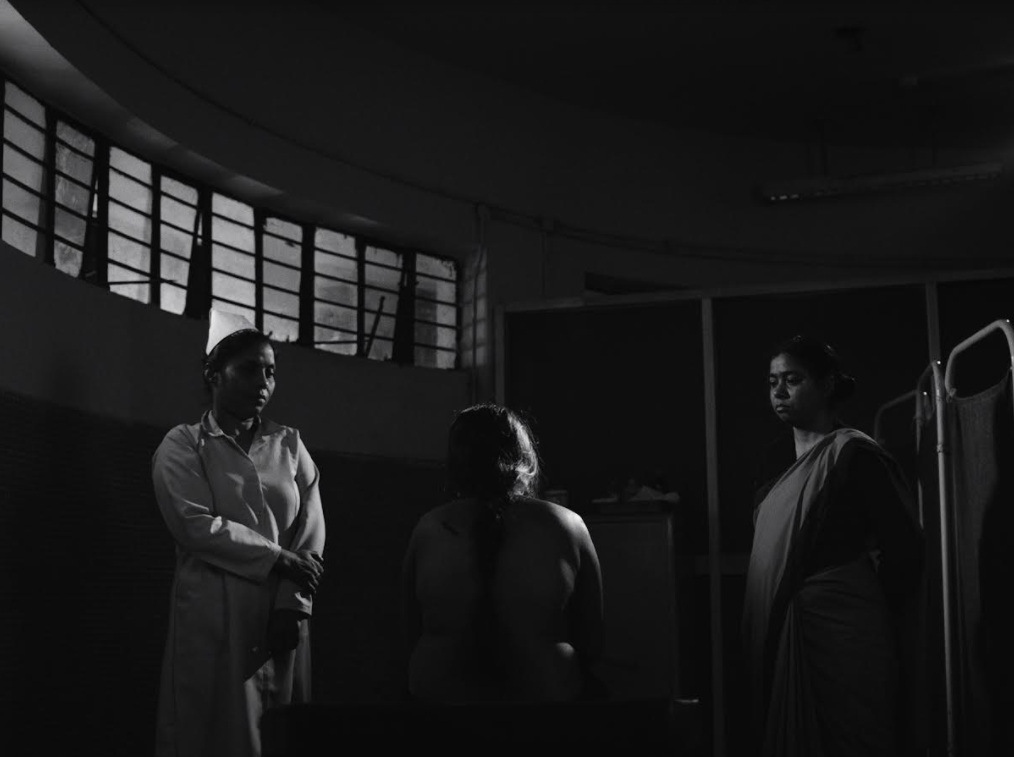