‘The Question is Whether My Attire Can Cause Public Disorder’

‘I won’t blame the college. I’d blame the politics of this state and country’

CHENNAI: Recently the administration of a government college in Udupi banned six Muslim students from entering the campus with their headscarves on. One of the students filed a petition in the Karnataka High Court demanding the right to wear a hijab under Article 14, which guarantees every person in India equality before the law, and Article 25 which protects the right to practise, profess and propagate any religion.

The college management then met with the parents of the students on January 19, but they could not arrive at a decision. At another meeting on January 31, the management declared that the girls would be allowed to wear a hijab in the campus premises, but not inside classrooms, until the government submits its report.

On February 4, Muslim students in hijab were dismissed by the management of the Bhandarkars’ Arts and Science College in Kundapur. When the students started protesting outside the college gates, several Hindu students rose in a counter-protest wearing saffron shawls. Police were deployed and the management declared that both parties, those wearing hijab and those in saffron shawls, would be barred from entering the college. A similar situation was reported at the Dr BB Hegde First Grade College.

Syed Yaseem, a state leader of the Congress party said from Kundapur, “They have made the word ‘hijab’ sound terrorising. Since the time Muslim girls have been going to schools and colleges, they have been covering their heads. Now, due to political pressure, these institutions are suddenly barring students wearing the headscarf. It is the fundamental right of these students and this is not the first time they have been punished for it. We have no intention of fighting, we are not even protesting yet, we are just trying to have peaceful discussions with the management. But we will protest if they don't agree to give us our rights.”

“The elections are coming up and they have to create communal conflict for their benefit. Wherever there is a Hindu majority, they don't care about Muslims or their rights,” Yaseem told The Citizen.

“I agree that there has to be uniformity in schools, but it should be mentioned before we come for admissions. Then we’ll decide whether to send our children to these colleges or not. There’s just one more month for the annual exams. If you ban them now, what will happen to their future?” he asked.

On the Muslim men students who have came out in support of their women counterparts he said, “I am glad that they did that, as they must. The High Court will give a verdict on February 8. We will abide by their decision, but it is also our right to fight for our rights anywhere in India, so if we don’t get a favourable verdict we will even go to the Supreme Court.”

Syed Furqan, one of the students who took up the matter with the administration at Bhandarkars College said, “Freedom to practise our religion is a fundamental right provided in our Constitution and we will fight for it. We haven’t gone out on the roads yet. We are just standing in front of the college gates.”

Furqan narrated how the incident unfolded in his campus. “On January 3, when the girl students entered the college wearing the headscarves, the college administration dismissed them saying they had received an order from the government that headscarves should not be allowed in the campus. When the girls asked them to show a copy of the order, they replied that it was just an oral communication. When they kept asking for more evidence, they said they received the communication from a third person, by which they meant political influences.”

“They said they need to wait for a decision from the High Court. The students went back home that day. However, they went back the next day wearing the headscarves again and found the entire management near the college gates, along with the police, ready to dismiss them.”

“They said they would be allowed only if they remove it. So our students started protesting. Five of us boys went to speak to the Principal. He told us that they don’t have any intention to create communal disharmony, but their hands were tied because they were under political pressure. He also guided us on what to do and whom to speak to. But there was no clarity. We just kept being directed from one person to the other. We haven’t protested since then. We will await their decision on Monday.”

Furqan added, “I won’t blame the college. I’d blame the politics of this state and country. If they don’t obey their orders, they will be threatened. Now these students were unable to take their exams, they have to appear for one more semester. The students are all very disappointed and anxious. Some of them don’t even remove their hijabs at home, so how can you expect them to remove it in front of so many people? It is a matter of their faith. There are a lot of Hindu students in our college who wear bindis and malas. We never objected to that. So why are our expressions of faith being banned?”

“The Constitution grants the right to religious freedom as well as the right to education to all Indians. The girls cannot be denied education because they choose to wear hijab. In a religiously polarised climate, it is not surprising that the issue has got politicised with ministers jumping into the fray. While the college authorities are free to decide their own rules, they cannot be violative of fundamental rights granted by the Constitution. The singling out of Muslim girls must stop immediately and the girls must be allowed to exercise their right to education without any hindrance.”

Adding that, “We believe that hijab is a patriarchal imposition as much as ghungat or sindoor or bindi or other diktats being imposed on girls in our country across different faith communities. The parents would not permit the girls to go to college without hijab and the authorities would deny them entry because of hijab. In either case, girls’ education is bound to suffer. Although the question of social reform in Muslim societies is of utmost importance, the current discrimination in the name of hijab is an outright violation of constitutional principles of equality and justice. Only educated and empowered girls can fight for equality and justice as well as against conservatism and male domination.”

As the controversy escalated and spread across the state, Chief Minister Basvaraj Bommai held a meeting with B.C Nagesh, Minister of Primary and Secondary Education to discuss the situation. The Karnataka state government on Saturday ordered a ban on all clothes that disturb equality, integrity and public order.

On the conflict between the right to practise one’s religion and the state’s duty to prevent public disorder, Tehmina Arora, a prominent lawyer and human rights activist said:

“If some groups are creating a ruckus, the state must in turn protect fundamental freedom. The state must restrict fundamental rights only in very limited situations and at the moment, it is not very clear as to how a simple scarf or any other religious expression like the tilak or a cross around the neck is creating public disorder. Someone might get outraged by it, that is understandable, but how is it creating public disorder, that is not entirely clear in this case.” 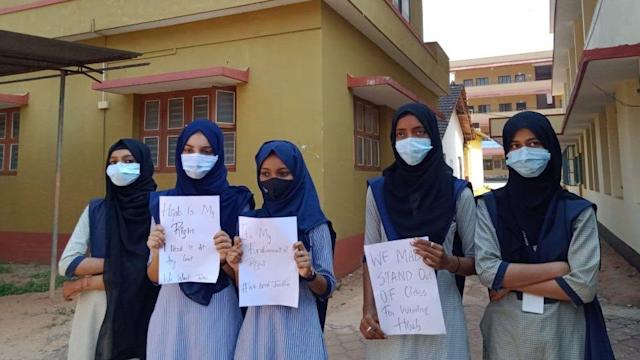