The Definition of 'Rape' Cannot Change with a Marriage Certificate

NEW DELHI: “I was brutally raped thrice by my husband. He kept me under surveillance in his Dubai house while I suffered from severe malnutrition and depression. When I tried to flee from this hellhole, he confiscated my passport, deprived me of money and beat me up,” recalls Anna Marie Lopes, 28, a rape survivor who after six years of torture, finally managed to board a flight to New Delhi from the United Arab Emirates in 2012.

Today, Lopes works at a non-profit in India’s capital, New Delhi, and is slowly picking up the shards of her life. “Life’s tough when you have to start from scratch after such a traumatic experience with no support even from your parents. But I had no other choice,” Lopes tells IPS.

"Is the government saying that it is acceptable for men to rape their wives? Or does it believe that marriage is a licence for sexual violence on the pretext that this constitutes upholding Indian culture and values?” -- Amitabh Kumar, the Centre for Social Research

Her story is different from that of thousands of Indian women only in that it has a somewhat happy ending. For too many others who are victims of marital rape, escape is not an option, keeping them trapped in relationships that often leave them broken.

The United Nations Population Fund (UNFPA) estimates that over 40 percent of married women in India between 15 and 49 years of age have been beaten, raped or forced to engage in sexual intercourse with their spouses.

In 2011, a study released by the International Center for Research on Women, a Washington-based non-profit, said one in every five Indian men surveyed admitted to forcing their wives into sex.

Only one in four abused women has ever sought help, the survey stated, adding women are much less likely to seek help for sexual violence than for physical violence. When violated, women typically approach family members rather than the police.

Given this ominous and entrenched social reality, the present government’s reluctance to criminalise marital rape on the grounds that marriage is “sacred” in India has fuelled an intense debate.

Minister of State for Home Affairs Haribhai Parathibhai Chaudhary said in a statement to the Rajya Sabha (the upper house of the Indian parliament) last week that the concept of marital rape, as understood internationally, could not be “suitably applied in the Indian context due to various factors, including level of education, illiteracy, poverty […] religious beliefs [and the] mindset of the society.”

Human rights campaigners are up in arms about this statement, claiming that in addition to it affirming the country’s patriarchal mindset, it besmirches India’s reputation as a liberal and equitable democracy.

“Is the government saying that it is acceptable for men to rape their wives? Or does it believe that marriage is a licence for sexual violence on the pretext that this constitutes upholding Indian culture and values?” asked Amitabh Kumar of the Centre for Social Research, a Delhi-based think tank.

“A rape is a rape, and […] infringes upon the victim’s fundamental rights,” Kumar told IPS.

Currently, marital rape, defined as forceful sexual intercourse by a husband without the consent of his wife – leading to the latter being physically and sexually battered – is governed by Section 375 of India’s Penal Code.

The law expressly states that forced sexual intercourse by a man with his wife, provided the latter is not under 15 years of age, does not constitute rape.

Though the Domestic Violence Act passed in 2005 recognises sexual abuse in a marital relationship, legal eagles say it offers only civil recourse, which cannot lead to a jail term for the abusive spouse.

Following the gang rape of a young medical student in New Delhi in December 2012, the groundswell of public angst in India led the then-ruling United Progressive Alliance (UPA) to set up a commission tasked with reforming the country’s anti-rape laws. 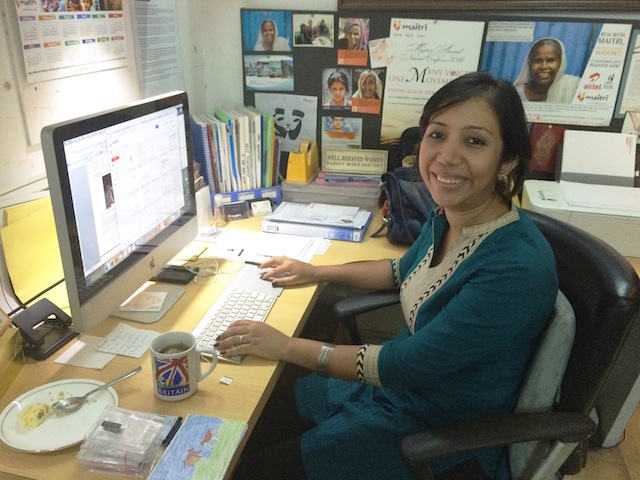 Anna Marie Lopes, 28, is a survivor of marital rape who now works at a local non-profit in New Delhi. Credit: Neeta Lal/IPS

The three-member Justice Verma Committee recommended that sexual violence between spouses be considered rape and be punishable as a criminal offence.

However the government, which at the time was helmed by the Congress Party, dismissed the committee’s suggestion by arguing that such a move would wreck the Indian institution of marriage.

“If marital rape is brought under the law, the entire family system will be under great stress,” said a report by lawmakers submitted to parliament in 2013. The government eventually cleared a new sexual assault law, one that did not criminalise marital rape.

BJP Spokesperson Meenakshi Lekhi stated last week, “We will give prominence to our institutions,” suggesting that the government has little intention of acting on the recommendations of the Verma Committee, or demands from civil society.

In January this year, the Supreme Court rejected a woman victim’s petition to declare marital rape a criminal offence, arguing that nationwide legislation couldn’t be tweaked for one person.

Even now, the legal community is splintered over the merits and demerits of criminalising marital rape.

While senior criminal lawyer Ram Jethmalani and former Supreme Court Justice K T Thomas have publicly endorsed the government’s viewpoint that the law must not be changed, others beg to differ.

“The institution of marriage is an integral part of Indian culture. But this has not stopped us from bringing in the anti-dowry law or domestic violence legislation,” New Delhi-based human rights lawyer Soumya Bhaumik told IPS.

“If a husband can be tried for murdering his wife, why can’t he be tried for raping her? The entire concept of consent or definition of rape does not change with a marriage certificate.”

Bhaumik also referred to documented cases of husbands or even wives forcing themselves upon their spouses, leading to not just physical but mental and emotional trauma as well.

“The current Domestic Violence Act treats such episodes as civil cases. This means that erring spouses are issued restraining orders or the aggrieved party is given a protection order. However, there is no provision for putting the guilty party behind bars,” he stated.

The U.N. Committee on the Elimination of Discrimination against Women has recommended that India make it criminal for a man to rape his wife.

Marital rape has already been criminalised in the United States, the United Kingdom, South Africa, Canada, most European nations, Malaysia, Turkey and Bolivia.

This places India in a tiny global minority – along with China, Afghanistan, Pakistan and Saudi Arabia – which refuses to criminalise this form of assault.

Some experts feel that the Indian government’s reservations over the issue may stem from fears about a communal or religious backlash. The Hindu Marriage Act 1955 states that it is a wife’s foremost duty to have sex with her husband.

This entrenched attitude, as well as a lack of economic independence, acts as a barrier for women who might otherwise come forward to report the crime.

“Most women don’t come forward to complain about such rapes as they fear that jail for the breadwinner will spell doom for family and kids,” Winnie Singh, executive director of Maitri, a Delhi-based non-profit that works for the rehabilitation of underprivileged women, told IPS.

“According to our research, conviction has been less than one percent in such cases.”

Singh also blames a cumbersome legal process that puts the onus on the woman to prove that a rape has occurred, something that few women are willing to take on given low conviction rates.

According to a report by Aashish Gupta of the Research Institute for Compassionate Economics (RICE), despite an increase in reporting among survivors following the passage of the Criminal Law (Amendment) Act, 2013, rape continues to remain under-reported.

Only about six of every 100 acts of sexual violence committed by men other than husbands actually get reported, reveals Gupta’s report.

Experts like Singh feel that in such a scenario, sensitisation and mass education are vital to bringing about awareness and ensuring justice for the victims.

“Stepping up rehabilitation efforts as well as large-scale visual campaigns by the government and human rights organisations involving all stakeholders are the only ways to safeguard women from this heinous crime,” she stressed.