NEW DELHI: "The police took more than a year to file a charge sheet in Pachauri's case and the court took nearly two-and-a-half months to take cognisance," said advocate Prashant Mendiratta. The recent sexual harassment case on Dr. Pachauri registered by a research scholar at TERI will stand trial after a year's struggle of complainant.

Since the law 'Sexual Harassment of Women at Workplace (Prevention, Prohibition & Redressal) Act, 2013 has come into force, there have been an increase in complaints reported. An alarming increase of 110% in complaints received i.e. from 2013 to 2015, is a good sign. The reports increased with an expectation that the new law in place will facilitate prosecution. However, the question is, are all these cases being redressed? 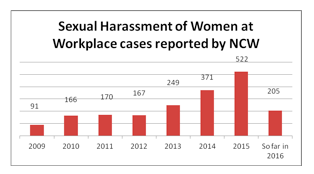 Also noticeable, is that most of the cases are reported from Delhi and Uttar Pradesh. There is startling difference in the reports received from other states to these two States. 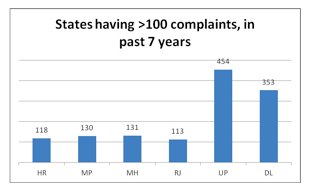 There is a detailed handbook available by the Ministry of Women and Child Development, Government of India, stating the procedures and the responsibilities of each individual/ organisation. As per the book, the recommendations given by ICC are to be implemented by the employer within 60 days. If not satisfied by the recommendations or non-implementation, the complainant can appeal to a tribunal/ court within 90 days.

In Pachauri's case, the complainant had resorted to internal processes at TERI for help, during which an Internal Complaints Committee (ICC) inquired into the case and had found him guilty. It was alleged by the complainant that TERI did not act as per the recommendations given by ICC and she filed a FIR on February 13, 2015.

The FIR was under sections 354, 354A, 354D, and 506 of the Indian Penal Code which pertain to outraging the modesty of a woman, assault and criminal force on her, unwelcome physical contact or advances, and making sexually-coloured remarks. All of them are non-bailable offences and based on the evidence thrown up by the investigation, police can move to arrest an accused. Yet, Pachuari was given interim protection from arrest till March 27, 2015. And later, was given an anticipatory bail.

Meanwhile, he had stepped down as chairman of IPCC and resigned from the PM's council for Climate Change but did not leave TERI. The court had barred him from entering TERI office but later, he was appointed as Executive Vice Chancellor amidst the case. Many protests and outrage from TERI alumni, students and ex-employees were held against the protection given to Dr. Pachauri. Later, he was given 'paid leave' instead of his removal or suspension.

Why was TERI protective of Pachauri? This is a common mistake employers make. Employers generally treat such cases as degradation of reputation more than the accusation of the actual sexual harasser. There is a lack of awareness and sensitization amongst the employee and management of the organisations, which is to be adhered to, as per the law 'Sexual Harassment of Women at Workplace (Prevention, Prohibition & Redressal) Act, 2013. It requires employers to conduct education and sensitisation programmes and develop policies against sexual harassment.

India has laws to protect women rights, from the Preamble of the Constitution, “equality of status and opportunity” to the articles 14, 15 and 21. These articles ensure rights to equality, prohibition of discrimination and dignity of Life. India also ratified UN Convention on the Elimination of all Forms and Discrimination against Women (CEDAW), which was adopted by UN General Assembly in 1979. It is an international bill of rights for women, which provides the basis for realising equality between women and men through ensuring women's equal access to, and equal opportunities in, political and public life.

India has laws in place, what seems to be lacking is the implementation of these laws and delays in the processes which lead to lost hopes. Had the recommendations given by ICC were implemented by TERI, the complainant would not have approached Police and the case could be less time consuming.

Another major factor of this case being, the involvement of high profile internationally acclaimed personality Dr. Pachauri. Our constitution as per Article 14 ensures that the State shall not deny to any person equality before the law or the equal protection of the laws within the territory of India. Most of the high profile cases seem to be receiving more than equal protection of the laws. Citing other sexual harassment cases at work, that came after the law 'Sexual Harassment of Women at Workplace' in 2013.

The former Tehelka chief Tarun Tejpal, was accused of sexual assault during an event in Goa by a former colleague. The complaint was suppressed by the staffers of Tehelka, which raised more furore. Very similar to Pachauri’s case, he has been granted bail and the case is still being heard in Goa court.

The former Supreme Court judge, Ashok Kumar Ganguly, was accused of sexually harassing a law intern in a hotel room. He had to step down as head of the West Bengal human rights commission in 2014. The Supreme Court had accused Ganguly for “unwelcome behaviour” and “conduct of sexual nature”. This is a success story where he had resigned from the post immediately.

Sexual harassment at the workplace had existed since a very long time. The US was the first country to make law acknowledging the misconduct, by creating Title VII of the Civil Rights Act in 1964. Since then, many countries followed US’s footsteps and enacted against sexual harassment. Australia had enacted Sex Discrimination Act in 1984, The European Union Directive 2002/73/EC on Equal Treatment of Men and Women in Employment, was passed in 2002. All member states had to adopt it by 2008.

Most Asian countries, like Hong Kong, Japan, Singapore, South Korea, Vietnam, including India have passed legislations against sexual harassment at workplace in the recent five years.

As per the report by Joni Hersch for IZA World for Labor, the efficacy of such laws depends on the reports received by victims and others affected by the harassing behaviour. Yet sexual harassment is seriously underreported. More than 90% of US government workers who had experienced sexually harassing behaviours did not take formal action (notably half did not do so because they did not consider the harassment to be serious). The low rate of legal charges filed with the US Equal Employment Opportunity Commission in comparison to the high rate of sexual harassment reported in surveys indicates that very few victims pursue formal legal remedies. The decision not to report is often justified by concerns about retaliation and the consequent effect on job satisfaction.

The effectiveness of the law in the Indian scenario can only be commented after a detailed look at a recent survey. E&Y had conducted a survey in 2015 on the compliance of the Act that came into force in 2013. Key findings were that 40% of the respondents were yet to train their ICC members, although the Act specifically mandates this. 44% of the respondents’ organisations did not display the penal consequences of sexual harassments at conspicuous places. 35% of the respondents were unaware of the penal clause for non-compliance with laws relating to how ICCs should be constituted. These findings definitely indicate that awareness and sensitiveness in organisations remain the major concerns.