RIO DE JANEIRO (IPS): At the age of 14, Kaillana de Oliveira of Brazil knows she won’t be as tall as most professional basketball players, because of family genetics. But she is not letting that get in the way of her dream of standing out in the sport.

“I’m point guard, and you don’t have to be so tall for that position,” Oliveira, a student at the Olympic Villa – a multi-purpose sports complex – in the poor Rio de Janeiro neighbourhood of Mangueira, told IPS.

That public sports facility produced three of the players on Brazil’s women’s national basketball team, which is competing in the Aug. 5-22 Rio 2016 Olympics.

Oliveira trains at least four days a week, “for three hours, sometimes more.” She gets up at 5 AM to attend a school in a distant neighbourhood, which offered her a scholarship as a promising young athlete. She is disciplined and is in bed by 9 PM.

Oliveira has participated in many tournaments for girls. “Basketball is a fast, dynamic contact sport,” she said. That’s why she chose it five years ago, from the various sports she tried in a complex near the Mangueira “favela” or shantytown, where she lives.

Her family supported her choice, but she faces prejudice among her classmates. “They say it’s for lesbians,” she said.

“I want to be a good player; if I don’t make it, I’ll be a lawyer,” Oliveira told IPS in a conversation on the basketball court where she trains.

She participates in the programme “One Win Leads to Another”, an initiative of U.N. Women and the International Olympic Committee (IOC) aimed at empowering girls through sports, as a legacy of the first Olympic Games to be held in South America.

The programme, based on the Dutch NGO Women Win, includes weekly workshops on issues like self-esteem, leadership, sexual rights, violence and financial planning, as well as sports activities.

It began in Rio de Janeiro and until 2017 will function as a pilot project, with the goal of boosting the autonomy and self-confidence of 2,500 girls between the ages of 10 and 18, as well as 300 adolescent mothers who have dropped out of school.

The activities are held in 16 multi-sports complexes called Olympic Villas that the city government has set up in poor neighbourhoods.

The programme will later be adapted to local conditions and expanded to other cities around Brazil and Latin America. 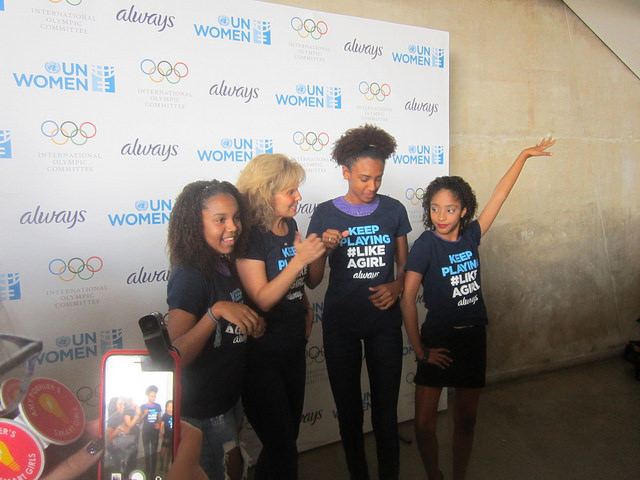 (Kaillana de Oliveira Donato, Marcelly de Mendonça and Adrielle da Silva are active in the U.N. Women’s and International Olympic Committee’s “One Win Leads to Another” programme, standing next to Juliana Azevedo, a vice president in Procter & Gamble, another partner in the initiative, during the presentation of the programme in Rio de Janeiro. Credit: Mario Osava/IPS)

Women Win, a U.N. Women partner, developed the original programme, which has already been implemented in 25 countries.

A survey found that of 217,000 participants, the proportion of girls who saw themselves as leaders increased from 46 to 89 percent, and the proportion of those who know how to avoid getting pregnant or catching a sexually transmitted disease rose threefold, to 79 and 77 percent, respectively.

The initiative also seeks to expand access among teenage girls to the benefits of sports. Around the world, 49 percent of girls quit practicing sports when they hit puberty – six times the proportion for boys, which aggravates gender inequality, according to U.N. Women.

“The power of sport should never be underestimated. It can change lives, through increasing girls’ and young women’s beliefs in their own abilities, encouraging them to take initiative and aim high,” U.N. Women Executive Director Phumzile Mlambo-Ngcuka said at the Aug. 6 presentation of “One Win Leads to Another” in Rio de Janeiro.

One of the big challenges the programme has taken on “is leveling the playing field for men and women,” the representative of U.N. Women in Brazil, Nadine Gasman, told IPS. “In the Rio Olympic games, women make up 46 percent of the competitors, and there are no sports that do not include women, but the difference in resources is appalling.”

“Ten national Olympic committees include no women, and very few are on the International Olympic Committee,” which means they have less of an influence on sports, she said. “Women are also less visible on TV sports channels, where the broadcasting of men’s sports wins 10 to one, with the exception of the Olympics.”

The history of the Olympic Games reflects women’s struggle for inclusion. Women were absent from the first modern-era edition, in 1896 in Athens. In the next Games, in Paris in 1900, the only women’s sports were tennis and golf, and women made up just 2.2 percent of the total number of participants – 22 out of 997.

The proportion only climbed above 10 percent after 1952, growing to 44.2 percent in 2012, after women’s boxing was finally accepted as an Olympic sport.

But inequality persists. The funds earmarked by the Fédération Internationale de Football Association (FIFA) for the national teams that participated in the men’s 2014 World Cup, also hosted by Brazil, were 40 times greater than the amount that went to the 2015 Women’s World Cup, Gasman pointed out. 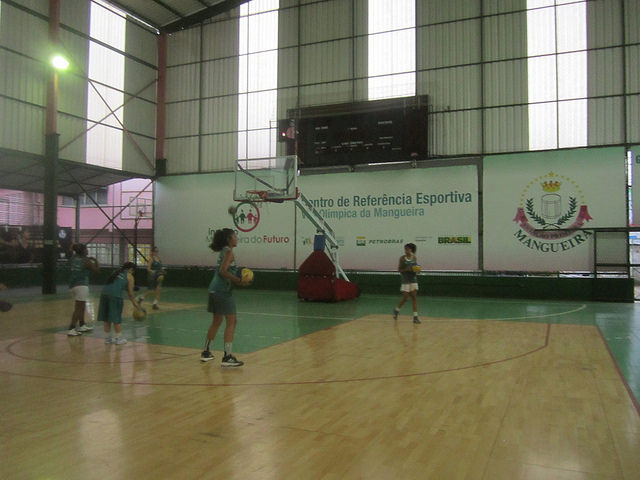 (Teenage basketball players training in an Olympic Villa, one of the sports complexes created by the Rio de Janeiro city government, in the “favela” or shantytown of Mangueira, close to the installations where the Olympic Games are being held. Credit: Mario Osava/IPS)

The women’s winning team’s prize was smaller than the amount that went to the team that came in last in the FIFA World Cup, reflecting the discrimination still suffered by women athletes, she added.

But in the Olympics, the imbalance is being reduced more quickly. In 1995 the Women in Sport Commission was created in the IOC, to advise the executive board and president on how to expand women’s participation in decision-making and how to develop and implement the IOC women and sports policy.

Since 2004, women have served as vice president of the IOC, and since March this year, at least one-third of the members of the IOC working groups are women.

But cultural and social prejudice continues to hinder progress towards gender equality in the practice and administration of sports.

Adolescence is a critical period of physical changes and peer pressure. That is why it is essential to intervene at that time, as “One Win Leads to Another” does, “to keep girls in sports, which helps them prepare for life at the same time,” said Gasman.

In Brazil, the rate at which girls drop out of sports at puberty is lower than the international average reported by U.N. Women and the IOC, but it is still worrisome.

A survey carried out by the Ministry of Sports in 2013 found that 34.8 percent of girls quit sports before the age of 15, compared to 19.3 percent of boys.

But this is not true in Rio de Janeiro’s Olympic Villa sports complexes. “We have more girls than boys, and they stay throughout adolescence. But they prefer ballet, jazz or rhythmic gymnastics,” said Norma Marinho, a social assistant at the Miécimo da Silva Sports Centre in Campo Grande, a huge working class neighborhood west of Rio de Janeiro.

The idea that certain sports are for boys keeps girls away from track and field and many other disciplines. “They crowd into ballet classes, even if the teacher is a man,” said Marilda Veloso, who teaches handball at the sports complex, where 13,000 students and other people are active in 28 different sports.

Factors that lead girls to drop out are “embarrassment about their bodies, household chores, and prejudices,” although fewer are quitting these days, Veloso, who has worked at the sports centre for 30 years, told IPS.