NEW DELHI: Delhi University and JNU students marched again demanding strict action against ABVP from the police and university administration. The protest was organized today at Mandi House. The protest drew even more students, compared to February 28 and included activists from various NGOs.

The students were singing and chanting slogans like, “Hum ek hain”, “ABVP go back” and “Ho RSS se Azadi”. Nivedita Menon, a professor at JNU, said, “these hooligans just want to curb the freedom of the people. When ABVP organized their protest they were chanting slogans against the posters in Urdu used in our protest saying we want azadi from Urdu. Someone please tell them that even “Azadi” is a Urdu word. These people want to spread fascism in our country which we have to retaliate otherwise what happened in Germany will be repeated here.”

Kamaljeet Kaur, a student of Delhi University told The Citizen, “majority of the people who participated in the ABVP protests earlier were from outside and not common students. They just wanted to match the numbers we obtained during our last protest. They shouted violent slogans, threatened people and created chaos. We cannot accept this and we will fight back.” 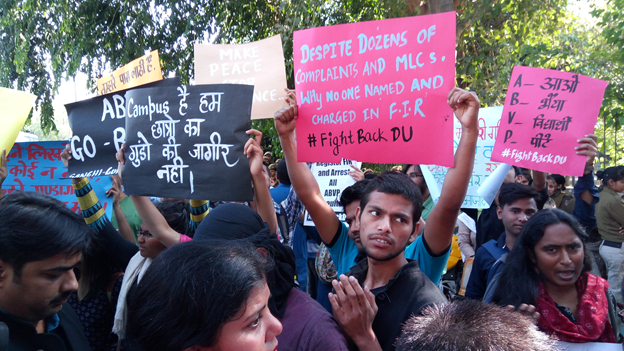 Shehla Rashid, JNU student said, “ABVP is backed by BJP. Their own party members are held for child trafficking and links with ISI so they should look into their own self before calling us anti-nationals.” When asked about the slogans for ‘Azadi’ -- which ABVP has criticised -- she said, “we are not asking azadi from our country but from injustice and inequality in the society. This is a fascist ideology which they have from which we are demanding Azadi and there is nothing wrong in that.”

The march was peaceful and students walked chanting slogans till they reached Parliament Street. The police had barricaded the street. Many people spoke and gave speeches in support of the students’ movement and demanded that on March 9, when Parliament resumes, this issue should be raised. Many speakers also spoke against the government’s proposal for a new sedition law which they said is a tool to curtail the freedom of speech and expression. 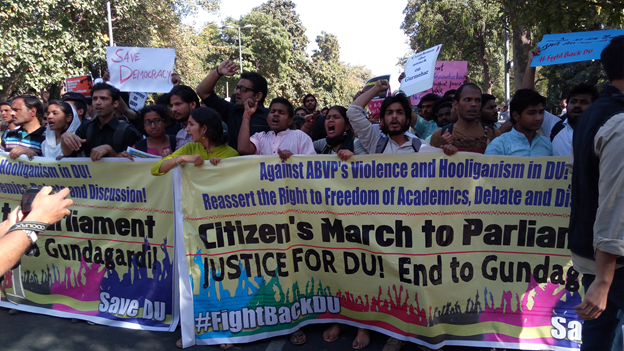 The missing student Najeeb Ahmed's mother was also present at the protest. She cried for her son who has still not been found after 3 months; Najeeb went missing after a brawl with ABVP members in the JNU campus. Students allege that the police and administration have not done their part in finding Najeeb, and the ABVP members involved in the brawl are still roaming around.

The lack of confidence in the media was highlighted. Nandita Narain, the president of DUTA said, “the media is hugely responsible for not reporting the true side of the picture and they are just government puppets and enslaved by corporates.” 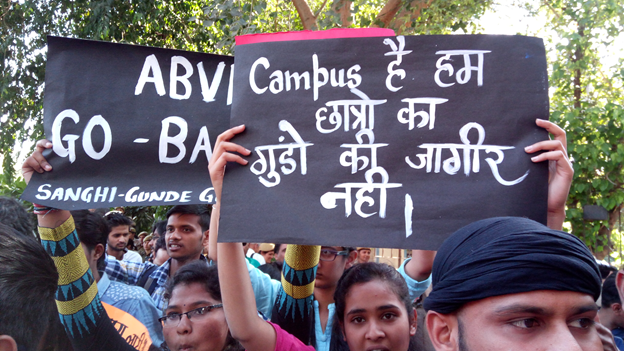 Umar Khalid, JNU student said, “Last year they did the same and this year too. ABVP should see that the entire DU is against them and this dictatorship will end. They always blame us for being anti- national and tell us to leave but we are not going anywhere and if anyone is going to leave will be these hooligans and their violent ideology.” He further added, “media is twisting things. They are reporting this event for being an issue between left and right and publicizing the matter. They should have some shame and report the truth.”

Political leaders who were present assured students that they will be raising this issue in Parliament. 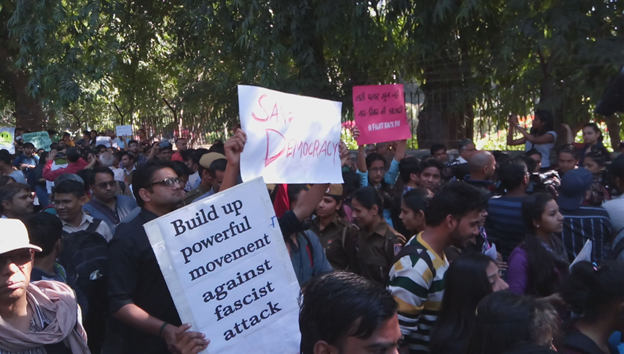 None of the sides are ready to compromise. ABVP yesterday also organized a rally in Punjab. Gurmehar Kaur unfortunately withdrew from the campaign following the threats she received, and her family is now being harassed. Many celebrities came forward in support of her. The role of media is very important at present to cover the issue and show a true picture of it to the people.

The protests against ABVP stem from the controversy at Ramjas College, where ABVP members opposed the invitation extended to Umar Khalid for an event on ‘cultures of protest.’ They were successful in ensuring that the invitation be revoked, after which students led a peaceful demonstration against ABVP’s interference. The students were attacked, as ABVP members pelted stones, shattered glass and hurled abuses. Since then, Delhi University has seen protests and counter protests, with today’s Mandi House protest being the latest.