NEW DELHI: Among the select few “self-proclaimed nationalist” journalists of the country, Gaurav Sawant of India Today Group ranks pretty high. His ‘concerns’ to ‘teach Pakistan a lesson,’ to eradicate Jihadi terrorism and to deliver justice to Muslim women and so on is for all to see. He has blindfolded himself on all other burning issues of the country so that his focus on these issues does not waiver. The problem is, he often falls prey of inane binaries in his discourses and then like a quack starts prescribing meaningless solutions. On 31st March, he posted a tweet about a programme scheduled on the India Today channel that night. There he insinuated that Indian Muslim women, compared to others are illiterate and backward. There was a strong reaction to that tweet. His justification, however, was that this was not his own view but rather he was ‘quoting’ one of the participants in the show. But, don’t we all know that the media promotes those opinions that it squarely favours? Moreover, to even quote something that is baseless and unsubstantiated simply shows one’s prejudice. A young journalist and News18 anchor Farah Khan has linked ‘Gaurav’s pride’ with the ‘current state of journalism’ and has raised certain important points, which you can read below. Among the mainstream media journalists, we rarely see this kind of courage where someone calls the bluff of another from their own fraternity by taking his name. Farah must be appreciated for this. – Editor, Media Vigil. 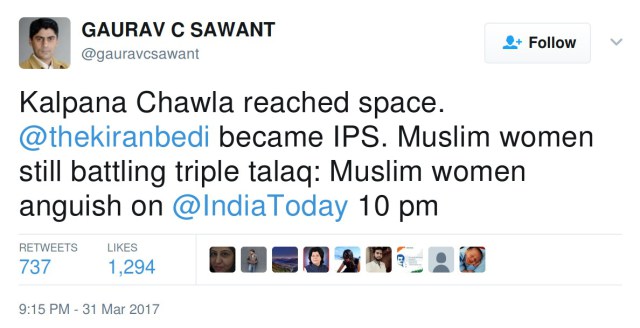 Gaurav Sawant, the journalist from India Today Group, got slammed after he posted a tweet on Muslim women on the night of 31st March. In the garb of critiquing Triple Talaq, he portrayed Muslim women as hapless victims. Twitteratti, especially Muslim women on twitter, found his journalistic style shallow and deplorable. The responses that Gaurav Sawant got post his disgusting tweet should have sent across a message to him.

Not just Gaurav Sawant, but a big section of the Indian media hardly knows anything about the Muslim community or Islam. When it comes to Muslim and Islam, they are rather sick with their prejudices. One can see this brazen display of ignorance almost every day on TV, in the newspapers and on various websites. The tweet and the subsequent show by Gaurav Sawant is yet another instance of this ailing mentality.

From this tweet of Gaurav Sawant, it would seem that Muslim women are forever stuck in a medieval era grappling with medieval traditions. Unlike their Hindu counterparts, instead of moving progressively forward, Muslim women are still fighting practices like triple talaq. Post Gaurav’s tweet, many Muslim women on Twitter took on Gaurav Sawant and bashed him for his bias. They trended the hashtag #MuslimWomenAchievers as part of which they brought forth many achievements made by Muslim women. Gaurav Sawant was tweeted with many names and photos of Muslim IPS officers, judges, scientists, players and so on. 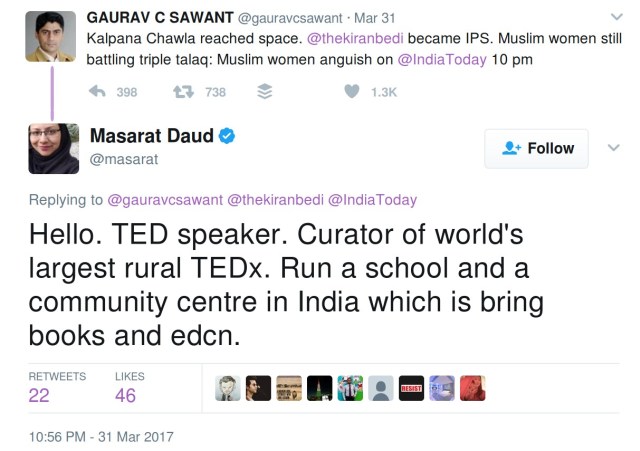 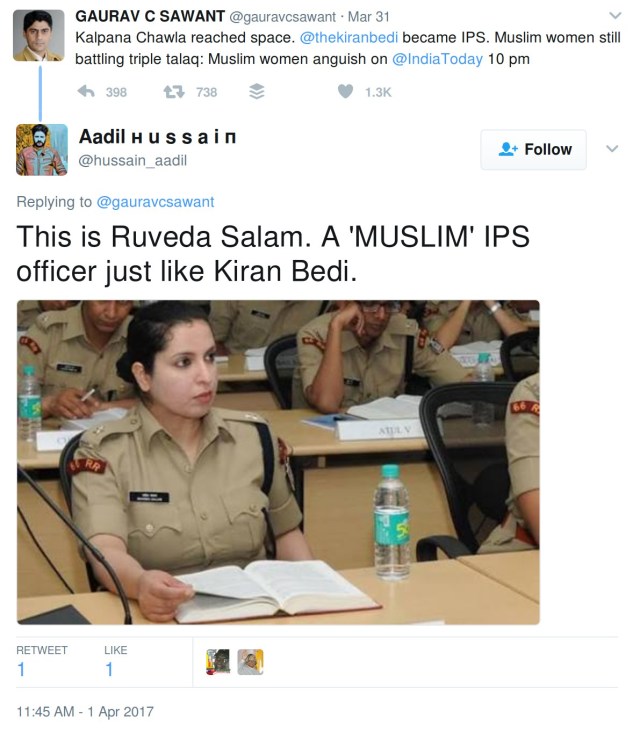 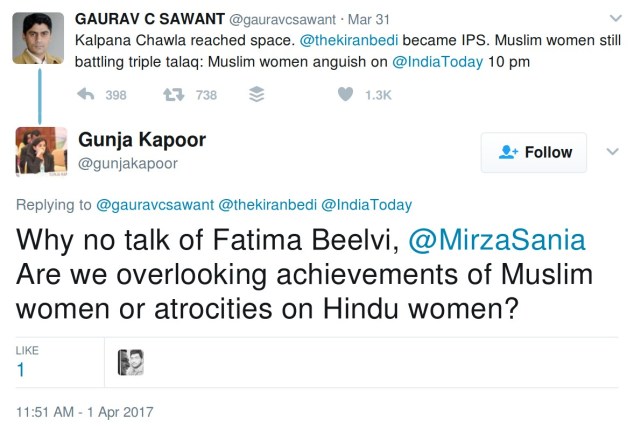 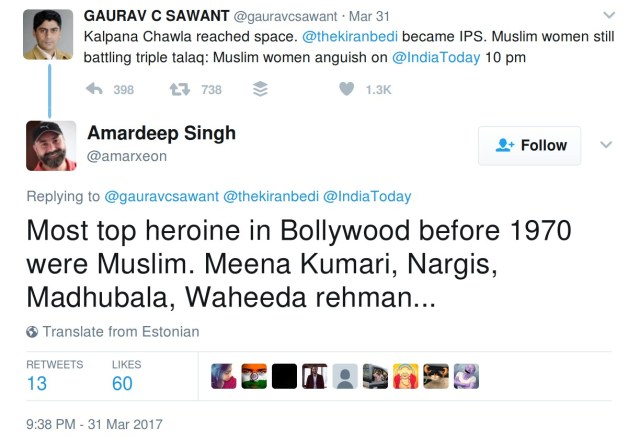 While writing this article, I am reminded of Khushboo from Chagauri in the town of Amroha. After doing B.Tech from AMU, Khushboo joined ISRO and in 2008 she became a part of the crucial expeditions like Chandrayan-1. In an interview, Khushboo clearly stated that she wants to contribute to the scientific progress of the country.

I am also reminded of Anousheh Ansari. Although she is not Indian, but an American citizen with Iranian roots and a successful businesswoman; it is important that we remember her too. She was the first self-funded tourist to space. 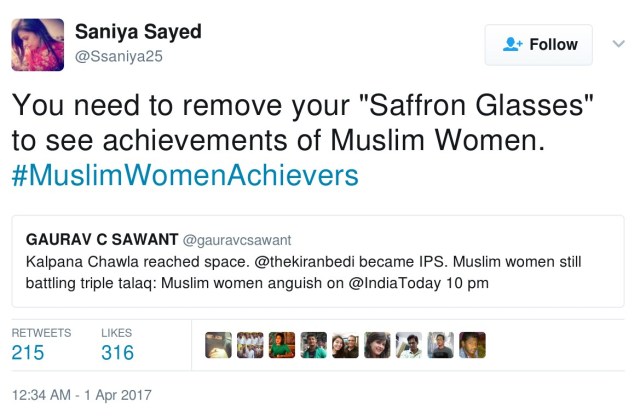 The truth is, for the last one year, a diabolical attempt to malign the Muslim community has been going on, in the name of triple talaq. The RSS, BJP and a section of the media are working in tandem to execute this obnoxious campaign against Muslims. The issue of “Triple Talaq in a single sitting” has been blown out of proportion. They are trying to create a facade that triple talaq is hindering the progress of Muslim women. This is nothing, but a hollow claim.

We still don’t have the exact figures of how many women are actually being affected by the instant triple talaq. Apart from RSS, BJP and Media, the social organisations that are working on this issue have not provided any substantial data yet. What we should ideally be doing is to identify women who are victims of Instant talaq and they should be taken to court where justice for them is guaranteed. After all, Supreme Court way back in 2002 has declared instant talaq illegal in the case of Shamim Ara. But it seems that reporters like Gaurav Sawant who have systematically infiltrated the journalism circle in India and even a large section of the society have entered a lightless tunnel from which there seems to be no way out.