April 23 is celebrated every year as World Book Day, with the event having a special connection to Spanish legends. While the world celebrated from 1995, books were exchanged on the very day, at Catalonia in Spain, since 1926.

Once upon a time… the story of St. George, a knight in shining armour who slayed the dragon, is where it all began. With clouds of terror wandering on the city of Mont Blanc, the inhabitants decided to appease the dragon by human offerings each day. Fate chose the Princess, and the dreaded day arrived. Hovering through ‘fog and filthy air’, the knight rescued the damsel in distress. As the tale goes, budding amidst the dragon blood was the red rose, which the Saint offered the Princess. Professor Meenakshi Sundriyal, from JNU’s School of Languages reflects on the event and how, “the stories make it rich.”

Remembering the day every year as the St George’s Day or Rose Day by offering a rose to the lady, the men uphold the ancient tradition. Deriving its inspiration from England’s celebration of Shakespeare’s death anniversary on the 23rd of April, the day of love and the love of literature were celebrated together. With 1926, Spain declared the very day as the death anniversary of famous Spanish writer, Miguel de Cervantes, famous for his ‘Don Quixote,’ with books being exchanged in return for roses. Professor Meenakshi, while commenting on the symbolic figure for art and culture in Spain and his writings, expressed “Don Quixote has caught the world, becoming an English vocabulary for someone living in a dream world.”

With the event fostering celebration of book, it has become a platform for,

“Traditionally and officially valuing our writers and books, which are gradually getting neglected in today’s world of 123 twitter characters.” 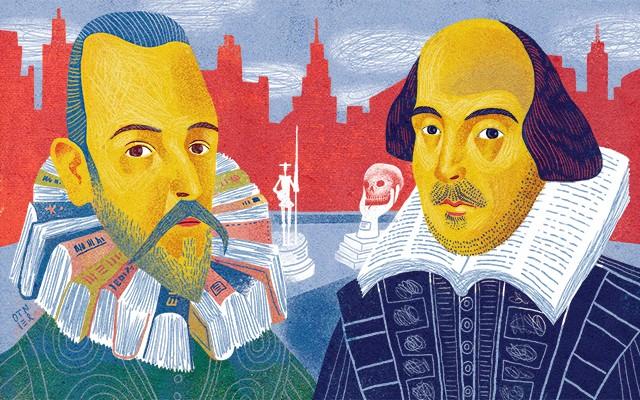 An air of mystery still surrounds the appearance of Miguel de Cervantes, the Prince of Wits. His description of self in the Prologue of ‘Exemplary Novel,’ has been the only source for his portraits. Unfamiliar in his features, his works and he remained unrecognised in his time. Unlike Shakespeare, Cervantes shared the same death date but not the same fame. Both the writers meddled in the see-saw of imagination and reality. Both writers, as Professor Meenakshi notes, “Wrote works that displaced the pulse of time they lived in, thus being symbolic of change of order.” The commonality that stringed them together was “the metaphor of “Life is but a dream within a dream.”

While ‘Don Quixote’ leaves one to interpret it as a story of dreamy idealist or tale of ridiculous buffoon, ‘A Midsummer Night’s Dream’ by Shakespeare, plays with smoke screens of reality, turning truth to lie and fiction to facts. Ambiguity to them, was the hero and his hamartia. Lost play of Shakespeare, which he titled ‘History of Cardenio’ and loosely based on the ‘Don Quixote’ show the creations they shared in common, apart from dates.

‘Instituto Cervantes’ mushrooming in India, is a non-profit organization, that promotes the Spanish language and culture through their language learning courses. Professor Meenakshi reflects on how, “One of the most towering writer of Spain, has his name utilized in the name of institution.” Throwing limelight on Spain’s culture, she expresses the manner in which such traditions “got associated with books and writers.” Lessons that such cultures leave behind is the importance of a reading culture growing beyond the literary circle. Nudging the citizens forward, she confesses, “A lot remains to be discovered by books which offer not only words but experiences of wisdom.”

Spain that gave us the ‘La Tomatina’ festival of squelching tomatoes and tapas to accompany our drinks, also gave us the book celebration culture. Spain that holds public reading of Don Quixote over two days during Rose day, is something that India should follow, according to Professor Meenakshi with its own writers. Effort that policy makers can strive towards is replacing “the culture of rat race with culture of reading.” This World Book Day, citizens should nurture beyond the “tokenism of the day, to an ever growing reading culture.”