This is a World of 170 Million Enslaved Children

Conflicts and disasters have a devastating impact on people’s lives, the United Nations reminds.

“They kill, maim, injure, force people to flee their homes, destroy livelihoods, push people into poverty and starvation and trap people in situations where their basic human rights are violated.”

Of this total of 168 million children victims of modern slavery, about 100 million boys and 68 million girls.

Forced labour is estimated to generate around 150 billion dollars a year in illegal profits. 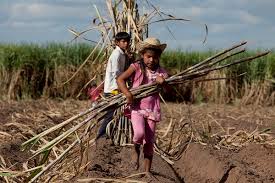 Amid such a huge human tragedy, children are often the first to suffer as schools are destroyed and basic services are disrupted, the world body reports.

“Many children are internally displaced or become refugees in other countries, and are particularly vulnerable to trafficking and child labour. Ultimately, millions of children are pushed into child labour by conflicts and disasters.”

This why on the occasion of the 2017 World Day Against Child Labour, marked June 12, the UN focuses on the impact of conflicts and disasters on child labour.

“Urgent action is needed to tackle child labour in areas affected by conflict and disaster. If the SDG (Sustainable Development Goals) Target 8.7 which aims to “eradicate forced labour, end modern slavery and human trafficking and secure the prohibition and elimination of the worst forms of child labour” is to be achieved by 2030.”

The UN stresses the need to intensify and accelerate action to end child labour, including in areas affected by conflict and disasters. “And we need to do it together.”

As the world strives to achieve the elimination of child labour by 2025, on this World Day Against Child Labour, says the International Labour Organization (ILO), “let’s join forces to end child labour in areas affected by conflict and disaster!”

Child labour and forced labour in conflicts and humanitarian settings will be discussed at the IV Global Conference on Child Labour (Buenos Aires, 14-16 November 2017).

For its part, the UN Children Fund (UNICEF) warns that child labour deprives children of their right to go to school, exposes them to violence, and reinforces intergenerational cycles of poverty.

“Yet, this serious violation of human rights is not inevitable. Child labour is preventable through integrated approaches that simultaneously address poverty and inequity, improve access to and quality of education and mobilise public support for respecting children’s rights.”

UNICEF also reminds that, worldwide, about 168 million children aged 5 to 17 are engaged in child labour, accounting for almost 11 per cent of all children.

The most recent figures, based on statistical evidence from UNICEF, ILO and the World Bank, show a decline of about one third since 2000.

While that is positive news, progress is far too slow, the UN specialised agency reports, adding that the continued persistence of child labour poses a threat not only to the health and well being of children, but also to national economies and the achievement of global development goals.

Child labour is defined as work for which the child is too young – i.e., work done below the required minimum age.

The Convention on the Rights of the Child (CRC) recognises every child’s right, “to be protected from economic exploitation and from performing any work that is likely to be hazardous or to interfere with the child’s education,” or that is likely to harm the child’s health or, “physical, mental, spiritual, moral or social development.”²

Other international instruments further define a child’s right to be protected from the “worst forms of child labour,” including recruitment in armed conflict, sexual exploitation and drug trafficking.

The lives and futures of millions of children are in jeopardy, UNICEF warns. “We have a choice: Invest in the most excluded children now or risk a more divided and unfair world.”

“Every child has the right to a fair chance in life. But around the world, millions of children are trapped in an intergenerational cycle of disadvantage that endangers their futures – and the future of their societies.”