The Nobel assembly at Karolinska Institutet awarded the 2017 Nobel Prize in Physiology or Medicine jointly to American scientist trio Jeffrey C. Hall, Michael Rosbash and Michael W. Young for their discoveries of molecular mechanisms controlling the circadian rhythm- in simple words 24-hour body clock. According to the Nobel committee’s citation, Jeffrey C Hall, Michael Rosbash and Michael W Young were recognised for their findings explaining “how plants, animals and humans adapt their biological rhythm so that it is synchronised with the Earth’s revolutions.’’ The team identified a gene within fruit flies that controls the creatures’ daily rhythm, known as the “period” gene. This gene encodes a protein within the cell during the night which then degrades during the day.

Who are the Winners?

Jeffrey C. Hall is an American biologist and chronologist, received his doctorate in 1971 from University of Washington and is presently Professor Emeritus of Biology at Brandeis University. Hall spent his career examining the neurological component of fly courtship and behavioural rhythms. Michael Rosbash obtained his doctoral degree in biophysics from MIT in 1970. He is also a Professor at Brandeis university and investigator at Howard Hughes Medical Institute. Michael W. Young received his doctorate in genetics from university of Texas at Austin in 1975. He is a professor of genetics at Rockefeller University in New York and has dedicated over three decades to research studying genetically controlled patterns of sleep and wakefulness within Drosophila melanogaster.

What did they do?

Living organisms on Earth are adapted to its rotation and revolution around the Sun. For many years we have known that living species comprising humans have an inner biological clock that helps them forestall and adjust to the regular rhythm of the day. But how does this clock actually works? “Jeffrey C. Hall, Michael Rosbash and Michael W. Young were able to look inside our biological clock and explain its inner workings. Their discoveries explain how plants, animals and humans adapt their biological rhythm so that it is synchronized with the Earth's revolutions.” The Nobel Prize committee said in a press release.

First study on rhythm patterns was reported in 1729, when astronomer Jean Jacques d’Ortous de Mairan placed a mimosa plant into a dark room and noticed that the plant’s leaves still opened and closed at the same times every day. 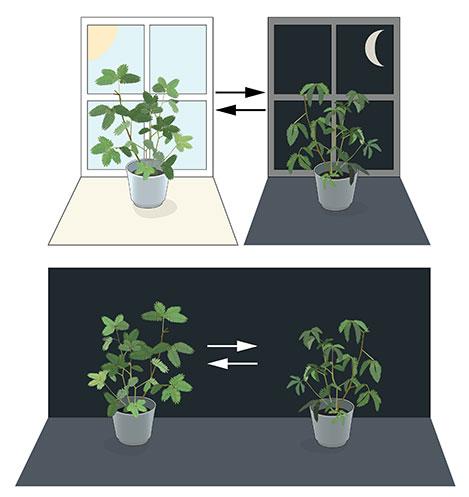 Fig 1- An internal biological clock. The leaves of the mimosa plant open towards the sun during day but close at dusk (upper part). Jean Jacques d'Ortous de Mairan placed the plant in constant darkness (lower part) and found that the leaves continue to follow their normal daily rhythm, even without any fluctuations in daily light. Source- nobelprize.org

Other researchers found that not only plants, but also animals and humans, have a biological clock that helps to prepare our physiology for the variations of the day. This regular adaptation is referred to as the circadian rhythm, originating from the Latin words circa meaning "around" and dies meaning "day". Hall and Rosbash, who were working at Brandeis University near Boston, as well as Young, who was (and still is) based at the Rockefeller University in New York, decided to dig deeper. By 1984, they were able to isolate the period gene. Hall and Rosbash found that the protein the period gene encoded, which appeared to build up during the night and degrade during the day and the cycle repeated itself. They assumed that the period protein was somehow crossing into the nucleus to shut off its own gene, in what they called a transcription-translation feedback loop. The trio went on to make other discoveries that explained how circadian rhythms are created and sustained. They also found additional proteins that activate the period gene. “The paradigm-shifting discoveries by the laureates established key mechanistic principles for the biological clock,” the Nobel committee said. During the following years other molecular components of the clockwork mechanism were elucidated, explaining its stability and function.

Importance of their work 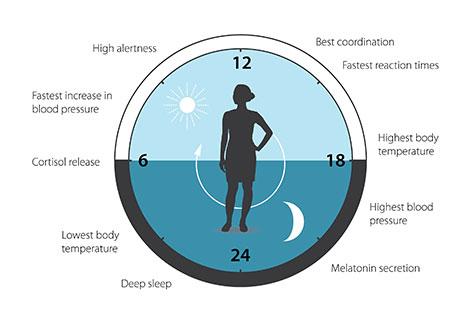 In humans, these biological clocks forestall various activities throughout the day, from waking up to sleeping and eating, by regulating things like hormone levels, temperature, and metabolism. Our circadian rhythm is closely tied to our health and well-being (which helps explain why jet lag or a late-night shift work can be so draining and harmful). These clock genes control the production of insulin and other hormones involved in maintaining how our bodies process food. Disruption of the genes through sleep deprivation or mutation alters brain functions and has been tied to sleep disorders, depression, bipolar disorder and memory defects. Out of whack circadian rhythms also increase a person’s risk for cancer, obesity, diabetes and other metabolic disorders.

Apart from this work, there were some other ground-breaking discoveries that were being considered for award this year. It comprised of work by Dr. James P. Allison of the MD Anderson Cancer Center, Gordon J. Freeman of the Dana-Farber Cancer Institute, and Dr. Arlene Sharpe of Harvard Medical School; who worked on how to harness the body’s immune system to fight cancer. Another contender was Crispr, a gene-editing system that is rapidly transforming medical research. It was discovered by four scientists: Jennifer A. Doudna at the University of California, Berkeley, Emmanuelle Charpentier of the Max Planck Institute for Infection Biology in Berlin, Feng Zhang of the Broad Institute and George Church of Harvard. Both these works remain strong candidates for future Nobel.

The Nobel Assembly, consisting of 50 professors at Karolinska Institutet, awards the Nobel Prize in Physiology or Medicine. Its Nobel Committee evaluates the nominations. Since 1901 the Nobel Prize has been awarded to scientists who have made the most important discoveries for the benefit of mankind.