The Royal Swedish Academy of Sciences awarded the Nobel Prize in Physics 2017 with one half to Reiner Weiss and other half jointly to Barry C. Barish and Kips S. Thorne “for decisive contributions to the LIGO (Laser Interferometer Gravitational-Wave Observatory) detector and the observation of gravitational waves.” In announcing the award, the Royal Swedish Academy called it “a discovery that shook the world.”

Rainer Weiss obtained his PhD in 1962 from MIT. He joined MIT as faculty in 1964 after teaching in Tufts university for a short time and post-doctoral work at Princeton University. He is the brain behind the laser interferometric technique which is the basic operation of LIGO. Barry Clark Barish obtained his Ph.D. in experimental high energy physics in 1962 at the University of California, Berkeley. He joined Caltech in 1963 as part of a new experimental effort in particle physics using frontier particle accelerators at the national laboratories, presently is a Linde Professor of Physics, emeritus at California Institute of Technology. Kip Stephen Thorne obtained his PhD in 1965 from Princeton University. He was the Feynman Professor of Theoretical Physics at the California Institute of Technology (Caltech) until 2009. He continues to do scientific research and scientific consulting, most notably for the Christopher Nolan film, Interstellar.

From left: Rainer Weiss, Barry Barish and Kip Thorne, the architects and leaders of LIGO, the Laser Interferometer Gravitational-wave Observatory

The history of gravitational waves dates back to 13.7 billion years ago just a fraction of seconds after Big Bang, when scientists believe gravitational waves left an everlasting inscription on the cosmos that may still be perceptible today. Einstein predicted the existence of gravitational waves over a century ago in his General Theory of relativity. In this theory Einstein explained what gravity actually is. Although much before him Newton showed that gravity is always an attractive force, he did not explain exactly what gravity was or how it transmitted through vast distances. Einstein explained that gravity is the result of objects with mass warping the very fabric of space itself. Space in this model is like a large rubber sheet, and in the presence of mass, the rubber sheet can be warped, stretched and compressed. 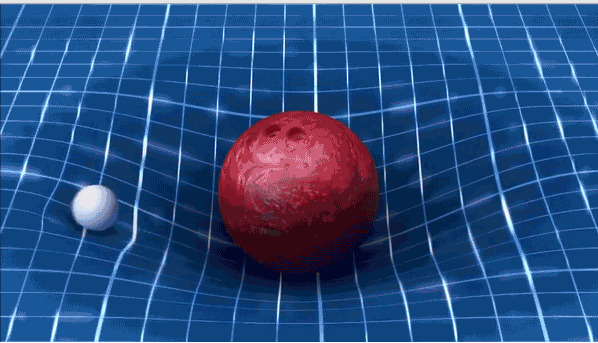 Furthermore, Einstein went on to show that gravity moves at precisely same speed as light. This is where gravity waves come in. An object with mass can create ripples in fabric of space that move outwards with speed of light. Although theoretically any object with mass can create these ripples, they are only noticeable to our sensitive scientific equipment when the processes that create them are extreme, such as collision of black holes or neutron stars. But Einstein himself was unsure whether this was merely a mathematical illusion, and concluded that, in any case, the signal would be so tiny that it would “never play a role in science”.

In the mid-1970s Weiss and Thorne, began on the decades-long quest to detect gravitational waves, which they believed could revolutionise our understanding of the universe. Weiss designed a detector, called a laser-based inferometer, that he believed would be capable of measuring a signal so tiny that it could easily be screened by the background murmur of the ocean waves. Thorne, a theorist, began making crucial predictions of what the signal of a gravitational wave originating from two black holes colliding would actually look like. Independently, Ronald Drever, a Scottish physicist, also began building prototype detectors in Glasgow and after moving to Caltech, he, Weiss and Thorne formed a trio that laid the groundwork for LIGO. Drever died in March after suffering from dementia, and while the Nobel prize is not normally awarded posthumously, he is widely recognised as having made a decisive contribution. Barry Barish, a former particle physicist at California Institute of Technology (now emeritus professor) came to the project at a much later stage, but is often credited for making LIGO happen. When he took over as its second director in 1994, the project was at risk of being cancelled. Barish turned things around and saw it through to construction. In the end, detection required a peerless collaboration between experimentalists, who built one of the most sophisticated detectors on Earth, and theorists, who figured out what a signal from two black holes colliding would actually look like. 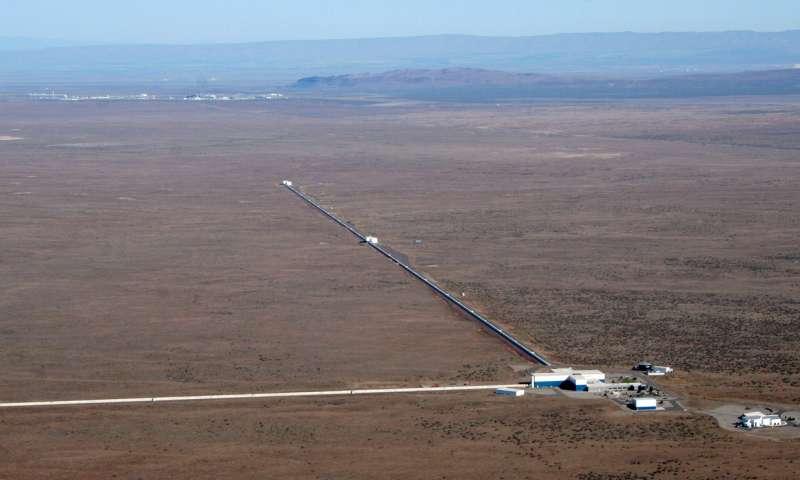 LIGO, the Laser Interferometer Gravitational-Wave Observatory, is a collaborative project with over one thousand researchers from more than twenty countries. It is funded by the National Science Foundation, consists of two enormous science experiments: One is in Louisiana; the other is located in Washington state. Both are massive L-shaped tubes. Each arm of the tube is 2.5 miles long. These instruments are called interferometers, and their design is based on work Weiss conducted in the 1960s.

Here’s how they work. During the experiments, a laser beam is split equally between the two arms. At the end of each arm is a mirror, which reflects the laser back to the starting point. What LIGO is looking for is evidence that gravitational waves are distorting space-time enough that one of the arms becomes temporarily longer than the other. These changes can be incredibly tiny, since LIGO is sensitive enough to detect a change in distance smaller than the width of a proton. 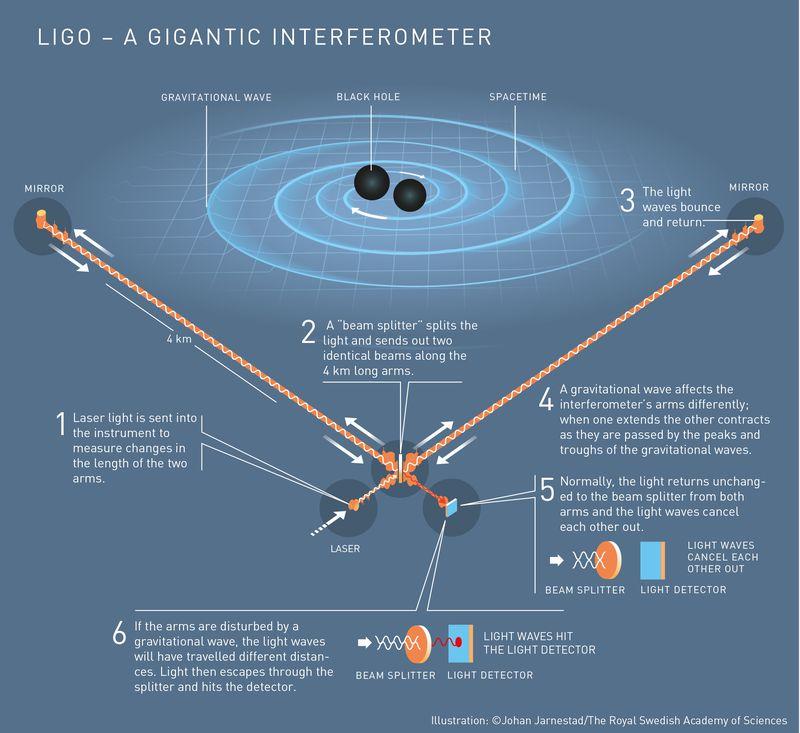 If a wave is detected in one of the sites, it has to be corroborated with the other site (to make sure it's not just a false signal from local automobile traffic or other disturbances). LIGO was first set up in 2002, and for years it found nothing. In 2010 it was shut down for an upgrade, which extended its range. When it was turned back on in 2015, it almost immediately began hearing the waves. By listening in on these loud waves, the scientists are able to reconstruct the cataclysmic events that created them. Just from the two detectors, scientists can determine the mass of the black holes and how far away they are, roughly map where in the sky they are, and distil some information about the shape of their orbits.

First gravitational wave was detected by LIGO on 14 September 2015. The phenomenon detected was the collision of two giant black holes, one 35 times the mass of the sun, the other slightly smaller, 1.3 billion light years away. At the start of the 20 millisecond “chirp” in the signal, the two objects were found to be circling each other 30 times a second. By the end, the rate had accelerated to 250 times a second before meeting in a violent collision. Since then, three further black hole collisions have been made and rumours are afoot that the consortium may have also observed the collision of a pair of neutron stars. In the future, scientists hope to detect supernovae, pulsars and the insides of stars as they collapse into black holes. A network of gravitational-wave observatories could even allow us to gaze back to almost the beginning of time itself. This past year, a third detector, an Italy-based machine called VIRGO, turned on and also began sensing gravitational waves. In September, both VIRGO and LIGO confirmed a new set of gravitational waves emanating from the smoking gun of two black holes that collided 1.8 billion years ago. Detectors have confirmed four gravitational waves, and many more are certain to come. And, again, this is a whole new field of astronomy, a whole new eyepiece upon which to observe the universe. Here are some cool things the next era of gravitational wave astronomy could accomplish.

1) Seeing farther back in time

One problem with our current fleet of telescopes is that they can’t see back to the very early universe. If you look with visible light as far as we can look in the universe, the universe is no longer transparent; it becomes opaque. With LIGO, we could potentially listen in on the gravitational waves emanating from the early universe, or even the Big Bang, and gain a better understanding of how it formed.

A century ago, Einstein published his theory of general relativity, and it has dominated our understanding of gravity ever since. But physicists (and Einstein himself) have long speculated the theory isn’t complete, as it doesn’t play well with the laws of quantum mechanics. Gravitational waves could help physicists put general relativity to harder and harder tests to see where it fails.

Neutron stars are the extremely dense cores of collapsed stars that can emit large amounts of gravity. What’s cool about them is that they also produce light. LIGO can help us detect neutron star collisions or neutron star black hole collisions.

4) Finding the source of dark matter

Dark matter is theorized to make up 27 percent of all the matter in the universe. But we’ve never seen dark matter (it’s dark!), and we don’t know where it comes from. Matter creates gravity. Dark matter is predicted to interact in terms of gravity but not light. Perhaps gravitational waves can help us trace the origins of dark matter. It could exist in the form of many tiny black holes. It could be the remnants of "primordial" black holes created at the beginning of the universe. We don’t know.

The universe is a big, dark place. We might find sources [of gravity] we were not expecting, and the chances of finding these strange new objects only increases as the power of LIGO increases and its counterparts come online.

So far all sorts of electromagnetic radiation and particles, such as cosmic rays or neutrinos, have been used to explore the universe. However, gravitational waves are direct testimony to disruptions in space-time itself. This is something completely new and different, opening up unseen worlds. A wealth of discoveries awaits those who succeed in capturing the waves and interpreting their message, as quoted in the Nobel Prize committee press release.