What Is Cryo Electron Microscopy? Everything You Need To Know About The Work That Just Won The 2017 Nobel Prize In Chemistry

The Royal Swedish Academy of Sciences has awarded the Nobel Prize in Chemistry 2017 to Jacques Dubochet, Joachim Frank and Richard Henderson "for developing cryo-electron microscopy for the high-resolution structure determination of biomolecules in solution".

For high resolution imaging of molecules at scales as tiny as just tenths of a nanometre, and help decode their functions, structural biologists have long depend on two tools: nuclear magnetic resonance, or NMR, spectroscopy and X-ray crystallography. But both techniques have limitations. X-ray crystallography creates a 3-D picture of a molecule’s structure by bouncing X-rays off of a crystallized version of a molecule and reconstructing the molecule’s structure based on those diffraction patterns. But a lot of proteins cannot be crystallized, so their structures are inaccessible. NMR, meanwhile, allows researchers to study biological molecules in a solution, such as water — but its use has generally been limited to relatively small proteins.

Drying out of organic molecules while imaging was another problem. In 1975 Henderson used bacterial proteins, still within their membrane so that they retained their structures, within the microscope and covered the membrane with a glucose solution to keep it from drying out. He used a weaker electron beam to minimize the damage. Because the beam was weaker, the images were fuzzier than they would have been with a beam at full strength. But since the proteins in his sample happened to be oriented in the same direction, Henderson was able to compile the fuzzy images from each protein in the membrane to generate one sharper image. The image, wasn’t quite at the atomic scale yet and required other advances. Unlike Henderson’s proteins, most proteins in a sample wouldn’t all be oriented in the same direction and suitably ready to assemble. Frank’s solution, published in 1981, was to create a computer algorithm to scan the images to look for any proteins oriented in the same direction and group them together. 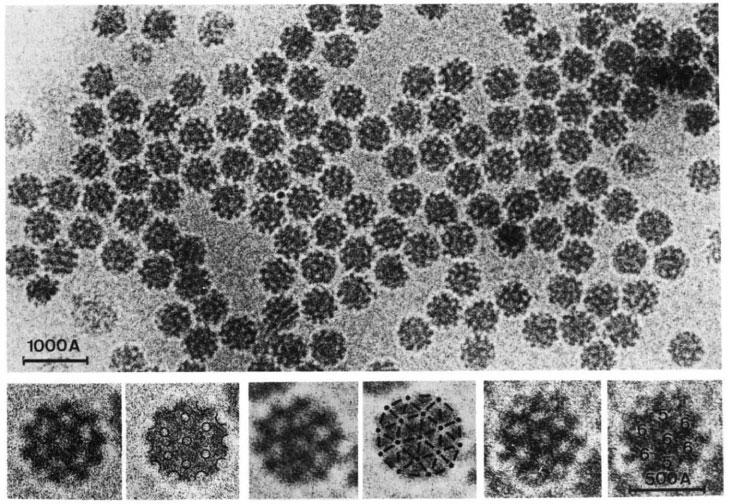 Fig- In 1984, Jacques Dubochet used a thin layer of “vitrified water” — flash frozen at a temperature of ‒196° Celsius — to protect this sample of Forest Semliki virus from dehydration in the vacuum of an electron microscope. Each virus is about 500 Ångströms, or 50 nanometers, across. That technique became a key component of what’s known as cryo-electron microscopy. Source- M. ADRIAN ET AL/NATURE 1984

Meanwhile, Dubochet was considering the problem of dehydration. Henderson’s glucose solution wouldn’t work for most biomolecules. Freezing samples also wouldn’t work, because ice crystals distort molecules’ shapes. But, he realized, if the water were to cool extremely rapidly to ‒196 ° Celsius — in ethane cooled by liquid nitrogen — it would solidify without forming ice crystals, instead becoming vitreous, or glassy. In 1984, he showed that viruses, when covered with a fine layer of vitrified water, could be safely studied in the electron microscope.

That cryo-EM technique merged with Henderson’s efforts, and in 1990, Henderson produced the first cryo-EM image of a protein at the atomic scale. The following year, Frank prepared ribosomes, cellular structures that help make proteins, using the cryo-EM method. In 2015, structural biologist Sriram Subramaniam of the National Cancer Institute in Bethesda, Md., reported improving the resolution of cryo-EM images to an ultrafine 0.22-nanometer scale — finally matching the impressive resolution of images produced by X-ray crystallography, the current gold standard. Over the last few years, cryo-EM has begun to demonstrate its potential, including revealing the structure of larger and larger objects, such as viruses. In 2016, cryo-EM was used to map the structure of the Zika virus (SN: 4/30/16, p. 10), helping to identify possible regions to target with a vaccine or antiviral compounds 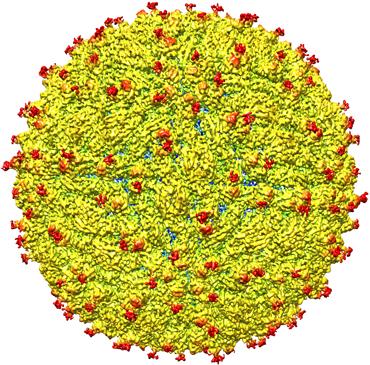 Fig- In 2016, scientists mapped the structure of the Zika virus for the first time using cryo-electron microscopy, revealing sugars (in red) that could help the virus target neural stem cells. Purdue university image/courtesy of kuhn and rossmann research group.

“Following these discoveries, the electron microscope’s every nut and bolt have been optimised. The desired atomic resolution was reached in 2013, and researchers can now routinely produce three-dimensional structures of biomolecules. In the past few years, scientific literature has been filled with images of everything from proteins that cause antibiotic resistance, to the surface of the Zika virus. Biochemistry is now facing an explosive development and is all set for an exciting future” as quoted in Nobel prize committee’s press release.