BHOPAL: “Yeh college hai, jail nahin”. The students of Bhopals National Law Institute University are sitting in protest against a list of omissions and commissions by the authorities. No one has come forth to listen to them, a grouse that the students share with the social media now aflood with their tweets in a bid to get media attention.

The students have also written to the Chairman of the General Council of the University, the Chief Justice of Madhya Pradesh High Court asking hm to intervene. The letter gives a specific example of what the students describe as a “blatant display of arbitrariness” with the “administration of the faculty of the University” joining hands to “pass a student who was failing by more than 10 marks.”

The letter points out, “the answer had in fact been evaluated, struck out, and marked 0, showing that it had not been omitted in the initial correction…If the marks were increased for only one student after the professor knew her identity, there is a reasonable apprehension of bias involved, especially since the requests of other students failing by a few marks had been ignored.”

This, according to the students, was the final straw in a series of accumulating grievances that includes delayed publication of the exam results, the inability of the faculty to complete the syllabus in some subjects on time. The students also want the administration to lift the hostel curfew, and to extend the timings of the library to longer hours which presently opens only till 9pm.

The law students also point to the administration’s rigidity in granting medical leave, even in genuine and extreme cases. Students are required to maintain an attendance of 70% failing which they are made to repeat the year. The letter, copies of which have been sent out to others as well, points out that students suffering from multiple bone fractures were also forced to attend classes.

The letter to the Chief Justice of Madhya Pradesh High Court also points out “As a law university, it is even more imperative for the University to ensure that the incidents of the nature being alleged are dealt with in a fair and transparent manner in accordance with law and not swept under the carpet. We also understand that despite several protests in the past by the student community demanding accountability of the administration and safety inside the campus, effective steps have not been taken to address these issues apart from setting up committees.”

The students, now on protest for three days, have asked for the ouster of Director Professor SS Singh who they claim had first said he would listen to their problems but then left the campus and returned to scold them, and threaten action. He finally did speak to them the next but the protest has gathered momentum and the students are no longer willing to be persuaded. In a statement the striking students maintained that “multiple instances of rampant corruption, sexism, castism, moral policing, and lack of financial transparency have made the student body lose confidence in the autocratic rule that has subsisted for the past ten years.” 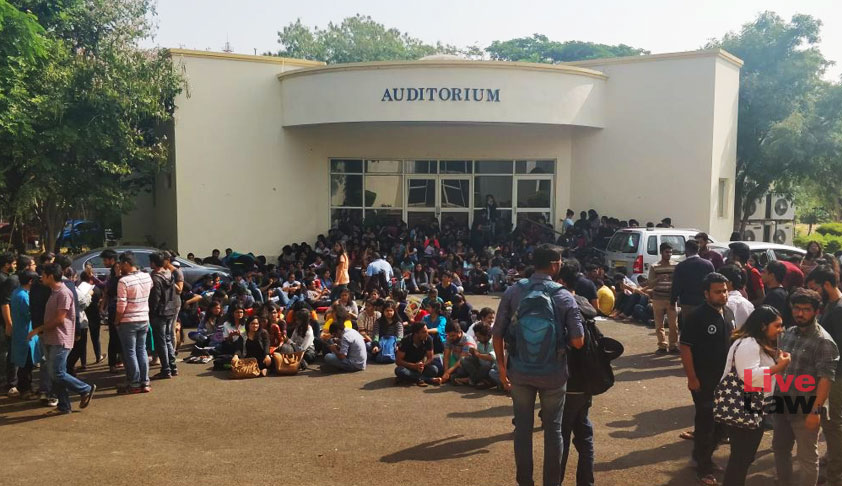