Is India The Diabetes Capital Of The World?

Is India The Diabetes Capital Of The World?

Diabetes might be one of the most talked about diseases across the world and especially in India, but awareness about it can well be estimated by the fact that India today has more people with type-2 diabetes than ever before.

India’s population suffering from diabetes has dramatically increased from 11.9 million in 1980 to 64.5 million in 2014, making it to the top three countries with high diabetes population along with China and the United States.

Often known as the diabetes capital of the world, India has been witnessing an alarming rise in incidence of diabetes according to the International Journal of Diabetes in Developing Countries. According to a World Health Organization (WHO) fact sheet on diabetes, an estimated 3.4 million deaths are caused due to high blood sugar in the world.

To put it simply, it is a medical condition that is caused due to insufficient production and secretion of insulin from the pancreas in case of Type-I diabetes and defective response of insulin Type-2 diabetes. Under normal body circumstances, blood glucose levels are tightly controlled by insulin, a hormone produced by the pancreas. Insulin lowers the blood glucose level.

When the blood glucose elevates (for example, after eating food), insulin is released from the pancreas to normalise the glucose level. In patients with diabetes, the absence or insufficient production of insulin causes hyperglycemia.

Diabetes is a chronic medical condition, that is, it can be curbed at the initial level by introducing lifestyle changes and controlled after its incidence through medicines in early stages and administration of external insulin in advanced stages. But it would not be wrong to say that it cannot be cured completely and lasts a lifetime.

For the first time researchers have created synthetic cells that mimic how natural beta cells sense blood sugar concentration and secrete just the right amount of insulin. A research team led by Dr. Zhen Gu at university of North Carolina developed these synthetic cells. Experiments with mice show that these cells can regulate blood sugar for up to five days, researchers report online October 30 in Nature Chemical Biology. 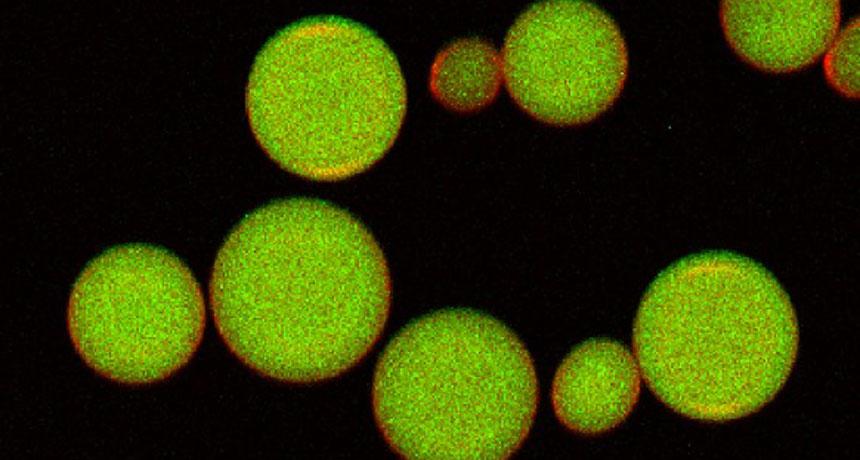 If the mouse results translate to humans, diabetics could inject these artificial beta cells to automatically regulate their blood sugar levels for days at a time.

Fashioned from human-made materials and biological ingredients like proteins, these faux cells contain insulin-filled pouches much like the insulin-carrying compartments inside real beta cells. And, similar to a natural beta cell, when one of these artificial beta cells is surrounded by excess blood sugar, its insulin sacs fuse with its outer membrane and eject insulin into the bloodstream. As blood sugar levels drop, insulin packets stop fusing with the membrane, which stems the cell’s insulin secretion. 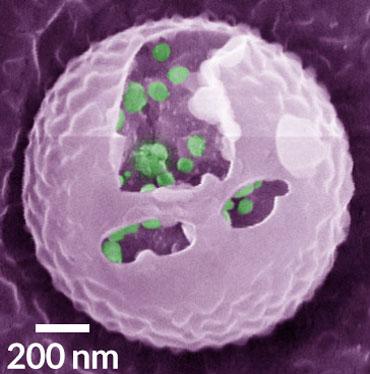 (PACKING INSULIN- Each artificial beta cell (as seen in this fluorescent image) contains insulin-stuffed pockets (green) that fuse with the cell’s outer membrane and release insulin into the bloodstream when blood sugar levels are too high. Credits- GU LAB/UNC-NC STATE)

Unlike transplanted beta cells — or other types of real cells genetically engineered to release insulin for diabetes treatment (SN: 1/15/11, p. 9) — these artificial cells could be mass-produced and have a much longer shelf life than live cells.

When Gu and colleagues injected their synthetic cells into diabetic mice, the animals’ blood sugar levels normalized within an hour and stayed that way up to five days, when the cells ran out of insulin. The researchers plan to perform further tests on lab animals to assess the fake cells’ long-term health effects before running clinical trials

The creation of the new faux cells not only poses a potential diabetes treatment, “but it’s also a bellwether. It’s slightly ahead of its time.”