A Man Was Hacked To Death On Camera, But The Media And Politicians Are Obsessed With Mani Shankar Aiyar

The photo depicts a screen-grab from the shocking video

NEW DELHI: News broke yesterday of a horrific viral video shot in Rajasthan’s Rajsamand district, where a 45 year old labourer Mohammad Efrazul was hacked to death, with the assailant Shambhu Lal heard chanting, “love jihadis you will meet the same fate.” If you missed this altogether, I wouldn’t blame you -- because our media and politicians were obsessed with another piece of news: Mani Shankar Aiyar called Prime Minister Narendra Modi a “neech” and the news cycle couldn’t get enough of it.

Efrazul was killed in the name of ‘love jihad’ although he had nothing to do with it. Rajasthan -- in recent months -- has seen numerous incidents of religiously-motivated killings. The impunity accorded to the assailants by the government and police, and the very fact that these lynchings and attacks are being recorded and publicly circulated attests to the complete absence of the rule of law. In the video, the assailant is seen chasing the helpless labourer who cries out for help, hacking him to death while an accomplice films the scene, and then rushes back to the camera mid-murder to warn others of a similar fate.

Of course, there’s been not a word of condemnation of the brutal crime. Prime Minister Narendra Modi is silent, BJP President Amit Shah is silent, a few words were finally dragged out of Rajasthan Chief Minister Vasundhara Raje . The list goes on…

The Opposition too has been quiet. Soon to be Congress President hasn’t said a word thus far. A handful of people in the party have spoken. Kapil Sibal tweeted, “Hatred and venom of love-jihad seen in open hacking of a hapless victim in Rajasthan . Torchbearers of violence getting away. Speak up.” Sachin Pilot spoke about the absence of law in BJP-ruled Rajasthan, saying, “there is no fear of law here, no fear of police... there is no government. We must set an example where people must fear that there is a government that will set certain rules.”

You’d think silence was the norm amongst our politicos. But wait, there was another piece of news that prompted a lot of political chatter all through the day yesterday. Congress leader Mani Shankar Aiyar dominated the news headlines for a remark calling the Prime Minister a "neech aadmi.”

The comment received widespread attention, with the political establishment breaking into a cacophony (in sharp contrast to the Rajasthan response) to ferociously condemn the statement. "Mani Shankar Aiyar has called me neech and from nichli jaati (lower caste). Is this not an insult to Gujarat? Is it not an insult to India's great values? But people of Gujarat will take revenge on December 18 and teach you the precise meaning of neech," PM Modi said at an election rally in Surat.

The BJP launched a full out attack, and the Congress too was quick to condemn the statement.

“Neither shocked nor surprised by Mani Shankar Aiyar’s referring to PM as ‘Neech.’ This is the culture of the Congress Party. People of Gujarat will punish anti-poor, anti-Dalit, anti-Tribal and anti-OBC Congress,” Amit Shah tweeted.

Congress Vice President Rahul Gandhi took to Twitter to post, “BJP and PM routinely use filthy language to attack the Congress party. The Congress has a different culture and heritage. I do not appreciate the tone and language used by Mr Mani Shankar Aiyer to address the PM. Both the Congress and I expect him to apologise for what he said.” 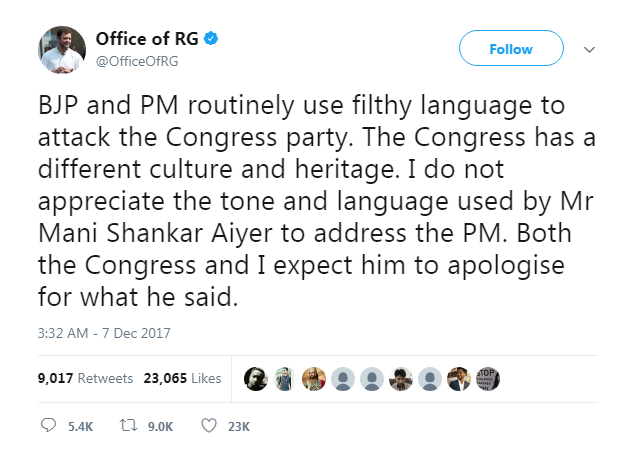 The Congress promptly suspended Aiyar from the primary membership of the party and issued him a show-cause notice for his remark.

I, for one, am horrified at how things have played out in the media and amongst our political elite. A man was hacked to death on the basis of his religion, the crime was recorded on camera and circulated to issue a dire message, and the media and our politicians remained obsessed with what was relatively a piece of ‘non-news.’

The categorical condemnation of Aiyar’s comments from all sides is proof that our politicians have a tongue, and can use it along with decisive action in the form of Aiyar’s suspension from the party. Unfortunately, on matters that truly count -- such as religiously motivated hate crimes and the impunity attached to them -- the entire establishment chooses to remain silent.