Penguin's decision to invite the actor to deliver its annual lecture has met with criticism.

NEW DELHI: Priyanka Chopra, the international icon, was invited by Penguin Random House, India, to deliver the eleventh ‘Penguin Annual Lecture’ on December 26, 2017. The lecture was first started in 2007 as a means of bringing leading writers, artists, and thinkers, and key personalities, from India and abroad, in close conversation with the Indian audiences, and, the discussion this year, was based on the theme of ‘Breaking The Glass Ceiling - Chasing A Dream.’ The Bollywood star was also the first woman to have been invited, joining a long list of eminent deliverers, which includes greatly established men such as the Dalai Lama, the popular fiction writer, Dan Brown, and Jeff Kinney, the author of the ‘Diary Of A Wimpy Kid’ series. In an announcement, the publishing house celebrated her as “an icon for today’s young Indians,” “who identify with her drive, passion, intelligence and charisma.” In calling her a “global Indian,” the announcement recognised her for being “a woman who has broken the glass ceiling to reach the highest echelons of international stardom.” In the days that followed the fourteenth of December announcement, the publishing giants, faced a lot of criticism for inviting the two-time People’s Choice Awards winner.

Several twitter users and members of the literary and publishing cognoscenti expressed their discontent, including the twitter page for Zubaan, an independent feminist publishing house, based out of New Delhi, and Krishna Shastri Devulapalli, a regular contributor to Scroll.in, a popular independent website. This criticism was founded on the seeming disconnect between the worlds that Penguin and Priyanka Chopra inhabit. Devulapalli, while referring to the achievements of the Quantico star, without discrediting them, elaborates, rather eloquently, “My question is: what has any of it got to do with books, literature and the annual talk put out by an iconic publishing house?” While the decision to invite a female speaker was congratulated, it was seen as disappointing for the firm to depend upon the usual sensationalism and personality cults that surround popular Bollywood stars, to gather attention and a crowd. Simultaneously, several Facebook users also spoke out about the responsibilities that arise with the expansive market proportion that Penguin Random House has come to dominate in India. Devulapalli further talks about how this particular decision, positions Bollywood as the last bastion of hope, of art and of literature, and questions the symbology that the decision carries with itself. Especially in a country where the number of books, in print, and otherwise, being read and written is slowly dwindling, because of the imposition of electronic multimedia, the disproportioned literacy rates, and so on. And more shockingly so, when contrasted with the number of movies being watched, and made.

For a period spanning three decades, Penguin India has continued to form and publish the literature that is read across the country. The firm merged with Bertelsmann’s Random House, in 2013, and has maintained its position as a publishing house that ‘know[s] the market’ and ‘understands new forms,’ and has also ventured into the digital sphere of e-publishing, the illustrative ideals of graphic novels, and regional literature. In several ways, the publishing house shapes popular culture, and is also responsible for the import of foreign pop culture, as the exclusive distributing partner of several leading international houses. Having laid the groundwork of the influence and the extravagance that the firm commands in the literary sphere, the questions that arise in relation to Priyanka Chopra’s invitations include issues regarding compromising the limited spaces the written word is allowed to exist in, for the glamour of Bollywood that seems to have enchanted the entire public. If female authors such as Kiran Desai, Jhumpa Lahiri, many of whom have worked with Penguin before, aren’t prioritised by publishing houses, how can the several many women who dream of professional success in writing, but are stalled by the usual barriers of patriarchy, be empowered to seek? The validity and the fairness of these questions becomes more pronounced, on noting the obvious preference being given to Bollywood, in furthering the commercial interests of the publishing houses. And in the midst of such questions, the lecture at Siri Fort Auditorium, New Delhi, was concluded.

While it is possible to argue that in India, today, the very notions of ‘exclusive’ literature and ‘popular’ Bollywood, the dialectical ‘critical’ and ‘commercial’ compartmentalisation is being challenged, based on the number of film-celebrities turned author in the past few years, including Karan Johar, and more recently Soha Ali Khan. That Penguin in allowing an ‘outsider’ in, is facilitating a change for the positive. But, because of the silence from the organisers, the questions still stand. On the brighter side, the event in itself went by in discussion of Priyanka Chopra’s views as a feminist, and a global indian, as the Penguin Random House twitter feed was updated, live, with statements that proclaimed her enthusiasm, for breaking glass ceilings, and for, a world “where women thrive,” instead of just plainly “survive.” 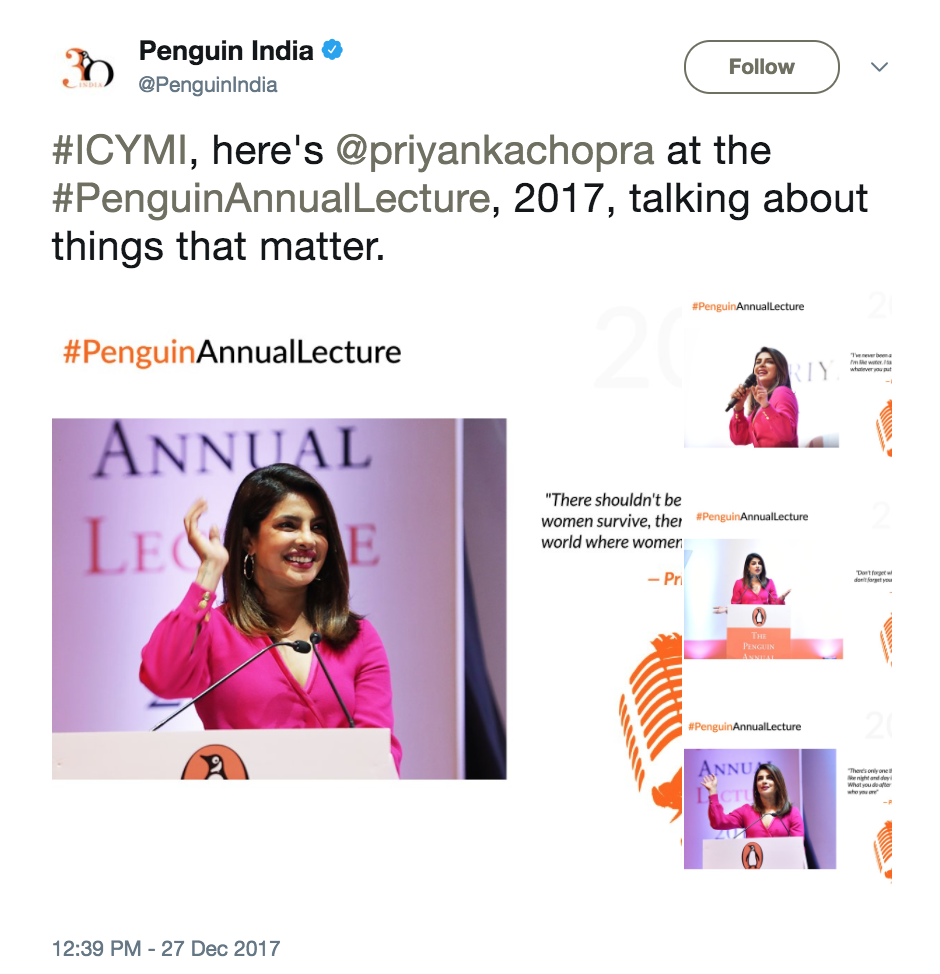