NEW DELHI: Sometime between December 26 and the 27 some Facebook users noted that while making an account, the website seemed to ask for the Aadhaar names of the individuals. Rumors that Facebook had fallen to Aadhaar, the next martyr in a long list of private services that had come to be linked with the unique identification system of the Government of India, started flying all over the internet. This might qualify as hyperbole, but the writer is positive he saw an Orwellian ghost hanging around in random nooks and corners of the country, smiling, as if modern India was churning into Oceania, and dissent would soon come to die into a constant state of surveillance. The company later clarified its position in a blog post made on the 27th of December. The blog post stated that it was just test which “merely includes additional language on the account sign-up page to explain that using their Aadhaar name will help family and friends recognize them.” The company also stated that the goal of the test was to get the users to “understand how to sign up to Facebook with their real name and connect with their friends and family.” 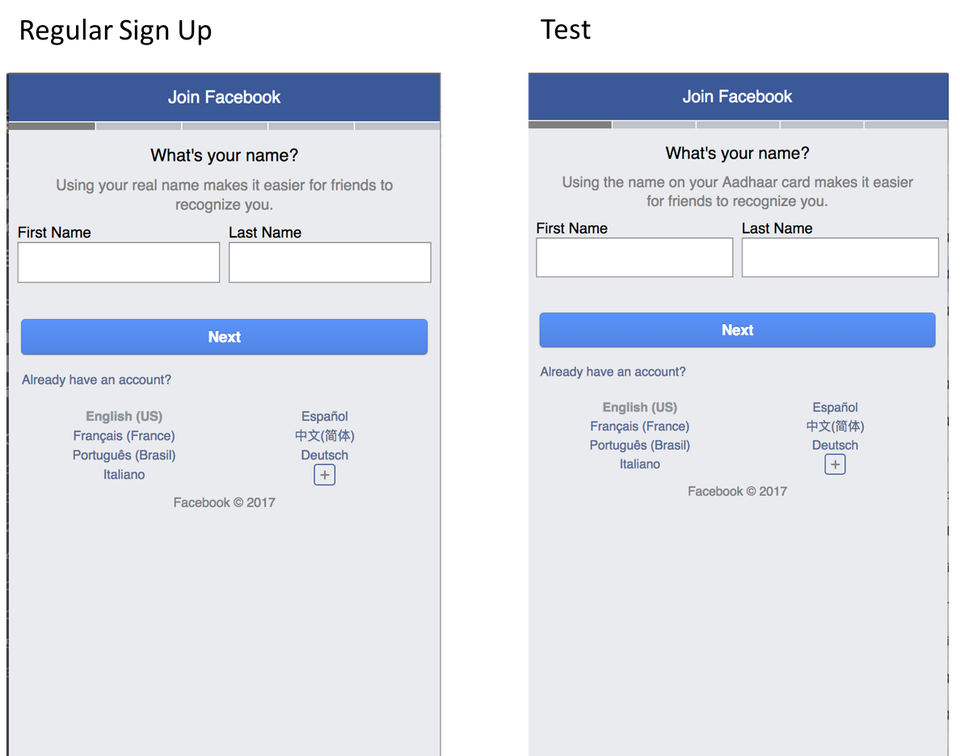 The absolute horrors that this association makes possible need a dystopian analysis. Facebook, embodying the democratic principles of the Internet, has come to be a space for curious exploration and determined exposition. Users on Facebook, under the garb of anonymity, often let their critiques of the state be freely worded. Through selective and universal communication, Facebook allows its users to escape the bounds of their tangible surroundings and interact with opinions from all over the World, and simultaneously, explore facets of one’s self which might be considered inappropriate otherwise. Facebook allows Humans of Hindutva, a meme-based satire page, several thousand homosexual groups, groups for solidarity, and troll pages to coexist. With the Aadhaar data being seeded into Facebook, it would only be a matter of minutes before the state could get a hold of all dissenters, or employ expansive and targeted schemes towards minorities that represent an uncomfortable opinion. Facebook, with Aadhaar linked, would serve to be the longest ever, and the most socially sorted, electoral list. The electoral list in states with a burgeoning minority culture often become the Shakespearean invisible dagger, driving the assaulters closer to the victim, hiding in its malcontent the fallen consciousness of the morally right, the democratic, and the image evokes the memory of riots from 1984, and more recently, 2002.

But the modern dystopia is as much politically totalitarian, as data-hungry, if not the other way around. Data has already been declared the new oil. and has also become currency. With entire processes of human life transferred into bits and bytes of data, including communication, trade, consumption and production, sex, and so on, data holds the potential to supply large amounts of knowledge about the human nature, and with the availability of knowledge comes the possibility of manipulation and experimentation. It is data that enables Facebook to become a means of curbing dissent for the State, and allow companies like Google to, ostensibly, better provide their services. Personally Identifiable Information has been defined, in Information Science, as data that can be traced, or can be used to trace, to a particular individual. Personally identifiable data can lead to the creation of user profiles. These user profiles, when used for data analysis, can result in interesting combinations and connections and the process of creating and treating user profiles is termed Profiling.

Profiling has long been discussed as the biggest threat of the Aadhaar project. Jean Drèze, in an opinion piece for The Hindu, gives the example of railway tickets. If the database that is responsible for dispelling tickets is seeded with the database of Aadhaar, which is essentially what happens when the Aadhaar number in entered for ticket-booking, the State will have the access to all railway tickets you have booked through your Aadhaar for all of your life. Whether or not this qualifies as a violation to my right to privacy is still up for debate, only when the same profiling is allowed to private enterprises, everything I talk about on Whatsapp, comes up as a suggestion on my Facebook. Which to the optimist eye can seem a vision of tailored services, but instead is very problematic especially when we take into account the prevalence of reductive and exclusionary political philosophies. A person searching for articles on Nazism is more likely to be serenaded by links that might be of his/her interest, i.e. Nazism, instead of otherwise, because of the data profiling possible. Just as the State can use the data profiles so created to dispower reactionary forces, private players motivated by profit can use them to further targeted consumption through advertising. More problematically, with the rise of the technocrat, do both, simultaneously.

As December the 31st haunts us with its year-ending jubilant charm, there stands enough reason for us to spend some time recapping the Aadhaar issue, and reminding the public that an infringement upon our right to privacy is a matter that the current government cannot slyly push under the carpet of administrative and bureaucratic delay, which seems to be the case with the five-panel bench that was due to start addressing the several petitions against the Aadhaar since 2014. While the Center has moved its deadline of linking Aadhaar with various services, making Aadhaar mandatory for several, including those such as PAN Cards, and LPG Subsidy and so on, to March the 31st, the February 6 deadline for the linking of Aadhaar details with one’s sim cards still stands. Deadlines and guidelines aside, the constant messages about linking Aadhaar with one service or another have become common place for most urban Indians today. Users of Ola Money, PayTM and other forms of e-wallets are constantly reminded of the benefits that come out of the absolutely tedious Know-Your-Customer routine, and on several instances services which were previously available to users that haven’t completed the holy linkage, such as the service of transferring money from one e-wallet to another, or to a bank account, have been discontinued.

The Government isn't necessarily pushing the Aadhaar, at least as far as the Supreme Court is concerned, but private corporations have come to employ passive coercion, and negative imposition. The trial by Facebook is undoubtedly representative of a very subtle brand of passive coercion, when contrasted to the more importunate reminder/warning messages. Through negative imposition, a user, possibly of an ewallet, realises his inability to access certain services he sought in downloading that application without the linkage of Aadhaar. The user might choose to either go through with it, or delete the application altogether, but in either case, the image of the consumer isn’t that which the market sells as its greatest accomplishment and virtue. The coerced consumer by virtue of his irrationality can never be pushed as the poster child for right-economics.

All in all, while the Courts are still debating on whether or not, and in what manner, the intricacies of the Aadhaar Act 2016 infringe upon the individual’s Right to Privacy, and furthermore, what exactly does this right entail and come to symbolise in the onwards trajectory of the Indian State, several private companies continue to benefit from this service. The Government, at least if we were to perceive anything from the Act in itself, is facilitating this provision of sensitive data, by making it available to all ‘requesting entities’ for ‘authentication’ purposes, save the core biometrics.

The image of a failed consumer, in days of crony capitalism, is very often the harbinger of a much darker image, the image of a defeated citizen. It is possible to argue that by allowing this coercion, at the cost of comfort, and which is obviously ‘unethical’ to the even slightly lawful eye, to continue, the Government is only normalising the Aadhaar, to an extent where the very privacy that is being fought for becomes redundant under its ubiquitousness, confusedly being discussed behind closed doors of delayed courts.