The Aesthetic Of A Yuva Hunkar Rally

There were many faces that haunted the rally with their visual and emotional presence.

Parliament Street is a five-seven minutes’ walk away from the Patel Chowk Metro Station. There isn’t anything of note, nothing that stands out against the multitude of Central Delhi, about the walk. It stays just-another one of those that hundreds of men and women participate in; a walk amongst the company of one another, perfectly alone, heads bent, earphones in, and minds stuck onto typed alphabets on digital screens 一 endlessly towards the comfort of just-another air-conditioned office.

There are of course those little havens of old-school camaraderie, the paan-walas, where conversations are had over a borrowed lighter, or a shared smoke, but nothing that would raise interest, and hit the eye with distinction, on a Wednesday afternoon. The ninth of January 2018 was not an ordinary Wednesday. Even the most unobservant walker would have felt something in disarray, for the usual granite was shaking with thuds of uniformed policemen, moving around, cordoning off a select portion of road in front of the Police Station. 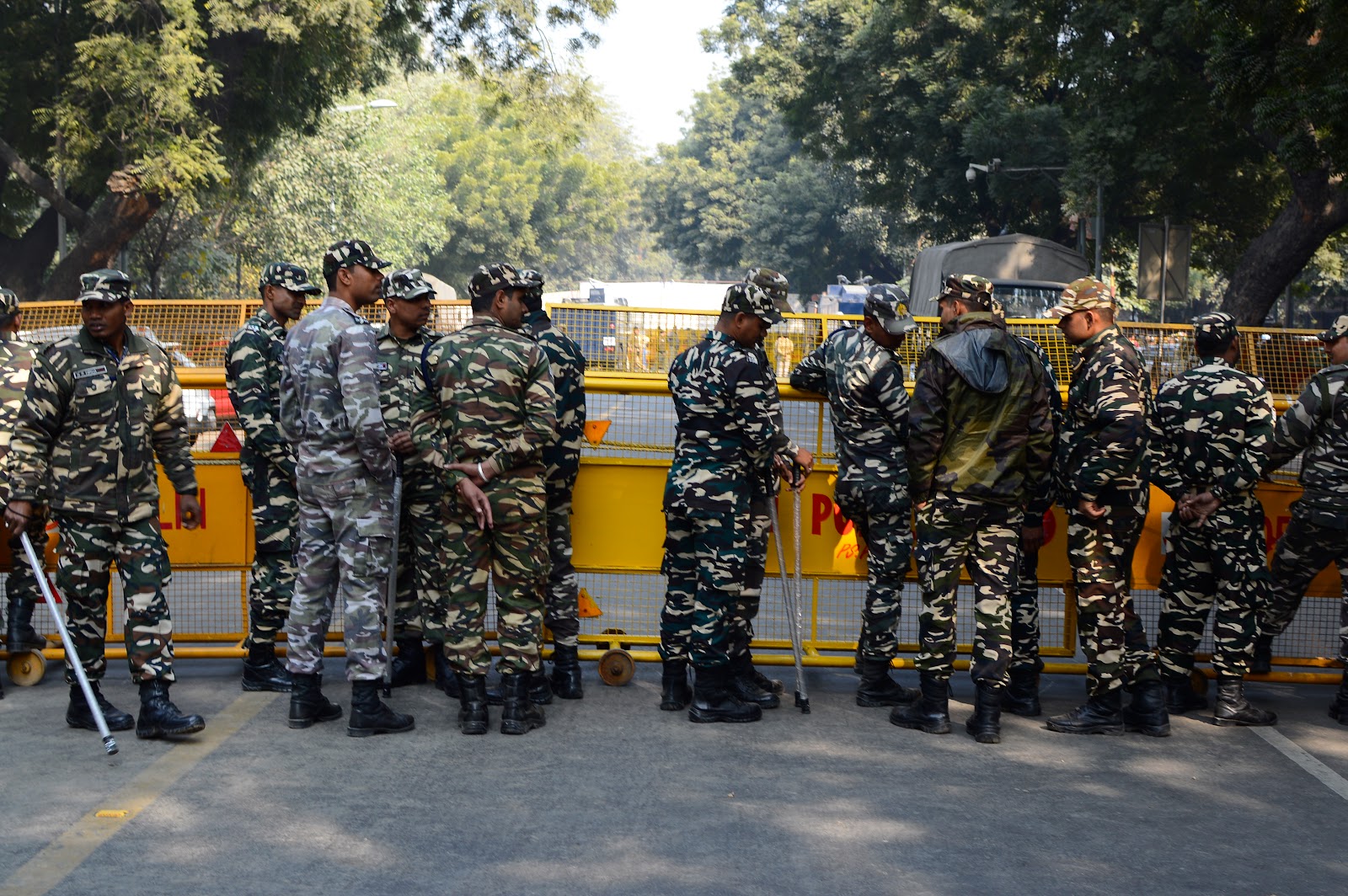 A stage had been set, and the Sun was languidly sieving through the diaphanous pink and white tent, the walls of which swayed in winter morning breeze. As this writer looked for people to interview, and the Photographer sought portraits, the Police awaited action with metal shields, lying around, reposing, against metal barriers. If they could talk, they would have been, invariably, very disappointed. For if, Twitter was to be believed, this had to be the largest gathering of ‘anti-national’ thugs, in the Country, or, alternatively, cancelled because of a denied permission. Neither was the case. There were people there, media personnel, and others, those that sought political fervour, and/or identity comfort, a renewed hope. The seats were empty, but the crowds were gathered around the corners, deeply indulged in conversation with one-another, or a solitary, deep, self-reflection. 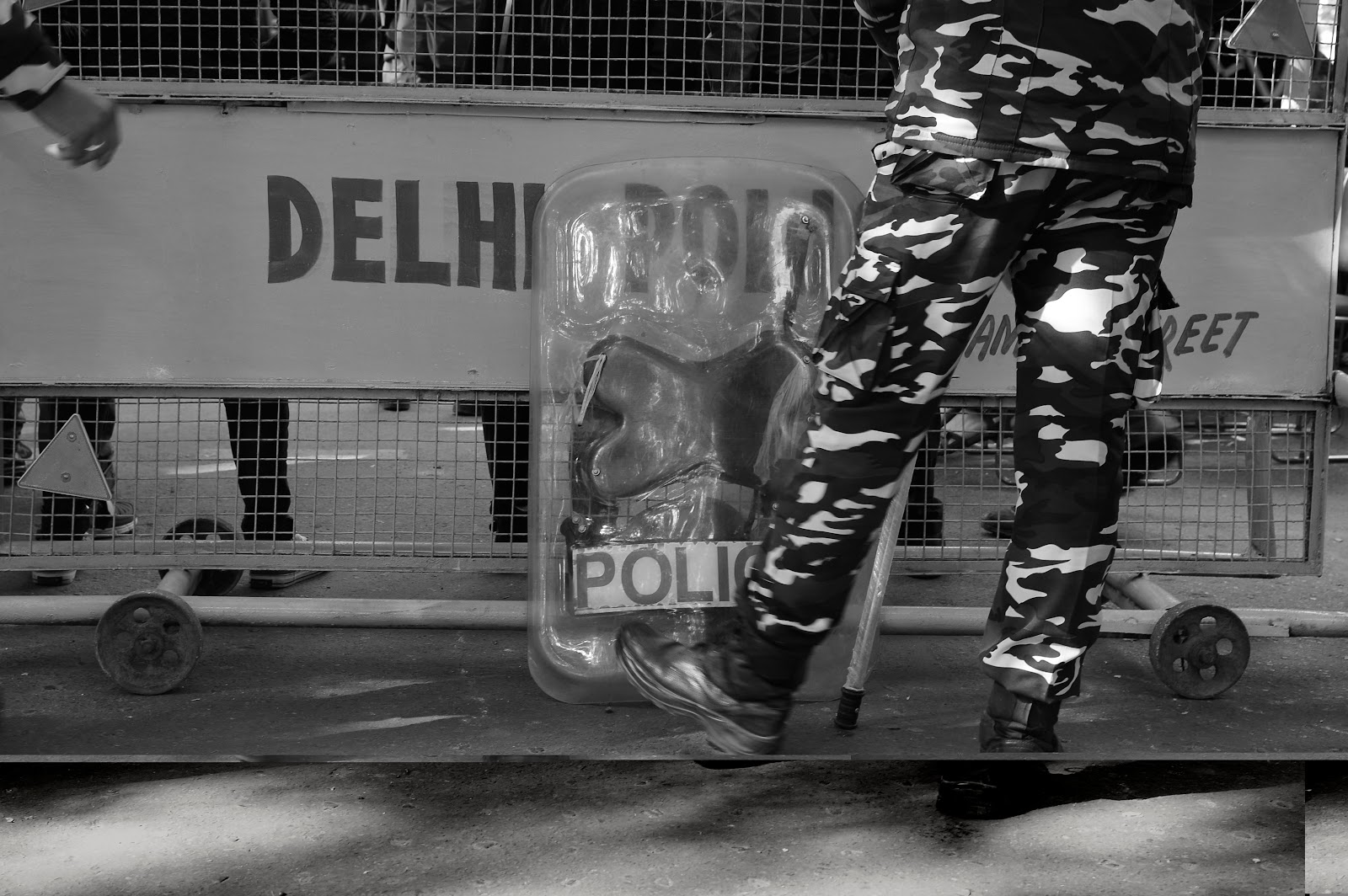 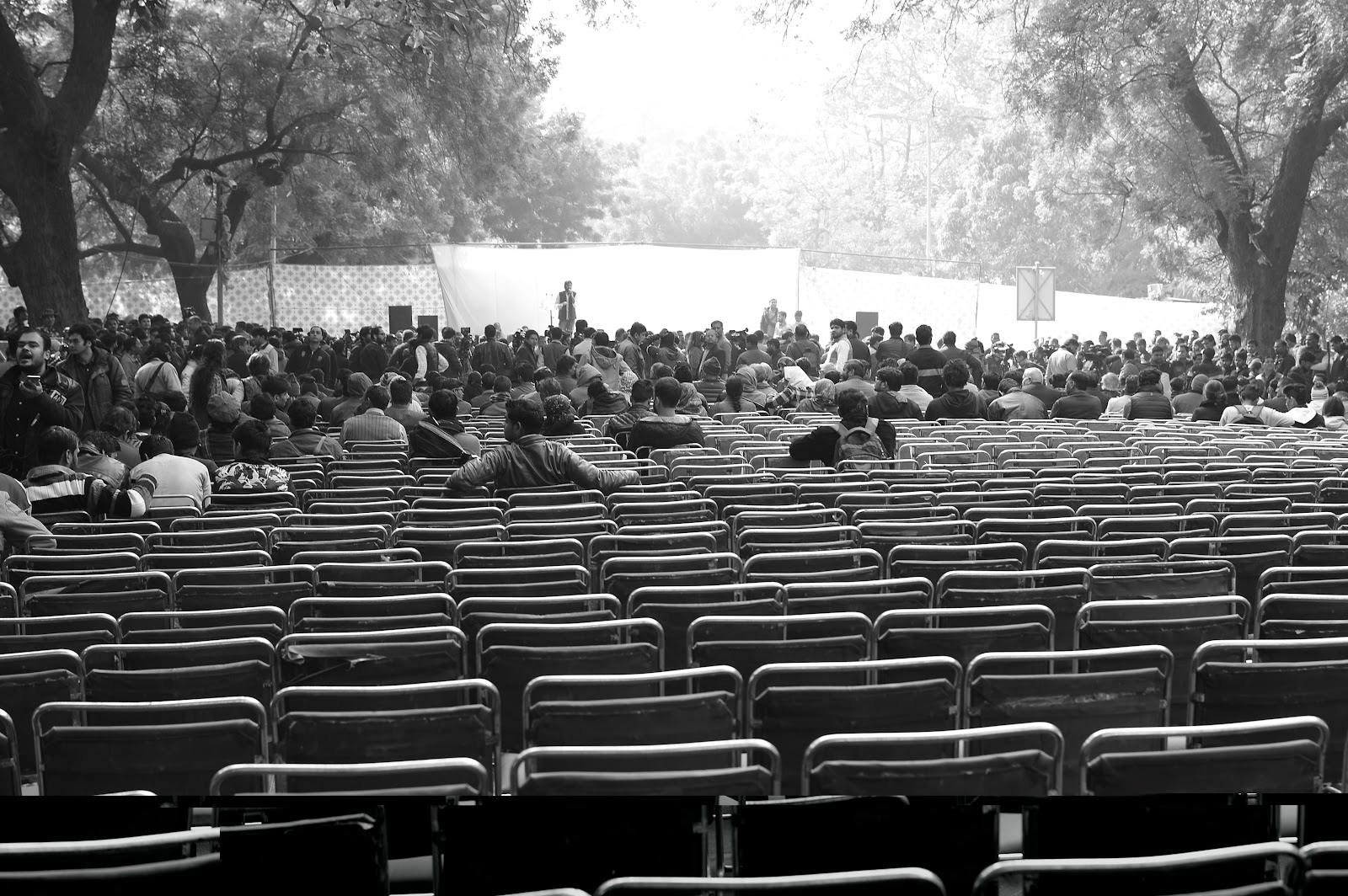 Everyone had something to think of, and no mind remained elusive of awareness. Propaganda wants and envisions a herd-like audience, and often the delusion gets normalised through em -bedded media houses. But it wasn’t so on Parliament Street, yester -day.

The murmured conversation was alive, and somewhere around, a man was busy gesticulating in active dissatisfaction, and narrating the vices of the current State. 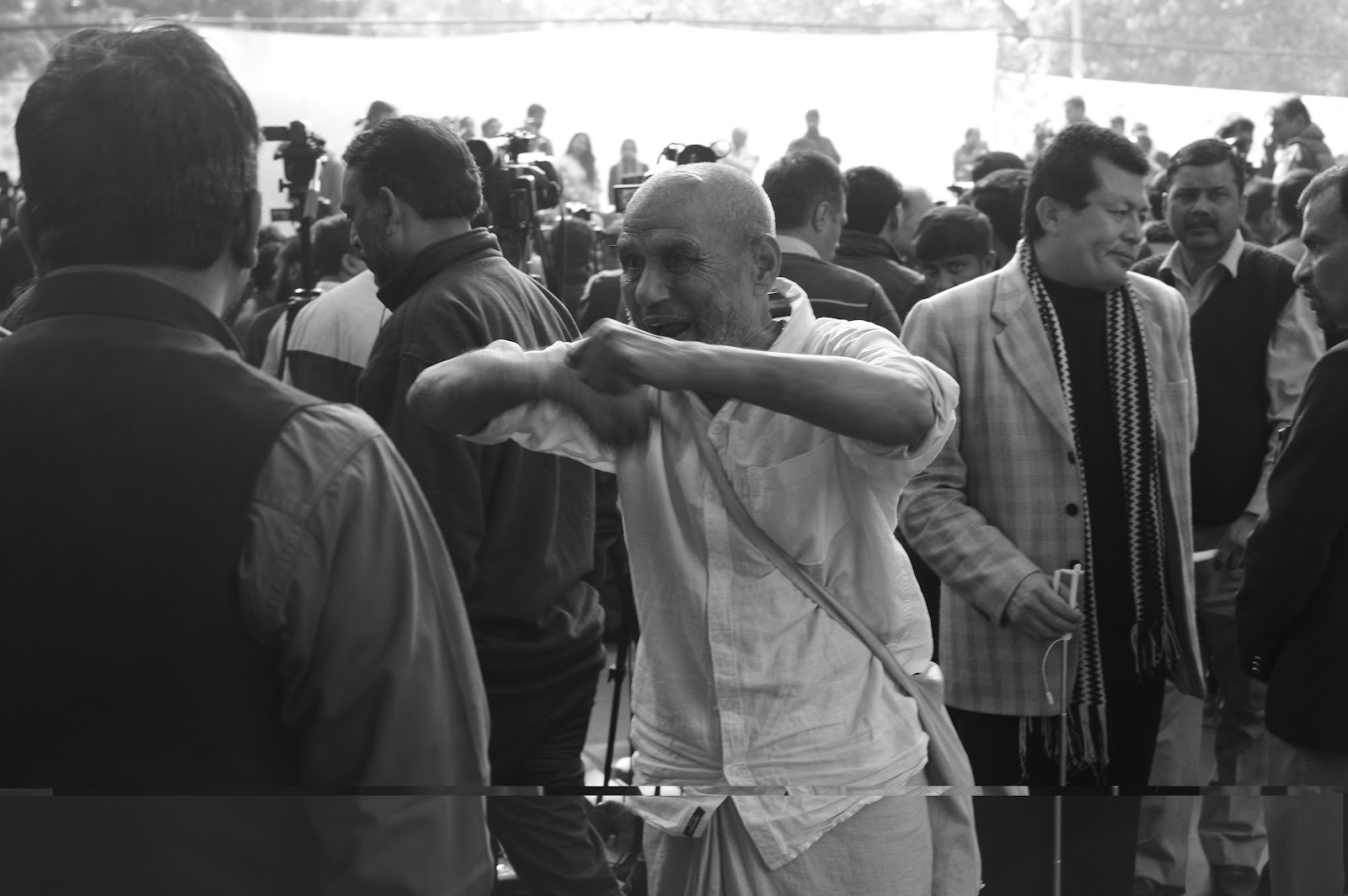 A much calmer, and better dressed gentleman sought to calm his animation, and in the midst of it all, arose an acoustic melody with accompanying lyrics that spoke about the sanctity of the Constitution. The lead-singer of this makeshift choir was playing a guitar which brazenly read ‘No God,’ and had a sticker which invoked Ambedkar’s Buddhism. 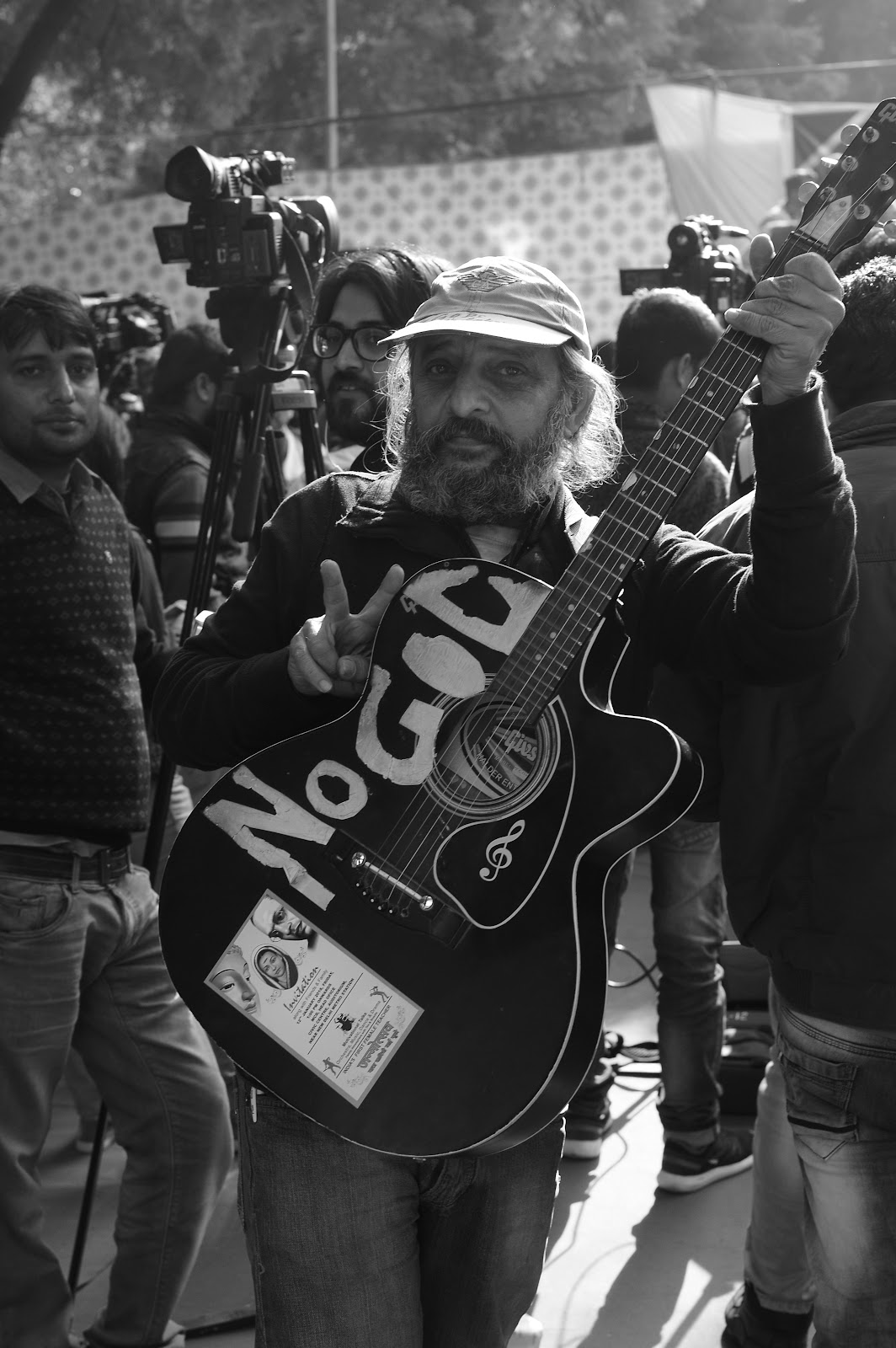 In this writer’s most honest reflection, it had to be for some larger principle of Natural justice, and Democracy’s capacity to ensure fairness, that the guitar which sang of loving and respecting the Constitution, and that the Constitution is what makes us truly Indians, and it is that which is our rightful mother, had Baba Saheb on it.

Somewhere in the distance, a man was selling books by Sartre, and Spencer, in Hindi, and English. It wasn’t until much later that the pearl-white columns of the colonial ruin that lines Parliament Street reflected escaped whispers, those of despair, pain, and expression, which have come to inhabit the hollow lives of several marginal communities of India ー worsened under the current Government. 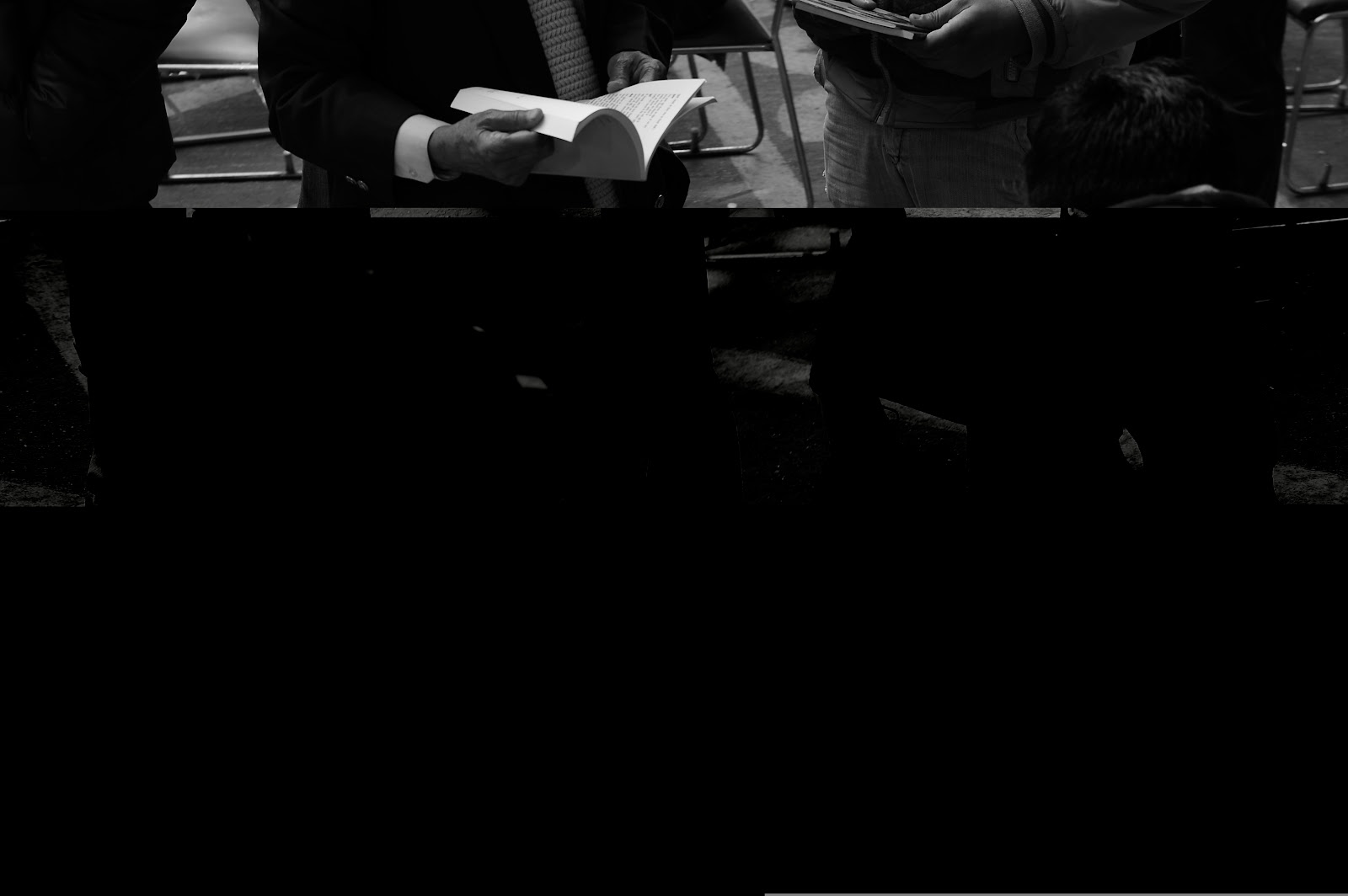 As more and more speakers arrived, the Media swarmed around them like moths to a flame. Several followers of the invited speakers ran to their rightful representatives with a grace largely forgotten in modern-day India. There were no followers that were bought at the price of fear, or material. Shading themselves under the glaring Sun, they sought comfort in the empowering words of their future leaders, a capable opposition, and for the fear of an alliteration, a looked-forward-to opportunity. The crowd was then a metaphor for larger unities under unfair regimes. The panel of speakers, in their words, unfolded a tapestry of fears of state tyranny, into a call for change and rights, a hunkar onto the crowds. This writer envisioned a large and vivid energy to be encapsulating the small crowd into a whole. 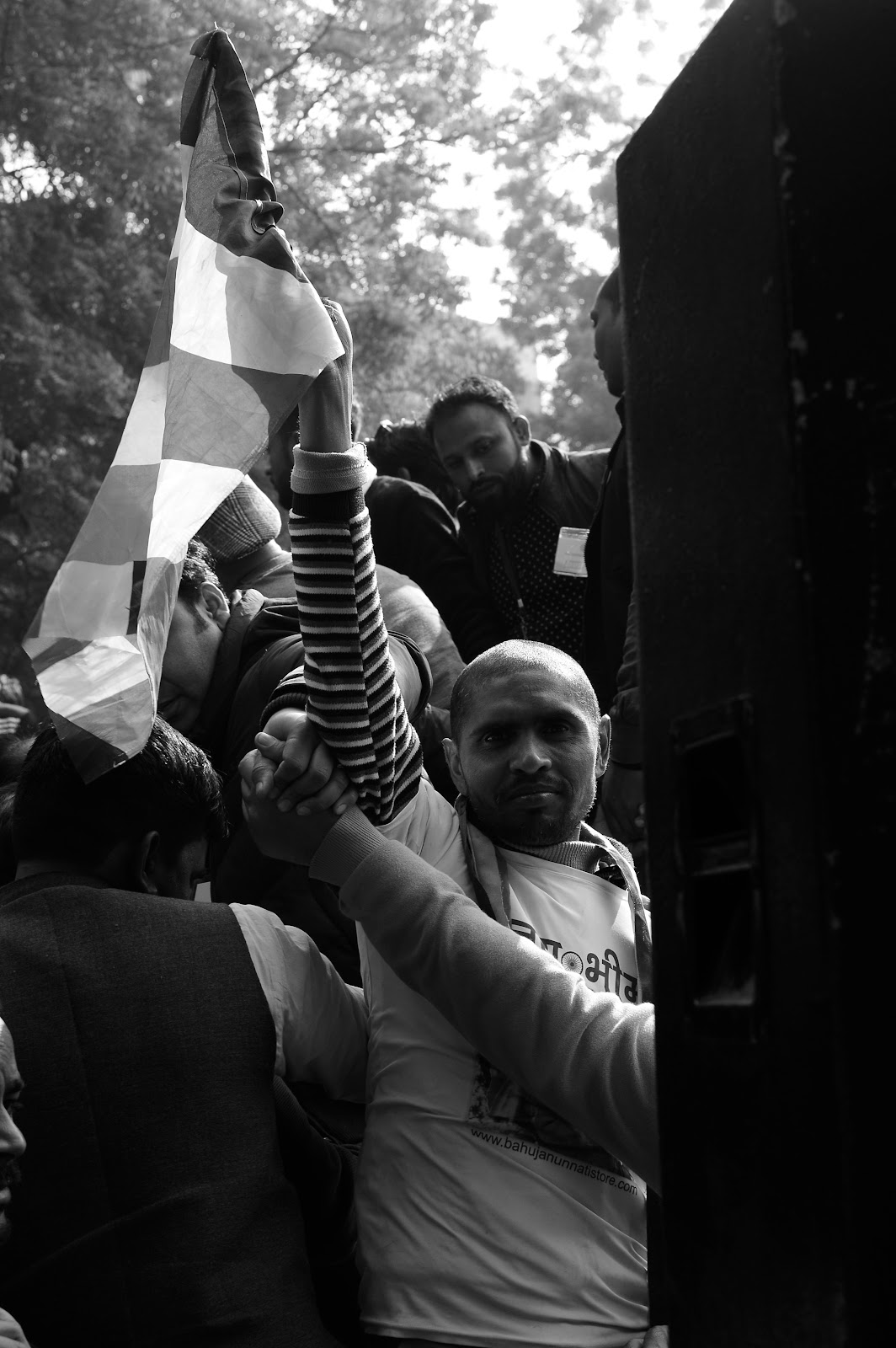 Student leaders from Lucknow University, Banaras Hindu University, Jawaharlal Nehru University, and Youth leaders fighting for the rights of the Dalit Community, the LGBTQ Community, were all present on the same stage. It is often remarked that democracies tend to become complacent in their own efficiency, and that because of the freedoms enjoyed under a democratic society, the Politics of the Democracy often goes unchecked, and that remains a real threat to the corruption of the State and its machinery. The panel of Speakers at the Yuva Hunkar Rally was not complacent, and the solidarity that emanated off of the individual speakers’ collaboration provided those in the crowd with a vivacity that has seemed anachronistic against the culture of fear and violence that the current Government is furthering, sometimes overtly, as in the case of Chandrashekhar Azad ‘Ravan,’ and other times, through its silence, as in the case of Najeeb Ahmed and Rohith Vemula and so on, and so on. The same was spoken at length about by Dr Prashant Bhushan. 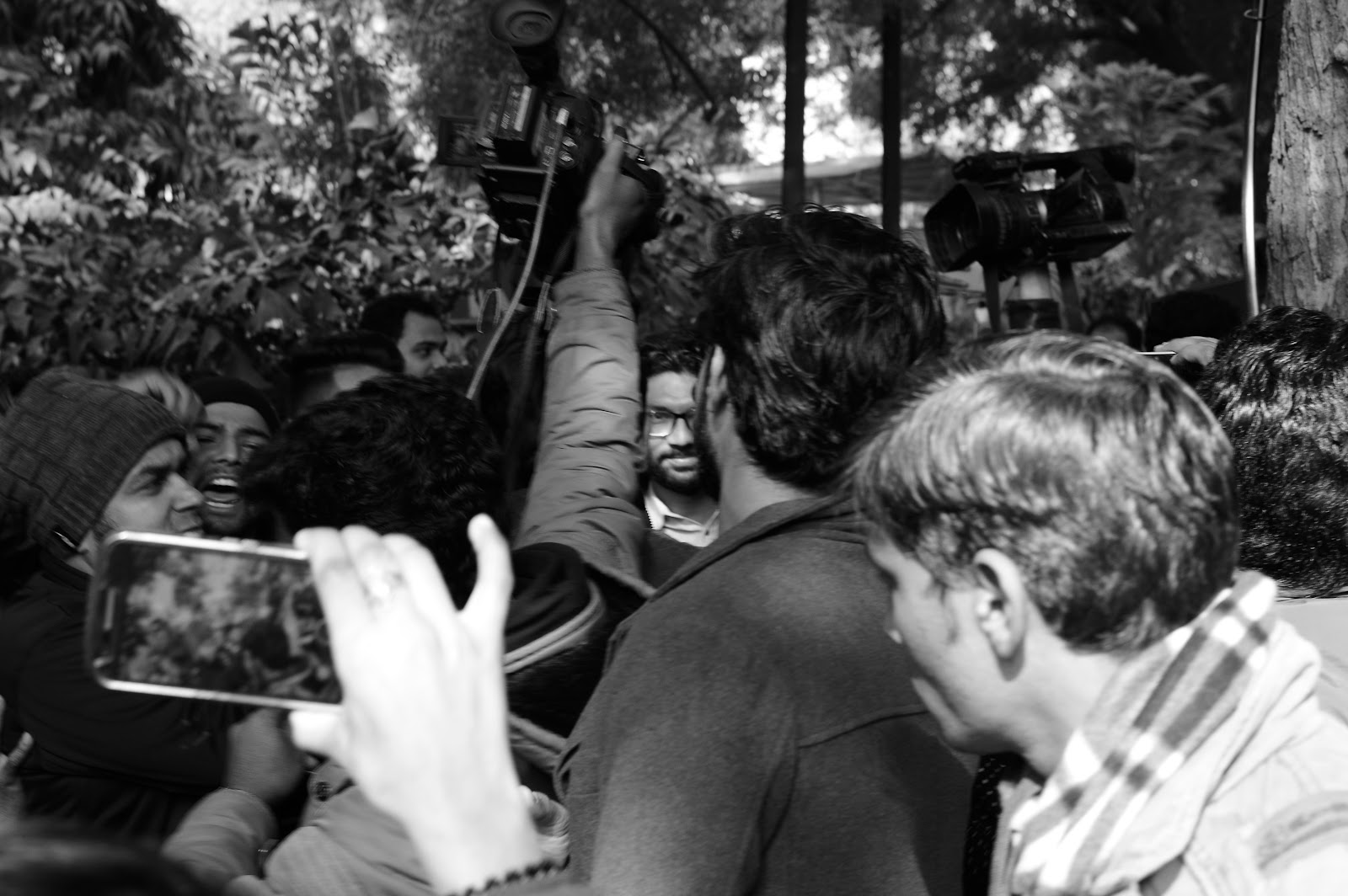 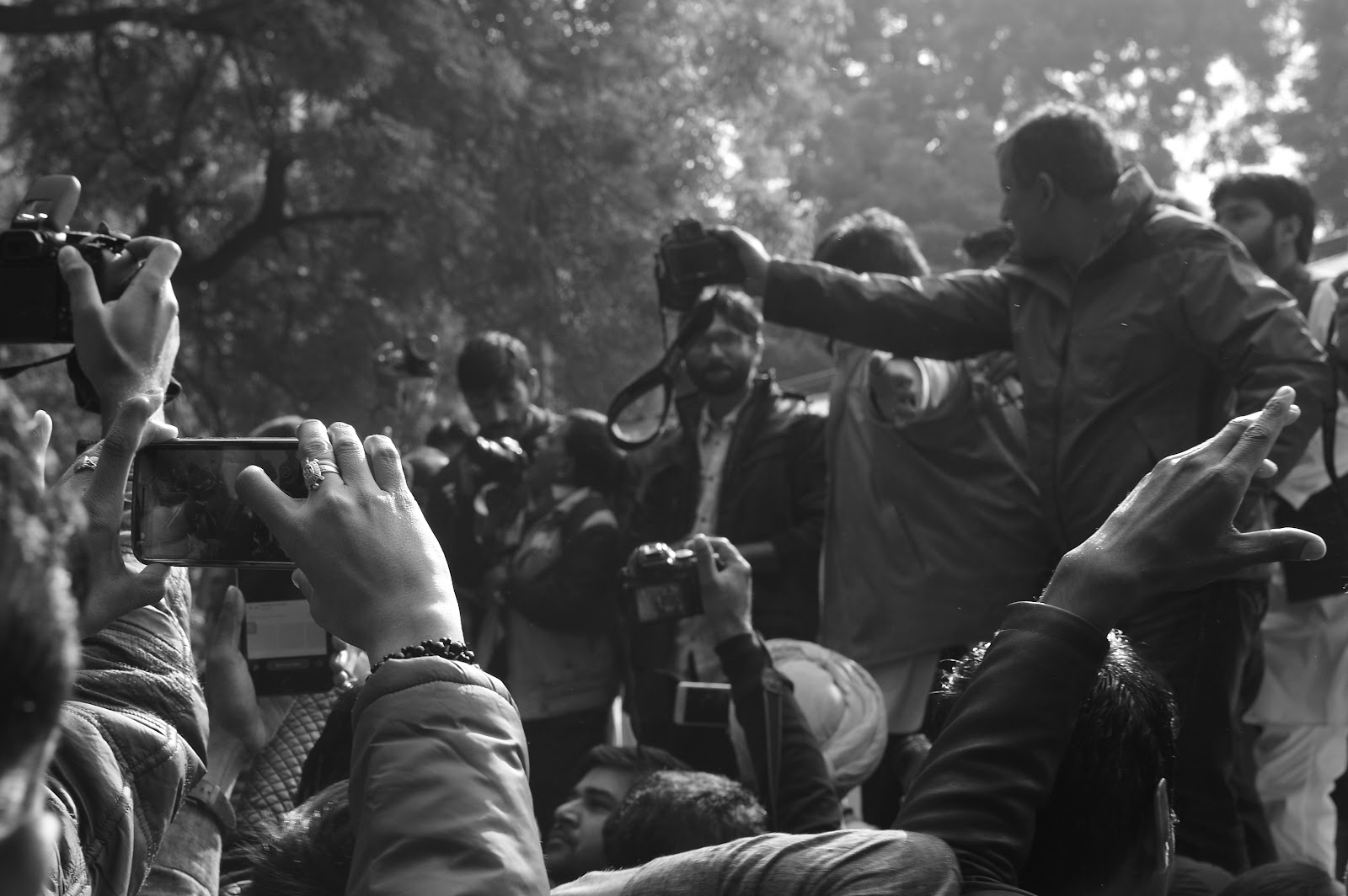 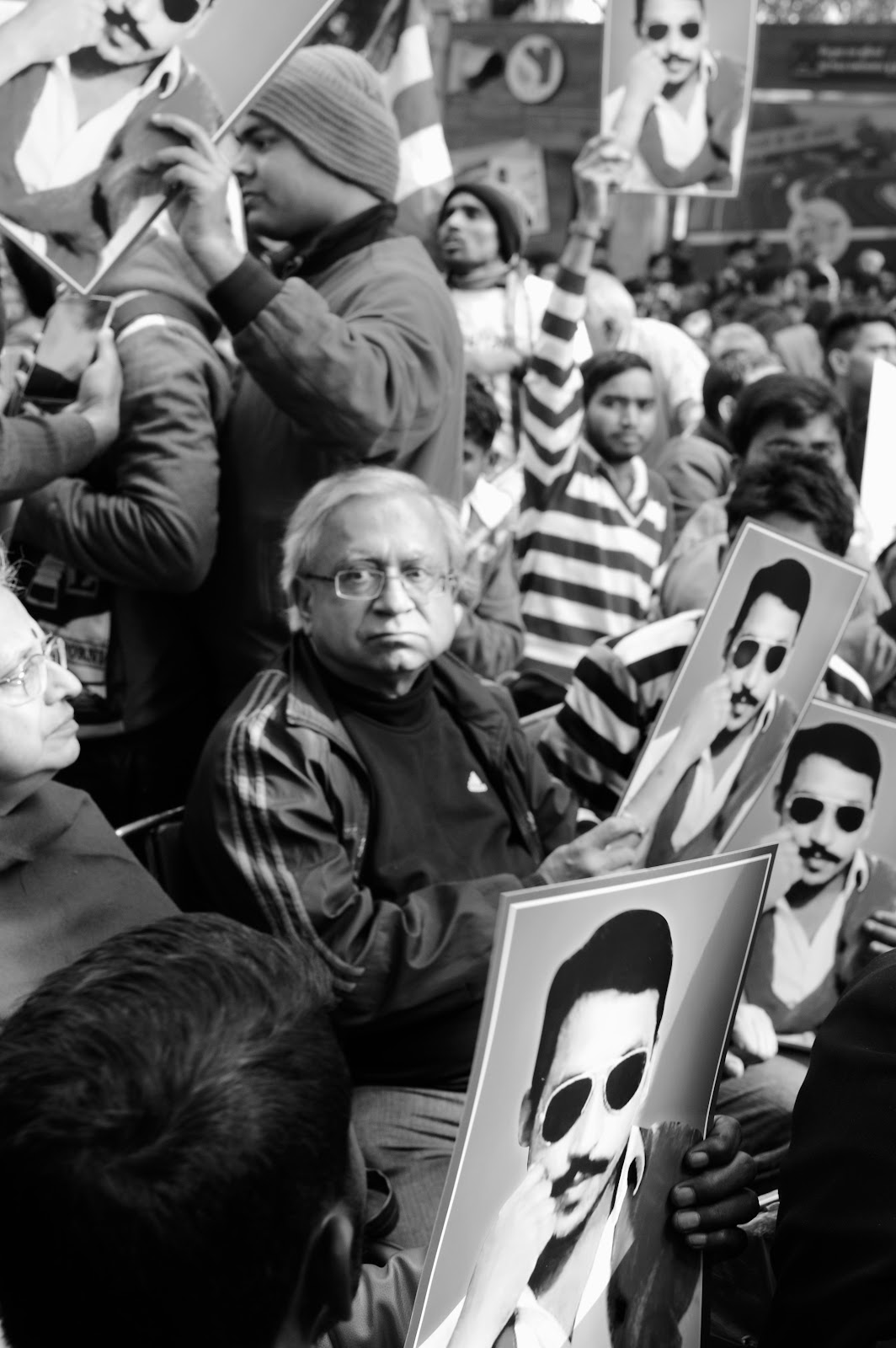 Najeeb Ahmed was reported missing in October 2016. The apparent suspicions involve members of the ABVP and hence, the simultaneous Police inaction has been crucially recorded and chided. In her speech, Najeeb’s sister, Sadaf Musharraf, exclaimed that in the faces of the Youth leaders gathered on the stage, she could always see Najeeb, and continues to, as her fight remains alive. There were many faces that haunted the rally with their visual and emotional presence. A poster of Rohith Vemula hung behind the stage, and several hundred people stood, and sat, and walked about with those of Chandrashekhar Azad ‘Raavan.’ Maybe all of these people sought his face, in the faces that stood upon the stage. Maybe all of these people sought, in his image, an almost perfect representative, a surrogate self, for the lines on their faces have been flattened, under the weight of several centuries of identity imposition and oppression. 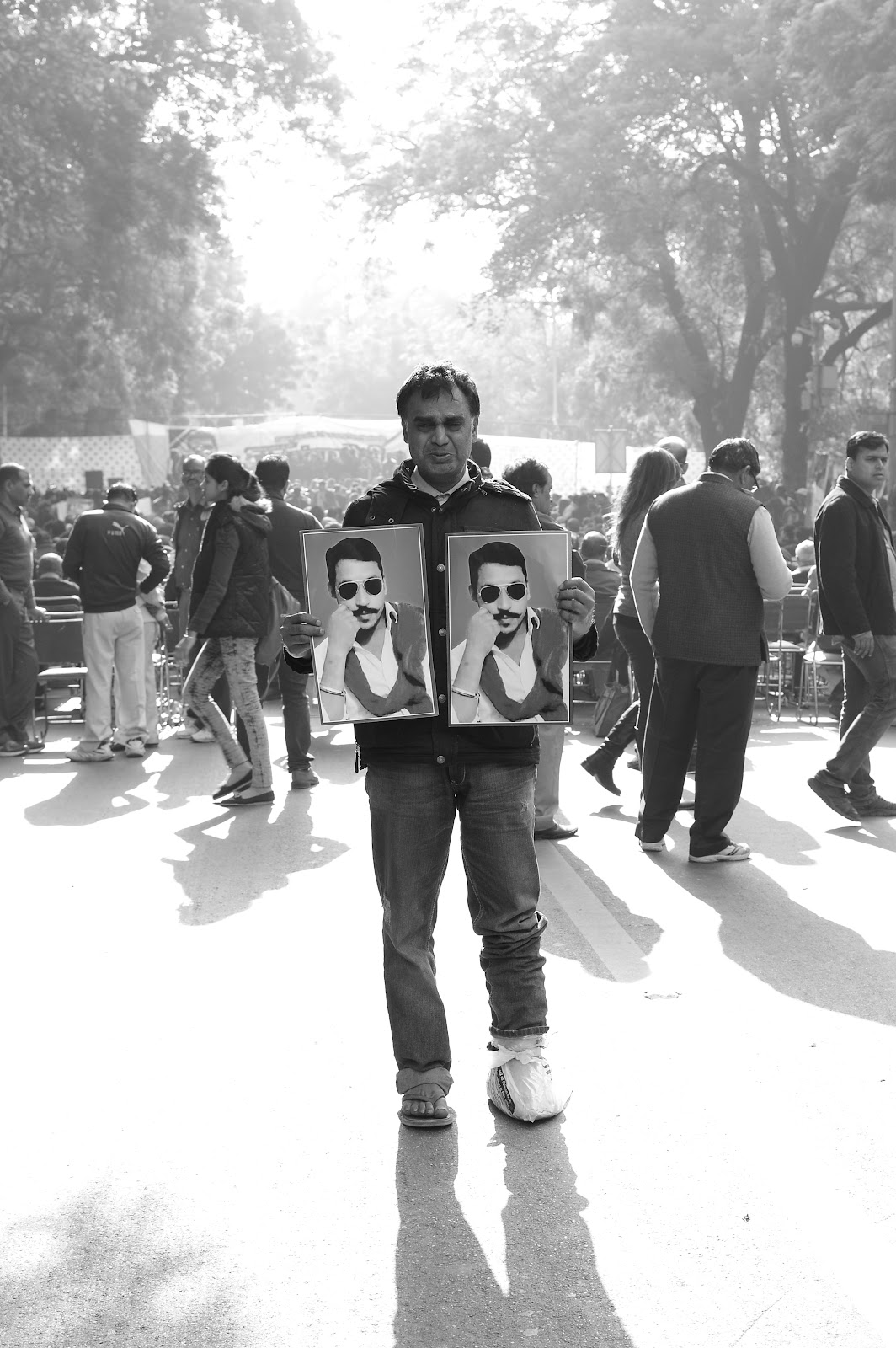 Several maybes clouded this writer's mind, but one thing was undeniable that those faces imbibed breath and humanity into those that carried them along. While the Photographer for this essay was seeking people for portraits, he often ran into individuals who would turn sorrowful, and almost breakdown upon recalling the harrowing tales that came with each and every one of those faces. And as they spoke, the words that for so long had been contained into rooms and private settings, were finally let go of beside gathered compatriots. 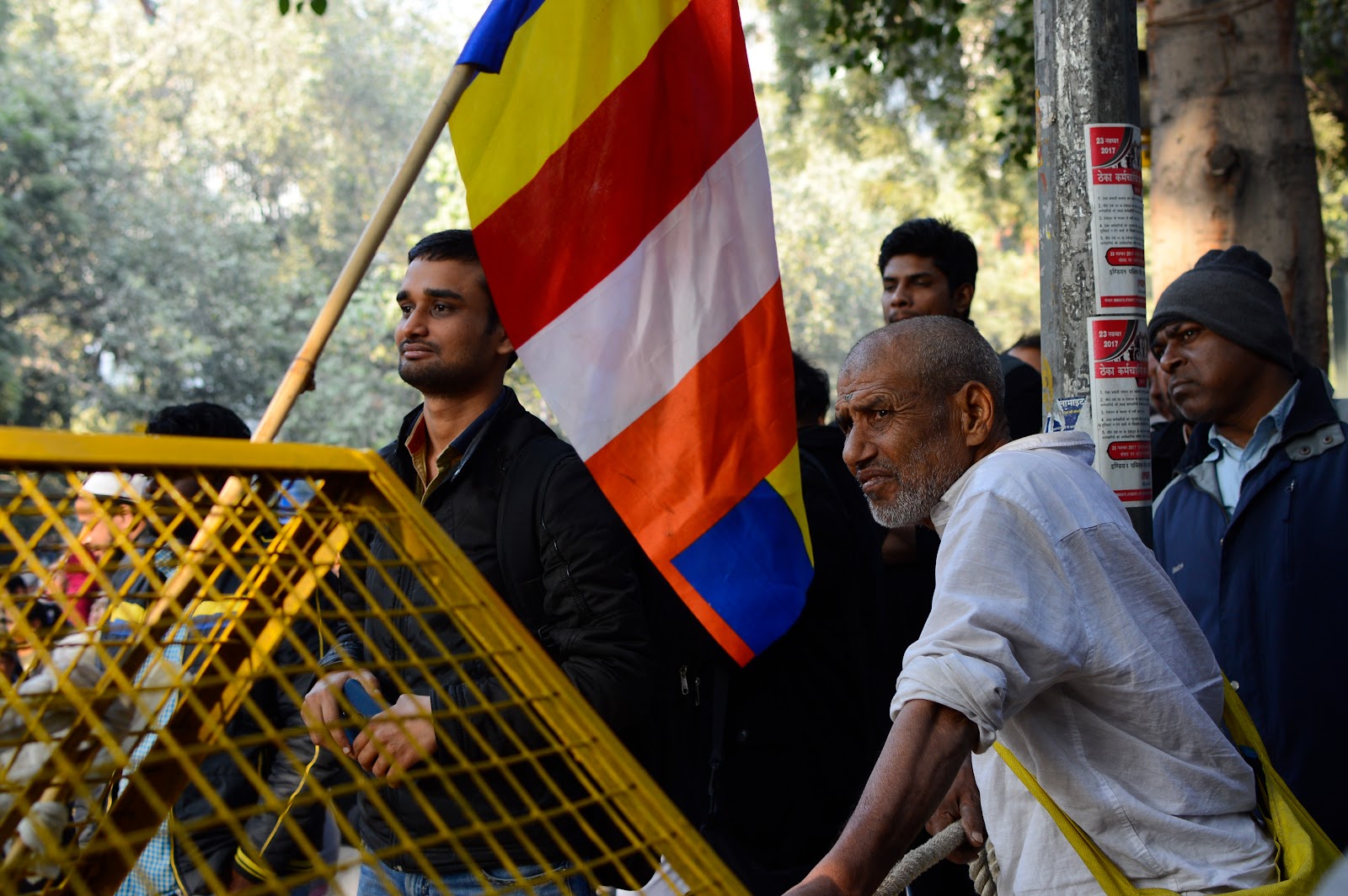 Or maybe, instead, these faces were there, to constantly remind them, and those on the stage, of the necessity of their purpose. The same thought was echoed by girls from Pinjra Tod, and Umar, and Mevani, and almost all other speakers. The thought that this rally wasnt an end in itself, but the first step of a long and arduous journey towards General Elections, 2019. As one of the songs that the No-God guitar played stated,

“For this is just the stretch before the break of morning light, forth lies a long and testing fight.”