In Photos: The Dying Craft Of Gun Making In Kashmir

The rise of militancy has virtually destroyed what was once a thriving indigenous industry.

SRINAGAR: Located near Malkhah, the largest graveyard of Srinagar in Khanyar, Zaroo Gun Factory is one of the only two surviving gun factories in Kashmir. The other one is Subhana & Sons Gun Factory which is located only a few hundred meters away from the first one. Both the factories carry more than half a century old legacy of making 12 bore single and double barrel guns which are mostly used for hunting.

Kashmir was famous for its traditional indigenous guns way before automatic rifles became a common sight in the conflict ridden valley. Misfortune struck the Kashmiri gunsmith industry when Governor Jagmohan imposed an ‘unofficial’ ban on the making of guns in 1989. Although the ban lasted only two years, the license procuring procedure was made extremely stringent, which compelled most of the gunsmiths to look for other avenues of survival.

“Right after the birth of armed struggle, the state got worried that these guns might fall in the hands of militants, which never happened… militants use very different guns,” a police official who wished not to be named said.

“This is a clear case of regional discrimination and Government apathy. The factories in Jammu which used to make 300 guns in a year are now allowed a quota in thousands. While our quota has been restricted to few hundred,” Nazir Ahmad Zaroo, the owner of Zaroo factory said bitterly.

People like Zaroo grew up learning the art of making guns but now they are witnessing its silent death. It is only a matter of time, with most of the opinion that the flickering candle of this legacy may extinguish soon. 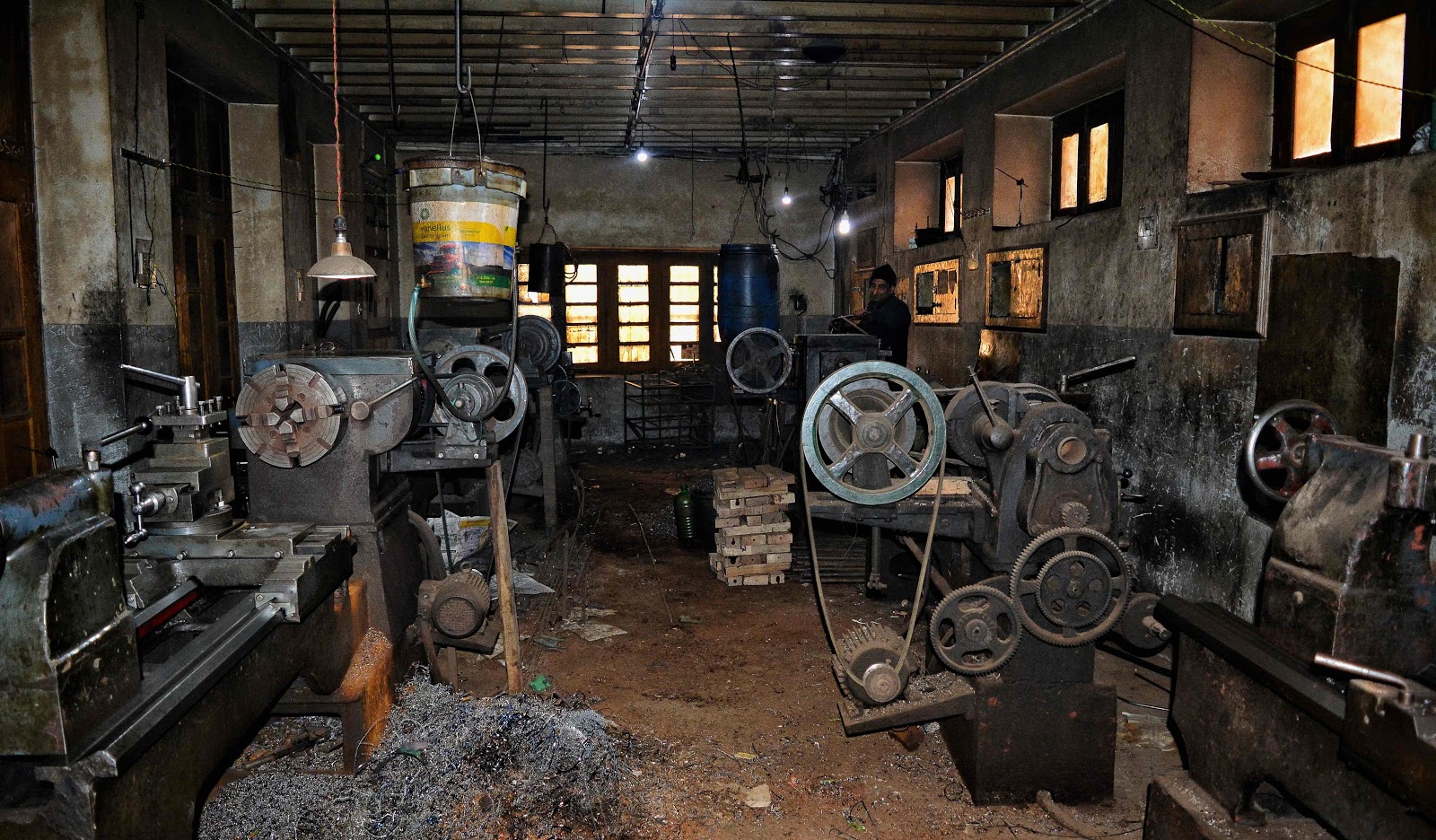 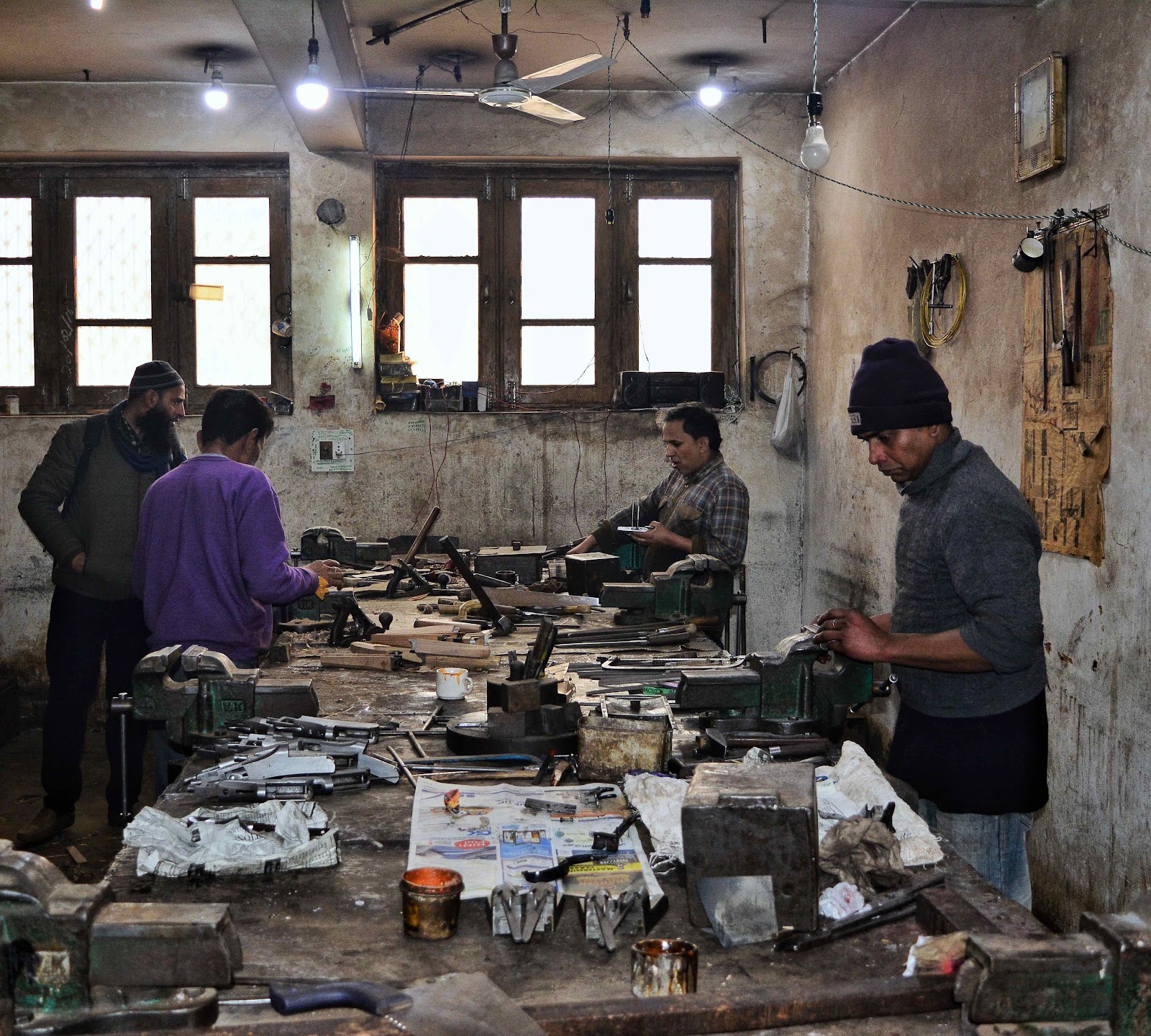 A whole locality in Srinagar was named after gunsmiths once but unfortunately the factories have to hire skilled workers from outside the state now to keep running. 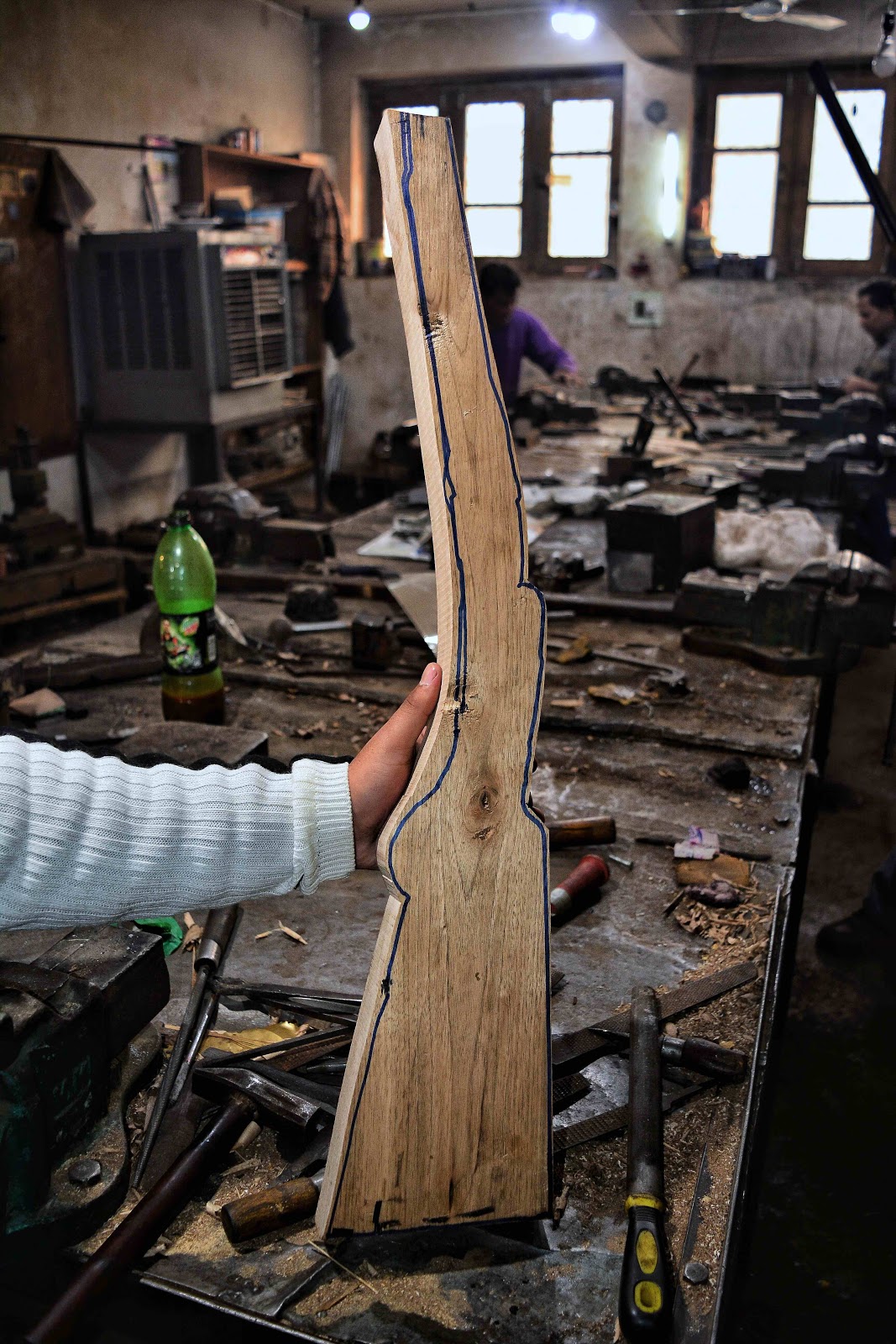 Walnut wood is used in the making of gun butts in Kashmir. Walnut is more durable and suitable for carving floral decorations etc. 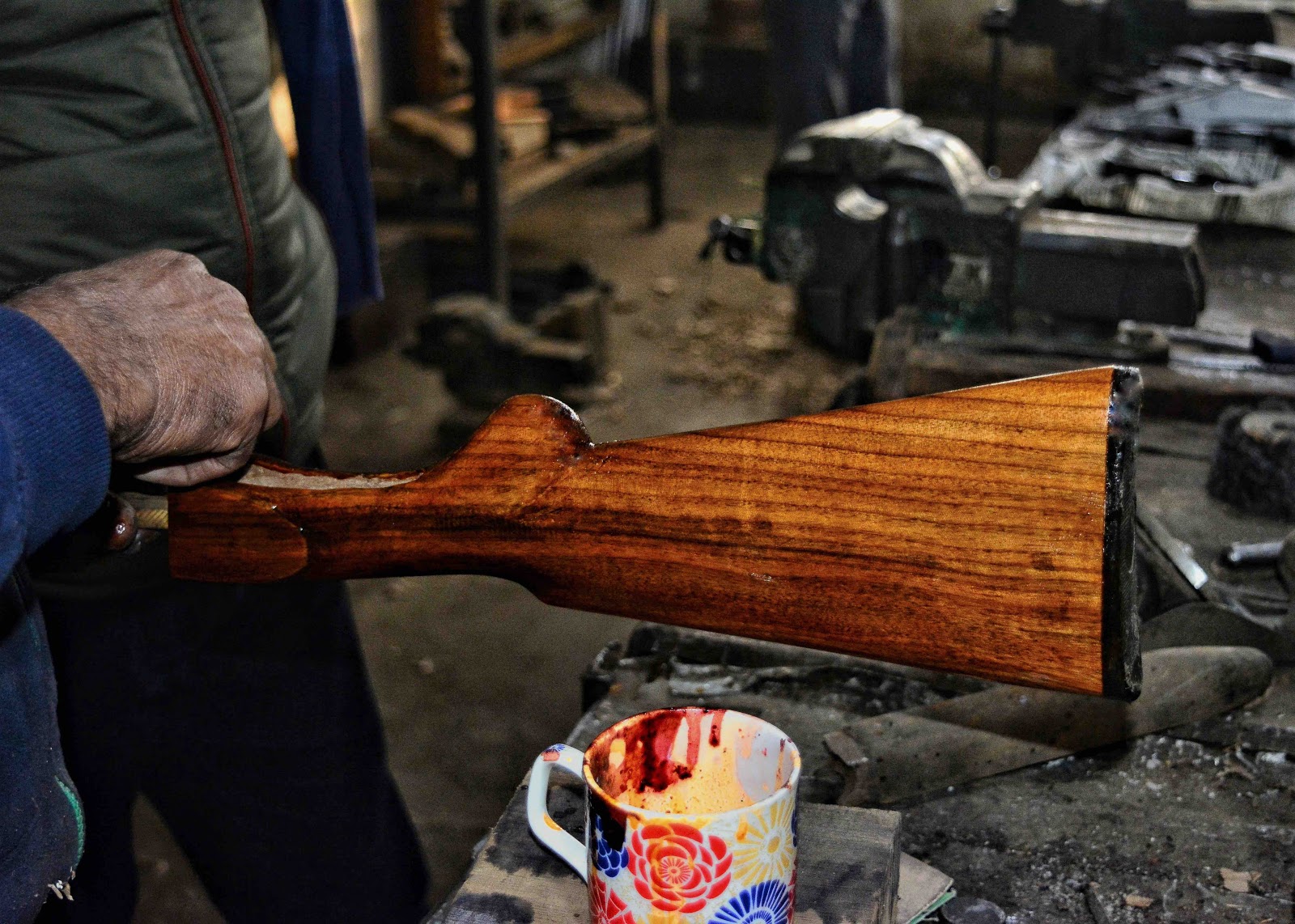 Raw walnut wood is shaped into gun butts and later polished to make it long lasting and attractive. 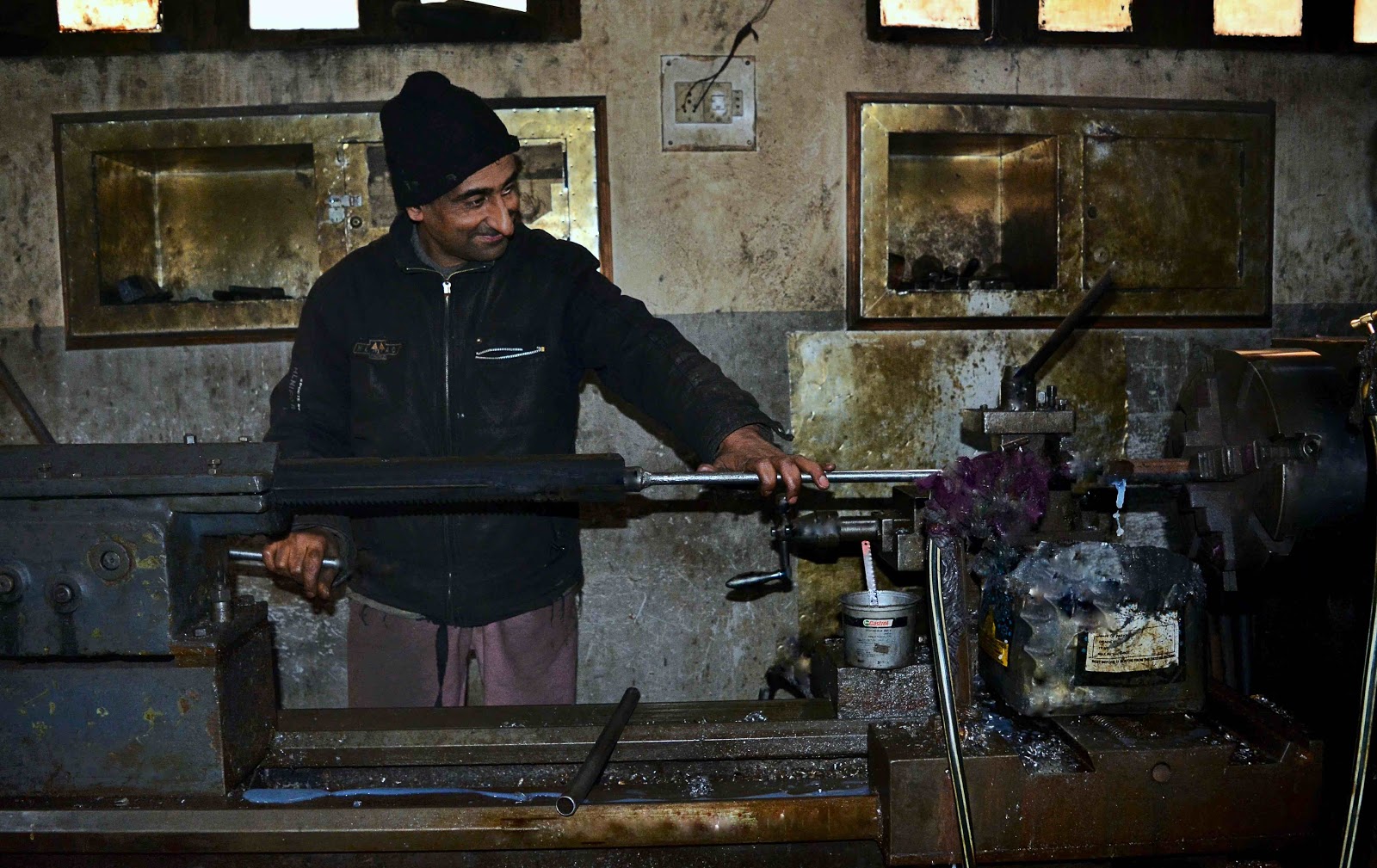 A worker makes gun barrels out of metal pieces on a hand operated machine. 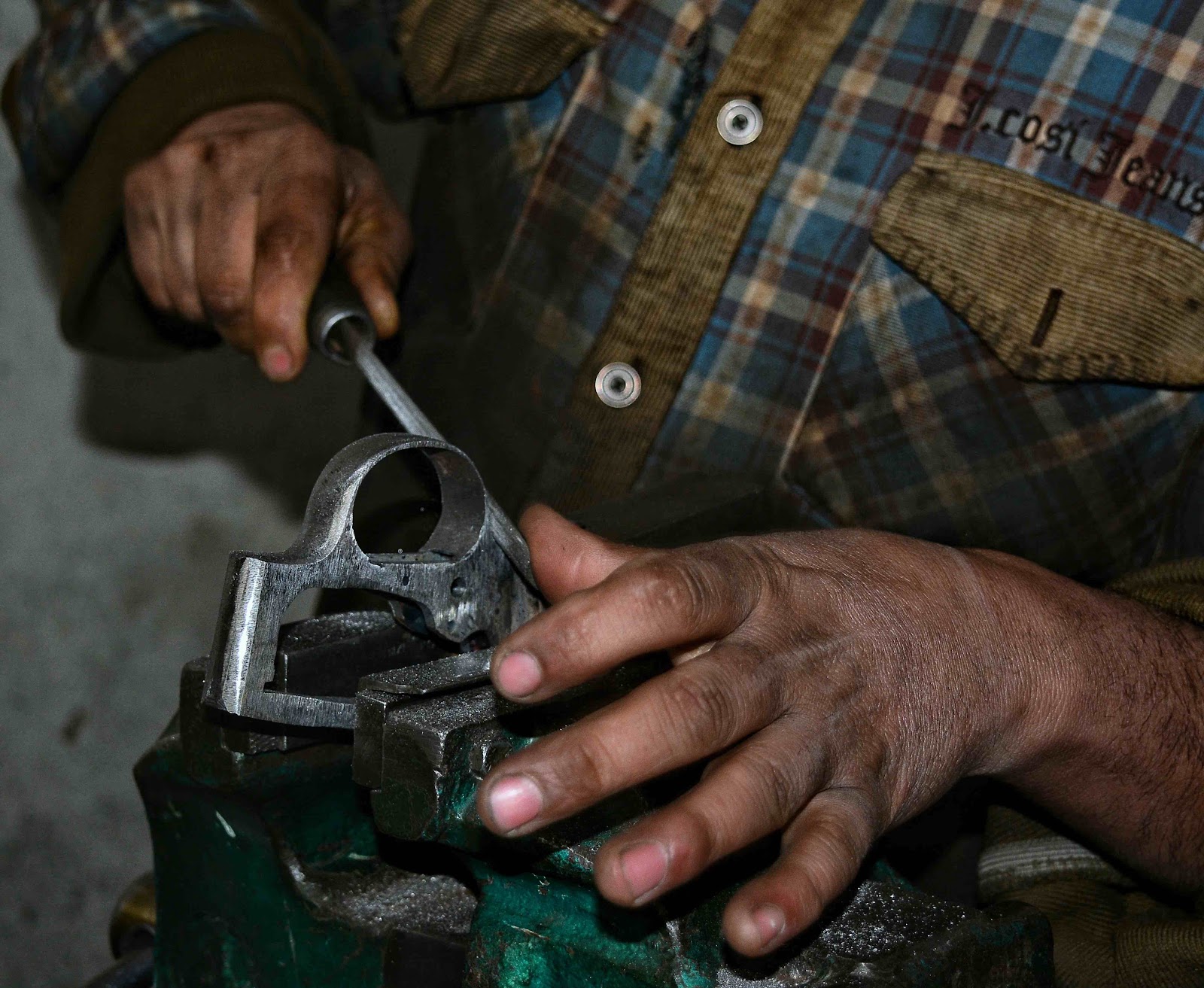 Each and every part of a gun is made with skilled precision and craftsmanship. 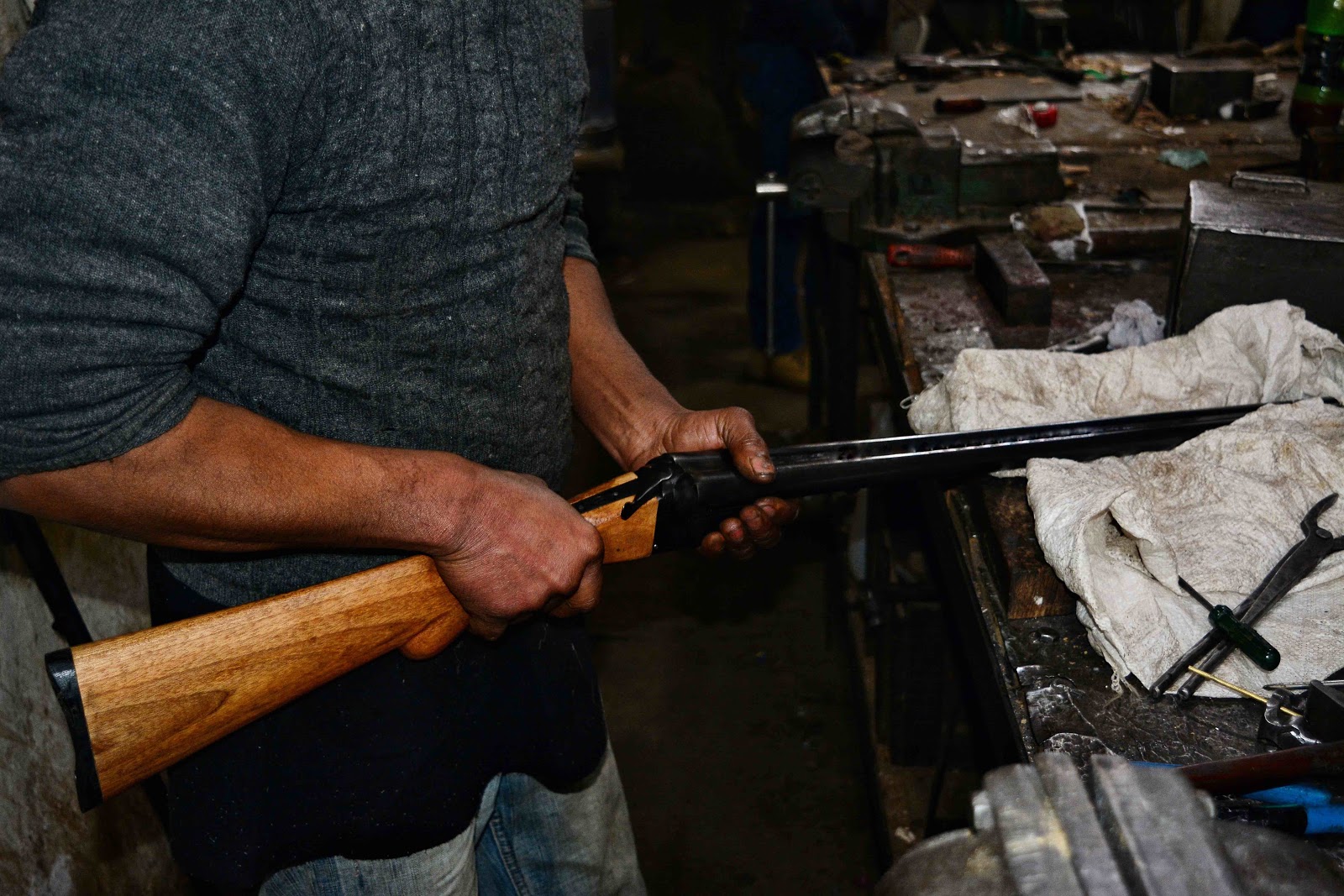 A worker tries to join a newly made butt with the body a gun. 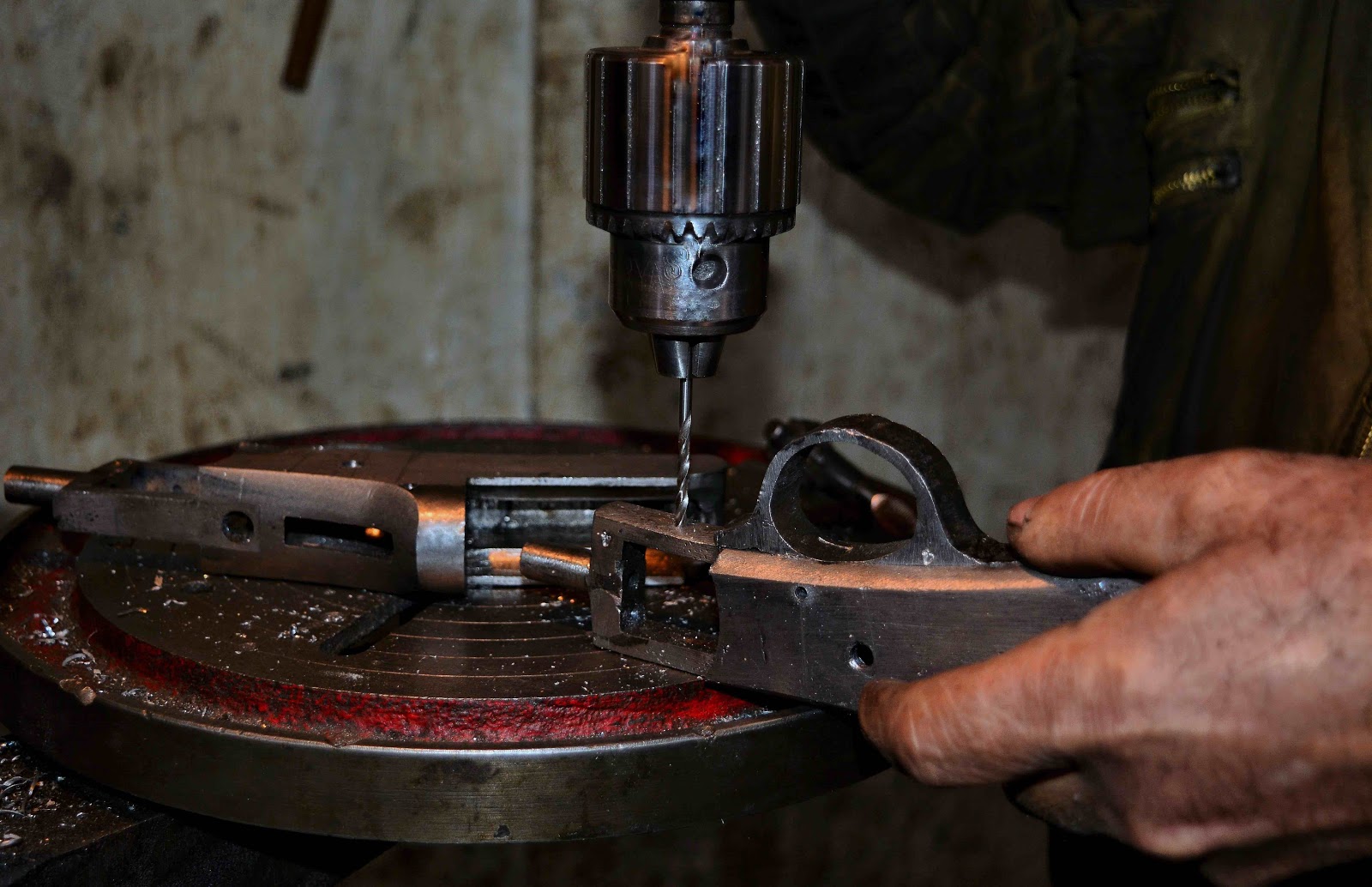 Guns made in Kashmir are not allowed to be sold until they are cleared by the testing machines at Lucknow and Kanpur. 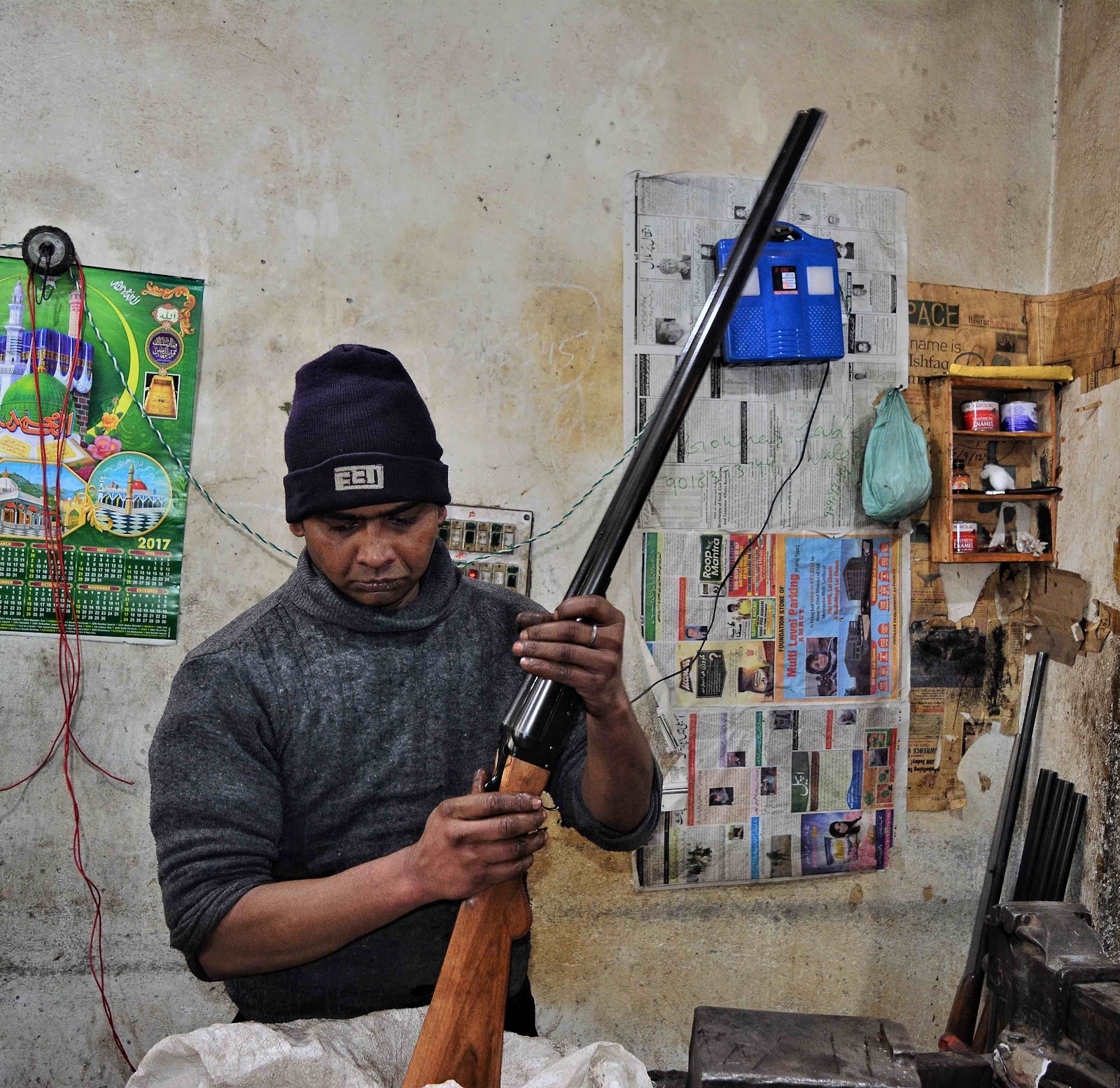 Kashmiri gun factories swarmed with customers before 90s but now they mostly attend to repairs in order to keep surviving. 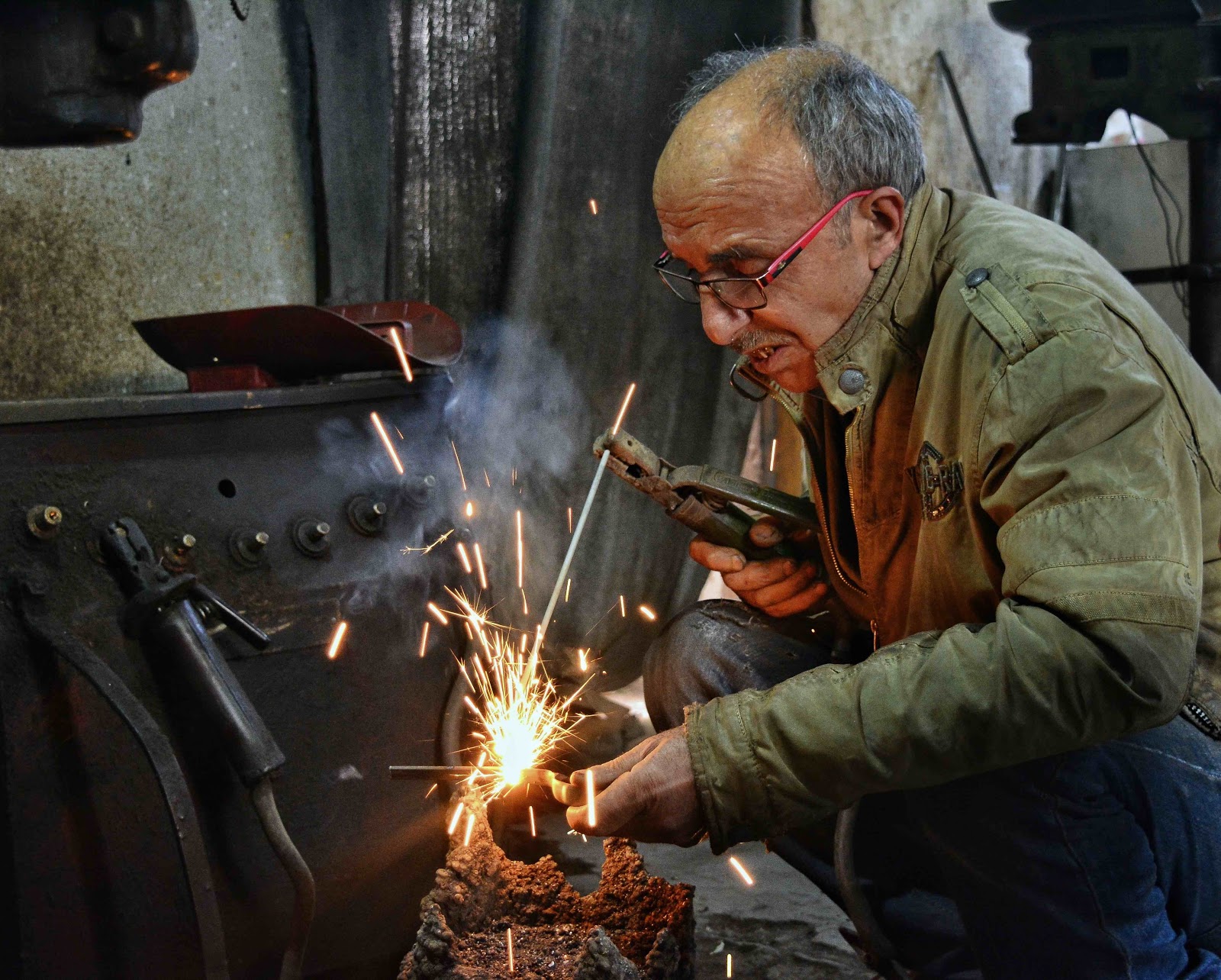 “The historical craft of gun making is literally on crutches right now. It is only a matter of years that this craft will become extinct.” Mohammad Amin, a veteran gunsmith said. 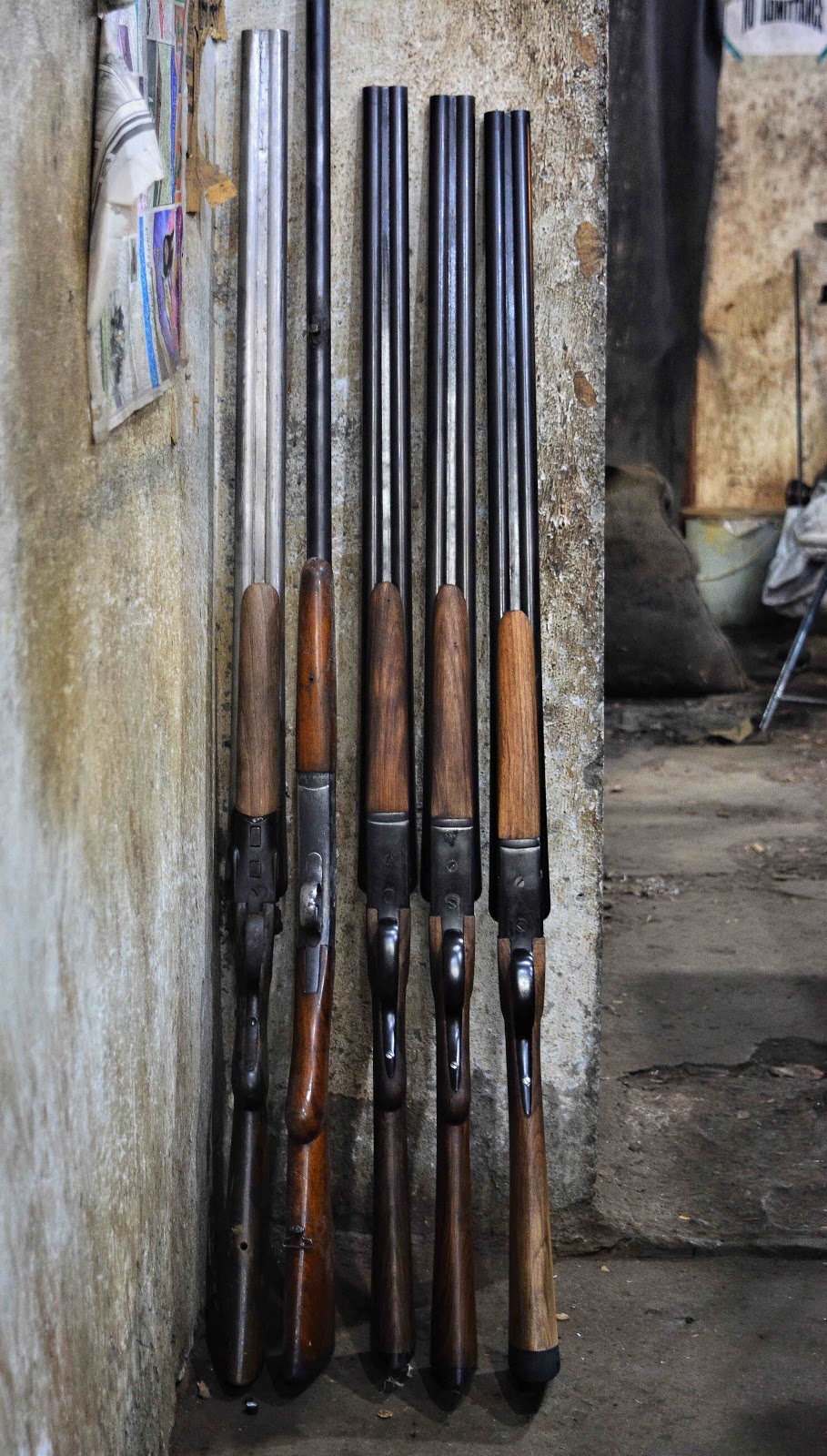 Kashmiri guns which were once highly valued and famous are silently eating dust in the two surviving factories of Srinagar.

(Photos and text by AAQIB HYDER)