Enough No More: JNU Students To 'Lock Down' University As Part of Massive Protest Against VC

Complete shut down of University for a week

NEW DELHI: Fed up with the “authoritarian” stance of the Vice Chancellor, and the constant decisions that strike against the democracy core of the academic system, the students of Jawaharlal Nehru University have given a call to lock down the campus for at least a week, if not more.

The students, in a massive show of strength last night at Azadi chowk in the campus, announced the decision in mashal lights. JNUSA will talk to the Teachers Association and urge them to take classes outside the buildings. The lock out will be in place for a week from Monday. As feb 16 is the last day for optional courses admissions, the offices will be allowed to function. But classes will not be held.

JNU’s Vice Chancellor M.Jagadesh Kumar has been on a collision course with the students, with a slew of decisions that JNUSU has been opposing as a violation of democratic rights and conventions of the University. The latest has been of compulsory attendance, with a march scheduled for February 15 to pressure Kumar to withdraw not just this one issue, but revisit all his “wrongdoings” according to JNUSU. The list is long and includes seat cuts, the reservation policy, deprivation points, the administration’s position on GSCASGm corruption charges. JNUTA has been asked to join the march. 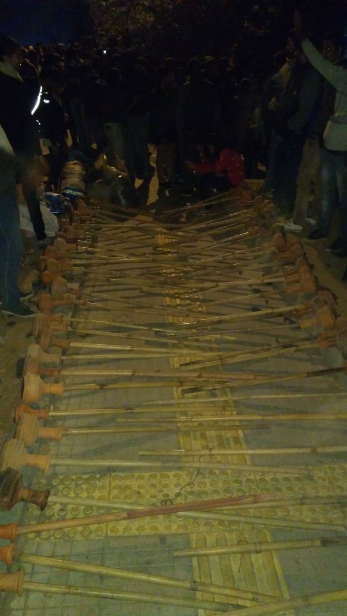 The students, aided by the faculty, have taken a clear decision to be on the roads until the measures are withdrawn or reversed. The march last night heralded the beginnings of the stir with the attendance unprecedented. The students responded to the call to “transform the walls of the pink palace into a complaint board by pasting posters with hand written complaints against the VC and his administration.” This will be followed by different programs every day.

THe JNUSU statement declares, “there is no going back from this point onwards. We have tried everything till now. And everytime we are confronted by more autocratic rules and regulations.” The statement ends with “either by part of a history written by others, or write your own history.” 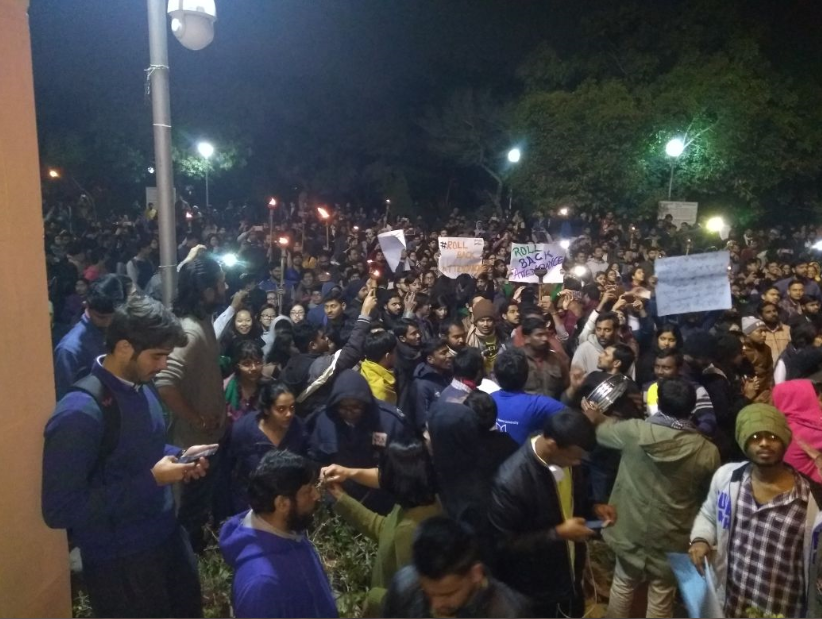 The Teacher's Body had initiated an enquiry against the VC last year. JNUSU students have been protesting against each anti-democratic decision designed to squash academic freedom . However, this is the first large scale concerted action against the VC with all sections joining in the lock down, with JNUSU taking the lead in mobilising and organising. The big gathering at Ganga dabha last night confirmed what many students could be heard saying, “there is no backing off now.”