When The (US) President Poops

NEW DELHI: Donald Trump’s arrival in the White House was celebrated and protested in equal measure, heralding a new era in American politics. This is especially relevant to kids of a certain age, as although adults might view a newly-elected president as one in a line of many, that same politician will define the office to an entire generation of youth the world over. Trump and all the vitriol surrounding him, have served as an unprecedented introduction to the highest levels of US governance for the youth.

The question then is how do you explain Trump and the politics that surround him to a child?

Two authors have a novel way -- an illustrated book about pooping. “When the President Poops” describes some of the moments a president might need to use the restroom: during important meetings, while in a helicopter, while answering questions from the press, etc. Aroop and Auyon Mukharji’s book serves as both a humanizing portrait of the presidency and also a cheeky criticism of Trump's approach to governance, all without reverting to the poles of exaltation or demonization that sometimes seem to be the only two perspectives on the man. 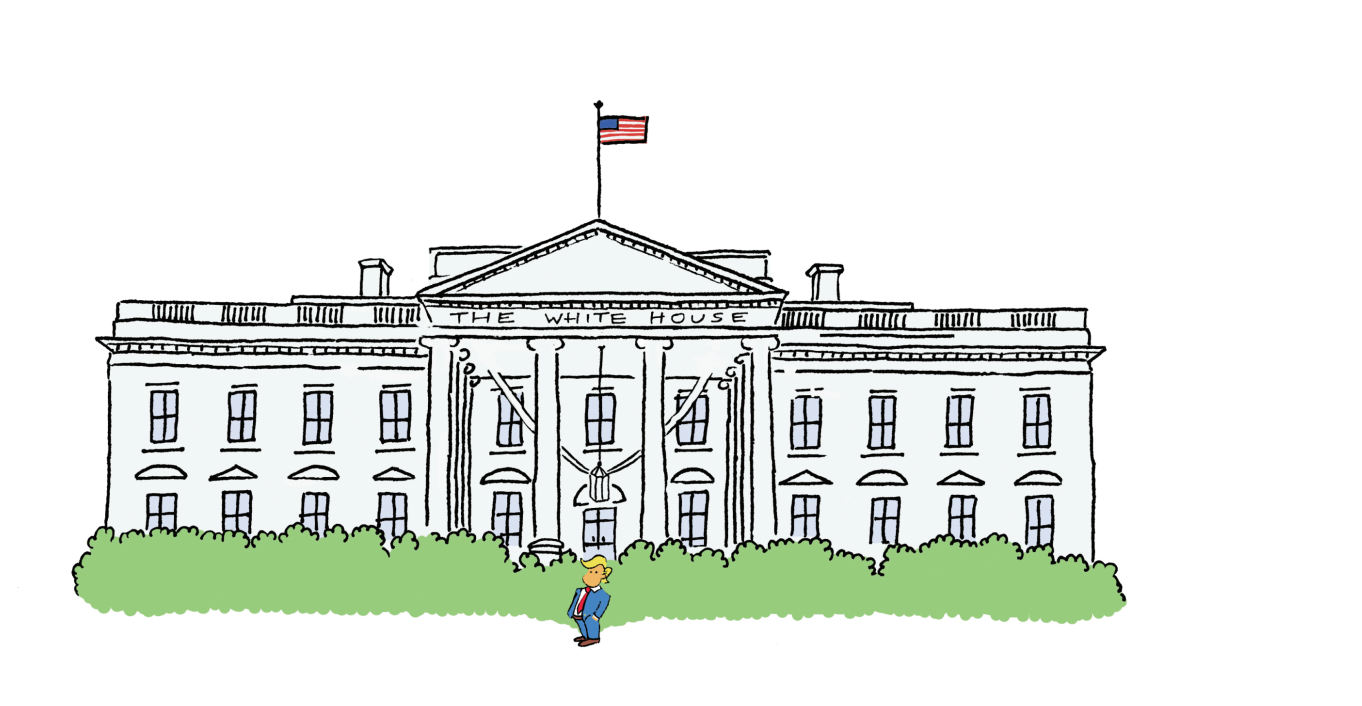 Both authors were born in the US and grew up in Kansas City. They attended Williams College in Western Massachusetts, where Auyon studied biology and Aroop majored in political science. Auyon went on to pursue music professionally with the band Darlingside, in which he sings, song writes, and plays violin and mandolin.

Aroop worked in Washington DC before pursuing postgraduate studies in the UK as a Marshall Scholar. He is currently a PhD student at Harvard studying public policy.

Most importantly, the brothers share an an intense fondness for small to medium-sized dogs.

We got talking to Aroop and Auyon about the book, and the unique choice of subject.

Why this topic -- of President Trump and his pooping habits -- for children? Why a children's book at all?

The book is the result of a confluence of a few different interests of ours. We both enjoy irreverent art, and we both love drawing and writing. We had also been wanting to do a project as a duo for awhile, and once inspiration struck, we decided to run with it. The goal was to produce a humanizing portrait of a polarizing figure as a way to gently introduce children to the presidency. Pooping seemed like a kid-friendly way to do so.

Why the scatalogical reference? It's obviously meant as an allegorical tool -- but do elaborate on the significance of choosing poop to comment on Trump's presidency.

Aroop briefly worked as an intern in the White House back in 2012, and since then he has wondered what exactly happens when the President must "balance the budget," so to speak. Does the whole world stop? What if it's in the middle of a national security meeting?

When Trump came into office, the chaos of his presidency inspired us to explore that idea further. We went from asking "What happens when an important person poops?" to asking "Can we use poop as a metaphor for our sitting president?" The man poops, and he poops often. He's fleeing the scene as journalists are asking him questions. He bolts during the middle of his meeting with Angela Merkel. He's of course doing something that everyone can relate to, but he's doing it all the time. It's something that makes children (and adults) laugh, and also, hopefully, think. 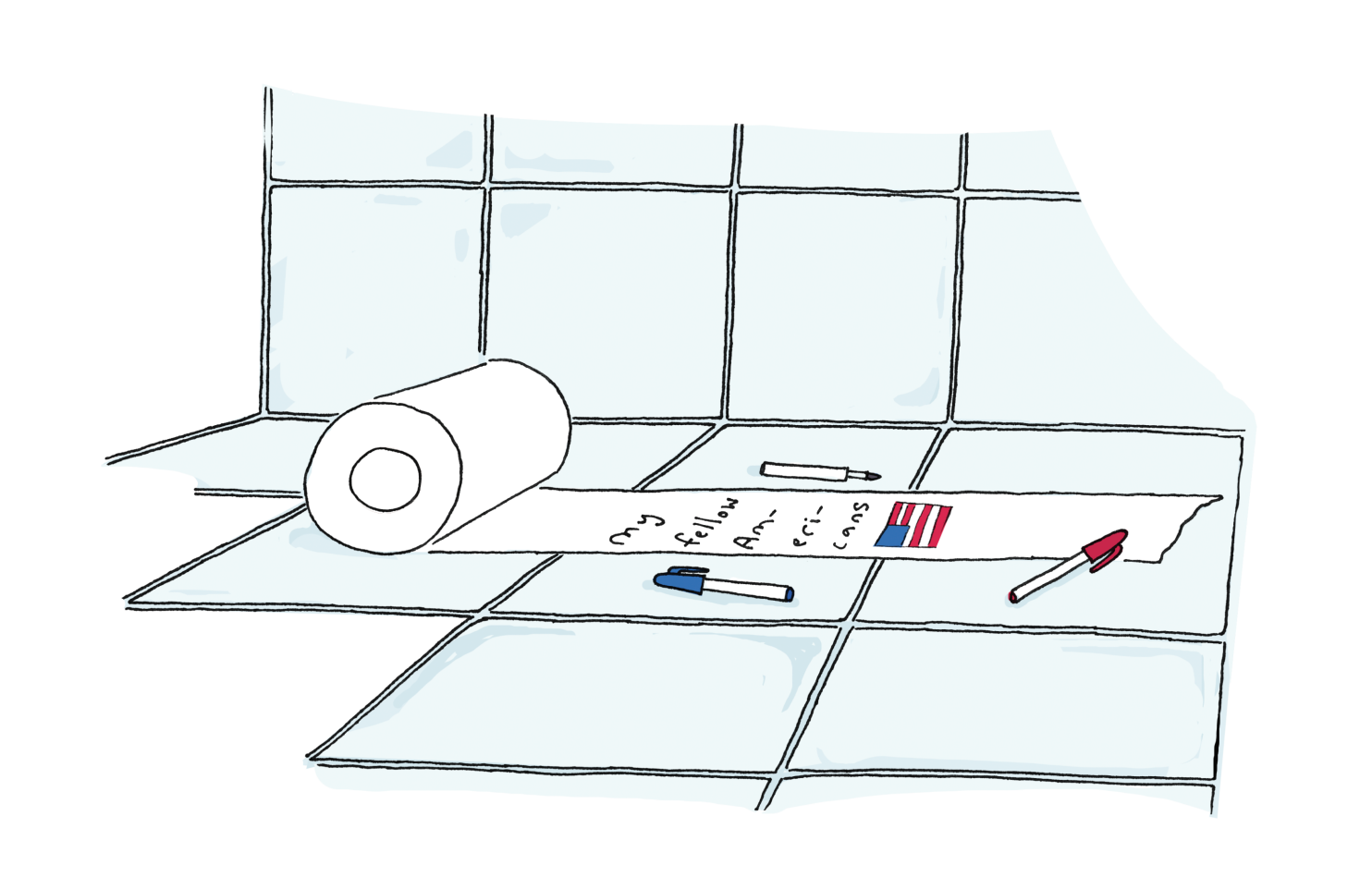 The idea came to us back in February of 2017, only a couple of weeks into Trump's presidency. We thought it would be fun to add something light-hearted and family-friendly to the conversation about the president. We started working on it in our free time pretty much immediately, and it took almost exactly a year to get it out into the world, from inception to publication. We had no idea it would take that long.

Would you call this book satire? Is satire important for children?

Absolutely, there is a satirical aspect to the book. But there's also a good portion of it that's not satire. Our hope was to appeal to children with a simple, grounding, poop-inspired portrait of the President, and to also appeal to adults with some satirical criticism in both illustration and concept.

The closest analogy we can think of is Shrek. Shrek is a movie that targets both adults and children, but on different levels. The storyline is great for children, while the referential humor engages parents. We were shooting for something similar.

Do you intend to criticise the President or is that just a happy byproduct?

Definitely. The nature of the criticism is meant to be more subtle though, in the vein of "he's a person like the rest of us" rather than a criticism of his specific policies. Neither of us are fans of the man, but the goal of the book wasn't to skewer him.

How do you want the reader / parents to view this work?

We're hoping people will feel as comfortable reading it to children as they might displaying it as a quirky coffee table (or bathroom) book!

Are you happy with the reception this book has received?

Absolutely. That said, we had no expectations. We were just excited to collaborate on our weird little piece of art and put it out into the world. We wouldn't, however, be upset if, as a result of this interview with The Citizen, the book became a number one bestseller across the globe.

Any other children's books in the pipeline? Given how contrasting your 'day jobs' are.

Our day jobs certainly are contrasting. Auyon is a full-time musician and Aroop is a PhD student in foreign policy. That's part of what makes these side projects so much fun. We've been throwing around the idea of another children's book about hipsters, and we're also considering starting a podcast together. 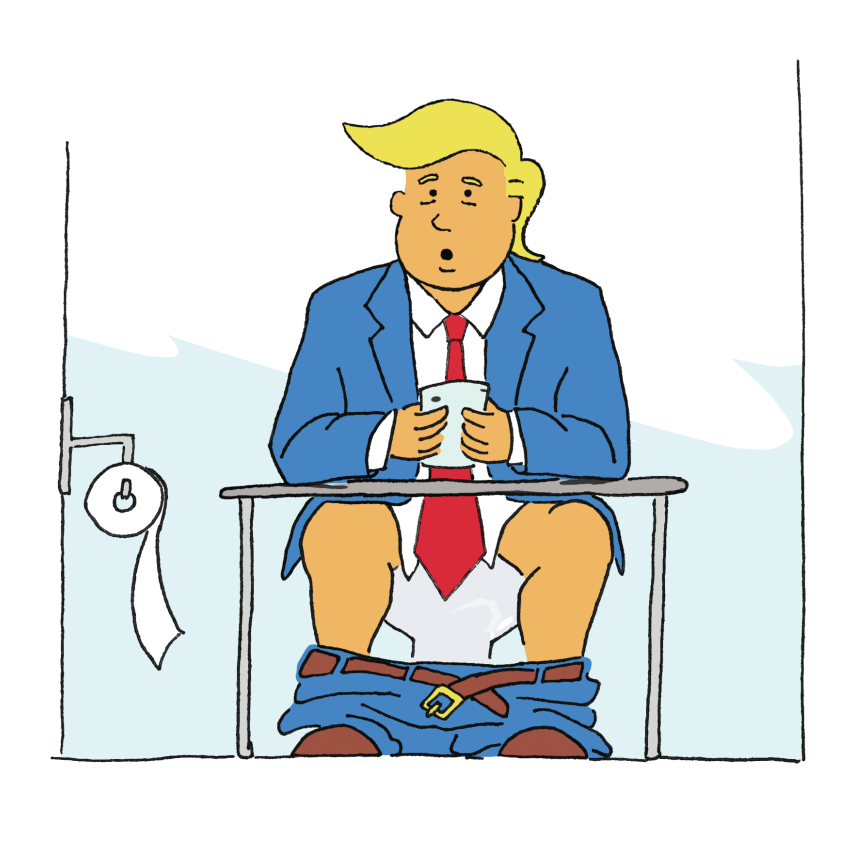