The new courses have prompted condemnation from both students and teachers

NEW DELHI: Recently, Jawaharlal Nehru University passed a bill in its 145th Academic Council (AC) meeting, where it was decided to open a new Centre for National Security Studies. The Centre will offer a number of courses, including ‘Islamic Terrorism,’ ‘Naxalism’, ‘Insurgency’ and others. The details of the courses are yet to be formulated but the blueprint for the Centre mentions that there shall be ‘complete autonomy over the agenda of research and course circula’.

The decision of the Academic Council has prompted condemnation from both students and members of the Teachers Association. At least 33 members of the council have submitted a letter to the JNU registrar raising the issue, as reported by Swarajya, an online news portal. 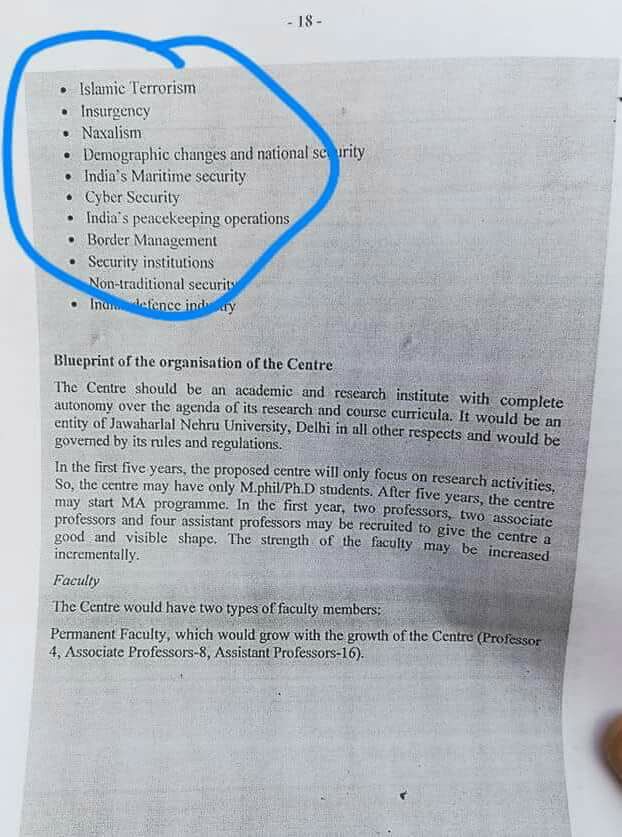 Speaking to The Citizen, Professor Kamal A. Mitra Chenoy, stated “It has been a tradition in JNU that all proposed new courses are vetted in the Centres and Schools of the University before being sent for detailed examination and necessary changes in the Academic Council. Under the current VC M. Jagadesh Kumar, this comprehensive circuit has been severely diminished. In the Academic Council the VC and his coterie ignored the sentiments and contributions of the senior faculty in framing the curriculum of the proposed new special centre for national security studies. This includes the Islamic Terrorism course.”

He went on to add, “It is not clear to any serious scholar why there should be an Islamic terrorism section in national security course. There is no significant evidence of Islamic terrorism in India or South Asia. Like many of the VC’s initiatives this Course is influenced by the RSS rather than academia. It is yet another instance of the VC in politicising study and research on the lines of the RSS. There has been no such initiative from 1966 to December 2017 in JNU. It is a flagrant effort to politicise research in the University. The Academic Council in significant numbers opposed this sub Course. The VC and his coterie unleashed applause and doctored the minutes of the meeting accordingly.”

JNUTA is shocked at the way in which the 145th Academic Council meeting held on 18 May 2018 was conducted by the Chairperson (Vice Chancellor, JNU) today. The Minutes of the 144th AC meeting, which have been objected to orally and in writing by several members of the Academic Council, and which have also been challenged in court, were declared confirmed without any discussion. No member, including the Deans and Chairs reinstated by the Delhi High Court, were allowed to speak at all. It is alarming that the highest academic body of the University, in which "due deliberation" must be accorded to all academic matters, was conducted by means of open suppression of dissent. The JNUTA is appalled at the brazen violation of the assurances given to the court by JNU that a full discussion of the attendance issue would take place in the Academic Council.

Apart from this, the Jawaharlal Nehru University Students Union (JNUSU) has also voiced its disapproval over the proposals made at the AC meeting.

In a conversation with The Citizen, Geeta Kumari, the JNUSU President commented, “This arbitrary decision was taken by the JNU Administration without any consultation with anyone else. Professors and students have already been working on these issues for almost a lifetime and a lot of research is still going on in the other centres on National Security and Religious Fundamentalism. So, what is the point of targeting one religion in particular because let's not try to ignore the fact that there is a fine line between religious terrorism and religious fundamentalism. Are we absolutely going to ignore the current scenario of the nation where people are getting killed every day just because they are Muslim?”

Highlighting the infrastructural aspect of the varsity, Kumari added, “Besides that, there is already a problem of infrastructure in the University where students from some centres face problems due to the lack of space while attending classes. So the imposition of one more centre on top of these issues without solving the previous issues is going to make the situation only worse.”

At least 33 members of the council have submitted a letter to the JNU registrar raising the issue. However, AC member Aswini Mahapatra, in a conversation with The Indian Express, said the course was necessary but the name should be changed from ‘Islamic Terrorism’ to ‘Islamist Terrorism’. “Islamist Terrorism is a widely accepted term and a globally accepted phenomenon. It is used for those who use Islam for a particular objective. There’s nothing called Hindutva terrorism; that was invented by the Congress to pander to the minority vote bank… There’s nothing called Christian terrorism also… In India, it’s basically Islamist terror, whether it is J&K or Kerala, so in Indian context, the topic needs to be studied,” he said.

But one can clearly refute the above statement on the very simple ground that recognising terrorism on the lines of religion, especially for academic research is completely irrational. Besides, the denial of the relation of the other religions as mentioned above portrays a completely contradictory story in terms of what is happening in the country itself, right now. And history has witnessed the role of organizations like the Ku Klux Klan in terrorising particular communities in the American society through religion. But the question in the larger context that should be posed right now is whether it is viable for a premiere institute of learning like JNU to introduce a coursework based on religious bigotry and sheer ignorance?

Apart from those who have opposed the decision, The Citizen attempted to reach out to the members who attended the AC meeting and had voiced their support for the courses. They remained unavailable to comment.

Criticism has also been received from other organizations like the Delhi Minorities Commission which has asked the Registrar to explain on what basis the course on “Islamic terror” is being started by the university, as reported by The Hindustan Times.

Speaking to The Citizen, Chepal Sherpa, Councillor of School of Social Sciences (JNUSU) said, “Islamic Terrorism and Naxalism etc. are being systematically made a part of syllabi to perpetuate a political agenda i.e. meant to target a particular religious community and a section of the society. It is meant to create hatred against Muslims and tribals of this country.”

Highlighting that the more significant issues of the AC meeting were left unattended, Sherpa further commented “The real issues like non-fulfilment of reservation in M.Phil. and Phd. admissions, scholarships etc. are being sidelined in the same floor of the AC meeting.”

He went on to add, “We are resisting this vociferously as the future of Universities are at stake and thereby what our coming generations would face. With these courses institutionalized, they want to change the very nature of the universities and want uncritical, doctrinaire and subservient ‘students’ to ‘pass’ from these institutions.”