Kaala will hit theatres on June 7

Rajnikanth’s latest movie Kaala will hit the theatres on June 7, 2018, but has already run into several controversies.

Pro- Kannada activists in Karnataka want the movie not to be released in the state because Rajinikanth has said that the Centre should implement the Supreme Court order to establish the Cauvery Management Board at the earliest.

This statement of the South Indian superstar was perceived as favouring Tamil Nadu, and soon snowballed into demands to ban his latest film in Karnataka. This stand against Kaala is supported by Sa Ra Govindu, the president of Karnataka Film Chamber of Commerce, with the organisation banning the film’s release in Karnataka.

The Karnataka High Court eventually stepped in to overturn the ban, but the controversy rages as the film will release tomorrow in the state with additional security provided to theatres screening it.

Twitter is stoking the controversy. Prakash Raj came out in support of Rajinikanth's Kaala, taking to Twitter to slam the Karnataka government for allowing fringe elements to take law into their hands. “What’s film #kaala got to do with Kaveri issue..?Why is film fraternity targeted always..? Will Jds/congress government let fringe elements take law into their hands ...like bjp did with #Padmavat ...or...will you step in to assure common man...his right for choice.#justasking...” tweeted the actor. 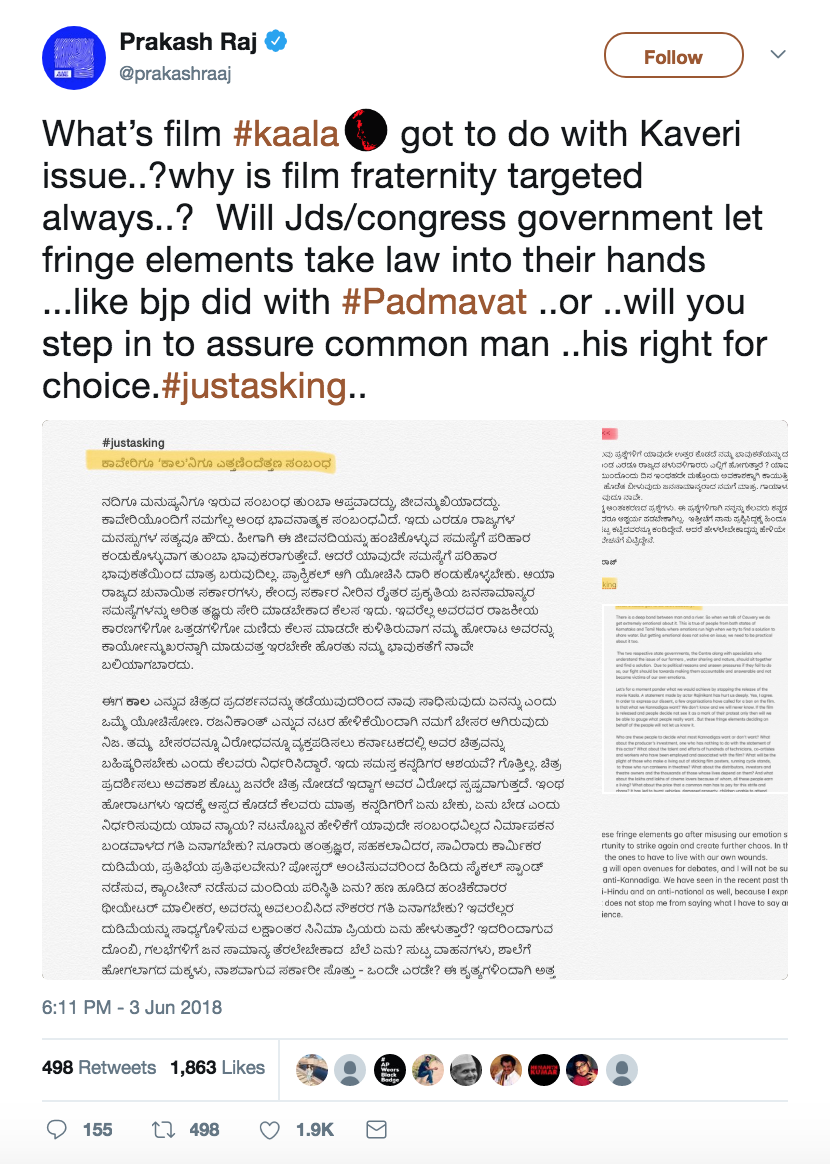 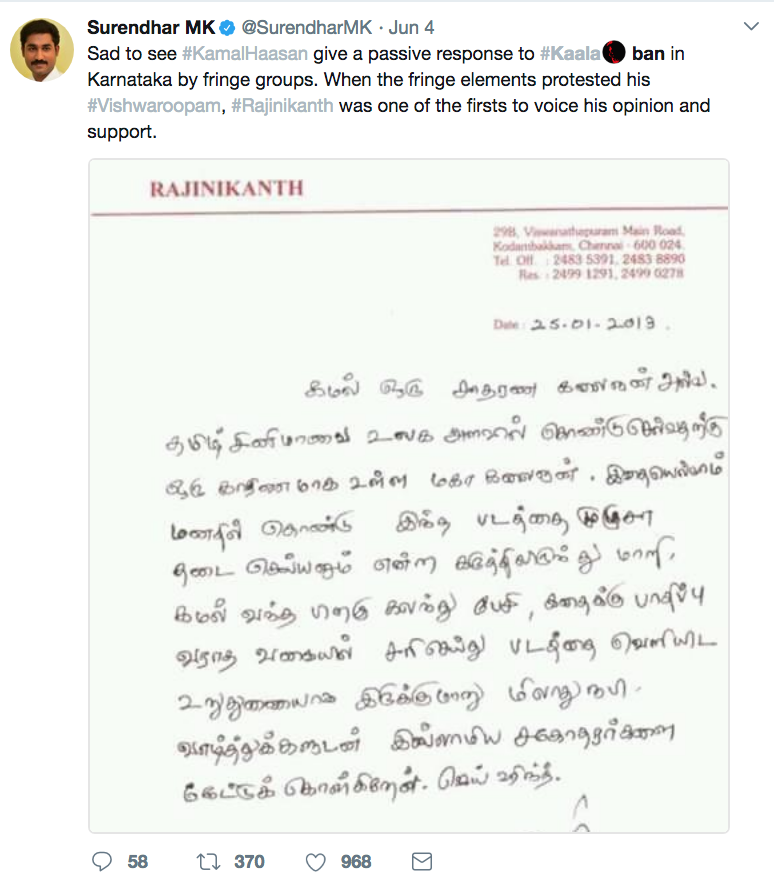 This is not the first time a movie has been banned, or mired in a controversy demanding a ban. In the name of regional pride premised on language, ethnicity, caste, class and religion -- fringe elements are dictating choices for a silent majority.

A recent similar incident was the release of Sanjay Leela Bhansali’s Padmavat -- members of Karni Sena, a politico-cultural group of Rajputs, manhandled Bhansali, vandalized cinema halls and openly threatened full blown violence if the movie was released. The protesters alleged that the movie distorted Rajput history, glorifying a barbaric invader as a lover and a brave warrior. The Karni Sena objected to the movie showing a love-affair between Queen Padmavati and the Allauddin Khilji. The Karni Sena’s protest led to mass violence across the nation including Delhi, Rajasthan, and Uttar Pradesh. Protesters outrightly threatened the cinema halls saying that they’ll burn down the place if the movie is screened. Padmavat (earlier, Padmavati) didn’t screen in Rajasthan and Uttar Pradesh.

Filmmaker Karan Johar, who faced a lot of backlash during the release of his 2016 film Ae Dil Hai Mushkil, for casting a Pakistani Actor, Fawad Khan, showed support for Bhansali on social media by saying, “I have faced a lot of controversies before the release of a film. I feel bad for a filmmaker, who is one of the best in the country. Sanjay Leela Bhansali has made a beautiful film and I hope he is protected by the people who understand that creativity is a form of expression. I think we should trust and believe him and give this film all the love.”

Another example is ‘Lipstick Under My Burkha.’ Directed by Alankrita Shrivastava, the film gained a lot of attention owing to the controversies it courted with the Central Board for Film Certification (CBFC). The CBFC reaffirmed its ruling againto not allow the film’s release, claiming that the film was too "lady-oriented", that it seeped in fantasy and that it could "hurt the sentiments of a certain community". Later the movie was passed and was a success at the box office.

The above incidents make it clear that despite protests and violence the movies do get a chance to come up on the screen. That said, the fact that groups can take law into their own hands, and threaten film screenings and release with violence, represents a disturbing new trend for Indian cinema and democracy alike.