The Evolution of The Indian Politician

Do we deserve our politicians?

We are not proud of our politicos. From comments that display an embarrassing lack of awareness of politics, geography and society, to blatantly communal attacks, with some sexist posturing thrown in for good measure, our Indian politicians may be the most ignorant of the lot.

If you think there is a measure of truth to the famous adage, “In a democracy, you get the politicians you deserve,” the following quotes may make you blush at the ignorance, sexism and intolerance that the Indian public (supposedly) represents. If you don’t agree with the oft-quoted saying (we surely don’t), then join us in laughing your pants off.

Speaking of pants, let’s start with our favourite, Rahul Baba, who famously quipped: 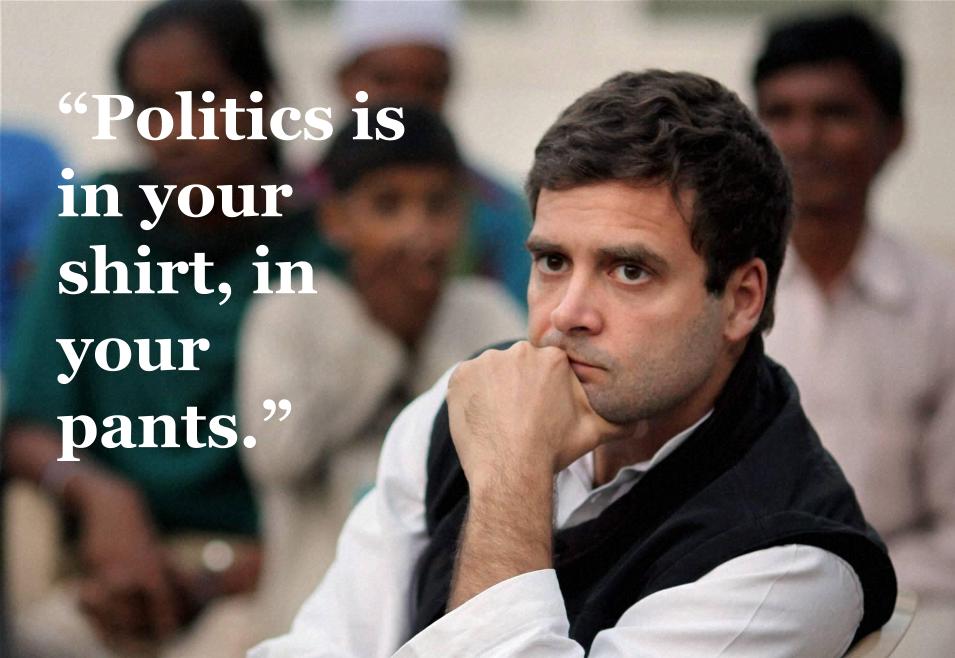 Ick. Nevertheless, some of the other statements Rahul has made compels us to recommend that he switch to another clothing retailer; a more patriotic one at that. 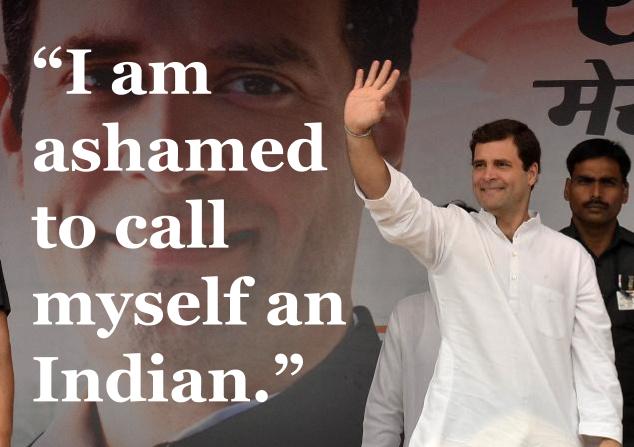 Not the smartest statement, whatever the context, given that his mother’s Italian heritage has been a point of attack for many opposing leaders. The truth is, we’re ashamed to call Rahul Indian; he needs to brush up on his general knowledge before we allow ourselves to cover him up in our national flag: 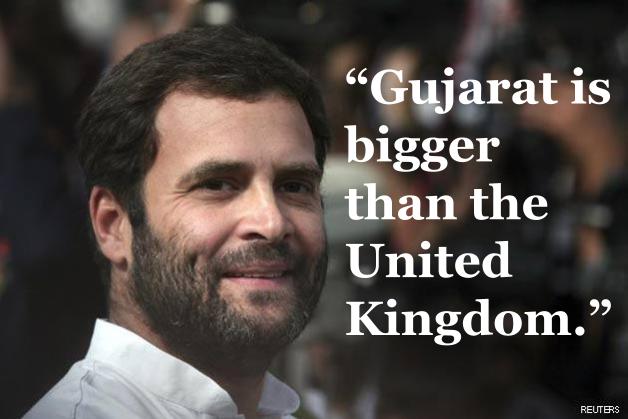 Really Rahul, really? An excusable error if you believe: 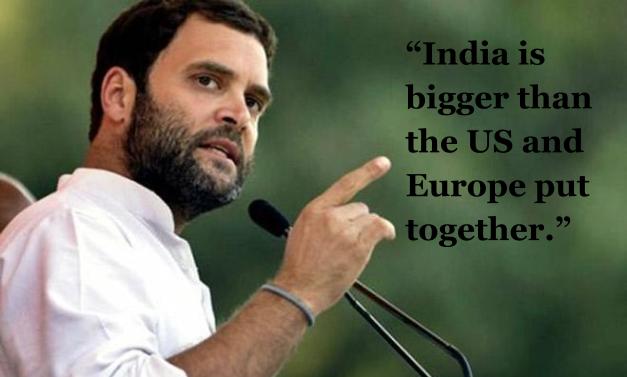 God help us if Rahul is ever put in charge of national security: 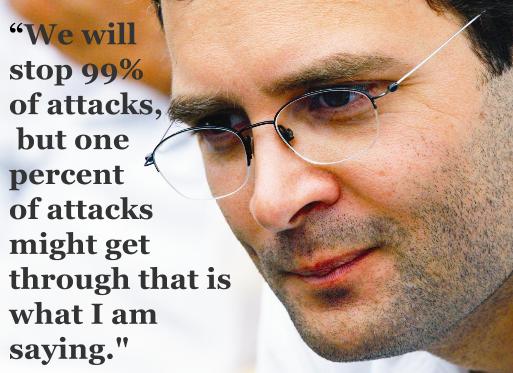 We’re surprised that this remark didn’t spawn it’s own “99% movement” in India. Anyway, Rahul went on to compare India’s financial capital to a war zone saying: 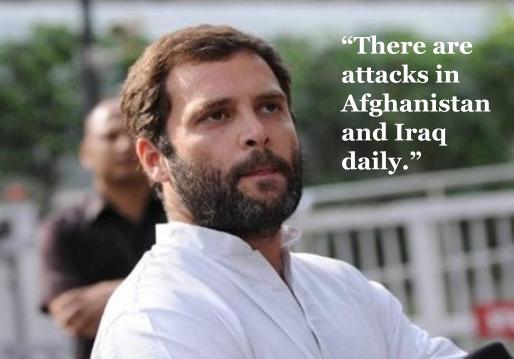 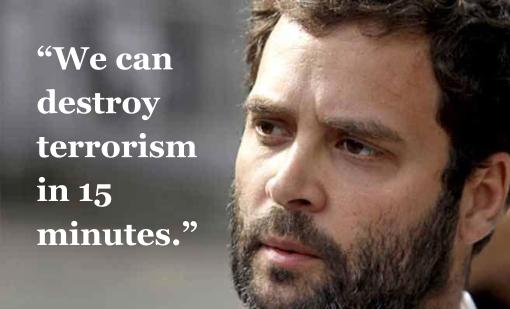 So is Rahul the dumbest (read, most politically incorrect and embarrassing) Indian politician? Let’s not be so quick to award him that title just yet.

Narendra Modi, who is usually fairly careful with his public statements, said in a speech: 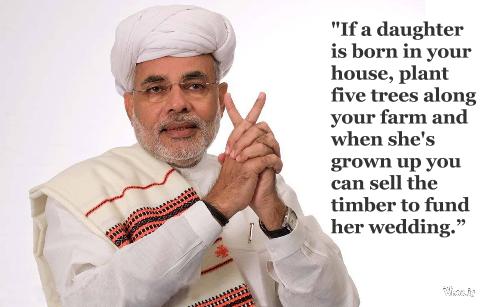 Is that your best recommendation for the use of timber Modiji? Our favourite Modi statement, however, is: 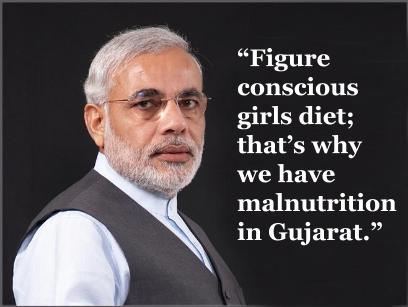 Wow, just wow! We wonder what Amartya Sen’s capability approach has to say about that! What is clear however, is that the BJP interacts with a lot of dieting, make-up wearing women. So much so that Mukhtar Abbas Naqvi declared: 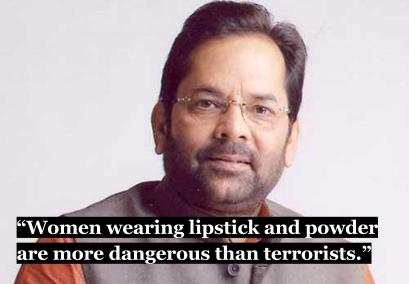 Whilst Modi and others blame women for malnutrition rates and terrorism, even more insensitive statements have been made in reference to blaming women for rape. NCP leader and Maharashtra Women’s Commission member Asha Mirge, in reference to the student who was raped in New Delhi in December, questioned why the girl was out with a friend late at night. Mirge went on to warn women to remain careful about the way they dress, lest they invite such incidents.

Mirge is not the only one (by far) to blame the victim for incidents of rape. At least the Haryana khap panchayat didn’t blame women (although it took the onus off men) in its understanding of what perpetuates rape, attributing rapes to fast-food such as chowmein. 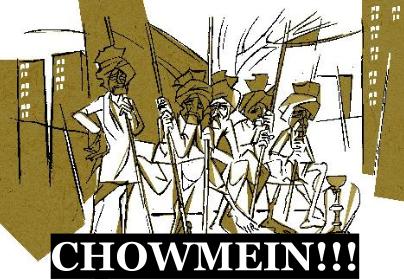 Nevertheless, we think it’s better to be in the company of women armed with lipstick and powder as their tools of destruction than party-people who may accept a bribe not realizing it is a bribe. A likely scenario given Samajwadi Party Leader Mohan Singh’s assertion that: 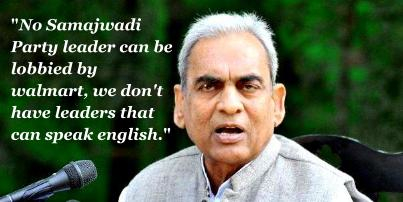 Of course, the Congress has its share of “we can’t believe he/she said that” moments. The usually silent Manmohan Singh opened his mouth to let us all know that: 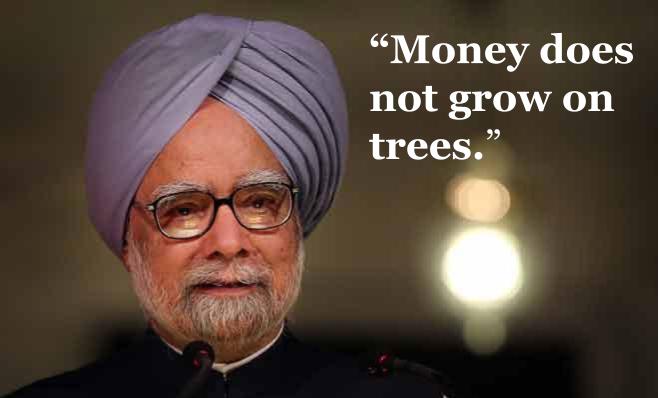 Thank you dear Manmohanji, but our parents told us that already. Singh’s advice on money is still sounder than Chidambaram’s, who tried to assuage our inflationary-fears when he said: 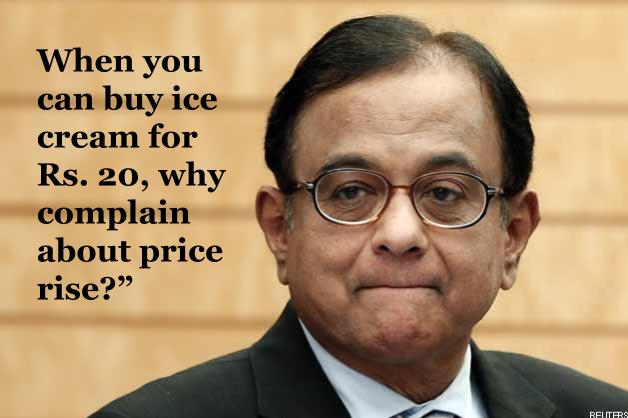 Tell that to Shiela Dixit Mr. Chidambaram, she thinks: 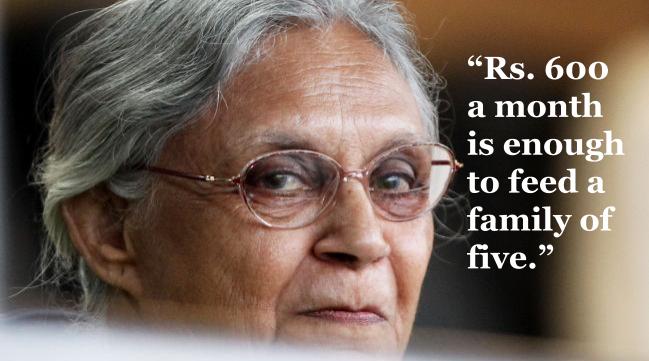 Shielaji, we need a minimum of Rs. 3000 a month to ensure each family member gets a twenty-rupee ice cream a day!

Not only does the Congress expect us to be happy ice-cream loving families of five (no wonder diabetes levels are so high in India), the party clearly expects that ice-cream enthusiasm to compensate for the lack of other, more basic expectations. Try telling your local congress-wala that your area doesn’t have adequate sanitation, and you may hear a throwback to Lalit Bhanot’s statement: 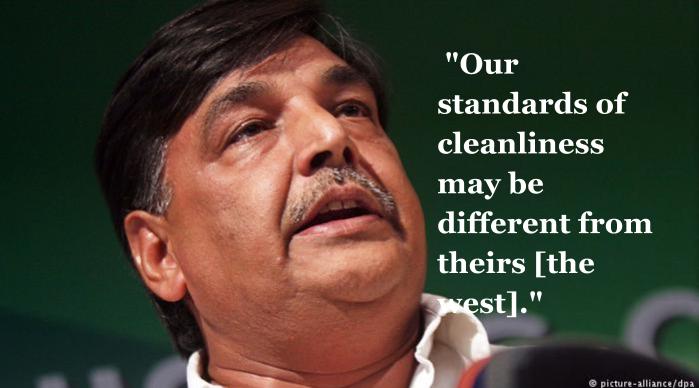 Well, we can’t expect much better from a party that has this perception of us (courtesy Robert Vadra): 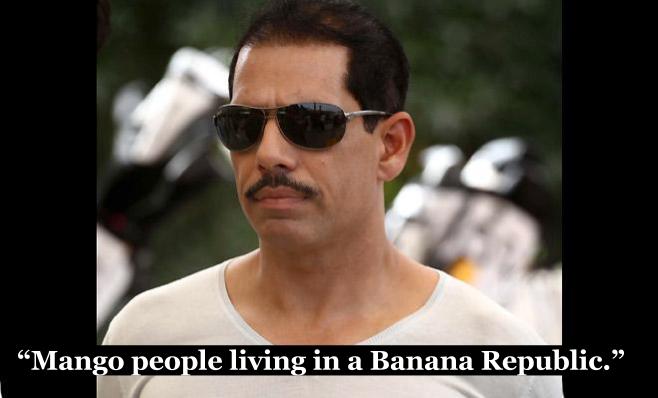 We have to add that whilst many of the statements being spewed by Congress leaders make us chuckle, some of the recent comments made by BJP leaders and their so-called friends/allies make us shudder (with fear, just in case you needed us to specify that).

Amit Shah, understandably, makes us shudder more than most others, encouraging acts of “revenge” and asking people to protect the izzat (honour) of their women: 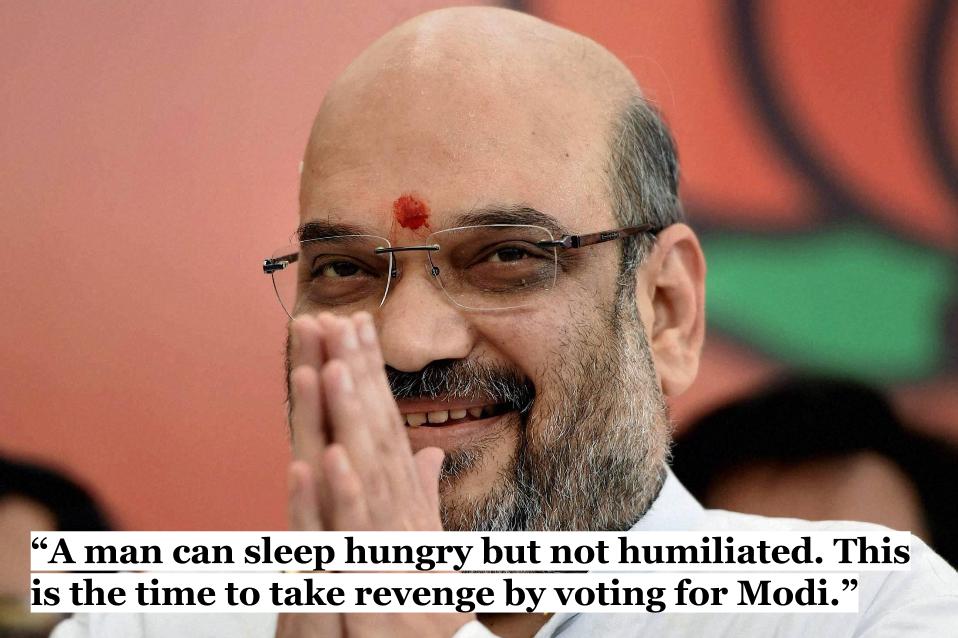 Then there was this gem from RSS chief Mohan Bhagwat: 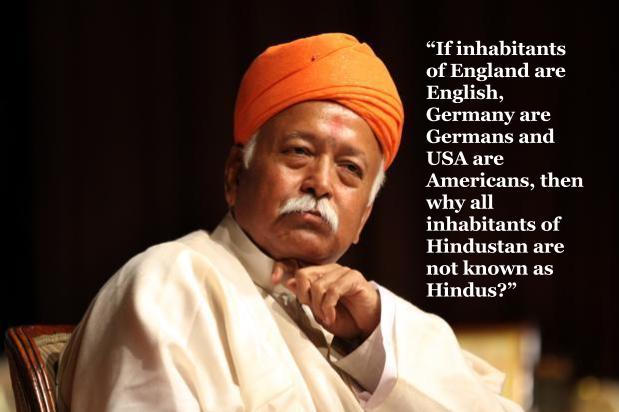 Sound logic Mohanji, but mayhaps because the inhabitants of India prefer to call themselves, y’know, Indian?

And let’s not forget this alleged activity of “Love Jihad,” also known as “Romeo Jihad,” whereby Muslim boys and men target girls from non-Muslim communities, duping them into converting to Islam by feigning love. BJP MP Yogi Adityanath even went as far as to label “Love Jihad” an international conspiracy, saying, “[Muslims] can't do what they want by force in India, so they are using the love jihad method here."

Our take on all this is best represented by another oft-quoted adage, “Make love, not war” folks! 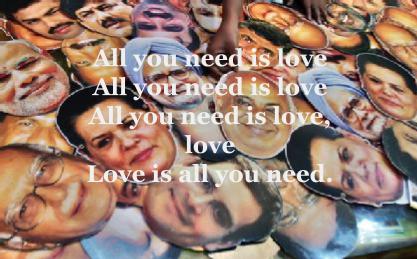