Anantkumar Hegde and the Erosion of Indian Political Discourse

Union minister Anantkumar Hegde is at it again.

NEW DELHI: Union minister Anantkumar Hegde is at it again.

After comparing the Kerala government’s handling of the Sabrimala Temple row to “daylight rape” of Hindus earlier this month, the minister stoked controversy on Sunday by saying that anyone who harasses a Hindu woman must be severely punished. He also alleged that the Taj Mahal and Qutub Minar were “definitely not” built by Muslims.

This is a Union Minister of India … who has, in the past, compared Dalit protesters with dogs, called the Church a conversion machine, advocated the changing of the Indian Constitution to remove the word ‘secular’, and openly said that Islam should be wiped out to bring peace.

Speaking at a rally organised by the Hindu Jagrana Vedike at Madapura in Karnataka, Hegde said that as a country, “we have to rethink our priorities in society.” “If a Hindu girl is touched by a hand, then that hand should not exist,” he elaborated.https://twitter.com/ANI/status/1089517283565883392 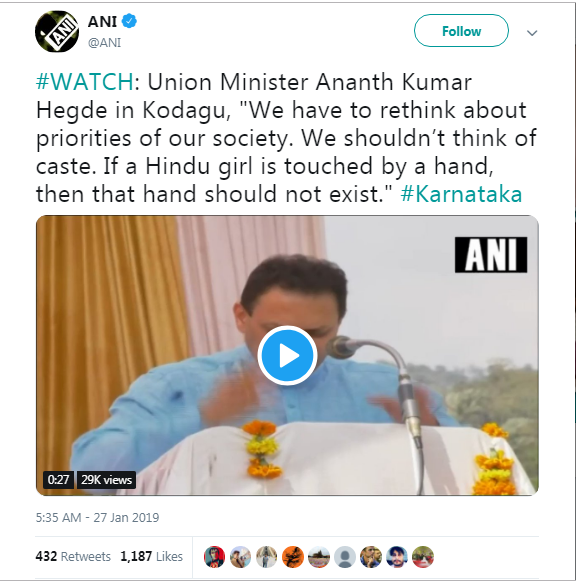 Hegde, in the same address, went on to claim that the Taj Mahal and Qutub Minar were not built by Muslims. Referring to the Taj Mahal, he said that “History says that, even Shah Jahan in his autobiography has said that he bought the palace from Raja Jaisimha, and that it was a temple constructed by Raja Paramardi Deva, Tejo Mahalaya, which became Taj Mahal.”

“If you go to that compound, you will see a board by the Archaeological Survey of India, not the Hindu Jagarana Vedike, Vishwa Hindu Parishad or RSS,” Hegde said in reference to Qutub Minar. “It is clearly written on that board that it was a complex of temples dedicated to 24 stars, of Jain temples, and this was destroyed by Muslim invaders. But governments over the past 70 years had said that Qutub Minar was built by Aibak. Lies, lies, lies, lies. They tried to destroy the identity of our community over these many years.”

The Minister continued in the same vein, saying that if Hindus kept sleeping, then their houses would soon be called “manzil” (a house of rest). “If this continues in the coming days, Lord Ram will become Jahanpanah and Sita will become bibi.”

Hegde urged right-wing activists present at the event to not be “sacrificial lambs.” “Only weak animals like goats and sheep are sacrificed to propitiate the gods, not strong animals like tigers and elephants. Hence, you too should not be weak and meek,” he said. Hegde also, in reference to reports that the two women who entered Sabarimala temple had initially sought sanctuary in Kodagu, said that local youth should take action against forces that are a “threat to society”.

Things took a turn for the worse (if that were even possible) when Karnataka Congress President Dinesh Gundu Rao called out Hegde for his remarks in a tweet. “Wht are ur achievements after becoming a Union Minister or as MP? Wht are ur contributions for Karnataka’s development? All I can say for sure,it’s deplorable tht such people have become ministers & have managed to get elected as MP’s,” Rao tweeted. 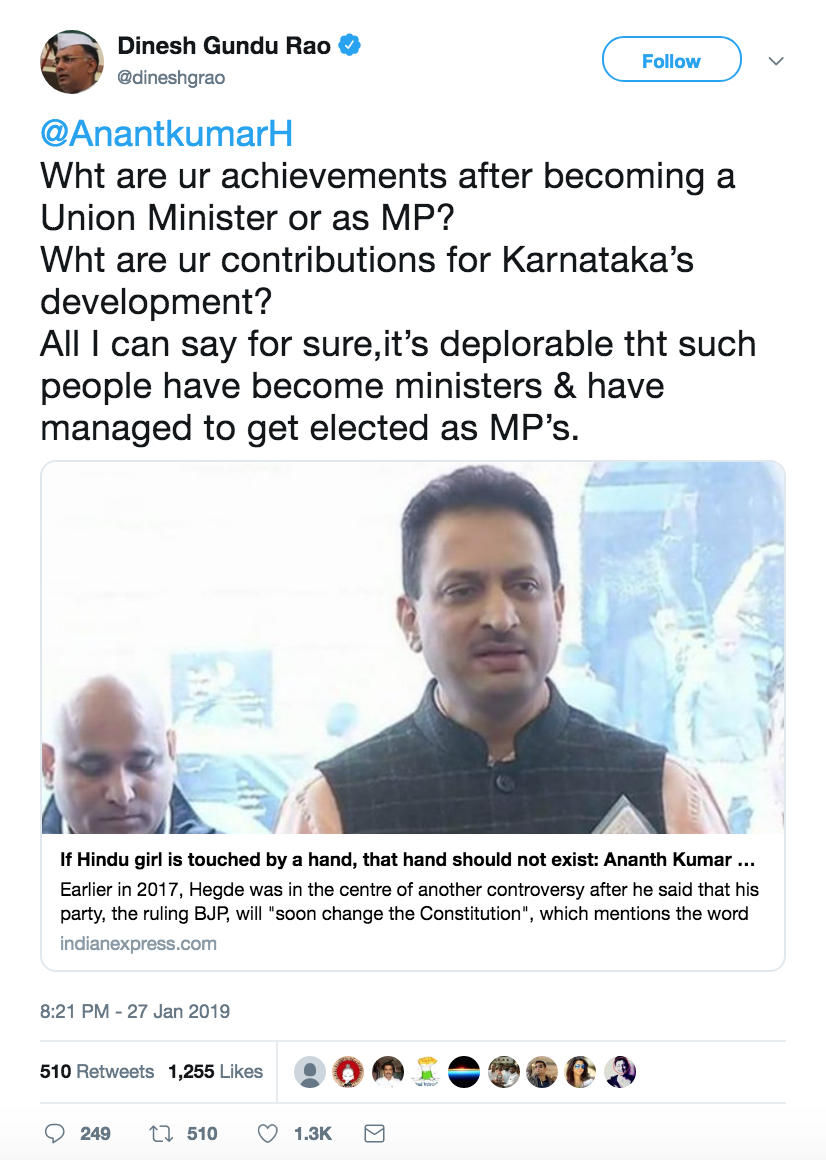 Hegde responded asking the Congress to talk about his own achievements. “I only know him as a guy who ran behind a Muslim lady,” he said. 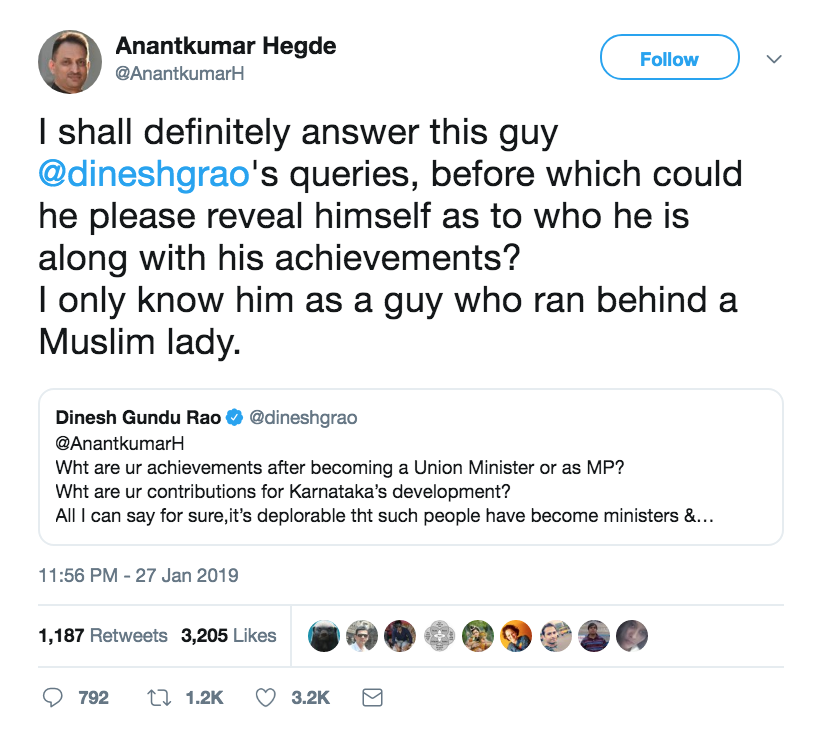 The statement prompted a response from Rao’s wife, Tabassum Rao, who took to Facebook to say, ““I have never made any personal remarks against any BJP leader and I strongly resent them using me as a pawn in their cheap politics… If they have the courage, they should challenge my husband politically instead of hiding behind a housewife’s saree and throwing stones.” 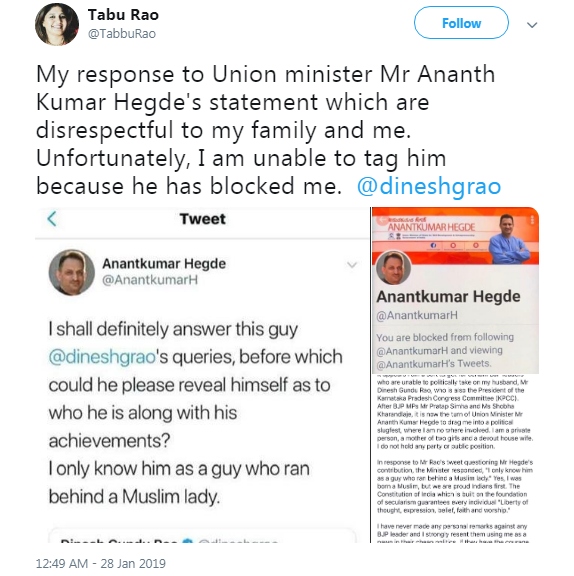 Congress President Rahul Gandhi responded saying Hedge was an embarrassment to every Indian, and that the minister should be sacked.

Hegde’s remarks at the event, and the Twitter slugfest that has followed has received its fair share of media attention … understandably so as the man in question is a minister in government, and a five time MP. He’s the only non Congress politician to have won from Uttara Kannada (formerly Kanara), a communally sensitive constituency.

His comments are also not an aberration when it comes to Indian political discourse today, as more and more leaders make the news for derogatory comments, mostly with an overt communal colour.

Perhaps most importantly, Hegde’s comments are indicative of what to expect in the upcoming general elections …