Learn About Growing Up Muslim in India, Help Fight Islamophobia


I was in class five and we had just got our report cards. Everyone was looking forward to a new class and a new class teacher; that’s when Ayushi asked me, “Whose class do you want to go to?” Without a thought I said “Ma’am Hasan’s!”

I hadn’t given it much thought other than that she was friendly, and often took her students to the computer lab. The next words that came out of my friend’s mouth have remained etched in my memory. She said, “Accha she is a Muslim na, you will be her favourite student.”

As an adult I have thought of numerous comebacks, as a kid I had none.

The innocent naïveté that distinguished the incident has transformed into an arctic climate with regard to Islam. Growing up there were times when I had to explain why my faith did not allow me to drink alcohol and why it was alright if some ate pork. I was questioned often about my stance on Kashmir and why I fasted during Ramazan.

But college taught an important lesson: that my experiences were not unique and that I was part of a stereotype. With the coming of a right wing government, we are now being subjected to a completely different kind of scrutiny. From extra security checks, to right wing propaganda, to being told that Muslim men are violent and Muslim women need rescuing.

It has been a roller coaster ride but we must refuse to just sit and feel sorry for ourselves.

Who is an Indian Muslim?

In 2017, Hussain Haidry’s evocative poem managed to both soothe and infuriate. ’Hindustani Musalman’ broke the monotony of viewing Muslims as a block and drew attention to the differences among them, of caste, class, belief, dietary habit, personal choice.

The growth of religion-denominated nationalism means a tendency to see Hindustani Musalmans as only those who are grateful and conform to the ideals set by majoritarian forces. The country was crisscrossed with Muslims being lynched, abused for not chanting bharat mata ki jai, and attempts to disrupt communal harmony - Haidry’s poem on plurality was a silver lining with shadowy undercurrents.

But not every Muslim would bow down before an idol. Not every Muslim would believe in the teaching of other holy books but respect them. Some interpret the Quran liberally, others conservatively. But we are all Indian Muslims. There cannot be a narrow definition. A Muslim falsely accused of a terror attack is as much an Indian Muslim as the American educated Muslim who plays Holi.

The problem arises because we have created stereotypes of good and bad Muslims. In my experience the beginning for this was made on Twitter, and then carried forward to the streets.

Islam must be the most discussed religion in media and society. It’s time we let Muslims speak for themselves, and address Islamophobia and misunderstandings about religious practices. It was in this regard that I started the campaign #AskAMuslim in India. On Twitter where religiously abusive trolling is common, the hashtag is important. 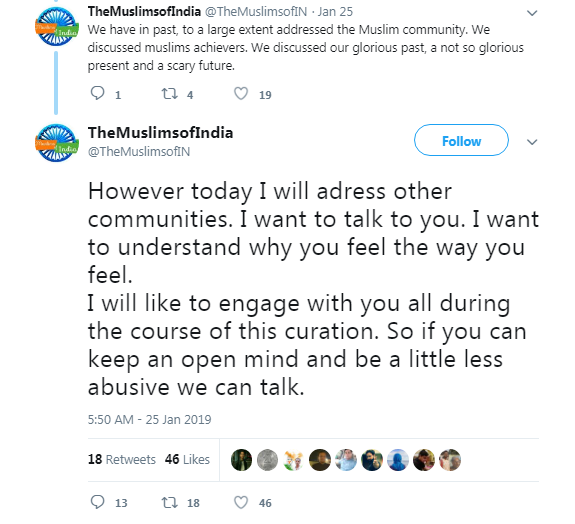 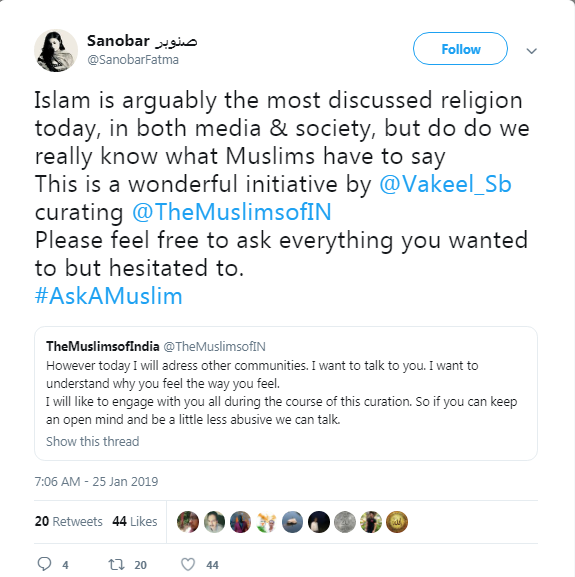 The twitter handle @theMuslimsOfIn has a curator every week to write about their experiences of being a Indian Muslim. A major achievement was the campaign of #Iftar4all which tried to break taboos and misbeliefs regarding Ramzan. 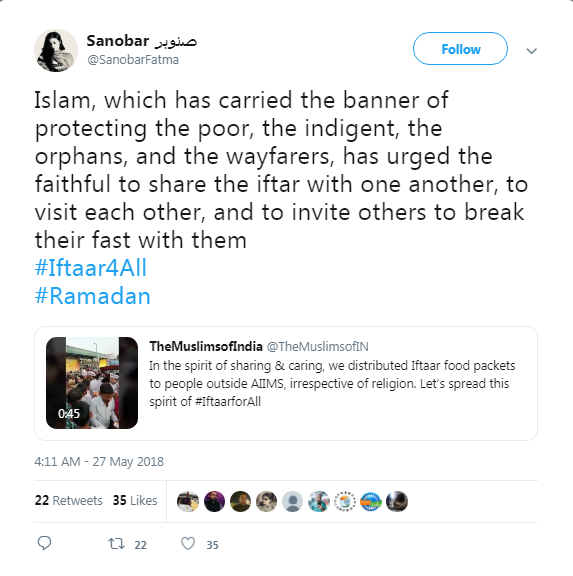 Last week the curator was Anas Tanwir, a lawyer at the Supreme Court of India who wrote about some apprehensions as an Indian Muslim and why we need to constantly assert our identity.

The discussion concentrated on Muslim stereotypes: from the hesitation towards idol worship to not eating meat every day. 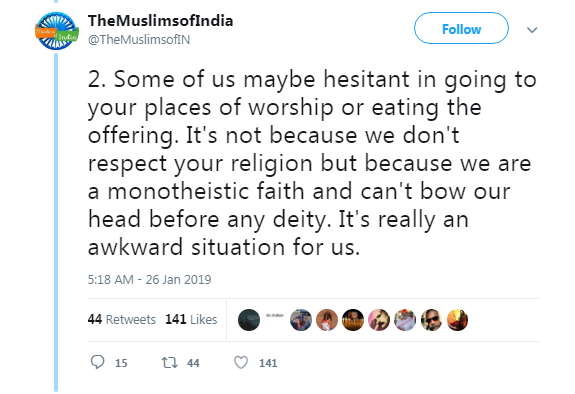 The hashtag received much appreciation and some inevitable abuse. 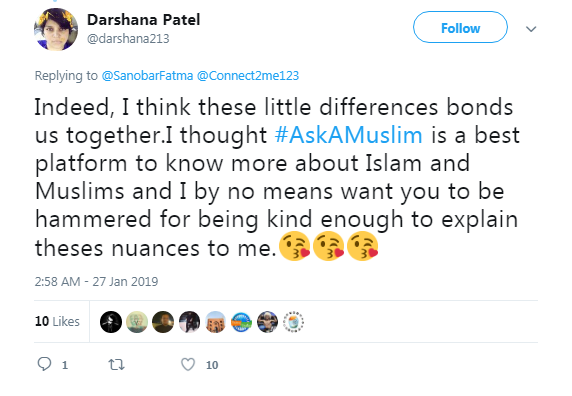 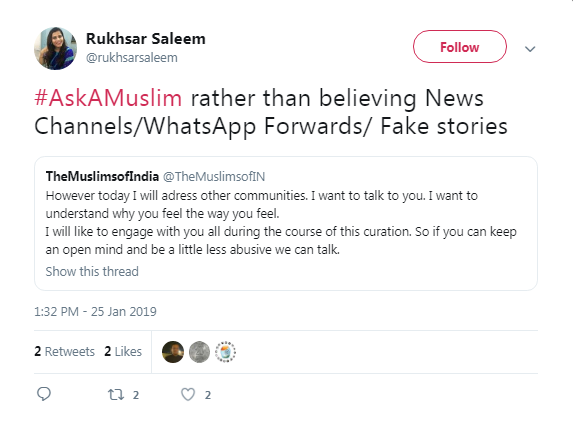 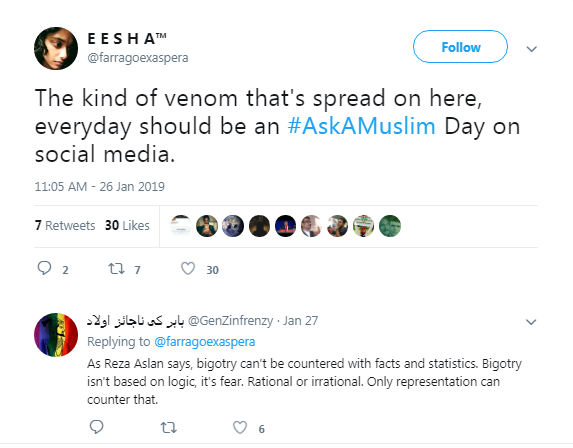 Overall it helped answer many queries, from caste in Islam to terms Indian Muslims had never heard of before. 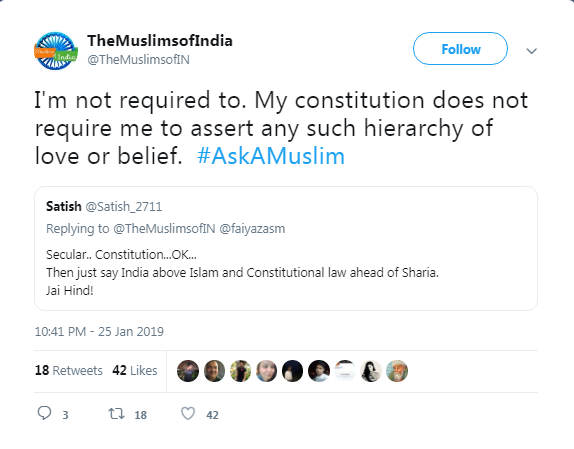 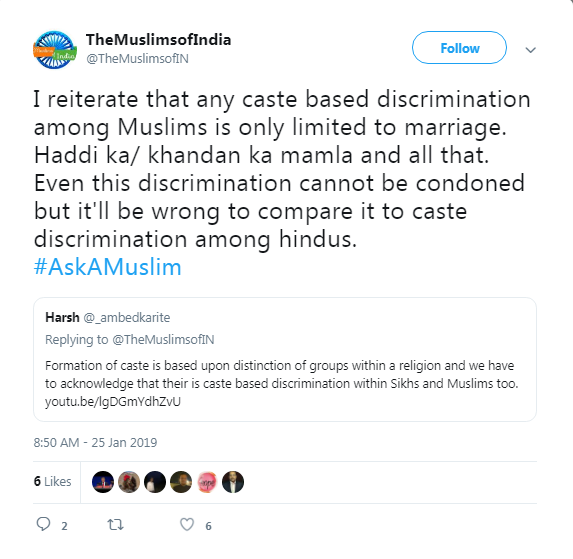 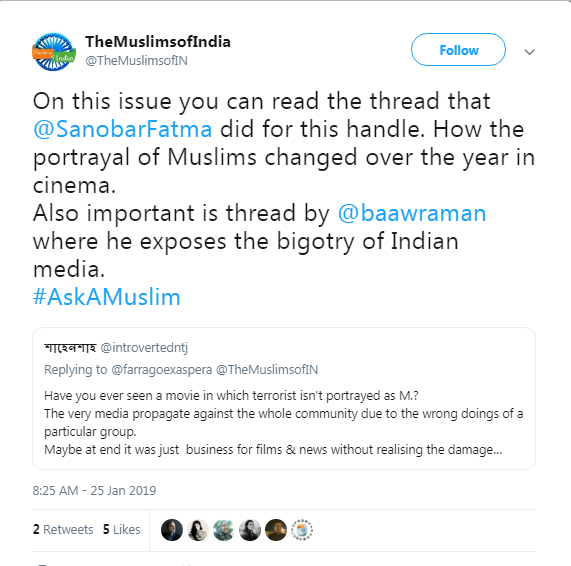 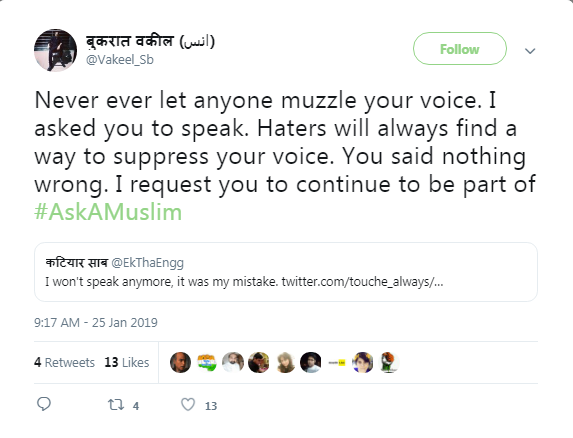 The Othering of Indian Muslims

In debate after debate people accuse Muslims in India of being anti-nationals, Pakistan sympathisers, and perpetual hate is spewed by a prejudiced media. Hate crimes are being normalised and Muslims made to feel that they are responsible for their situation, because they refused to toe the line set by the majoritarian politics which divided the country.

A friend told me he is so used to being called a Pakistani that he has internalised it and frequently jokes about it.

But we have played as much of a role in building India as other communities. Two slogans that are today considered the epitome of nationalism, “Jai Hind” and “Bharat Mata ki Jai” were both coined by Muslims. While the former was written by Abid Hassan “Saffrani” the latter was coined by Azeem Ullah Khan who wrote “Madare Vatan ki Jai”. It was only later that it took the present form.

Even the flag of India was designed by an Indian Muslim woman, Suraiyya Tyabji.

On the eve of Independence my grandfather was asked by his friend whether he would leave India for Pakistan. The friend tearfully added, ‘Aapke bina accha nahin lagega’ (It won’t feel good without you). To which my grandfather replied that this is his nation too. That they had together seen the dream of an independent, prosperous India, and now that the dream had come true he would not abandon it.

My grandfather was not alone, and many of that generation discarded Jinnah’s two-nation theory and believed in a secular India.

But not everyone wanted Muslims to stay back. Meera Rizvi, a media professional wrote about the experiences and horror of Partition when her father was told, “You go to Pakistan.” Her words echo the dilemma of every Muslim, as captured by the character Salim Mirza in Garam Hawa.

Seventy years later, there is again an attempt to divide and polarise. Much of our anxieties are based on irrational fears, misconceptions, and the deficient knowledge that has allowed this fear.

This is why #AskAMuslim is important, and we hope to take the campaign beyond Twitter and hold an open-house discussion to invite people to clarify their misunderstanding and uneasiness about Islam.

How often have we heard “Oh my father’s driver is a Muslim but he is different from other Muslims” or “My friend is a Muslim and but she is not like typical-typical Muslims”? 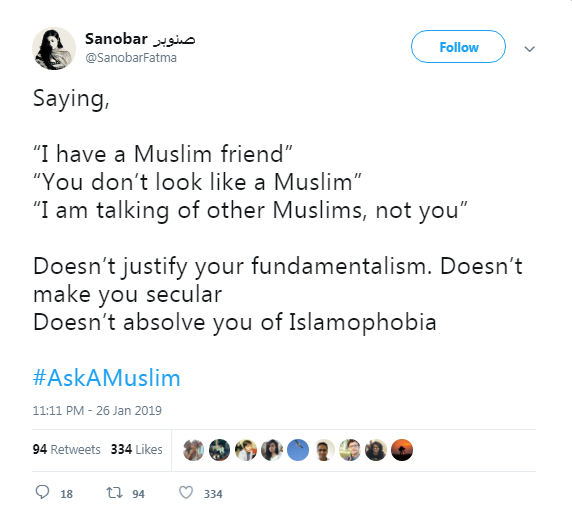 With the increasing level of scrutiny and tension, not to mention violence, let us start a conversation. Let us understand what Muslims have to say, before judging our campaign, #Ask a Muslim. 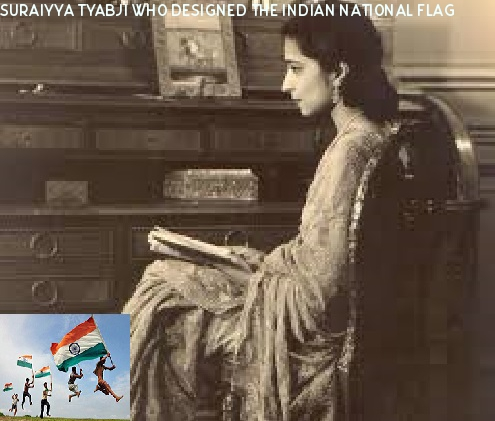