After an absolute landslide victory of Aam Aadmi Party(AAP) over the Bharatiya Janta Party(BJP) in the sixth assembly elections, the current assembly has emerged as Delhi's youngest assembly ever. Arvind Kejriwal who was sworn-in as Delhi's chief minister(CM) for the second time, is the youngest CM of Delhi.

The age factor is not limited to Kejriwal, the average age of AAP legislative members is only 44 years. The youngest legislators of AAP, Prakash Jarwal and Ritu Raj Govind are only 27 years old whereas the oldest AAP legislator, Hazari Lal Chauhan is 66 years old. In fact, Prakash Jarwal is not only the youngest candidate but also accounts for the highest vote share of 71 percent in the current elections.

The number of AAP candidates contesting for the first time were more in 2015 elections than in 2013. There were 28 new entrants in AAP, leading to the terminal where AAP emerges out as the youngest legislature of Delhi as well as with maximum freshmen in its brigade. It would be interesting to note at this point that the INC which was clearly sidelined in the elections, failing to score even a single seat, had Ajay Maken as their chief ministerial candidate, who was elected as the youngest member (then 29 years old) of Delhi assembly in 1993. 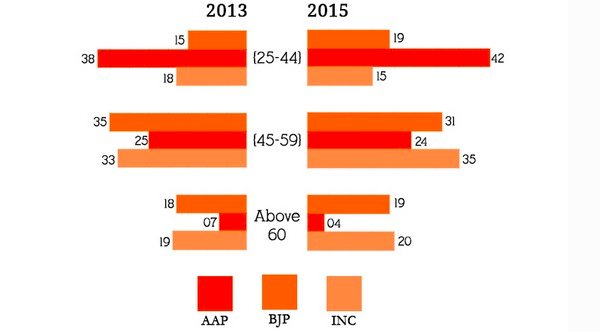 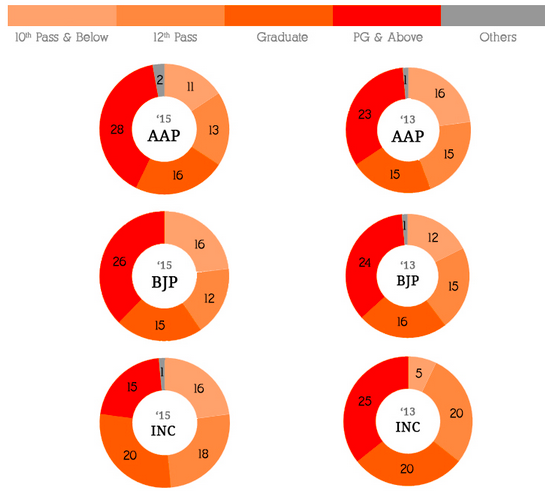 Even though AAP literally emerged out of aam(common) people, but the AAP candidates in possession of 1-10cr. assets is close to that of Congress, while BJP fell a bit short in the same bracket. Other than this, majority number of AAP candidates fall in the 30 lakh or below assets segment. 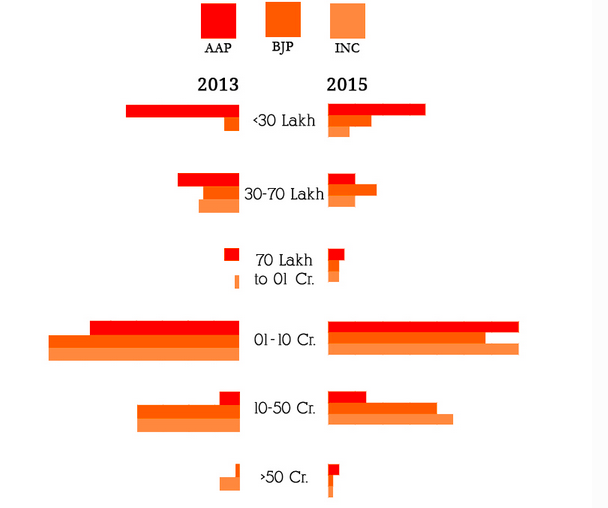 In all its spirit AAP reflects the changing dynamics of Indian politics but on women participation it seems stagnant just like its contemporaries. AAP had only 6 women candidates, while BJP had 7 and INC had 5.

The point to note here is that quite against increasing number of women participation in other states, Delhi is not at all gaining in this regard. This situation attracts more concern when the crime rate against women in Delhi is at an all time high.

In contrast to Delhi’s youngest elected assembly, the 2014 16th Lok Sabha was the oldest Lok sabha elected in India. The new parliament elected last year had 53 percent members under 55 years. Therefore, a nation which has 50 percent of the population under the age of 25 elected the oldest Lok Sabha ever in 2014 and youngest legislative assembly for its capital in 2015. PRS legislative Research (PRS) analysis on productivity and parliamentary performance by age group, on the other hand have shown that there is no difference between younger and older Member Of Parliament in productivity.