How Good Is Your Eyesight? The Answer Depends On What You See In This Image

Whom do you see-

NEW DELHI: ‘Nothing is as it seems,’ and believe it or not, that’s a good thing. With your brain being flooded with information, an evolutionary asset is its ability to focus in on the information that matters. Psychologists and scientists refer to this phenomenon as ‘inattentional blindness’ -- a lack of attention that is not associated with vision defects or deficits.

Stare at the image above. Look closely and tell us what you see. Do you see acclaimed scientist Albert Einstein or do you see film star Marilyn Monroe? Keep the image steady and walk a few steps back. Keep walking. Pause. What do you see? If you’re seeing Einstein, you have good eyesight. If you start seeing Monroe, time to get a pair of glasses. Even if you have perfect vision, making the image smaller -- by either fiddling with the zoom button or walking back far enough -- will have you seeing Monroe as if Einstein was never there. The further you have to go back to see Monroe, or the smaller you have to make the image to see Monroe, the better your eyesight.

Let this video explain what is happening here:

Stumped? Well we have more tricks up our sleeves.

Of course, you know THE DRESS. Whether it looks white and gold or blue and black depends on how your eyes have evolved, which determines which colours it sees. In this particular image, the dress -- which is actually blue and black -- appears white and gold to some because the light being reflected off the dress tricks some people’s eyes into adjusting for colour. For a detailed explanation see here. 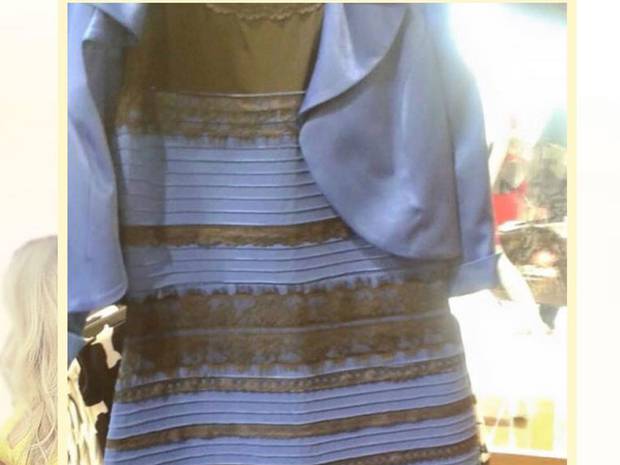 Go ahead and see if you can keep track of the players in white passing the ball.

Did you count 15 times? And did you see the ----? Chances are you did not. Your brain zeroed in on the relevant information -- the players wearing white -- making you oblivious to that all too apparent image.

The researchers followed up the video with ‘Monkey Business.’ The instructions are the same -- ‘count how many times the players wearing white pass the ball.’

This time, we bet you saw the image. That’s because your brain, now aware that you were previously tricked, was looking out for it. But wait -- did you notice the other details changing, like the ---?

Tricked you again, didn’t we? In fact, the human brain is actually quite inept at noticing big changes, a phenomenon that psychologist and scientists refer to as ‘change blindness.’

Surprised at how obvious the changes were? Try it again, with this video by the Gorilla-famous Daniel Simons.

Here’s another video by Simons. This time it’s silent so that all the talking doesn’t distract you from the visual details.

This ‘change blindness’ is not limited to videos; you experience it in everyday life. Watch this:

Tricked you again, didn’t we?