True Or False: How Many Of These Common Misconceptions Do You Think Are True?

NEW DELHI: If you’re reading this and are familiar with Ripley’s “Believe It Or Not” then you already know that the show is famous for introducing you to obscure facts that seem so unusual that you can’t help but question the claims.

Well, the fine folk at the franchise have done a reverse, where they’ve put together fifty misconceptions -- things that people think are true but are in fact indeed hogwash. A spokesperson was quoted by the Daily Mail saying: 'If you're told something enough times, you're sure to start believing it. The misconceptions in this list are all pretty plausible… Unbelievably, all of these commonly believed facts are in fact common misconceptions that we have myths and misconceptions.”

The list includes things like Mount Everest being the tallest mountain in the world (not true), that the earth revolves around the sun (not exactly true), bats are blind (not true), handling a baby bird will make its mother reject it (not true, at all -- give that baby back to its mamma), bulls don’t like the colour red (not true), and so on and so forth.

So take our challenge. Tell us in the comments below how many of the following misconceptions you believed (till now) to be true.

1. Coffee is made from beans

While it is widely believed that coffee comes from 'coffee beans', experts say it is actually made from a seed which is called a bean.

Believe it or not, chameleons actually change colour as a response to mood, temperature, communication and light instead of the object they are touching.

3. Mount Everest is the 'tallest' mountain in the world

4. The Great Wall of China can be seen from space

The Apollo astronauts confirmed that you can't see the Great Wall of China from the Moon. In fact, all you can see from the Moon is the white and blue marble of Earth.

5. One human year is equivalent to seven dog years

While true in some cases, it does not apply to everyone because it very much depends on the size and breed of the dog. 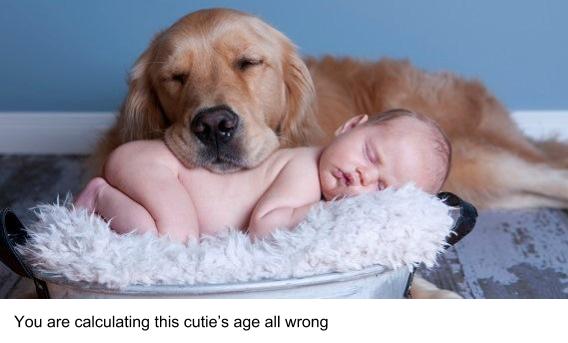 6. You lose your body heat fastest through your head

7. The Earth revolves around the Sun

Technically, the Earth, sun and all of the other the planets are orbiting around the centre of mass of the solar system, not specifically the sun.

This was scientifically disproven by research which found that all taste sensations come from all regions of the tongue, although different parts are more sensitive to certain tastes which may be where the popular saying comes from.

9. Peanuts are a type of nut

Unbelievably, peanuts, along with beans and peas, actually belong to the single plant family, Leguminosae.

While some experts do stand by this common belief, other professors claim that the majority of scientific research has concluded that sugar does not cause hyperactivity in youngsters.

This is correct, although in actual fact there are at least nine senses and most researchers think there are more like 21. The five main senses - sight, sound, touch, smell and taste - are the ones referred to in this popular saying.

Fortune cookies were originally the invention of Japanese-Americans before being widely adopted by Chinese culture.

While this may well be true, experts say there is actually no evidence to suggest that Vikings ever wore horned helmets.

15. The forbidden fruit mentioned in the Book of Genesis is an apple

The bible never mentions the forbidden fruit was an apple.

16. Vitamin C is an effective treatment for a cold

Flu-sufferers are often encouraged to increase their dosage of Vitamin C, but most experts have stated that there is little or no evidence that the vitamin can help treatment of a cold. Instead of effectively treating a cold, it is thought to help build up the immune system to ward of potential flu viruses.

Penguins are mostly monogamous, but there are some species such as the Emperor Penguin which are serially monogamous. They mate with one couple for the whole season but will probably mate with another penguin the following year as the urgent need for breeding will make them avoid waiting for the same couple. 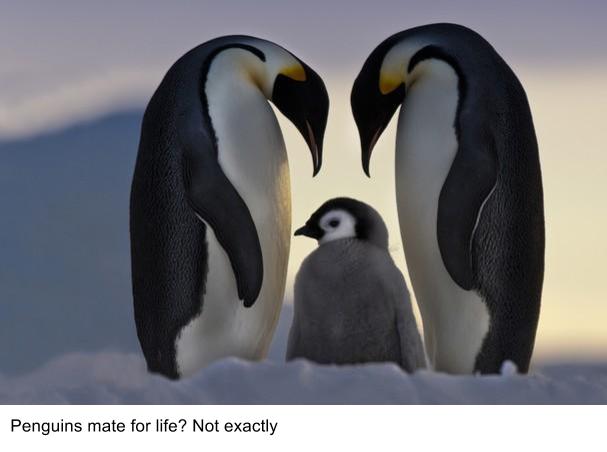 While caffeinated drinks may have a mild diuretic effect - meaning that they may cause the need to urinate - some experts believe they don't appear to increase the risk of dehydration.

19. When in London, you are merely six feet away from a rat

This could well be true but hasn't been proven and is just a rough estimate as rodents are not evenly spread apart.

As the Moon is constantly rotating on its own axis, there is no area of the planetoid which is in permanent darkness.

21. A toilet's flush will change direction depending upon which hemisphere it is in

The real cause of 'backwards'-flushing toilets is just that the water jets point in the opposite direction.

The red colour we see in images of Mars is just the result of iron rusting.

23. Sunflowers track the sun across the sky

A common misconception is that sunflower heads track the sun across the sky when in full bloom. The uniform alignment of the flowers does result from heliotropism in an earlier development stage, the bud stage, before the appearance of flower heads so technically they follow the sun before they have bloomed, not after. 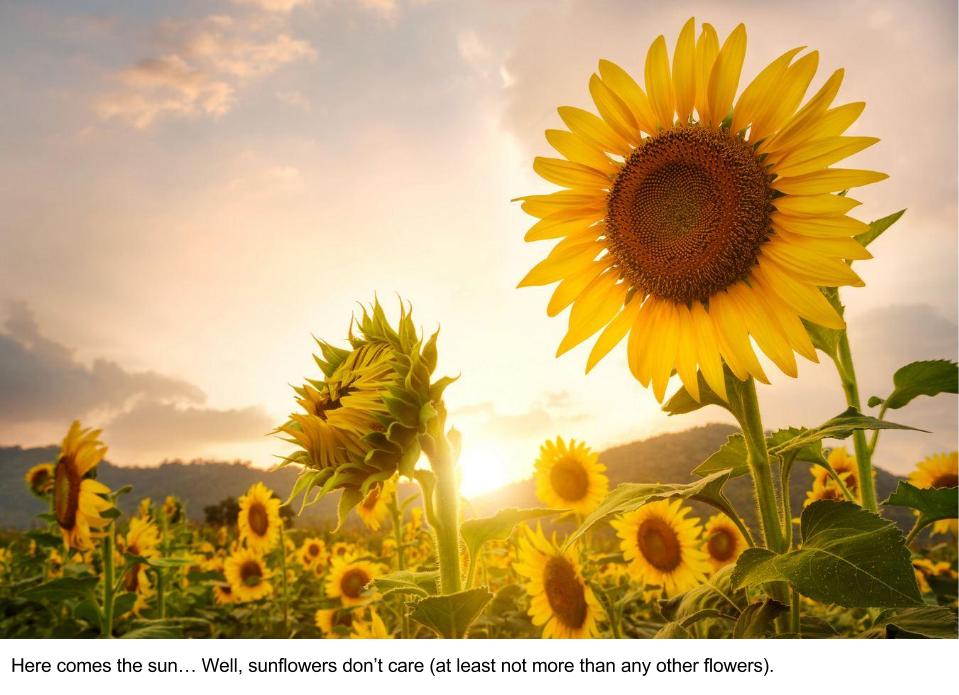 Neurologists describe the myth as false and state we use virtually every part of the brain, and that (most of) the brain is active almost all the time.

25. Your fingernails continue to grow after you die

The dehydration of the body after death can cause retraction of the skin around hair and nails, giving the illusion that they have grown. However, all tissues require energy to sustain their functions, and no such thing is possible once the mechanism that promotes normal growth shuts down at death.

Despite the tiny eyes and nocturnal lifestyle, none of the roughly 1,100 bat species are blind.

27. Dropping a penny from the Empire State building would kill someone

A penny only weighs about a gram and it tumbles as it falls. Because of the tumbling and the light weight, there's so much air resistance that the penny never really gathers that much speed before it hits its terminal velocity. A gram of weight travelling at a relatively slow speed might hurt a little if it hit you on the head, but it's not going to kill you.

28. Handling a baby bird will make its mother reject it

Most birds have a very poor sense of smell, so in most cases are unable to even notice human scent on baby bird.

29. You need to wait 24 hours before reporting a missing person to the police

There is no rule that states you have to wait 24 hours before reporting a missing person. The person will be recorded as missing and their details made available to other UK police forces within 48 hours.

30. Your blood is blue before its oxygenated

While many believe that de-oxygenated blood is blue, it is actually a myth because human blood is always red - although the level of redness does differ depending on how oxygenated it is.

31. A goldfish has a memory span of three seconds

This is not true as goldfish do actually have very good memories for fish. They can be trained to respond various ways to certain colours of light, different kinds of music and other sensory cues. 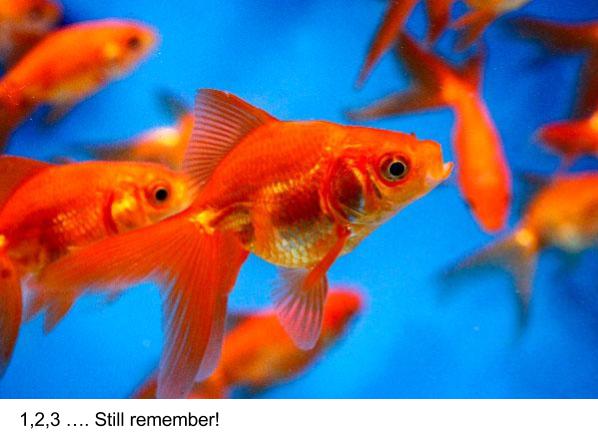 32. You need to wait an hour after eating before you can swim safely

As with any exercise after eating, swimming right after a big meal might be uncomfortable, but it won't cause you to drown. However, it is good advice to stay out of the pool right after a big meal as the digestive process does divert the circulation of the blood towards the gut and to a certain extent, away from the muscles, meaning swimming could feel harder.

33. Bulls are enraged by the colour red

It is a proven fact that bulls only see blues and yellow. They only react to the red cape because of the movements that flutter around.

34. Seasons are caused by the Earth being closer to the Sun

As Earth orbits the sun, its tilted axis always points in the same direction. So, throughout the year, different parts of Earth get the sun's direct rays.

35. Eating lots of chocolate will give you spots

There is no concrete evidence that suggests eating more chocolate can cause spots.

36. Shaving your leg hair will make it grow back quicker

Many believe shaving body hair makes it grow back quicker but shaving hair doesn't change its thickness, colour or rate of growth. Shaving facial or body hair simply gives the hair a blunt tip which might feel coarse or 'stubbly' for a period of time as it grows out.

37. Frankenstein was the name of the monster in Mary Shelley's book

Frankenstein was the name of the monster's creator.

38. Microwave radiation can cause cancer

Most experts say that microwave ovens don't give off enough energy to damage the genetic material (DNA) in cells so they can't cause cancer.

While some men might think about sex this often, there is no real evidence to support this statement.

40. Ostriches bury their head in the sand when they are scared

Ostriches swallow sand and pebbles to help grind up food in their stomachs. This means they have to bend down and briefly stick their heads in the earth to collect the pebbles. It is not because they are scared. 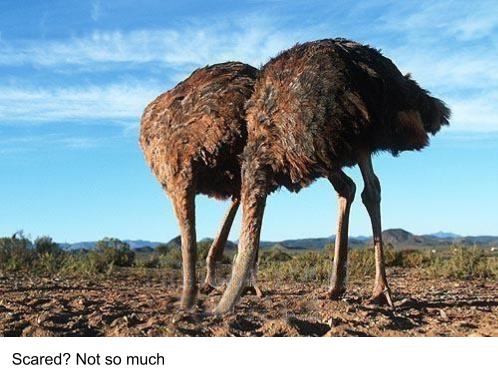 Waking a sleepwalker won't cause them any physical harm but but could leave them startled or disoriented which is why many people believe it is best not to disturb them.

He failed one entry exam to a school but in fact, he actually excelled at mathematics throughout his schooling and even considered becoming a mathematician for a time.

The salt water requires more exposure to the heat in order to boil than water alone, so the boiling point is elevated and the time it takes to get the water to boil increases.

44. Carrots help you see in the dark

Carrots contain vitamin A, or retinol, and this is required for your body to synthesise rhodopsin, which is the pigment in your eyes that operates in low-light conditions. If you have a vitamin A deficiency, you will develop nyctalopia or night blindness. Eating carrots would correct this and improve your night vision, but only to the point of an ordinary healthy person - it won't ever let you see in complete darkness.

45. Houseflies only live for around 24hours

The adult housefly can live up to one month in the wild.

46. Eating cheese before bed will give you nightmares

Cheese is believed to give you more emotionally charged dreams but not necessarily nightmares.

47. The capital of Australia is Sydney

The capital of Australia is, in fact, Canberra.

48. Tomatoes are a vegetable

Tomatoes are a fruit

49. Going out in the cold with wet hair will make you ill

There is no evidence to support this, it is regarded as an old wives' tale.

Alcohol may make your skin feel warm, but this apparent heatwave is deceptive. A nip or two actually causes your blood vessels to dilate, moving warm blood closer to the surface of your skin, making you feel warmer temporarily. At the same time, however, those same veins pumping blood closer to the skin's surface causing you to lose core body heat.