Murders of Gays Raise the Question of Hate Crimes in Cuba

'Homosexuality Isn't a Danger; Homophobia Is'

HAVANA (IPS): During the events surrounding the eighth annual celebration of the Day Against Homophobia in Cuba, it emerged that a young transsexual had recently been killed in the city of Pinar del Río near the western tip of this Caribbean island nation.

While efforts to combat discrimination against lesbians, gays, bisexuals and transsexuals (LGBT) are stepped up in Cuba, this segment of the population remains vulnerable to harassment and violence – and even death.

The Apr. 26 murder of Yosvani Muñoz, 24, which is under investigation, as the legal advice office of the National Centre for Sex Education (CENESEX) confirmed to IPS, raised questions about a sensitive and little-known issue in Cuba: hate crimes.

IPS asked experts and members of the LBGT community about the causes of killings of “men who have sex with men” (MSM), of which no official statistics have been published, but which have been reported periodically since 2013 by word of mouth, or in blogs or alternative media outlets.

“We are fighting hate crimes together with the Interior Ministry (which the police answers to),” CENESEX director Mariela Castro said in exclusive comments to IPS. Castro is the most visible face of the national campaign in favour of freedom from discrimination based on sexual orientation and gender identity.

“A thorough expert analysis is needed to determine what kind of killing it was because not all crimes involving LGBT persons as victims are motivated by hatred,” Castro, a sexologist, explained during the May 5-16 events surrounding the Day Against Homophobia. 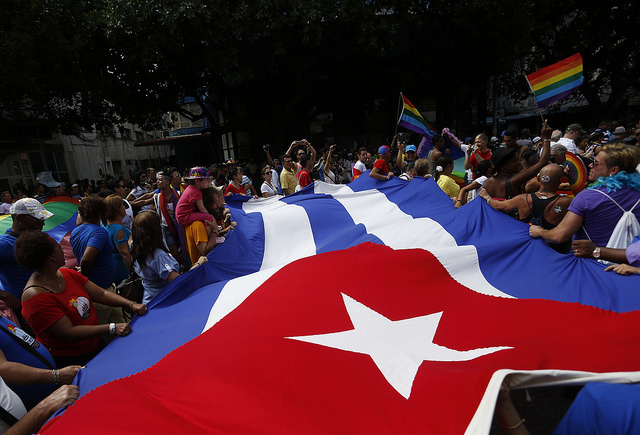 (With a big Cuban flag and smaller rainbow flags representing gay pride, LGBT persons participate in one of the events in Havana surrounding the eighth annual celebration of the Day Against Homophobia in Cuba. Credit: Jorge Luis Baños/IPS)

In Havana and the eastern province of Las Tunas, this year’s activities, focused on the right to work, had the support for the first time of Cuba’s trade union federation Central de Trabajadores de Cuba and the blessing of protestant pastors for more than 30 gay and lesbian couples.

The activities involved a festive conga line and demonstration with signs and banners, video clips, and debates on the rights of LGBT persons to information, freedom of thought, access to justice, personal safety, and violence-free lives.

They preceded the International Day Against Homophobia and Transphobia, which is observed on May 17 because on that date in 1990, the World Health Organisation (WHO) general assembly removed homosexuality from the global body’s list of mental disorders.

Castro said “theft and common crime are more frequent aspects in murders of homosexuals, according to the data presented to us by the DGICO (criminal investigation bureau),” which receives advice from and collaborates with CENESEX.

“There might be a hate crime murder once in a while, but they are very few,” she said.

The sexologist added, however, that “the number of hate crimes is not completely clear because of the lack of a specialised institution dedicated to classifying them….and this classification is important because the old term ‘crime of passion’ hides gender violence, violence between men, and violence between couples.”

Violent crime is generally surrounded by silence in this island nation of 11.2 million people, and killings of LGBT individuals are no exception. The 1987 penal code does not specifically recognise hate crimes, or sexual orientation and gender identity as aggravating circumstances in murders.

The law provides for sentences of 15 to 30 years in cases of homicide, and the death penalty is still on the books, although it has not been applied since 2003.

“MSM are at greater risk of being killed than women,” Castro said, citing the results of DGICO investigations regarding a category of men that includes gays, bisexuals and transsexuals.

“Part of the gay population does not perceive the danger when they irresponsibly choose sexual partners, without information,” she said. “They seek out young men who work as prostitutes, some of whom are criminals and try to rob them, and even kill when they defend themselves.”

Along with its work raising awareness to prevent HIV/AIDS, CENESEX warns of other risks posed by irresponsible sexual practices in gay meeting and recreational places or community social networks.

Oneida Paz, a 59-year-old manager, has not heard of murders or rapes of lesbians, a population group she belongs to. “Violence among women can exist, but it’s not common,” she said. “I do have friends who have been injured, because they were married to men who beat them when they got into a relationship with another woman.”

CENESEX said the number of murders of MSM in 2013 and 2014 was high. At that time the issue came to the forefront because of the deaths of two high-profile openly gay cultural figures, who died in strange circumstances, according to activists.

The local media, which is entirely state-owned, gave ample coverage to the violent deaths of choreographer Alfredo Velázquez, 44, in September 2013 in the eastern city of Guantánamo, and theatre director Tony Díaz, 69, found dead in his Havana home in January 2014. But they only mentioned their careers in the arts.

“I haven’t seen statistics and I’m no expert, but the murders I know about were ruthless. We’re killed for some reason, like theft or vengeance, but also because we’re gay,” said Leonel Bárzaga, a 33-year-old chemical engineer who told IPS about the murder of his friend Marcel Rodríguez.

Rodríguez, a 28-year-old gay professional, was stabbed 12 times on Jan. 6 in his central Havana home. “The police haven’t shared the results of their investigation yet,” said Bárzaga, who preferred not to discuss the specific motives for the murder.

Veterinarian Manuel Hernández, 41, said “I haven’t heard of murders of gays. But verbal attacks are definitely common in small towns, and in the workplace there’s a lot of discrimination,” above all in the rural town where he lives, Quivicán, 45 km south of Havana.

“It wouldn’t be crazy to talk about ‘hate crimes’ against LGBT persons in Cuba,” said Jorge Carrasco, a journalist who investigated gay gathering places in the capital in 2013. “That’s a term used by the Cuban police, in fact, and it’s not a product of paranoia. But I know as little about them as any other Cuban.”

Based on his interviews conducted in lonely outlying parts of the city, like the Playa del Chivo, a beach frequented by MSM to talk, arrange meetings and have sex with strangers, Carrasco explained by email that “many criminals go to those places to steal, and there have been murders. That’s why the police patrol them.”