NEW DELHI: Vivekananda School Journalism and Mass Communication, Vivekananda Institute of Professional Studies, Pitampura, is hosting its annual media festival Spandan on November 5,6 and 7, 2015. This year Spandan aims to be bigger and better, and has come up with a plethora of events which are an amalgamation of culture and media.

Over 300 students from the institute participated in an on-ground promotional activity. The students organized a choreographed dance performance combined with an impromptu routine at Connaught Place, New Delhi, at 7:30 am on Sunday, November 1, 2015. The dance routine was based on the festival anthem, ‘Yeh Spandan hai humara’, composed and performed by students. The enthusiasm of the students coupled with the happy milieu of the early winter morning encouraged spectators to join the students in their foot-stamping performance.

People from different generations showed interest in the festival. Mrs Vishalakshi, 60, was eager to know more about Dastangoi, a folk story-telling tradition. Spandan 2015 aims to promote cultural understanding and appreciation by hosting events, both competitive and non-competitive, which give a glimpse into India’s rich cultural fabric.

Spandan is the annual mega media festival organised by the Journalism and Mass Communication department of Vivekananda Institute of Professional Studies. Since its inception in 2003, it has grown into one of the most awaited festival of GGSIP University. 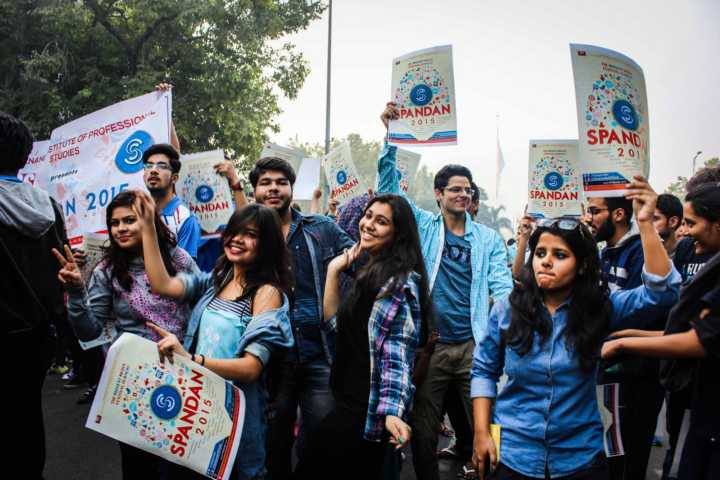 Devoted to forming a multi-dimensional learning environment for media students and professionals, Spandan brings to the youth of Delhi a platform to showcase their capabilities in the fields of news reporting, photography, debates, film-making, radio jockeying, advertising and other areas of mass communication. Spandan aims to create interest and awareness among today’s generation about the working of media and its importance. While the prime focus remains on formal media discussions and related competitive events, the festival also incorporates the beautiful hues of cultural events revolving around dance, music, band performances, street plays, fashion shows and artist nights among others.

True to its name, Spandan becomes the heartbeat of everyone who enters its realms for the three days of its annual existence. The events galore caters to various creative and intellectual interests and talents with events like Media Panchayat, Ad Mad, Anchor Hunt, Quiz, Debate, RJ Hunt, Group Dance, Fashion Show, Photography Competition, Street Dance and X Factor.

Spandan 2015 will also host the second edition of Cinéphile, its annual international film festival. With 1000+ participants and 100+ colleges, Spandan 2015 promises to be a media spectacle. 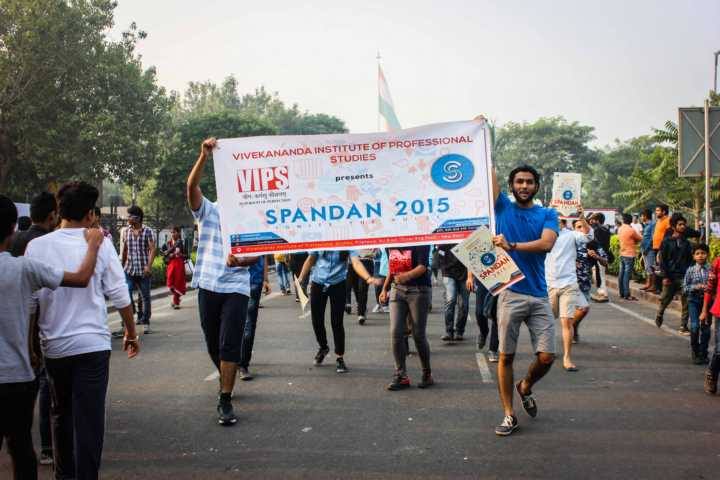 Founded by the Strength India Educational Society at the year (2000), Vivekananda Institute of Professional Studies (VIPS) was an act of initiation towards building Centres of Excellence at par with the finest of the institutions.

It was a humble beginning but VIPS in its determination to bringing quality education to our society stood firm throughout its 15 year journey, with the first courses offered in Bachelor of Information Sciences (BIS Hons.) and an integrated five-year course in law (LLB Hons.) (LLB Hons.) in affiliation with GGSIPU.

In the year (2002), the institute’s effort towards bringing quality education was appreciated by the university, as VIPS was granted an additional academic programme in the form of Bachelors of Journalism and Mass Communication (BJMC). Since then, VIPS has grown with each year, today its home to four constituent schools running nine professional courses and accommodating over 3000 students.

The ISO 9001:2008 certification is a testimony to the novel learning processes developed by the institute to groom leaders of tomorrow. Because of this unwavering commitment to creating world-class Temples of Knowledge, the visiting dignitaries have paid rich tributes to the efforts of the Board of Management at VIPS.

Use the hashtag #TheCitizenAtSpandan to get noticed!