CHENNAI: The evenings at Chengan Street in Mettupalayam slum near Perambur are reflective of those at a typical slum in more ways than one– women cooking on ‘Viragu aduppu’(wood-fire open stoves) outside dilapidated houses with fading yellow, pink or green walls, or people sitting in groups chattering and whiling away their time.

But of late, the evenings at this 4-feet narrow street makes it stand apart from other prosaic slums. The children can be seen joyously playing or attentively learning to play various games- badminton, chess, carom, football and volleyball.

‘Play, then read’, an initiative by ‘Nidharsanam Public Charitable Trust’, encourages children to play sports from 4p.m -5:30 p.m, with a broader perspective in mind.

“With the help of this project, we wish to prevent kids from falling prey to bad habits, which is very common among children living in such surroundings”, said Sai Krishnan, the founder and Managing Trustee of the NGO. He added, ” After playing, the kids have free tuition classes from 6 p.m -8:30 p.m”.

Those children who don’t study after playing are not allowed to play the next day. And Mahalaxmi,a resident of the street and a volunteer with the NGO, ensures that the children attend the classes after playing. 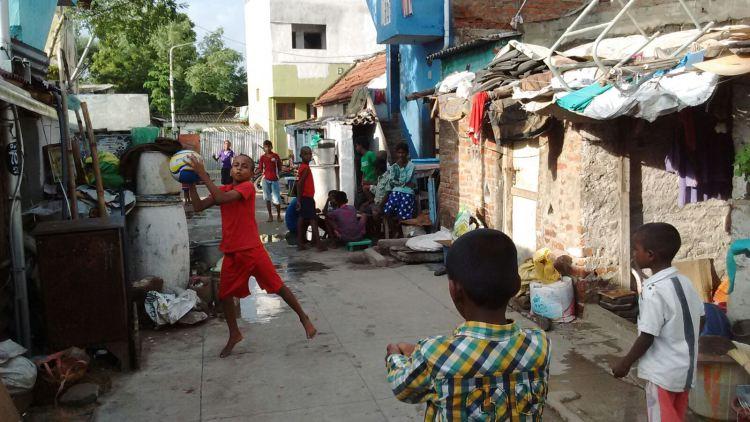 The idea of ‘Play, then read’ stemmed from Krishnan’s own experience in his childhood. “The kids here reminded me of my own childhood and I thought it’s important to show them the right way. Had somebody shown me the way, I would have probably studied more,” Krishnan said.

Krishnan shared the project idea with a group of friends, all alumni of Anna University. They then provided sports equipment worth Rs 10,000 for the project.

Nidharsanam Trust, established in 2013, gets its funding from people voluntarily contributing and Krishnan is keen on keeping it this way. When it was founded, he was the only one contributing towards it. Initially, he sold his mothers’ jewellery, and catered at restaurants to fund the Trust. But with the passing years, more volunteers have joined and have started contributing.

The ‘Play, then read’ initiative was started on October 2 and has been appreciated by children as well as their parents.

“I love playing new games. I am learning badminton presently”, said A. Lalitha, a Class 6 student.

For her and many of the girls in the street, evenings mean a pleasant break from the daily household work. 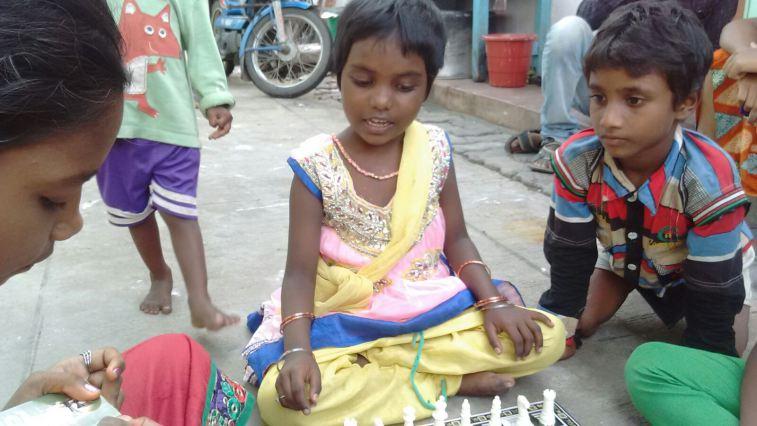 The parents, on the other hand, now at least know where their children are.

Latha is happy that her daughter plays in front of her eyes. “All the kids play in the street itself, or the nearby ground. I don’t have to be constantly worried about what my daughter would be doing,” she explained.

Only 20 days into the project, Sai Krishnan is sure it will be a huge success. “I knew I was on the right track when just a few days after ‘Play, then read’ had started, a 20-year-old boy came up to me and asked why I didn’t start such a project 5-6 years back.”

A Class 9 dropout himself, Krishnan, soon realized the importance of education and has been teaching children in his slum since 2013. The Nidharsanam Trust was founded with the objective of “providing every child what I personally missed in my childhood’.

An expert in current affairs, Krishnan’s tryst with tutoring began when he thought of providing free coaching for the Tamil Nadu Public Service Commission (TNPSC) Group IV exams, for which few people volunteered to teach.

“A total of 98 students were enrolled in the first batch. Those studying in Presidency College came and taught the students here”, he recalled.

And then, tuitions for 10th and 12th standard began, with classes been conducted on different terraces in the neighborhood each day. The Nidharsanam Trust now conducts tuitions from 1st standard onwards, in the evening, in the nearby Chennai Corporation School and has as many as 200 students. 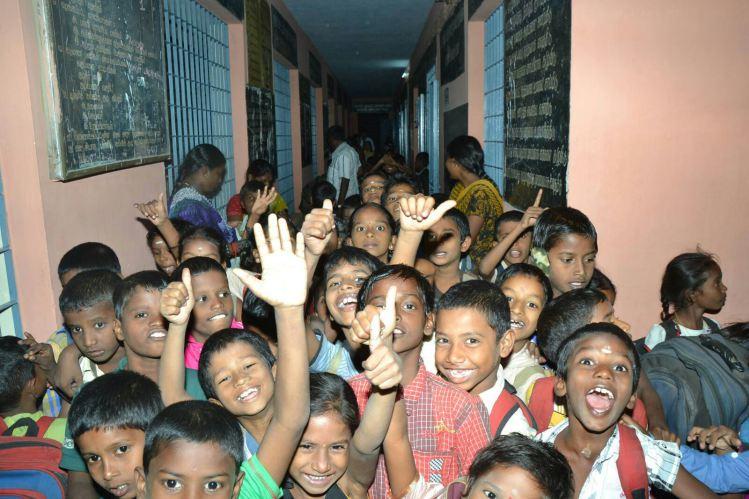 Interestingly, these free tuition classes are not only attended by children of the different streets of the slum but also by students from nearby areas of Perambur, Otteri, etc.

Further, the number of teachers in the evening classes has increased to 11, two of whom are Krishnan and his sister-in law Saranya.

Moreover, the NGO is also planning to start computer classes too.

One of the volunteers of the NGO and a member of an independent club ‘The Film Tribe’, Aadhityan Ramesh, added if any student would want to pursue a sport further, the NGO would help him/her. “We would make all efforts to ensure that if some students want to take up a sport professionally, we will help them finding the right place,” Ramesh said.

Surprisingly, the initiative, still in its nascent stage, is proving to be a success already.

“Among the 80 students who are there on this Chengan street, 20 more students have joined the tuitions in the evening”, a proud Krishnan said. “If we cover all the 14 streets in the Mettupalayam slum, and even if 20 from each street join, we will have 280 more students willing to study. And the marks the kids would get in the school with the help of these tuitions, would speak volumes about its success”.

The efficacy of the project could also be seen from the smile on Latha’s face.

“My daughter Revati scored 40 on 40 in the school test”, 35-year-old Latha happily exclaimed.