The BJP Is Not Happy With Aamir Khan's Comments On Intolerance In India (Is That Surprising?)

Aamir Khan has hit out against intolerance in India. Not everyone is happy

NEW DELHI: Bollywood star Aamir Khan joined the rising chorus of protest against intolerance in India, saying that his filmmaker wife Kiran Rao had even suggested leaving the country. Khan was speaking at a journalism awards ceremony, where he added that he was “alarmed” at the rise in acts of intolerance in the "last six to eight months" in India. Khan’s statements were met with a flurry of criticism, with the government predictably linking the sentiment as something that was an insult” to India.

"We won't let Aamir leave the country, he is safe. This kind of comment influenced by a politically motivated campaign insults those who have given so much honour to Aamir in India," said Mukhtar Abbas Naqvi, the Minister of State for Minority Affairs (as quoted in NDTV).

Fellow Bollywood actor Anupam Kher, whose wife is linked to the BJP, joined the criticism against Khan in a series of Tweets that have since sent Anupam Kher’s name trending on social media. 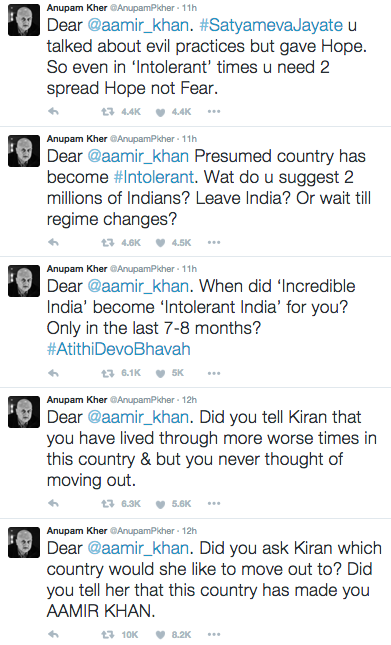 Earlier in the month, another bollywood stalwart, Shahrukh Khan had hit out against intolerance in India. Khan had said on his 50th birthday, "Religious intolerance, or intolerance of any kind, is the worst thing and will take us to the dark ages."

The two Khan’s have joined the filmmakers, writers, scientists, artists and others who have returned awards in protest after the Dadri lynching provoked by falsehoods of beef eating and cow slaughter, and the assassination of rationalists and scholars.

Just as Aamir Khan’s comments provoked angry criticism, so did Shahrukh’s with any comments in protest of the atmosphere of intolerance being linked to being against India in some form or the other. While Aamir was told that his fans in India would be disappointed, Shahrukh was hit with a harder “go to Pakistan” comment. BJP general secretary and a former Minister Kailash Vijayvargiya had directed him, as is the BJP wont, to go to Pakistan as “his heart lies there.” He had tweeted, “"Shah Rukh Khan lives in India, but his heart is in Pakistan. His films make crores here but he finds India intolerant."

The strong criticism of this comment from all political directions had Vijayvargiya retracting the tweet with, "I did not intent to hurt anyone. I take back my tweets." He further added for the course, that, "Shah Rukh wouldn't have been the most popular actor after Amitabh (Bachchan) had India been intolerant. My tweets were misunderstood by some." BJP ministers like Prakash Javadekar condemned his colleagues comments, although this is just part of the party’s continuous litany against dissenters.

Go to Pakistan” has increased in decibels since the BJP government came to power at the centre with this becoming a refrain of sorts. The difference is that from being focused on the minorities this has been extended to include all dissenters including the writers, filmmakers, scientists and others who have come out in strong protest against the government and the Hindutva affiliates for fanning divisiveness and hate in the country.

Vishwa Hindu Parishad’s Sadhvi Prachi for instance followed the BJP general secretary to attack Khan as a “Pakistani agent”. And went on to say, "Shah Rukh Khan is an agent of neighbouring country Pakistan as he reflects their (Pakistan's) ideology. Such a man should go to Pakistan." Filmmaker Aparna Sen was amongst those to condemn Prachi and issued an appeal for a joint representation to President Pranab Mukherjee to protest against this. “Can't believe Sadhvi's reaction to SRK on tv! They're ones who want to break the country apart! There should be legal action against her!" Sen tweeted.

The extreme right wing groups in India have always linked Pakistan to terrorism and both to the Indian minorities. During the 2014 Lok Sabha campaign the minorities were told over and over again to go to Pakistan if they did not want to vote for Narendra Modi. BJP’s Giriraj Singh for instance went a step further to threaten, "those who did not vote for Narendra Modi should be sent to Pakistan". The Election Commission at the time intervened to stop him from campaigning in Jharkhand but after the elections, he was included in the Council of Ministers at the centre by a grateful Prime Minister.

In the Bihar elections both Chief Minister Nitish Kumar and RJD chief Lalu Yadav were repeatedly told by BJP leaders to “go to Pakistan.” BJP MP Ashwani Kumar Choubey was strident, The Election Commission had banned Giriraj from campaigning in Bihar and Jharkhand but he won the election from Nawada and was rewarded with a berth in the Union ministry, "Lalu and Nitish Kumar should go to Pakistan after Bihar assembly polls outcome on November 8.” The same Giriraj Singh, as a Union Minister, claimed attacked the two leaders of the grand alliance with, "Jinnah's jinn (ghost) has entered in Nitish Kumar and Lalu Prasad and they want to make Bihar a Pakistan.

BJP president Amit Shah made the same linkages when he said that after if the grand alliance won the Bihar polls “crackers will be burst in Pakistan.” He asked a rally, "Do you want the return of Jungle Raaj-2? If by any mistake BJP loses, victory and defeat may be in Bihar but fire crackers will go off in Pakistan. Do you want crackers being burst in Pakistan?" He also invoked the name of a Muslim to claim that “gangsters” like Mohammad Shahabuddin would criminaShah also said if the grand alliance of JD(U), RJD and Congress win, then "gangsters" like Mohammad Shahabuddin, a RJD leader presently lodged in jail, will celebrate.

Advocating a ban on cow slaughter, Union Minister for Parliamentary Affairs Mukhtar Abbas Naqvi said that all those who wanted to eat beef could go to Pakistan.“Those who are dying without eating beef can go to Pakistan or Arab countries or any other part of [the] world where it is available," the BJP Minister said.

The public intellectuals who have taken a position against the RSS/BJP and the affiliates for seeking to divide India are all now under attack for being “agents” of Pakistan. The social media has been flooded by the Hindutva trolls questioning their ‘patriotism’, ‘nationalism’ and insisting that they are working for Pakistan. Words like ‘sedition’, ‘anti-nationals’, ‘traitors’ are being used freely while the government watches in silence and Ministers join the cacophony with impunity.