2015: The Things Our Politicians Said

NEW DELHI: Like every year, 2015 had its list of quotable quotes. Unfortunately, in Indian politics that term usually has sexist, racist and offensive connotations. This year saw BJP MP Sakshi Maharaj demanding that Hindu women produce at least four children to save the Hindu religion; BJP leader Kiran Bedi saying rapists were like pigeons acting on their animal instincts; right wing group Sanatan Sanstha warning men against growing their hair lest it affect their sperm count; India’s culture minister Mahesh Sharma defending saffronisation and saying that whilst the Ramayana and Gita are central to the soul of India, the Bible and Quran are not; Haryana CM Manohar Lal Khattar demanding that Muslims give up eating beef; JD(U) leader Sharad Yadav praising South Indian women’s bodies; Karnataka minister KJ George saying that a rape involving two men cannot be called a gang rape… the list goes on.

Here’s a look at some of the statements by India’s political elite in 2015. 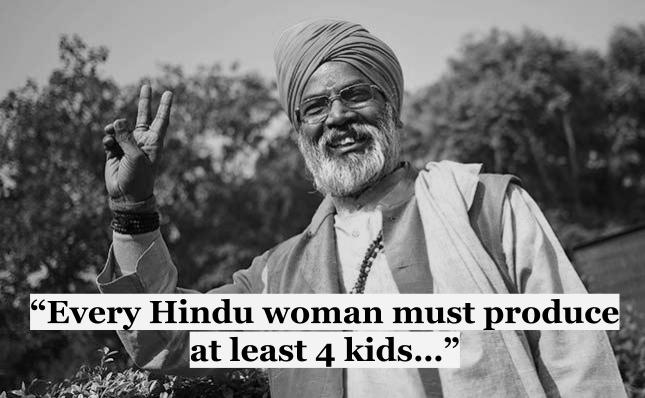 Unnao MP Sakshi Maharaj said at a rally in Meerut in January, "The concept of four wives and 40 children will not work in India and the time has come when a Hindu woman must produce at least four children in order to protect Hindu religion." Maharaj then added that those involved in conversion must be punished with death, albeit clarified that 'ghar wapsi' (reconversion) is not equivalent to conversion. "Wait for some time," Maharaj said, "a law will be passed in Parliament in which anyone indulging in cow slaughter and conversion will be punished with the death sentence." 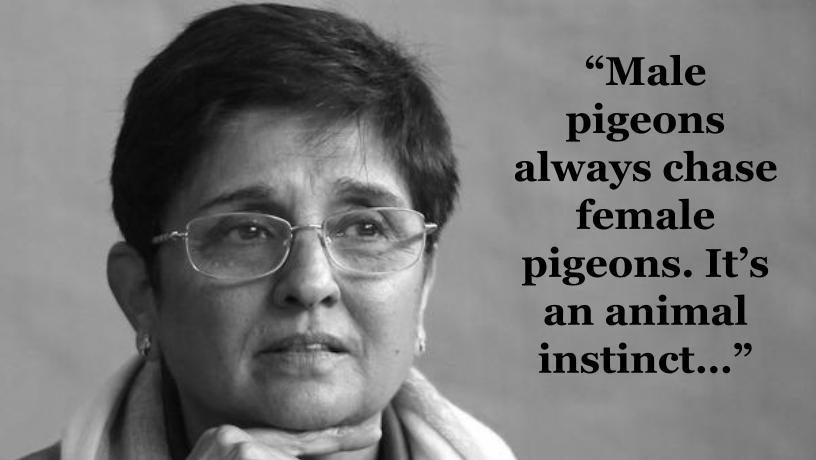 In March, BJP leader and former IPS officer Kiran Bedi compared rapists’ ‘instincts’ to pigeons. Trying to explain why rapes happen, Bedi said: “If you closely watch animals, I’m a bird watcher. I’ve seen a male bird exactly doing to a female bird what this man did. It’s an animal instinct. I feed pigeons outside my home. I’ve seen every time a male pigeon following a female pigeon only for biological reason and he edges around. I analysed it. It’s an animal instinct. What is being altered today is an animal instinct mindset. That is by civilised behaviour, by education, by better nurturance. Nature is one thing nurturance is the other thing… this man never went through nurturance.” 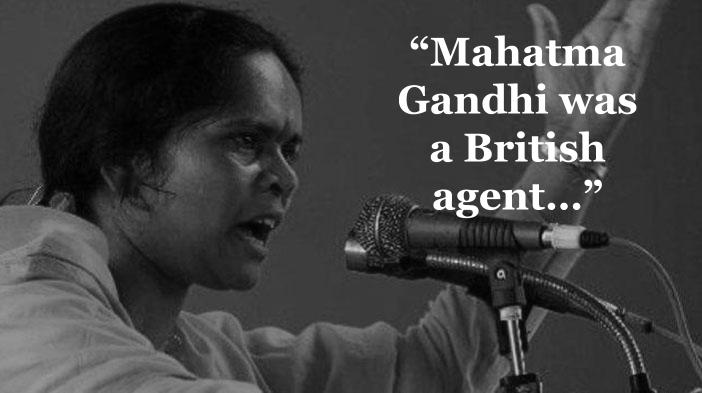 Also in March, VHP leader Sadhvi Prachi courted controversy for calling Mahatma Gandhi a British Agent. "It was only due to sole effort of Bhagat Singh, Chandra Shekhar Azad, Ram Prashad Bismil and Subhash Chandra Bose that India was freed from the clutches of Britishers," Prachi said, adding that “"Gandhian ways of protests and hunger strikes were worthless in achieving freedom.”

In August, Prachi was again in the headlines for claiming that there were one or two terrorists in Parliament. "It is a big misfortune that in the Indian Parliament, we have one-two terrorists sitting there. I do not think there can be a bigger misfortune for India than this as they who, are disobeying the judgement of a court, because the court has proved that he(Yakub) is a terrorist. When the court has already proved so, those supporting the terrorist are terrorists themselves I believe," she said. 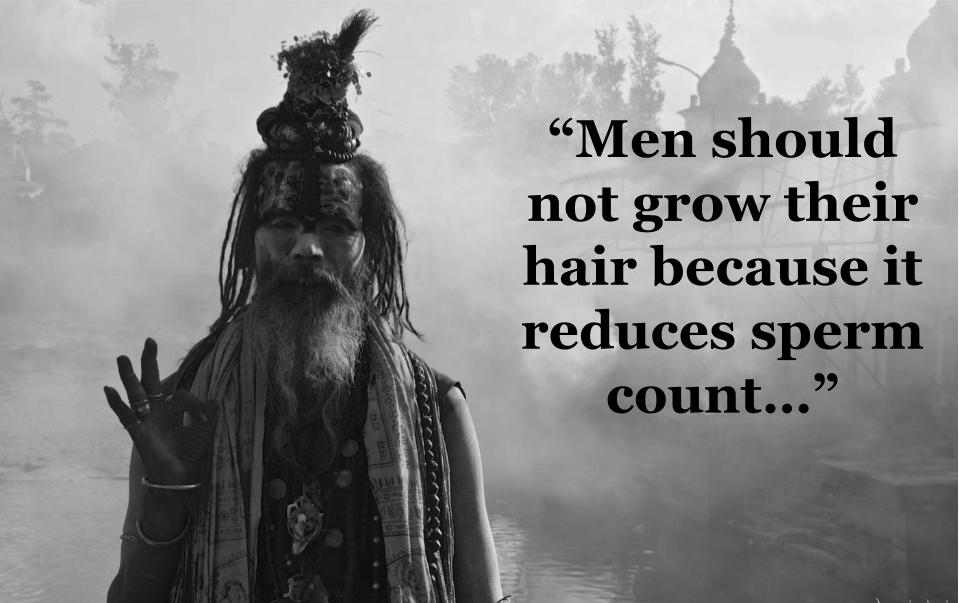 In July, an article published on the website of Sanatan Sanstha, a Goa-based religious outfit whose members are accused of killing Communist leader Govind Pansare in February this year, warned men against growing their hair. The article says, “…long hair symbolizes fickleness, there is emission of Raja-Tama waves, thus polluting the environment. This denotes distress due to negative energies… Due to contact with Raja-predominant waves emitting from hair, the suryanadi (Sun channel) remains constantly active; this produces heat in the body which keeps spreading in the body, resulting in reduction in the sperm count.” 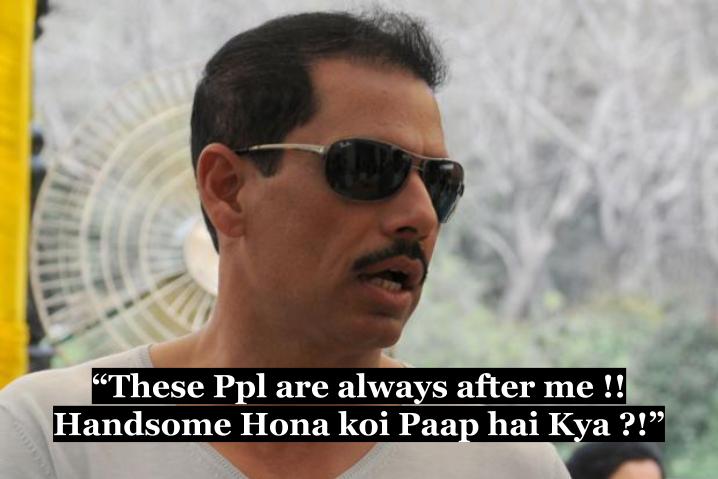 In July, Robert Vadra took to Facebook to criticise the ruling BJP. Along with a photo of himself, Vadra posted, “Parliament begins and so do their petty diversion political tactics... People of India are not fooled. Regret to see India Led by such so called leaders !!”

The post below that one was even more bizarre. "These Ppl are always after me !! Handsome Hona koi Paap hai Kya ?!" Vadra had posted. 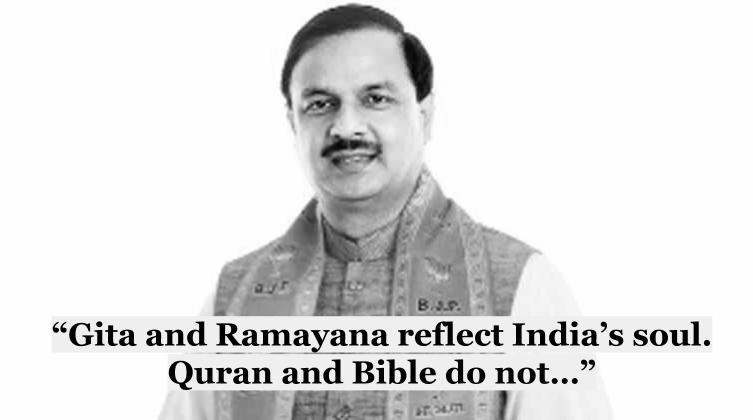 In September India’s Minister of State for Culture and Tourism (stress on the word culture) Mahesh Sharma said that whilst Hindu epics like the Ramayana, Mahabharata and Gita should be compulsory reading in schools, the Quran and Bible can be skipped over since they are not essential to the soul of India.

"Gita and Ramayana reflect India's soul. But we also respect Quran and would include best thoughts from it. I respect Bible and Quran but they are not central to soul of India in the way as Gita and Ramayana are. As India's cultural minister, I recommend that Ramayana and Gita should be part of our school curriculum and I am working extensively with HRD Minister Smriti Irani towards this," Sharma said in an interview with a leading news channel.

The great culture minister didn’t stop here. He said that students should learn Hindi and Sanskrit before they learn any other language. "Hindi is our national language and should be made compulsory in all schools,” he said (move over Tamil, Marathi, Gujarati, Punjabi, Bengali, … the list goes on).

Sharma also took a hit at the polluting influence of “western culture” saying that he was working toward protecting Indian “culture” from it. "Culture defines a nation. The time has come to win back our culture from the negative influence of Western culture. In our culture women of three generations cook food in the same kitchen... in Europe, a 16-year-old leaves home," Sharma said, adding that "Westernisation in the name of modernity is not right. We have to protect Indian culture as it is the wealth of the country and our identity.”

The culture minister had words of wisdom to share on recent government diktats that have been criticised by many, such as the compulsory meat ban and the renaming of Aurangzeb road. "The Maharashtra government banned it only for four days for Jain sentiments. The Centre will take a call on banning meat during Navratra. It will be a political decision. We would want that. If the sacrifices of a few help maintain the religious sentiments of a section of society, there is no harm in doing this," Sharma said, in a statement that just put religious sentiment at the centre of our supposedly secular polity. On renaming Aurangzeb Road, Sharma echoed his agreement saying, "Aurangzeb was not an inspiring historical figure. I agree with the decision to change the name of Aurangzeb Road after the legendary scientist and former President.”

Sharma has demonstrated his position in other interviews as well, telling The Telegraph that Indian culture is defined by three generations cooking in the same kitchen and eating on the same table; the relationship between parents and children and the respect they have for each other; the emotions Indians have for each other and the relationships they respect; (Indian) values and books should be read before you read novels; and that before youth go to gain wisdom from Thailand, Dubai and Singapore, they must gain wisdom from our own museums and heritage.

In an interview with The Indian Express, Sharma said that cultural pollution can be understood as follows: “Suppose, we teach in Hindi and say ‘G for Ganesh’, then we become ‘non-seculars’ and are blamed for saffronisation. But if we say ‘G for gadha’, then we are secular. This is not fair.”

He also added that there was nothing wrong with saffronisation, because the Indian people had voted the BJP into power and had hence given saffronisation their political mandate (I thought we were voting for development?!).

Sharma also admitted that the move to question the appointment of Nehru Memorial Museum and Library director was a reaction to the Congress protesting the “saffronisation of the NMML” as the BJP government seeks to change the name of the institution. "We knew about Rangarajan's appointment for more than a year," Sharma said. "But had Congress not said anything about our government saffronising NMML, we would not have reacted. We are not unethical, Congress is,” Sharma has been quoted as saying. 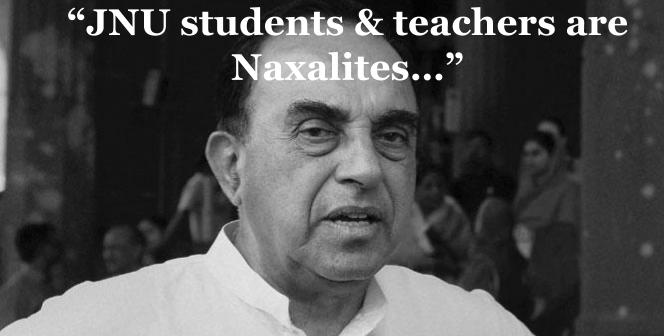 In September, BJP leader Subramanian Swamy courted controversy for calling JNU students and teachers Naxalites. Swamy, who was rumoured as being considered for the post of VC of the institution, took a jibe at India’s first Prime Minister as well, saying, “ have recommended the renaming of JNU after Subhas Chandra Bose. Bose was far more educated than Jawaharlal Nehru." 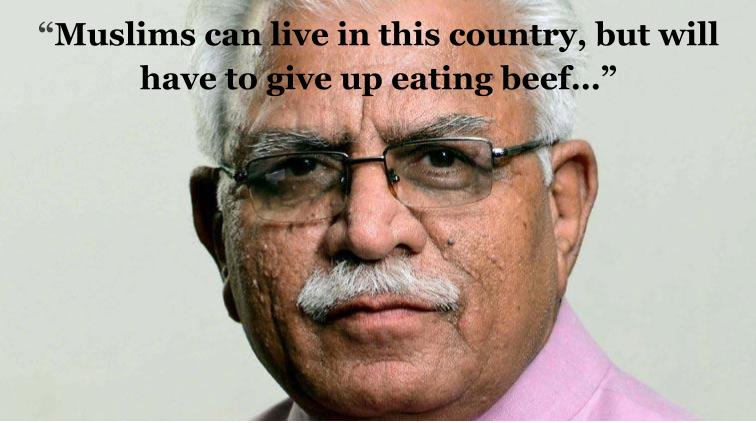 Haryana Chief Minister Manohar Lal Khattar joined the beef controversy in October by saying that the Muslim community needed to give up consuming beef in order to continue living in India, since the cow was an 'article of faith' for the majority. He said it was not written anywhere that Muslims and Christians had to eat beef. Khattar said that the Bhagvad Gita and Saraswati were articles of faith in the Hindu-majority country and that the minorities must not violate their religious beliefs. On Dadri he said the lynching was an incident of misunderstanding and both sides had committed wrongs. He also said that democracy had freedoms, but those freedoms had limitations and if eating beef hurt the sentiments of another community, even constitutionally one could not do it since the Constitution stipulated that one could not do something that offended others. 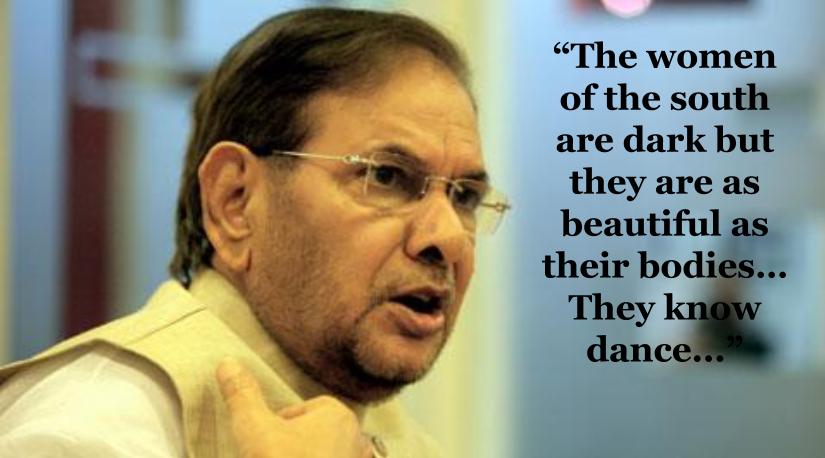 In March, while debating the insurance bill in the Rajya Sabha, JD(U) leader Sharad Yadav said, “The women of the south are dark but they are as beautiful as their bodies…We don’t see it here. They know dance.” 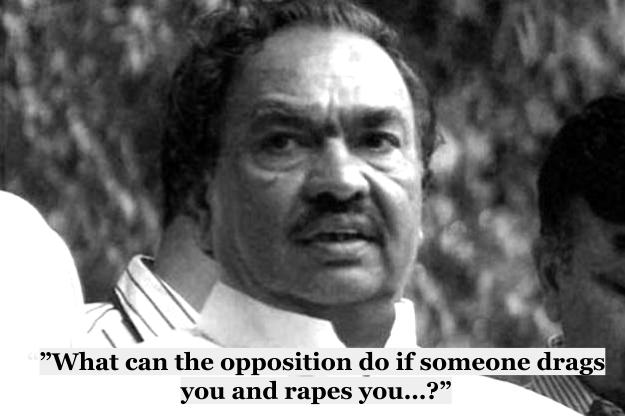 BJP lawmaker and leader of the opposition in the Karnataka Legislative Council, K.S. Eshwarappa courted controversy in October, when he responded to a question by a journalist on whether the opposition had failed its duty in holding the government of Karnataka accountable for violence against women.

"You are a woman, you are here now, if someone drags you and rapes you, we opposition people will be somewhere else. What can we do?", Eshwarappa said.

The BJP leader’s controversial statements come as violence against women is on the rise in Karnataka. In a recent incident, a 20-year-old woman from Mysuru was allegedly gangraped by four men on October 9.

Shocking as the comments may be, this is not the first time the BJP leader has made controversial statements regarding women. Last year, Eshwarappa was at the centre of a storm after asking Chief Minister Siddaramaiah and Home Minister K J George if they will have feelings for victims of sexual assault in the state only if their daughters are “raped.” 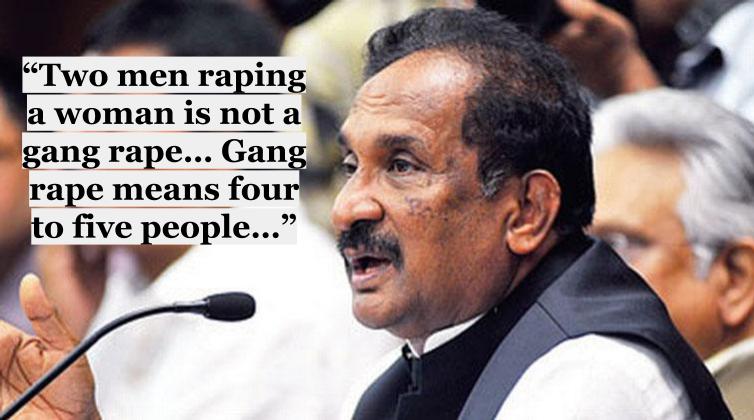 The recent comment came shortly after KJ George, Minister of Home for the state of Karnataka, kicked up a storm by implying that two men raping a woman can not be called a gangrape. "How can you say gangrape? Gangrape means four-five people," George said in response to a question on the rape of a 22 year old BPO employee in the state.