62 Of The Super Rich Have Half The World's Wealth

NEW DELHI: Just 62 of the richest people have the same amount of wealth as half of humanity, reveals a new Oxfam report. To put it in perspective, the equivalent of the wealth of half the world -- i.e 3.5 BILLION people, can squeeze together in a single double decker bus (not that the 62 people in question would ever need to step foot onto a bus).

The report, titled An Economy for the 1%, shows that the wealth of the poorest half of the world’s population has fallen by a trillion dollars since 2010, a drop of 41 percent. This has occurred despite the global population increasing by around 400 million people during that period. Meanwhile, the wealth of the richest 62 has increased by more than half a trillion dollars to $1.76tr. The report also shows how women are disproportionately affected by inequality – of the current ‘62’, 53 are men and just nine are women.

Although world leaders have increasingly talked about the need to tackle inequality, and in September agreed a global goal to reduce it, the gap between the richest and the rest has widened dramatically in the past 12 months, Oxfam says. The organisation’s prediction, made ahead of last year’s Davos, that the 1% would soon own more than the rest of us, actually came true in 2015 - a year earlier than expected. 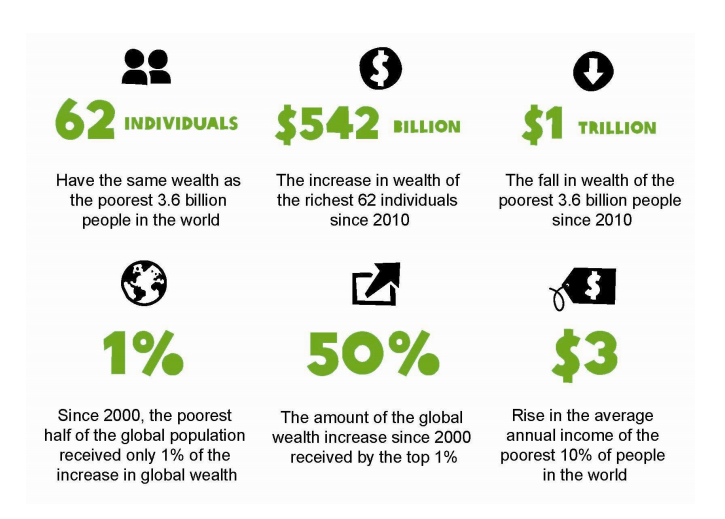 Winnie Byanyima, Oxfam International Executive Director, who will again attend Davos having co-chaired last year’s event, said: “It is simply unacceptable that the poorest half of the world’s population owns no more than a few dozen super-rich people who could fit onto one bus.

“World leaders’ concern about the escalating inequality crisis has so far not translated into concrete action – the world has become a much more unequal place and the trend is accelerating. We cannot continue to allow hundreds of millions of people to go hungry while resources that could be used to help them are sucked up by those at the top.

"I challenge the governments, companies and elites at Davos to play their part in ending the era of tax havens, which is fuelling economic inequality and preventing hundreds of millions of people lifting themselves out of poverty. Multinational companies and wealthy elites are playing by different rules to everyone else, refusing to pay the taxes that society needs to function. The fact that 188 of 201 leading companies have a presence in at least one tax haven shows it is time to act."

In 2015 G20 governments agreed steps to curb tax dodging by multinationals through the BEPS agreement, however these measures will do little for the poorest countries and largely ignore the problems posed by tax havens.

Globally, it is estimated that a total of $7.6tr of individuals’ wealth sits offshore. If tax were paid on the income that this wealth generates, an extra $190 billion would be available to governments every year.

As much as 30 percent of all African financial wealth is estimated to be held offshore, costing an estimated $14 billion in lost tax revenues every year. This is enough money to pay for healthcare for mothers and children in Africa that could save 4 million children’s lives a year, and employ enough teachers to get every African child into school. 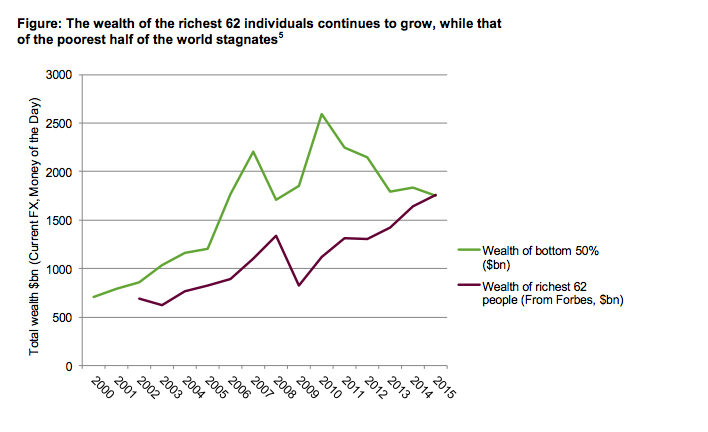 Nine out of ten WEF corporate partners have a presence in at least one tax haven and it is estimated that tax dodging by multinational corporations costs developing countries at least $100 billion every year. Corporate investment in tax havens almost quadrupled between 2000 and 2014.

Allowing governments to collect the taxes they are owed from companies and rich individuals will be vital if world leaders are to meet their new goal, set last September, to eliminate extreme poverty by 2030.

Although the number of people living in extreme poverty halved between 1990 and 2010, the average annual income of the poorest 10 percent has risen by less than $3-a-year in the past quarter of a century. That equates to an increase in individuals’ daily income of less than a single cent a year.

Had inequality within countries not grown between 1990 and 2010, an extra 200 million people would have escaped poverty.

One of the other key trends behind rising inequality set out in Oxfam’s report is the falling share of national income going to workers in almost all developed and most developing countries and a widening gap between pay at the top and the bottom of the income scale. The majority of low paid workers around the world are women.

By contrast, the already wealthy have benefited from a rate of return on capital via interest payments, dividends, etc, that has been consistently higher than the rate of economic growth. This advantage has been compounded by the use of tax havens which are perhaps the most glaring example set out in the Oxfam report of how the rules of the economic game have been rewritten in a manner that has supercharged the ability of the rich and powerful to entrench their wealth.

Byanyima added: “The richest can no longer pretend their wealth benefits everyone – their extreme wealth in fact shows an ailing global economy. The recent explosion in the wealth of the super-rich has come at the expense of the majority and particularly the poorest people."

Oxfam has calculated that:

3. Meanwhile, the wealth of the bottom half fell by just over a trillion dollars in the same period – a drop of 41%.

4. Since the turn of the century, the poorest half of the world’s population has received just 1% of the total increase in global wealth, while half of that increase has gone to the top 1%.

5. The average annual income of the poorest 10% of people in the world has risen by less than $3 each year in almost a quarter of a century

You can read the full report here: